Working with a very familiar and very capable camera along with the new(ish) Sigma 24-70mm f2.8 DG DN zoom lens. 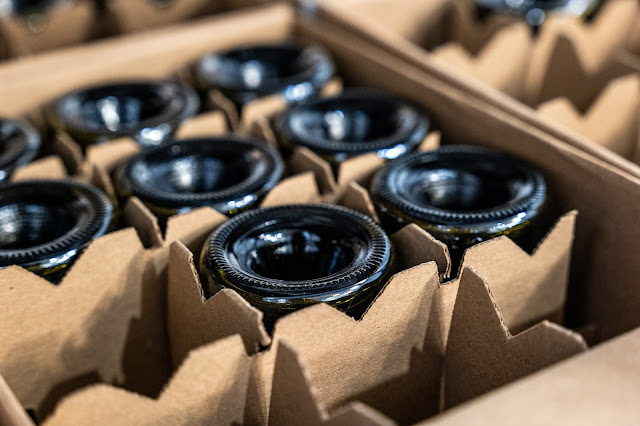 I've spent a lot of time playing with the Leica cameras I've been buying lately but when confronted with a commercial job that is more "fast moving" (frenetic/scheduled/collaborative/client driven) than my usual photo walks I was tempted to shoot with the Leica SLs but at the last minute opted for the comfort and familiarity of using the Panasonic S1 for photography and the Panasonic S1H for video. I write a lot about becoming deeply familiar with your camera gear and how the familiarity allows for a quicker and more fluid approach to the process. Since I've owned the S1 series cameras all the way back to Fall of 2019 (almost a record for VSL camera retention...) I've shot tens of thousands of frames and processed nearly the same amount. And when it comes to video the S1H is the de facto gold standard for a capable, one person crew's video camera.

Unlike past projects I actually packed minimally for a full day of photographing at three different wineries in central Texas. There was no question in my mind that the video "rig" would be minimal and would be assembled to give me the maximum amount of shooting flexibility and the most extreme amount of image stabilization possible. When considering my options the combination of the S1H with the Panasonic 24-105mm f4.0 lens made the most sense. The lens is a very good performer at all focal lengths, even when used at a wide open aperture. But the coolest thing for me when shooting run-and-gun b-roll is that the combination of camera and lens I.S. gives me up to 6.5 stops of useable stabilization. Handle holding without messing around with a gimbal is the benefit. The regular image stabilization is great but if you are doing a handheld version of a "locked off" shot (no camera moves) you can turn on "Boost" I.S. in the camera and you get tripod like performance. It's pretty amazing. Turn it off if you plan to pan or you'll see motion artifacting...

We weren't interested in doing video interviews or anything else that would require great sound; in fact, the audio will likely be stripped out entirely and replaced with music and sound effects, so no external microphones were used. Nice to have one less criteria to worry about for a change.

The lens and body combination are rock solid and heavy but they were a nice balance on one shoulder to offset the S1 body and Sigma 24-70mm lens on the opposite shoulder.

Someone wrote in to ask me, "Why did you buy yet another normal zoom? Can't you make up your mind and just choose the best one? You just like gear too much!"

I can't argue with the last point; I do like to have the right gear at hand. But why another zoom? I think I just explained it in the paragraphs above. But let me simplify...

I'm using two cameras all day long. One is set up for stills and one is set up for video. Each needs a lens and the last thing I want to do is change lenses out in dusty fields with wind and all kinds of airborne stuff floating around. The logical thing, if you are interested in keeping garbage off your camera's sensor is to permanently attach a lens to each camera in the relatively clean environs of your own environmentally managed studio space.

Then there is the question of outfitting each lens for its particular use case. The photo lens was used often with a circular polarizing filter so that remained mostly attached to the Sigma. But the video lens needed a variable neutral density filter for all the outside video work. So that stayed attached to the 24-105mm lens.

You might have a lot of time to swap lenses and swap filters (even though the filter sizes are different between the two lenses) but commercial jobs move a bit quicker and, well, time is not just money, it's also opportunity. The fewer things you have to juggle the less energy you waste and the more you can concentrate on looking for and capturing good content. Right?

With all the cameras at my disposal I'm sure you might be curious to know why I selected the S1 for the photographs instead of one of the higher resolution cameras like the SL2 or the S1R. That's easy. I knew we'd be working in some darker areas like the wine cellar at a vineyard just north of Dripping Springs. The S1 makes very clean files all the way out to ISO 6400 and it does so reliably. It's better in a high ISO application than the higher res bodies. It also has a very low noise floor which allows for lifting the shadows in post without much artifacting or banding. That's a huge plus.

Another reason to use the S1 instead of higher res models is exactly about the difference between 24 megapixels and 47.5 megapixels. If most of the work will be reduced for use on the web or in brochures it just makes sense to choose a camera with a smaller file size to begin with. 24 megapixels seemed just right to me.

As a side note, I went back again yesterday to one of the wineries to get some more people shots and opted to take the Leica SL twins this time instead. The files from the S1 are slightly less noisy at higher ISOs but not by much. And I like the look of the color I get from the Leicas for flesh tones so it's more or less a wash. Both do a great job but if I'm bringing along a Panasonic S1H to do video it's nice to have two cameras with nearly identical button placement, and menus. I'll most likely continue this commercial project through to August and will do so with the Panasonics ---- saving the Leicas for my own personal art work. And street photography.

The S1with current firmware is one of the finest working cameras I have ever used. The finder is on par with the finder in the Leica SL2, the colors are superb and the dynamic range is pretty amazing. I can over-expose raw files by over one stop and easily bring back highlight detail in post. I can lift shadows and the mid-to-lower tones with ease and not worry about increasing noise in files shot under ISO 1600. And most of the time the shadows I want to lift are in images shot outdoors with very low ISOs. The process of lifting shadows in a file shot at ISO 100 or 200 is almost invisible.

The Panasonic S1 series is so well built that I have no worries about dropping them onto the floor of the car and moving on to the next location. They never overheat and, more importantly, they handle heat generation so well that thermal noise never becomes the issue I see on other current cameras. A decided advantage when working in the hot Summer season.

The grip on the S1 is about as perfect as I could imagine on a camera, and the final feature I have to call out is the superb battery life I get when I use the appropriate power management menu tools.

I packed only three lenses for a full day of shooting last Friday. The 24-105 was dedicated to the S1H and that left me with the Sigma 24-70mm and also the Sigma 85mm f1.4 DG DN lens. The longer lens never came out of the rolling case. In a few situations I saw photo opportunities that would benefit from a bit longer lens but I knew that I could make commensurate crops and get very usable files without having to stop and reconfigure my camera.

In the past I would have always considered an f2.8 zoom lens only optically acceptable when starting at an aperture of f4.0. But with the Sigma I was seeing incredible sharpness, routinely, in files shot at the widest aperture and by midday I was comfortable shooting anywhere in the aperture range --- with reckless abandon. It's a sweet, sweet lens. I'm glad I bought one before Leica announced their 24-70mm (which is likely the same optical guts as the Sigma) because I'm a sucker for Leica's package design and would almost certainly have figured out how to justify getting pretty much the same performance by sacrificing $1600 more in hard cash.

After spending the weekend shooting both brands of full frame, 24 megapixel file, L-mount cameras I have to say that for commercial work I think I'll continue to prefer the Panasonic cameras for their raw functionality and the idea that if one is destroyed in the pursuit of a great, salable photo for a client, on a job, then I'll shed fewer tears. With the latest firmware for the S1 and the S1H they make a great, mostly interchangeable back up solution for each other when it comes to both video and regular photography. And their battery life is much better than the Leicas. When shooting longer term assignments little considerations like this are important.

But looking at the files side-by-side with the Leica SL output from yesterday the S1 and the SL both seem highly capable and neck-and-neck competitors, as far as image quality is concerned. And that's great.

But there is something about the Leica SL bodies that makes me want to shoot in a certain way. Not necessarily for client but just for my own interests. More experimentation is needed.

So, after a week of hard swimming, long heat acclimatization walks and two days of photographing around Texas in 100° heat I'm taking today off entirely. I've processed 1,800 raw files from the two camera systems and I'm in the process of uploading big Jpeg files to Smugmug.com to share with my clients. I made two perfect over easy eggs this morning and the most exhilarating cup of coffee you could imagine. I should have the galleries up by noon. After that the rest of the day is mine.

Maybe a walk and then a nap? Could be a good formula.