A New Rule I Just Made Up. If it's over 95° and I'm just shooting for fun the camera I bring along has to be small, light and preferably have a fixed lens. Sweaty hands are bad news for lens changes. 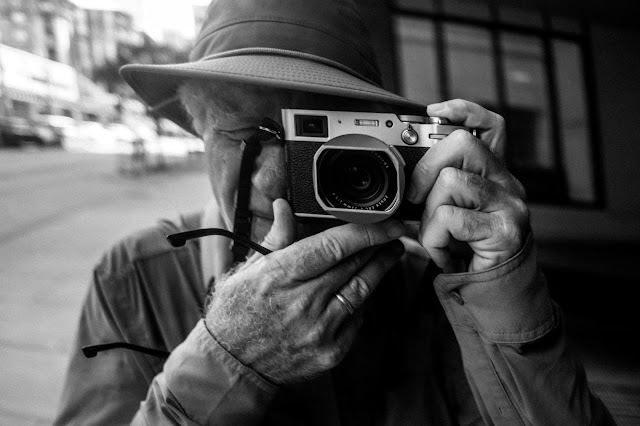 It seems like climate change is inevitable and the world is going to heat up whether we like it or not. Might as well dress for the worst and aim to carry a camera that won't sap your strength but will still deliver good photographs.
I headed out the door around 4 p.m. today to walk in the downtown area, which is already a heat sink. The phone suggested that the outside temperature was 97° but the "feels like" temperature was closer to 103°.
I don't recommend walking around in that kind of soup unless you've spent some time acclimating for it. It's the same logic that would tell us not to try going directly from sea level to Southern Colorado and trying to Summit a 14,000+ footer like Long's Peak the very next day. It might make more sense to get used to the altitude in stages.
And just like mountain climbing, when you are walking in bright, hot heat you might also consider paring down unnecessary stuff like camera bags, 70-200mm f2.8 zooms, giant, beefy cameras and so on. You'll go further if you go lighter.
Today the UV forecast was 11 out of 10. I chose to wear a long sleeve technical shirt from REI to keep the death rays of UV off my forearms. I put on sunscreen but....
I also wore a wide brimmed hat and took along a good pair of multi-coated UV proof sunglasses.
The hat is NOT a Tilley Hat. It's a Sun-Day Hat but it looks close enough to a Tilley Hat to cause at least some amount of embarrassment and shame. I lived through it by rationalizing that on days like today UV protection overrules fashion and, that I have never had to compound the shame by carrying a Billingham camera bag with me. That ensemble, and a pair of socks with some sandals, would just about do me in. Agoraphobia would descend upon me...and I would deserve it. (yes...I am fashion-shaming).
But all kidding aside, it was nice to have a small, light but potent camera with me on the walk. The chrome finish on the X100 made it even better. I'm off to the vineyards tomorrow. Finishing up a paying photo adventure. Have fun this weekend and stay away from the crowds. Don't be deplorable. 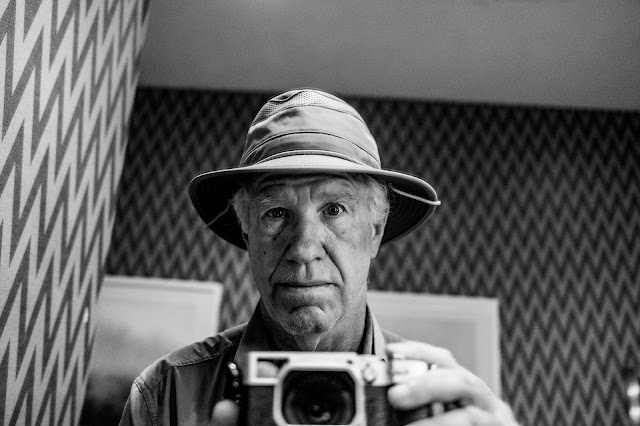 Photographers carrying their cameras with them everywhere is one of the bedrock traditions of the discipline and has been for decades and decades. You can't make a photograph if you can't be bothered to bring your camera. 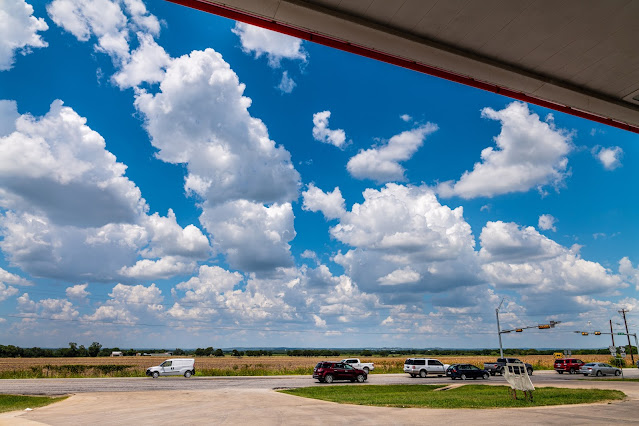 I was driving home from shooting an assignment out West of Austin. I stopped for gas. I turned around while the gas pump was draining my credit card and saw these beautiful and dynamic clouds. I grabbed a camera off the front seat of the car and shot off a few frames. I like this photograph very much.

It's hard to understand why people don't have a dedicated, carry anywhere camera. Hell, we've trained like 95% of the population to never leave their cellphone alone even for a second. One would think that people whose lives, passions and businesses revolve around making beautiful photographs would have at least one serious camera that they can hang over their shoulder or on a strap across their knee when sitting at the coffee shop or restaurant and be ready for opportunity. I've learned from experience that trying to recreate something you saw and didn't shoot in the moment is a futile exercise.

Bring a camera with you. You wear pants. You wear shoes. Maybe you wear glasses every day. So when you get dressed be sure to pick out a camera. Wear it proudly.  Nuff said.

A quick review of the Leica SL 24-90mm Vario-Elmarit after a day's use toiling in the fields of advertising. 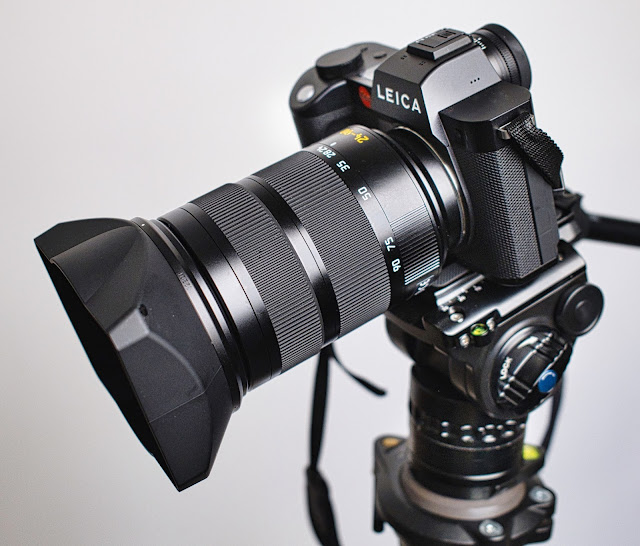 The Leica Vario-Elmarit 24-90mm zoom lens was one of the first of three lenses Leica delivered along with their original SL camera back in 2015 or 2016 (depending on whether you look at the first announcement of delivery or actually being able to get delivery...).

The lens was specifically designed for the shorter distance from the rear element to the image sensor in the camera and additionally was designed to deliver high performance results with the 24 megapixel sensor in that model. The lens is heavy, weatherproofed and features image stabilization. Leica's design goal was to create a standard zoom that would match or exceed premium, individual prime lenses at each focal length. It's performance has only recently been exceeded by a handful of primes and these are mostly the frightfully expensive Leica SL series prime lenses.

Roger Cicala of LensRental fame did a tear down of this lens and his statement (near the beginning of his article) of what makes a Leica lens different from the rest is a very interesting read: Here's is a snippet from Roger:

The 24-90mm contains 18 elements in 15 groups, similar to lenses like the Canon or Nikon 24-70 f/2.8 II lenses. It also contains 4 aspheric and 11 low dispersion elements, compared to 3 of each in the Nikon and 2 aspheric and 3 LD in the Canon. Additionally, the Leica has 6 different moving groups inside the lens, which is rather more complex than most standard range zooms."

One of the commenters, Heinz Richter, in the post comments also added this:

"Aspherical elements are very expensive to make, if they are individually ground from lens blanks, as is the case with all Leica lenses. Precision molding, as employed by Nikon only lends itself to certain types of glasses and conventional glass lenses with an acrylic aspherical surface added do have considerable drawbacks. This is a method first developed by Zeiss, but ultimately discarded because of too many ill side effects."

My experience with the lens is, as I've said, very short. I put it on the Leica SL2 and headed to Kerrville, Texas, which is two hours from Austin, yesterday to photograph the process of sorting and pressing grapes for wine-making. My brief as to shoot the process any which way I wanted to.
We were working under a high metal roof and in the fermenting station so there was ample light and I chose to work only with available light and to rely on the clean, high ISOs on the camera to get the photos I wanted.
I used the lens mostly at its maximum aperture except in situations where I thought I needed a bit more depth of field. I shot samples from 24mm all the way through to 90mm and at the widest aperture for each the sharpness was great. But it was the perfectly balanced contrast of the lens that I really liked. As far as I can see the 24-90mm is, optically, a perfect substitute for the best prime lenses. The only two provisos to that are that you won't like the lens if you need faster apertures/more speed, and you'll absolutely hate the lens if you mind heavy gear. But if that was the case you probably would have never ventured into the SL bodies anyway.
I hand-held the lens for about four hours yesterday and have suffered no ill effects today. No sore arm, no sore back.
The lens performs very well and focuses nice and quick on the SL2 body. I haven't tried it yet on the SL bodies but am hopeful that the performance will be similar. I would say that this is the only lens I need to take out into the field with me for most jobs but, as you know, I'm a bit paranoid about failures in the field and always take along a back up of each critical piece of gear. Yesterday, in addition to the system I'm writing about here, I also took along an SL body and the Panasonic 24-105mm zoom lens (which is a good lens as well). The cameras take the same batteries and the lenses offer the same basic coverage.
I thought to trade-in the Panasonic lens when I bought the Leica zoom but I remembered how often I want flexible, standard zooms on both a camera for video shooting and a camera for photographs and decided to keep the Panasonic for most of the video shooting I do. It's more than crispy sharp enough for anything I do in 4K video --- and beyond.
The Leica 24-90mm zoom is beautifully made and the lens hood is over-the-top big. The asking price is toasty high at $5600 but there are a number of them in the used market for anywhere from $3500 and up.
I preferred to buy a new one just for the warranty and the fact that I'm squeamish about spending over a certain amount on a lens without knowing how it was handled and stored before it came to me.
There is a lot of merit to wide-ranging, standard zoom lenses. Especially ones which perform like a bag full of German primes. But it's hardly game-changing. The Sigma 24-70mm Art lens is almost as good, optically, at one fifth the price and the same goes for the Panasonic 24-105mm. But, I figured if you are going to take the deep dive into the SL2 you might as well splurge and get an authentic Leica lens to pair it with. You only go around once. Unless you believe in reincarnation...
Posted by Kirk Tuck, Photographer/Writer at 13:33 3 comments:

A Few Reasons Why You Really Should be Swimming. Really. 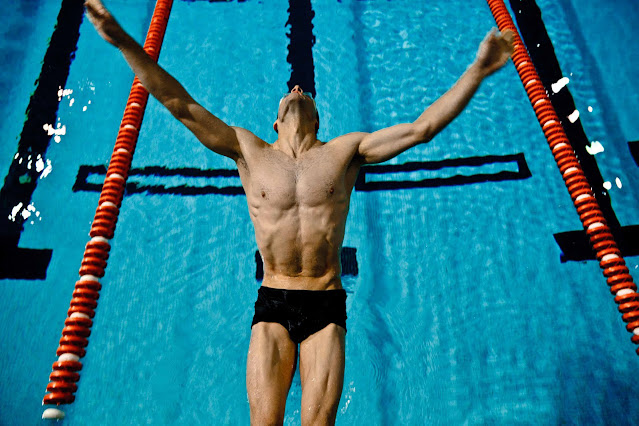 Just an hour a day. One less Netflix movie. One less (badly done and uninformative) YouTube photo "tutorial." One less session of online "research." One fewer shopping trips per day to your favorite online merchant. That's all you need.

Take a Leica with a 24-90mm lens along with you if you also want a weight intensive workout....