A deeper dive into our slide toward "medium format" digital cameras. Personally? I think we'd be better off buying better coffee... 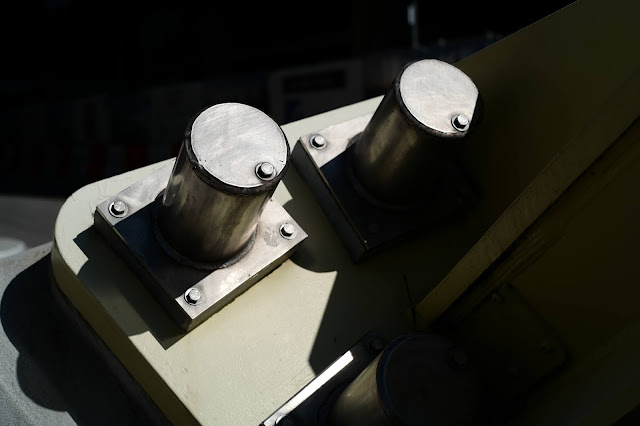 How much sharper does a camera have to get for images mostly shared on the web?
I see the current swell of excitement about Fuji's bargain priced quasi-medium format camera, the GFX50Sii, the same way I saw the excitement about Sony moving from a 42 megapixel file in their high-res camera to a newer version camera with 60+ megapixels. Mathematically it looks like we're getting big increase in overall sensor area here, over a 35mm frame, but if you look at it a different way you're only getting an increase of 20% on the long dimension of the frame. And that's just considering the size or geometry of the sensor.  If you compare a 35mm sensor camera of roughly the same resolution the only advantage might be that you'll get bigger individual pixels, which could give you a small advantage by giving you less noise at higher ISOs. An advantage that you'll give away by using slower lenses. Or smaller apertures on those lenses, if you are trying to match depth of field.

The disadvantage is that the particular sensor in the new Fuji MF camera is going on six years old and it seems that evolution is....evolving faster with the smaller sensors. Most of the consumer sensor R&D is aimed at cellphone camera sensors but a good amount is expended on the popular "full frame" cameras as well. Not so much with lower demand/low volume MF sensors. What this means is that the sensor in your latest and greatest sub-MF camera is probably at least a generation more advanced. Which probably means its output is faster so more processing can be done to the file in camera in the same length of time. This means less rolling shutter, faster frame rates, faster autofocus, better video features and file types, and maybe even cleaner high ISO files. And I'm not sure that the people who are hungry for a change to something "bigger" will see the benefits of their anticipated purchases. Other than a powerful placebo effect.

On the other hand, since I haven't handled the camera yet I can't discount that it may be amazingly well designed as far as how it feels when you hold it in your hands, or how wonderfully melodious the sound of the shutter firing might be. It may be that the camera has material benefits that transcend the technical specifications and that would be great. But in terms of delivering a knockout visual product that will put all 35mm type digital cameras back on their heels....I wouldn't count on it.

Much of this letting the air out of the balloon goes back to what many of us have been saying for years; that the average hobbyist rarely prints and even more rarely prints very large. Most professionals (less than 1% of the overall camera market; by far) are engaged in making images that will mostly go on websites and at best will end up in printed brochures. Even a double truck image, spread across two pages is only 11x17 inches at 360 dpi and is well handled by any camera with 16 megapixels or more. Go over 24 and you're tossing away tons of information in an attempt to gild lilies.

So unless you are serious enough about the advantages of medium format to get a camera with a much larger sized sensor; maybe 40 by 60mm at a minimum, you're probably chasing the same chimera that drives people to upgrade from 24 to 26 to 32 megapixels (regardless of format) which will mostly translate to....not much at all.

Here's the interesting part though. If we always have in mind comparing 35mm to  the 32 by 43mm of pixie-MF cameras we don't see much advantage; either to the overall look, at least as determined by physical dimensions or resolution, but if we look at the new MF cameras as adjuncts to non-35mm sized existing systems, and you happen to work primarily with micro four thirds cameras or APS-C cameras, then you will most likely see a much bigger comparative difference and that's a whole different ballgame. And maybe this is part of Fuji's strategy since they don't field a 35mm type camera right now.

Suddenly, if you've been shooting with an XT-3 or XT-4 or a G9 or GH5, you'll see a much bigger difference in "focus ramping" and other fun, discernible attributes that are more a result of size and geometry than the number or size of pixels on the plate. You have to make a big enough jump for the difference to make a difference.

Looked at this way we're right back to the film days when we shot sports and fast breaking events with our 35mm cameras and then turned around and used our Hasselblads and Rolleis for more measured and exacting work, like still lifes or setup tableaus in the studio; mostly under controlled light. Back then, of course, at a certain point, based on final print size or the need to control perspective, we ditched our cozy (and much bigger sensor sized...) medium format cameras and pulled out the really big guns. The 4x5 inch technical view cameras.

I venture to predict that we'll see the same falling out in digital. It's hardly impossible for a technical giant like Fuji to stitch together and sync four of the current sensors onto one circuit board/film plane and instantly increase both overall resolution of a system while quadrupling the total size. Then we've basically got a truly large format option. Put that super chip into a form factor that fits into a 4x5 view camera back and it's a whole new ballgame. This was actually done with scanning backs at the turn of the century!!!

We may even go back to something like a Canon R5 for sports and events (if they can keep their cameras from catching on fire), a Fuji pixie-MF for serious but slower work, as well as work destined almost entirely for print, and then a monster big digital back for large format. The choice when you need tilts and swings and endless enlargement-ability.

But as a substitute for an already extremely competent 35mm style camera (Sony A7RIV, Lumix S1R, Leica SL2, Nikon Z7, etc.) I just don't see the value proposition of the low cost Fuji at the moment. Maybe the Fuji 50GFX 50Sii is, to some degree, meant to be a backup camera for the GFXS100 but even that doesn't make a lot of sense.

All of this is not to say that I don't like the new camera or that I wouldn't, in a moment of weakness, rush out and buy one but in all honesty, when the GFX100S is only a couple thousand more dollars it makes a hell of a lot more sense to buy that one. You get more resolution, better AF, more video, etc. You can pretty much agree that most photographers who run out and buy the cheaper and less capable version will, in short order, have their eyes and their intentions locked on moving up the big brother and leaving a puddle of cash on the floor. Just sayin. Trading up is a favorite thing for retailers and a big hit to the wallets of photographers.

I think the next big thing will likely be faster and faster processors in cameras that look like the cameras we're shooting right now. The goal being to match the computational features we're getting used to with our phones. I got an eyeful of that using my iPhone for video on my recent wine project. For so many things the computational advantages of the phone video were mind-boggling. Just imagine the leap forward when this technology finally becomes common place in our regular cameras.