A Quick Trip to Llano, Texas to Photograph a Bridge and to Eat BBQ at Coopers. 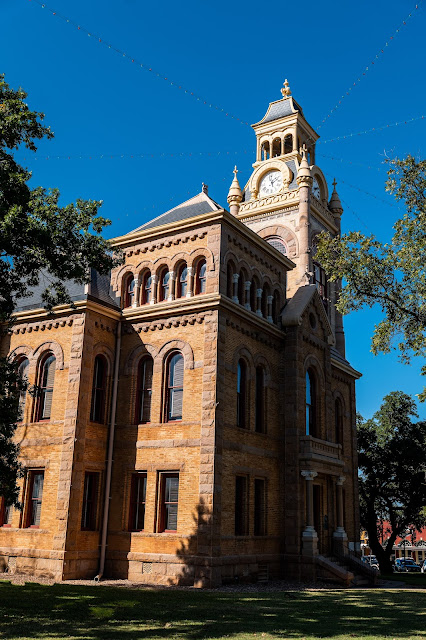 Every Texas County seems to have an historic courthouse.
Llano is no exception.
Swim practice was fun. The weather was beautiful. I just wasn't in the mood for another pensive walk through downtown Austin today. Instead I decided I'd drive somewhere close by and photograph something different. The last time I drove through Llano, Texas I noticed the big white, two lane bridge that joins the town on either side of the Llano River. I decided that would be a great "target" for today. The realization that Cooper's authentic, pit BBQ, one of the best in Texas, is also located in....Llano was pivotal in my decision making...
I packed light. Actually I more just grabbed a cap, a camera, and a lens and meandered out to the car. I'm using the Leica 24-90mm more and more often these days. Mostly because when I photograph something with that lens and a Leica SL I'm always a bit surprised and, sometimes, awestruck by the quality of the resulting photographs. I grabbed an 82mm circular polarizing filter on my way out the door but that just sat on the passenger's seat grumbling about my continuing lack of attention to its potential.
The route is straight out Highway 71, almost due West but a nod to the north as well. About an hour and 15 minutes at the posted speed limits. I made a quick stop by Trianon Coffee shop (right around the corner from the house) because no road trip starts or ends well without a to-go cup of coffee in the center console. Even better if it's Organic Columbian Supremo. Once I got that settled it was smooth sailing on what's becoming my favorite, fast paced, winding road.
I parked at the Llano courthouse and walked all over the place. I like the bridge a lot and shot way too many frames there but then, when you get back home, you can pretend that minute differences between frames might be important and that you should get that nose on the grindstone and trudge through everything...try to make it feel like a worthwhile ordeal.
After I really covered the river and the bridge photographically (and the bridge on foot)  I tossed in some portraits of downtown buildings just to round out the trip. Then I was off to Cooper's Pit BBQ. I got a third pound of brisket right off the pit. I also got just enough of their sausage to get a good taste. But not enough to overwhelm me on my trip back home. Cooper's is the real deal. No plates. No trendy decor. Just meat and a few sides. Beer in the cooler and your choice of sweet or unsweetened ice tea. As I left Cooper's I pledged to myself that the next three days would be filled with kale, broccoli, beets, and other tools of gustatory penance.
The Leica SL and the 24-90mm speak for themselves.... 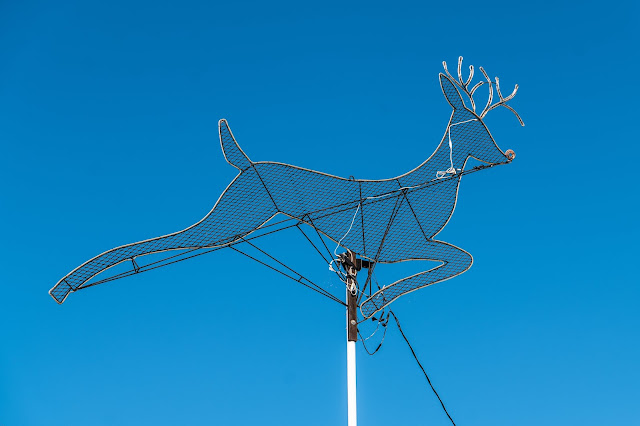 Getting ready for the holidays. 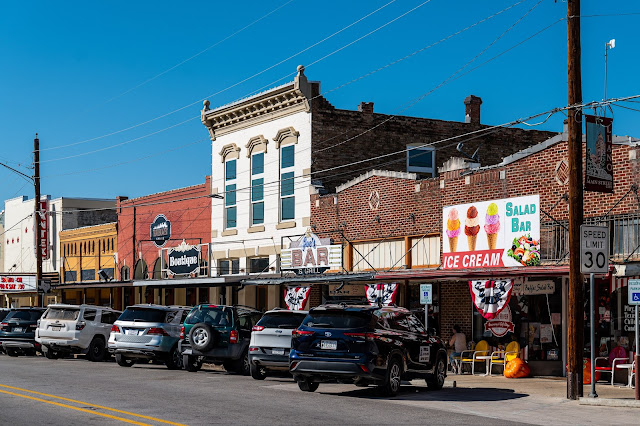 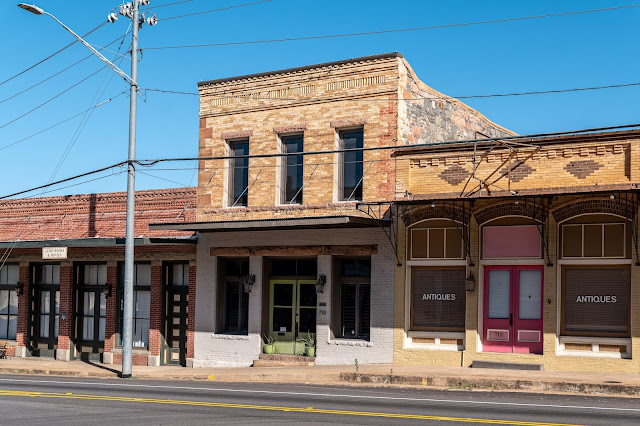 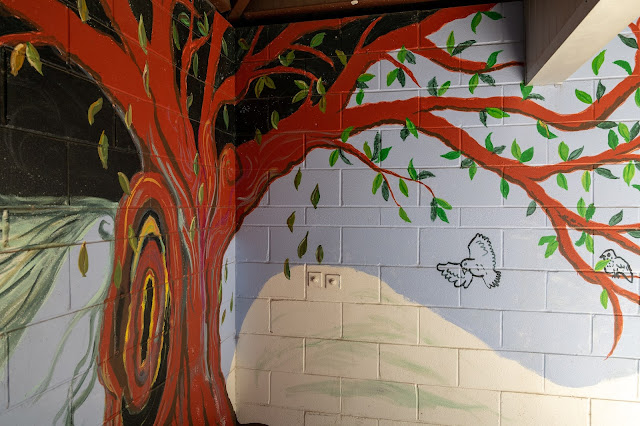 there is a park right to the East of the bridge. It's a small park but it has a public restroom.
A godsend for coffee addicted travelers. The restroom is nothing like the opulent private WCs of the W Hotel or the Four Seasons but....this one did have a very nice mural painted on the inside wall. 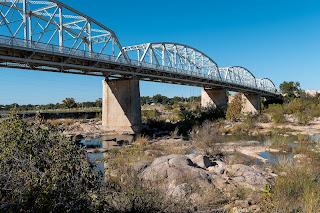 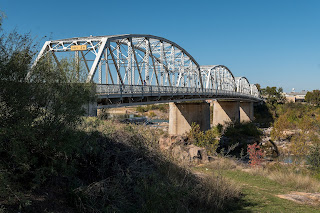 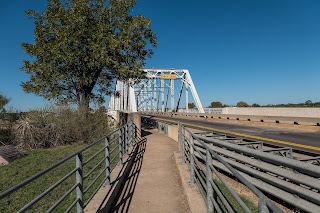 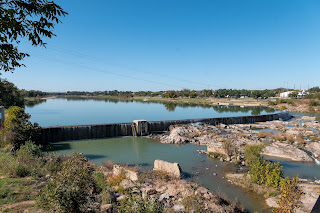 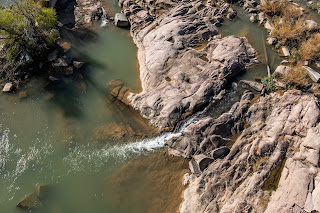 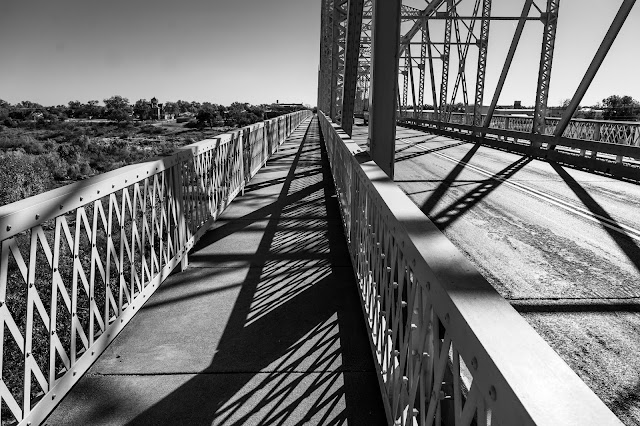 forgive me. I shouldn't mix and match styles, but I couldn't help it. I wanted to see how it looked in monochrome. I'm sure you did too.... 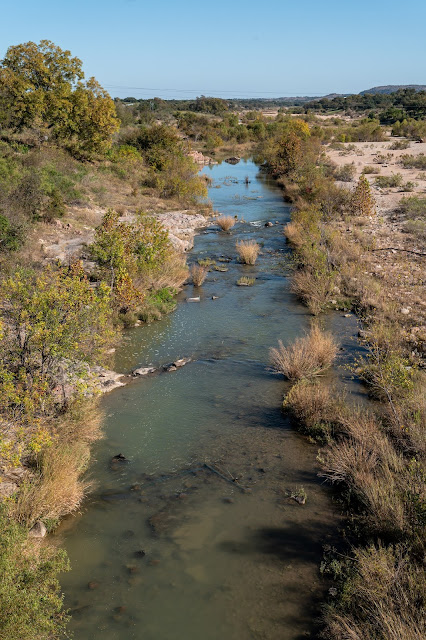 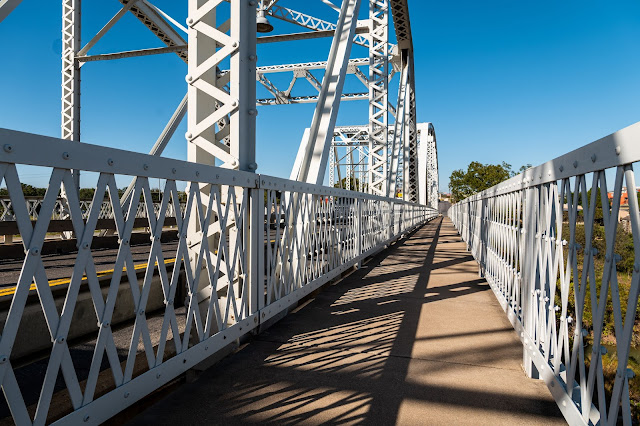 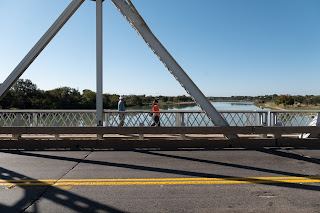 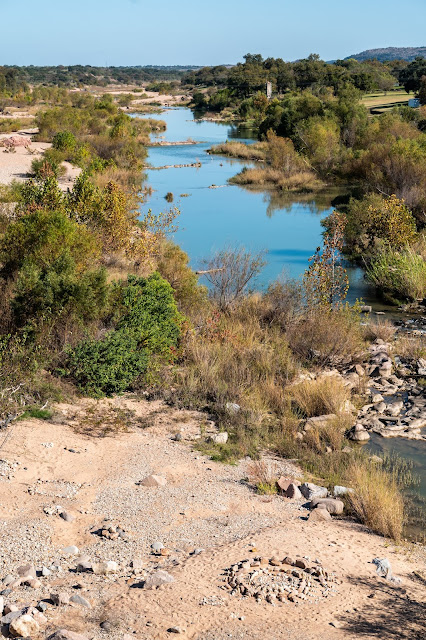 Note the Roswell-inspired crop circle/alien nautilus in the foreground.
Whatever could it mean? 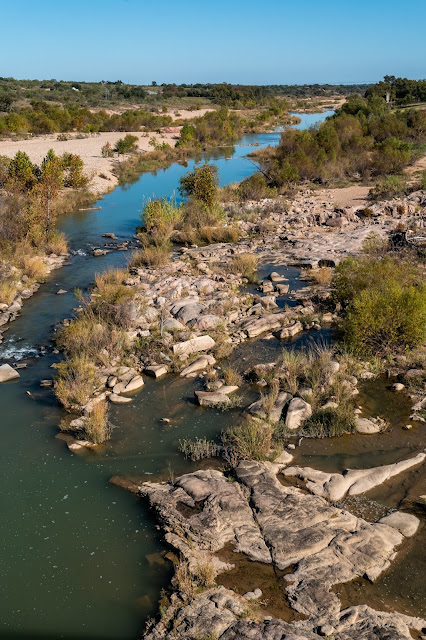 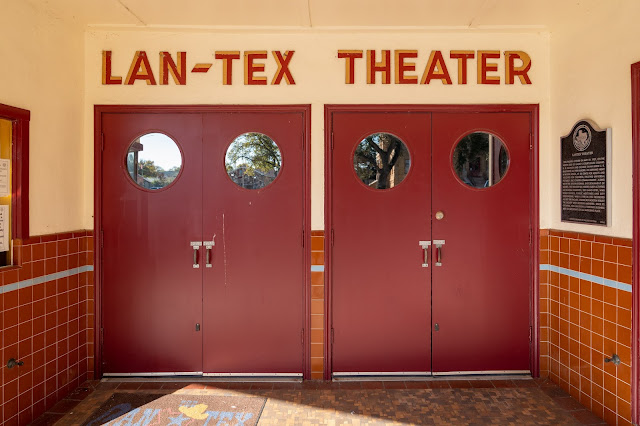 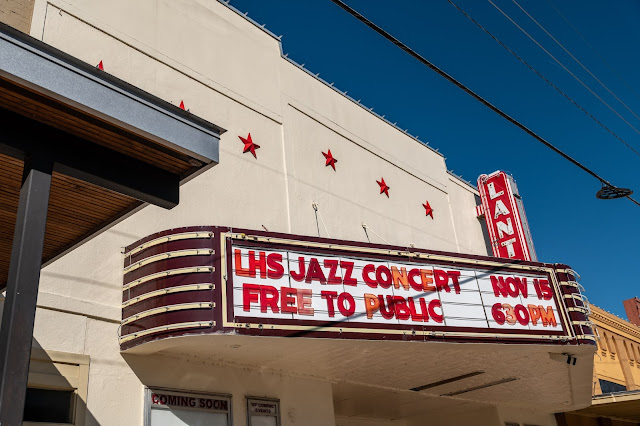 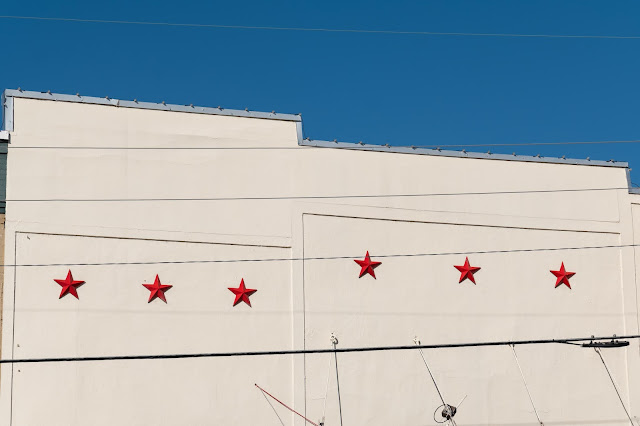 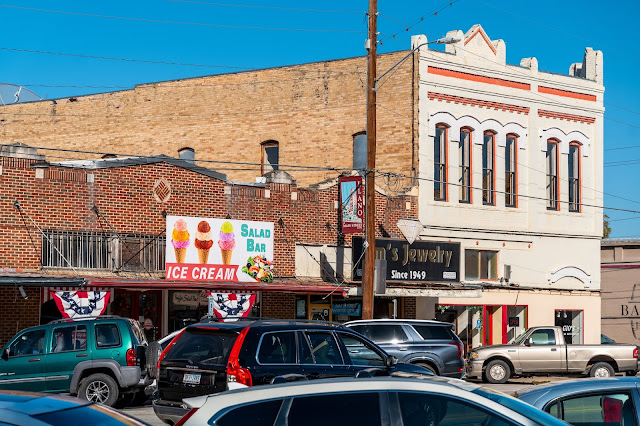 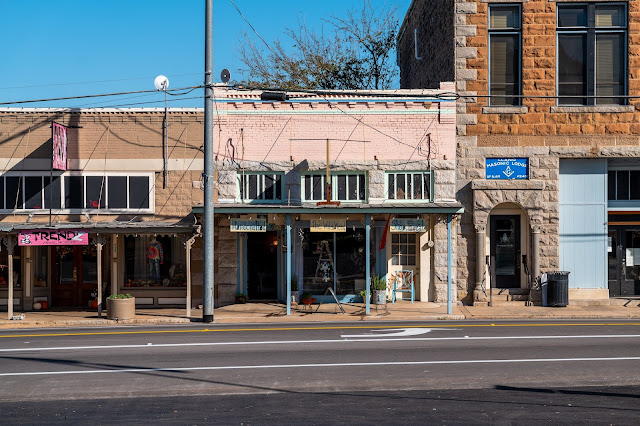 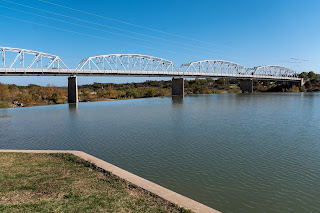 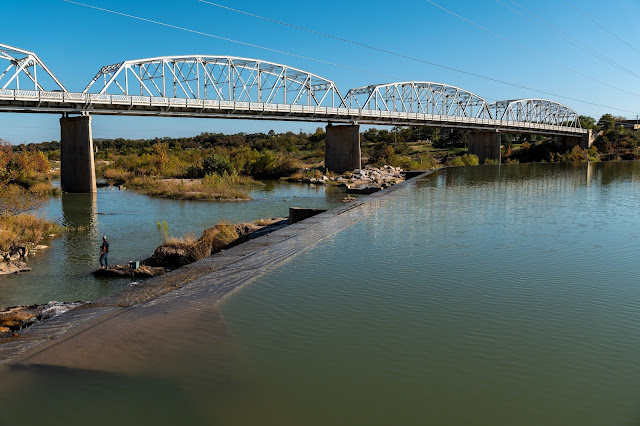 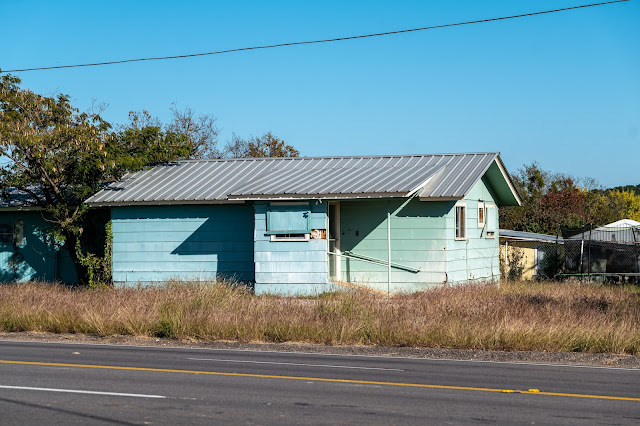 Saw this one on the way out of town.
Darn Leica SL. Way too much dynamic range.
I could barely get it all shoe-horned into this
8 bit Jpeg file I uploaded.
Drive home? Uneventful.
Welcome home? Three packages from Amazon.
Whatever could be in them???
Posted by Kirk Tuck, Photographer/Writer at 19:12 10 comments: