The very first lens I ever bought for an interchangeable lens camera. Somewhere back in the 1970s. Still works. 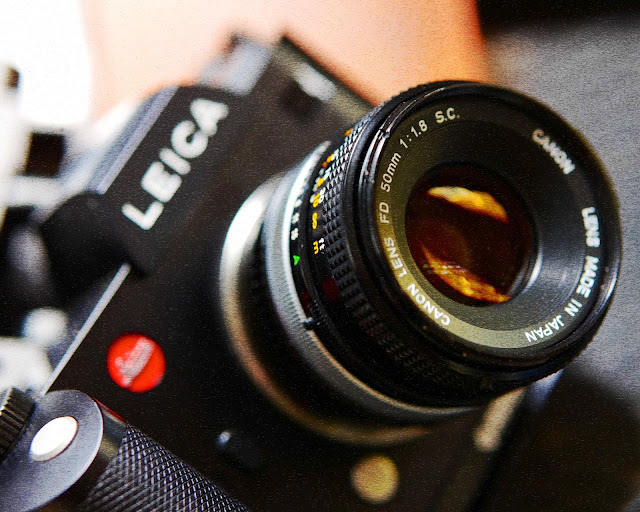 Back when I was a poor, poor student I worked part time at a "hi-fi" store that was situated at the bottom of a high rise dormitory just on the edge of the UT campus. The bottom two floors of the building were for retail and restaurants. Across the walk way from our hi-fi shop was Austin's preeminent camera store, Capitol Camera. They had all the good stuff. When I started working in the shop in 1976 everyone around me was also into cameras and photography. Really into it.

I'd been photographing with a Canon G3 QL17 and loved it but the path forward was obviously an SLR with a "real" lens on the front of it. I saved for months and months and bought the least expensive Canon SLR at the time. It was a Canon TX and it came in a kit with that 50mm f1.8 FD lens (above). The camera, lens and I were inseparable. Home-rolled Tri-X film from a bulk loader and a membership to the Ark Cooperative Darkroom rounded out the my early and long initiation into the wonderful world of photography.

The camera got traded in a long time ago. It was perfectly usable but pretty primitive. The top shutter speed of 1/500th of a second was the sticking point that moved me along to my next camera. I think that one was a Canon EF...

But the lens stayed around. This morning I put it on a cheap adapter and then onto a Leica SL camera. This puts me mostly back into all manual territory but with a few perks. One is that I can use the rig in aperture priority automatic. Another is that I can use auto-ISO. And the best perk is that I can magnify part of the frame for very accurate (manual) focusing. It's important to also know that you are always working in the stopped down mode with these adapted lenses. Whatever aperture is set on the lens is the aperture you are viewing and focusing with. But it's neither an impediment nor a blessing. It just is.

Even though this particular lens is about 46 years old the aperture ring works fine, the blades stop down correctly and the focusing ring is still mostly smooth and still pretty well dampened. The glass is clean and clear and the distance scale, even when the lens is used on an inexpensive adapter, is accurate.

In our current time when lenses have become huge and everyone seems obsessed with optical perfection it's a wonderful vacation to work with a "lesser" lens. But I don't mean to imply that there's anything wrong with the lens. Just that it only has six elements in five groups, there are only six aperture blades and they are NOT curved for bokeh enhancement. and the lens coatings are primitive when compared to current products.

If you have an interest in working with a vintage product like this you'll find zillions of them on the big auction site and generally there are always some available on KEH.com. Expect to pay less than $50 for all but the most exquisitely "mint" copies. In exchange you'll get a small, light, easy to handle lens that you'll want to stop down to about f 3.5 or f4.0 in order to get nicely sharp images. More aperture....up to f8.0 keeps improving the sides and corners and....adds to the already sharp central core of the images.

When I came back home from my exploration with this old friend I was so happy with the way it worked in the "field" and the way the images looked in Lightroom that I called my local camera merchant and asked my expert if they had any other Canon FD glass in their used inventory. I'm currently looking for three focal lengths. I'd like a 35mm f2.0, a 50mm f1.4 and any one of an assortment of 85-100mm lenses. As long as they work and the optics are good I'll take em.

Why? Because sometimes perfection isn't as perfect as it's cracked up to be. And most of these lenses are still very good performers with unique "fingerprints." Couple that with "smaller and lighter" and you have the winning formula for making the kind of images I like. Kind of consider it embracing "good enough" in trade for smaller, lighter and less stuffy.

By the way, the kid is doing well. Eating like a horse (I forgot that 26 year olds can really put it away...) and recovering quickly.

Here's some images from this morning: 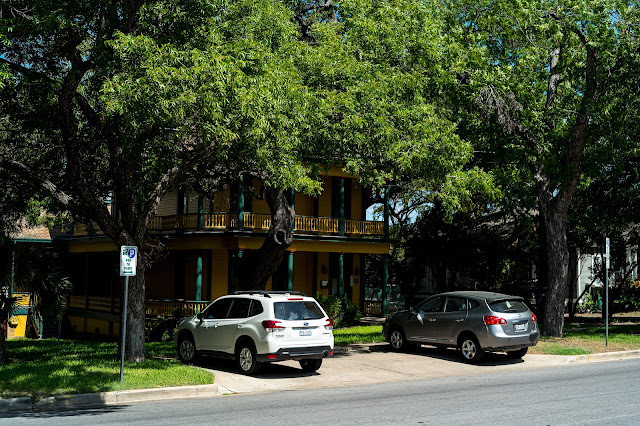 This is where I park when I go downtown. It's shaded from about 1pm onward.
It's on a quiet, non-residential street and it's in front of law offices, etc.
It's safe and I've never had to pay a meter there...
That white car is mine. 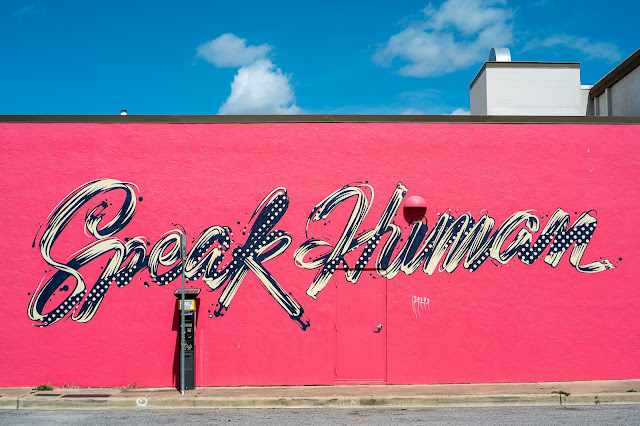 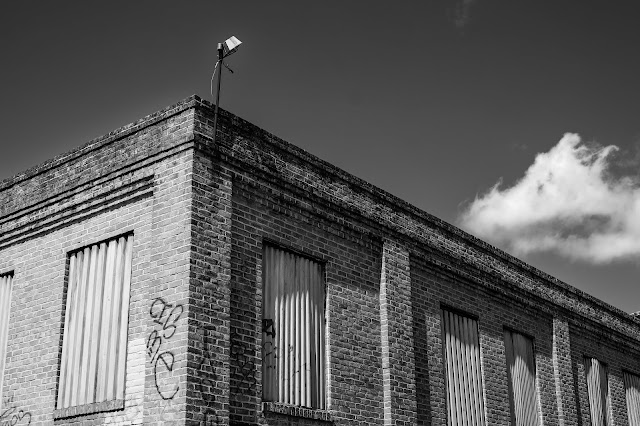 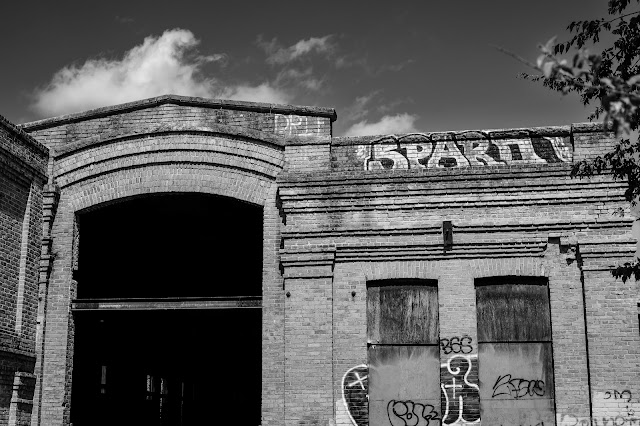 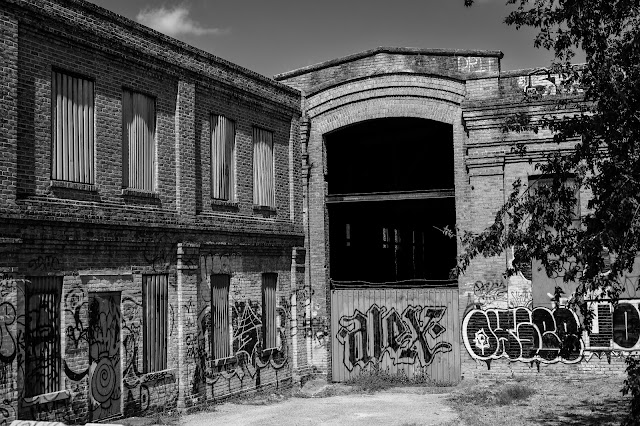 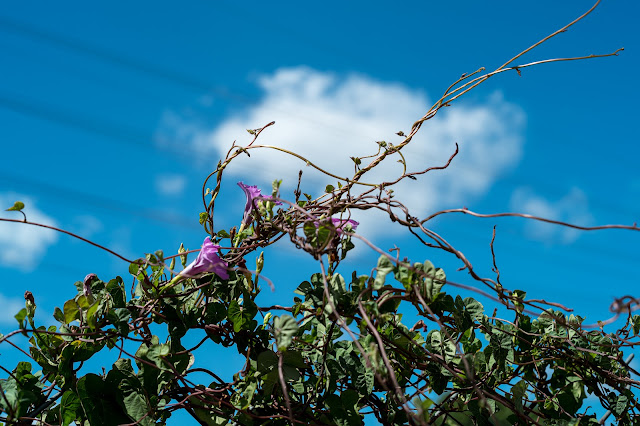 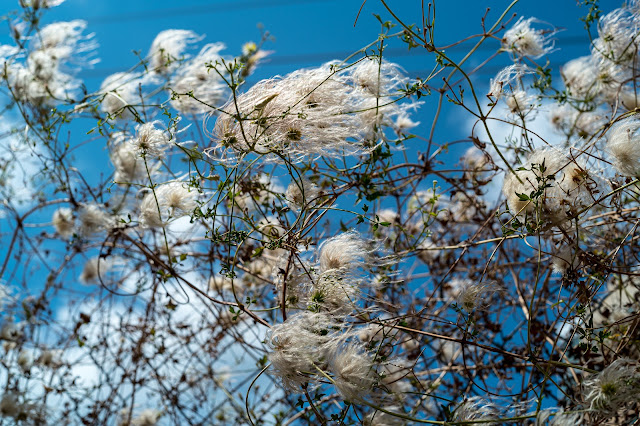 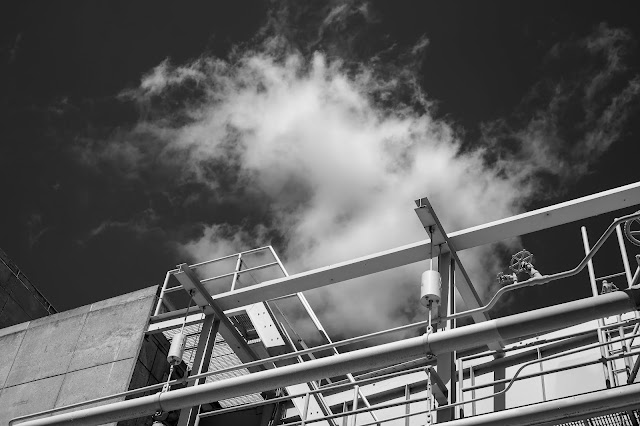 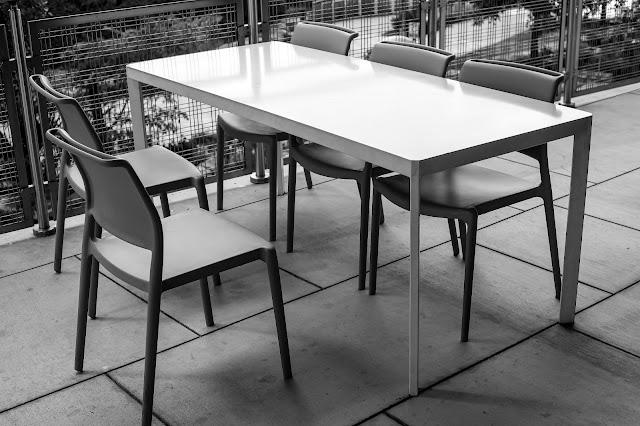 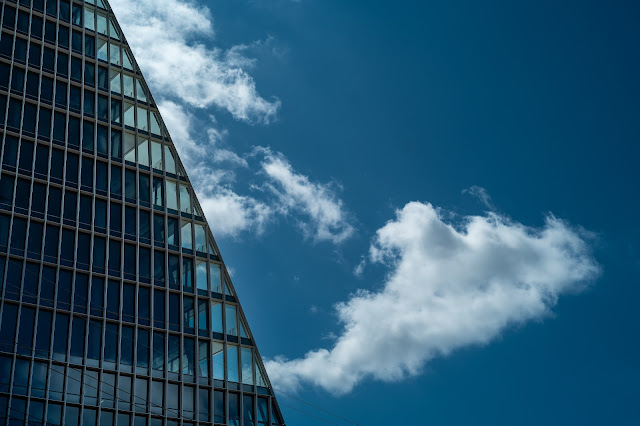 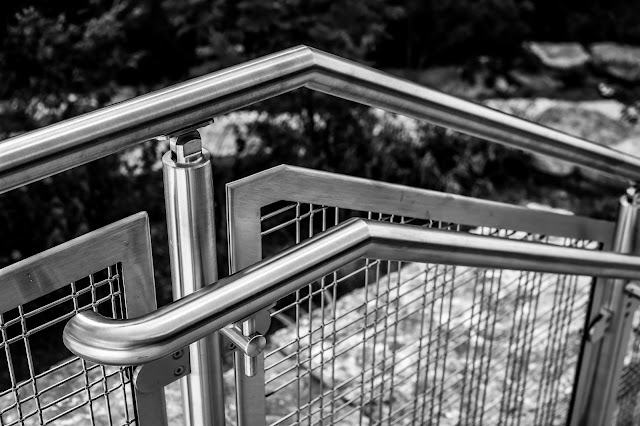 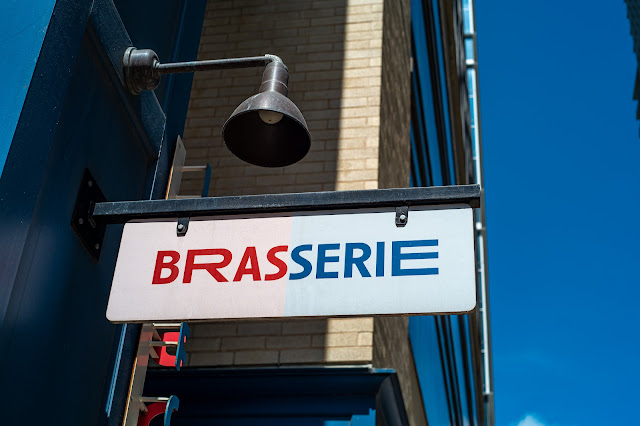 This place closed early in the pandemic (2020) and nothing has happened yet with the space.
I'm endlessly curious about it. It's a really nice restaurant and bar space... 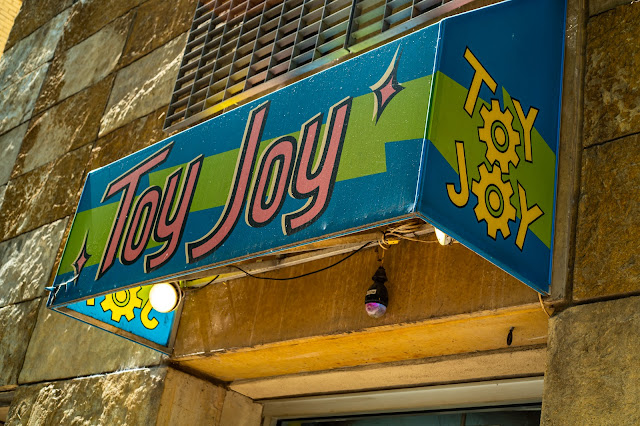 note the presence of direct light and no flare. Seems people could make
very satisfactory, cheap lenses even 46 years ago. 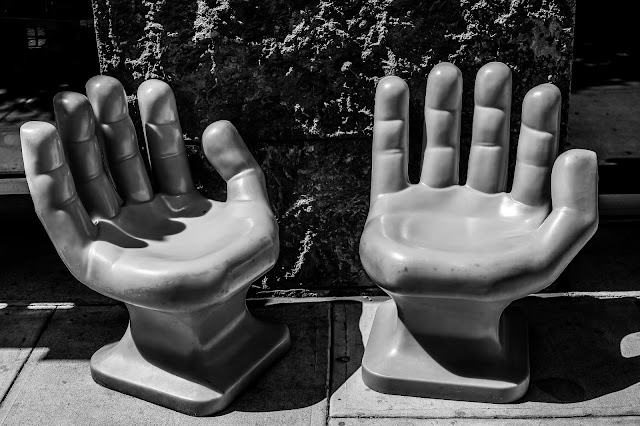 I like the black and white straight out of the Leica SL. It's nice. 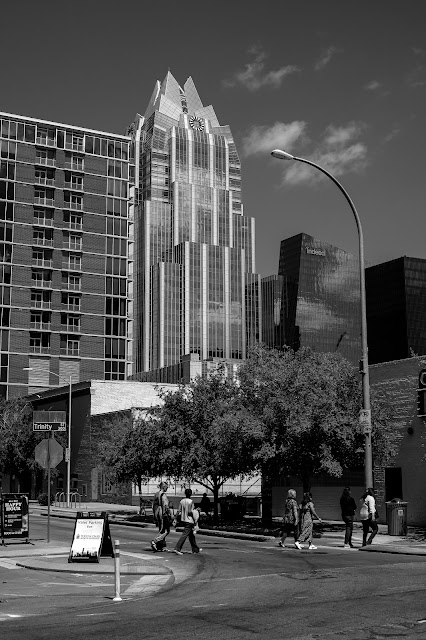 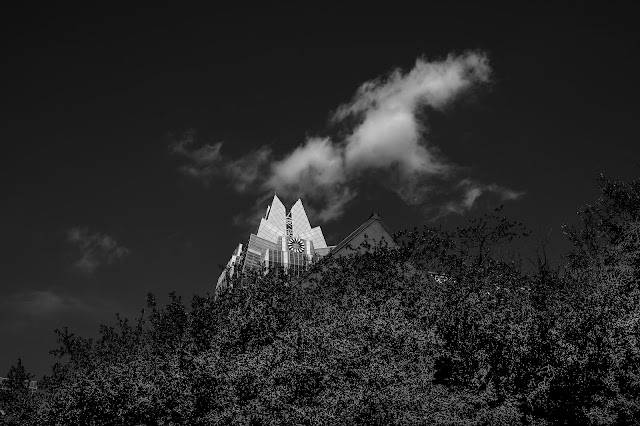 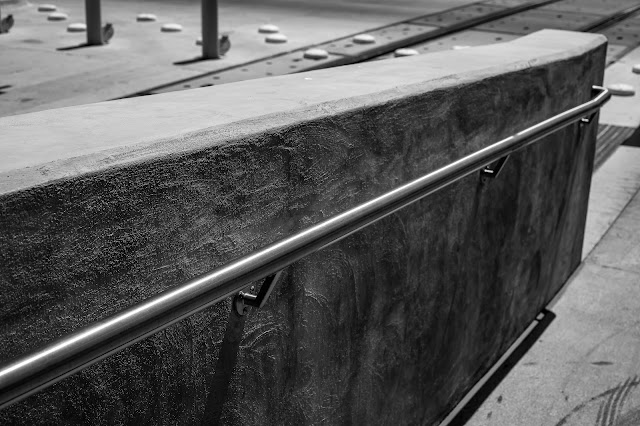 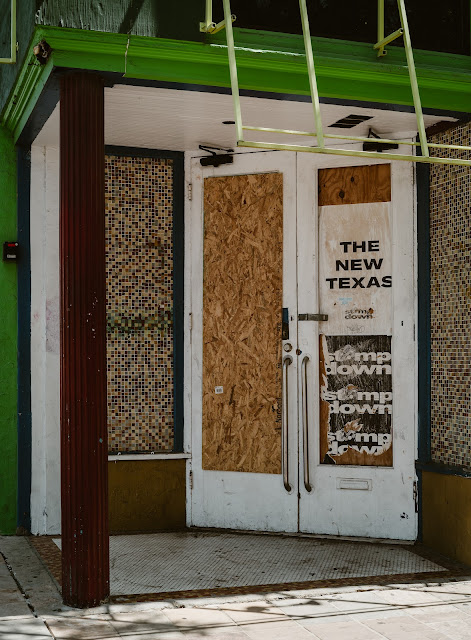 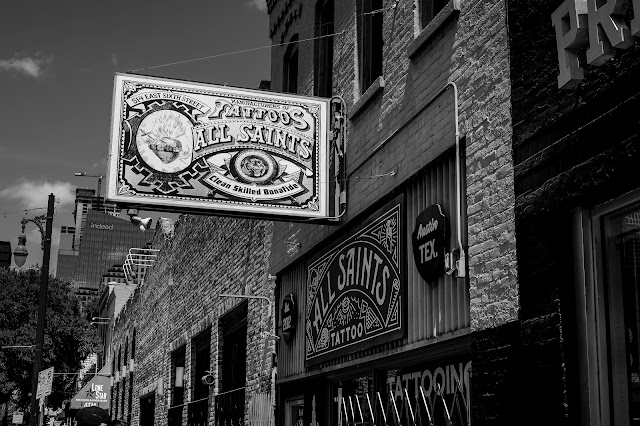 Plenty detailed. The lens has a decent ability to deliver resolution and sharpness when used
at f4.5 or f5.6. I'd use it to this day; even for work. 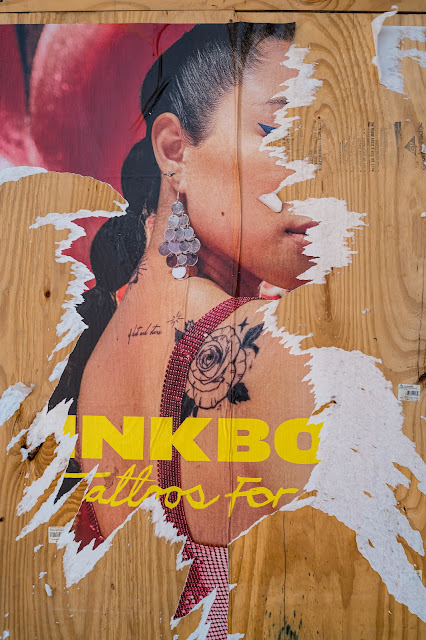 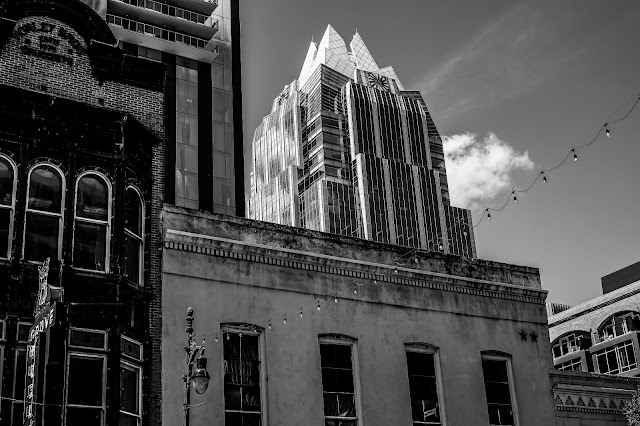 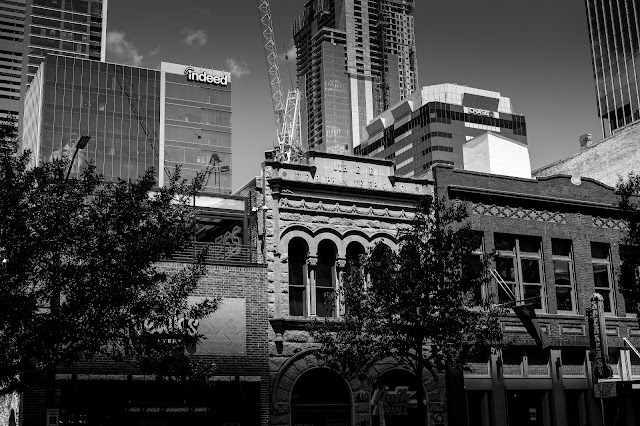 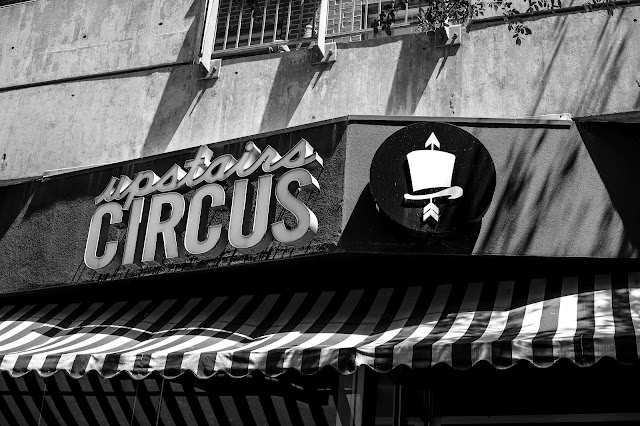 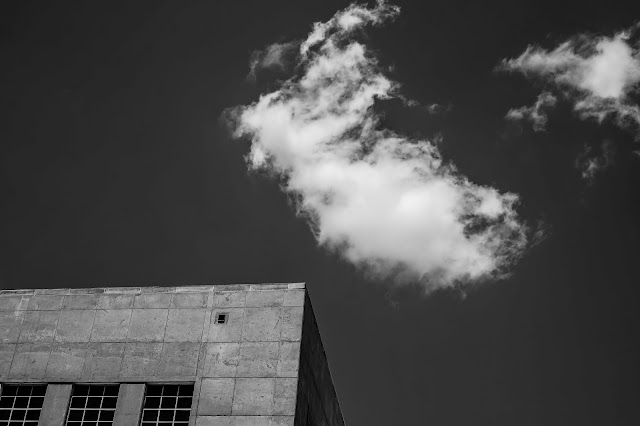 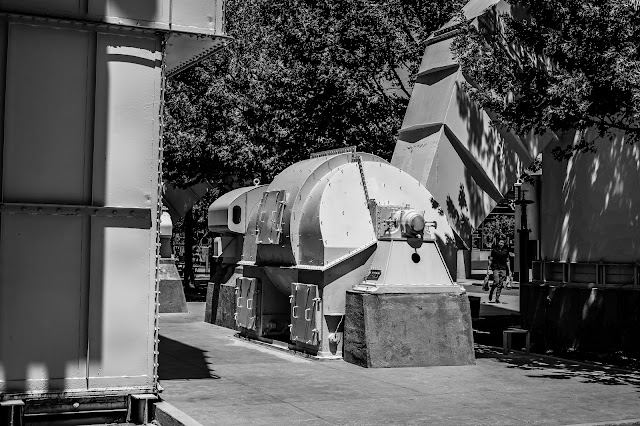 It's safe to presume that what were considered failings of earlier lenses used on earlier digital cameras has been largely remedied by toning down the AA filters on newer, higher res digital cameras and also making the filter stacks thinner so light rays didn't get clipped as they moved toward the corners and edges of sensors. Better sensor technology lifts all lenses. Even these older, "made-for-film" lenses we've held onto.

Got any old Canon lenses sitting around? Ready to get rid of that 100mm f2.0 or f2.8? No use for that 50mm f1.4 that's just sitting on the edge of your desk in your Summer house? No space in your Leica drawer for "lesser" glass? We can help.

Oppressively hot here but I'm staying indoors and acting as the boy's butler this week. I'm hoping for a generous tip but you know the reputation these millennials have.....

Posted by Kirk, Photographer/Writer at 18:12 13 comments: 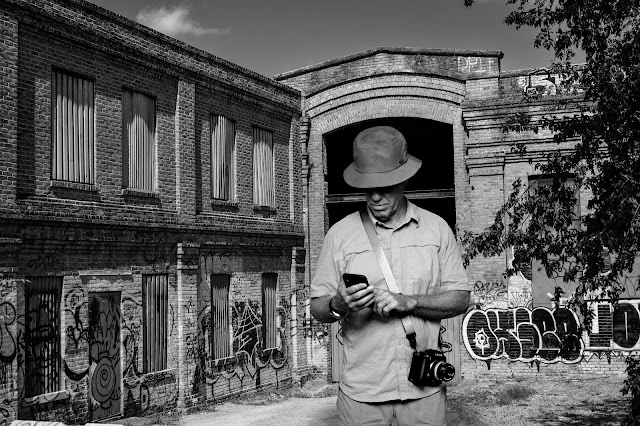 I have composited myself into this background. I shot the "Kirk" shot in
the studio against a gray background. Beats using a tripod and a self timer out in the sun.
I have a new strap attaching method for conventional, "old school" camera straps. It's a little complicated but it's so secure. The other day I had to unstrap one of my Leica SLs to put a Buff gaiter on the strap. The Buff gaiter is a tubular cloth construction meant to worn by humans as a protective scarf keeping your neck safe from UV. I figured if it's good enough for a photographer it just might be good enough for my camera. By running the strap through the gaiter tube I can...... oh wait.... I wrote a whole blog post about this in 2014. On the 28th of July. Right around this part of the year. To learn more, read here:

Anyway, I spent a hot afternoon using the new, white and gray Buff device (as described in the link just above...) and then I disassembled the strap and fully intended to re-strap the camera the next morning. But the boy's accident superseded the strapping agenda and time became unfixed. So when I reached for my favorite SL (and yes, they each have a personality...) it was strap-naked. Not wanting to spend time on my more rigorous strapping modality I instead pulled the much maligned Peak Designs strap out of the "reject" drawer and attached it. The work of seconds instead of minutes. And then I headed out the door.

It's really the first time I've seriously tried the cross chest carry of a camera since, well... never.

I always carry a camera over my left should in a traditional strap that has some built in stickiness that helps prevent shoulder slide. On the Peak Straps that stickiness is on the wrong side of the strap so I decided to go with the flow and at least attempt the cross body carry. I adjusted the strap length for comfort and headed out for a long morning walk. Hoping to get in three or four miles before the humidity returns and the afternoon heat becomes oppressive and dangerous.

Everything worked out okay. I got used to pulling the camera up from the side to shoot and letting the slippery strap slide around. It was fine. I guess I could get used to it if I really needed to. The quick attaching and detaching is the primary selling point for me. Maybe Peak Designs could do a thinner strap with the sticky friction stuff on the correct side and the same round quick release parts included. That might actually be a good strap.

From an aesthetic point of view I felt as thought I'd fashioned a camera strap out of a 1975 Chevrolet Nova seat belt. Same basic material and same color schemes. Hopelessly tacky.

But, usable and not at all uncomfortable. See? I can change my mind. Under temporal distress.

As a partial and lukewarm apology I've decide to put up a link to their site. I am not affiliated and no one. Literally, no one, is paying me.

Posted by Kirk, Photographer/Writer at 16:24 16 comments: