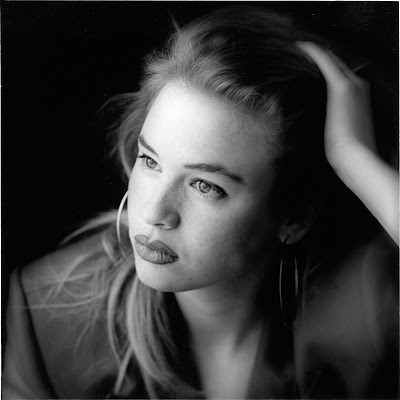 So.  I've written about my proclivity for shooting with medium format film and I've made a case (I think) for using the tools that inspire you most, but there's an image up next to my desk that kicks me in the shins every time I get the gear lust and start to covet yet another camera that's destined to make me the "hot" photographer of 200x.  It's the one on the right.  The image is of Rene Zellweger, circa 1992 and it's a constant reminder to me just how secondary all the equipment really is. I was trying to replicate a shot I'd done of my wife Belinda, years earlier. That shot was done on an old Canon TX film camera.  A real beater of an SLR, with shutter that capped out at 1/500th of a second and a little "stick and lollypop" metering system.  I was living in an old house at the time and I'd set up a quickie studio in the living room with a rickety old tripod and a 500 watt photoflood in a utility reflector.  The light was aimed into a 40 inch white umbrella in the "shoot thru" position and placed fairly close to Belinda.  It had to be pretty close because for some silly reason I was using ISO 50 Ilford Pan F black and white film.  The lens was wide open.  The result was wonderful.
Flash forward ten years and I'm in the studio with (at the time) unknown future movie star, Rene Zellweger, and we're trying to get that same look.  I'm using the same old Canon TX and I was using the Canon 135mm Soft Focus lens.  Same old, tattered umbrella and some variant of a 500 watt continuous flood light.  It's one of my favorite photographs.  Partly because it reminds me of the silly projects that Rene and I did together (like an art video entitled, "Coffee. Is it a gift from God or a tool or Satan....."  lots of long shots and coffee cups, and girls with leopard print scarves and little black dresses......) but mostly I like the image because it reminds me that all the gear is so secondary to the power of my intention.  If I intend to do an image I generally carry through and do what's needed to realize my ideas.  The momentum of my intention is what makes a project successful or just another piece of crap.  The equipment is so much less important.
A second, and most important point.
After my last blog post I got a wonderful personal e-mail from a photographer in Alabama who basically said,  "The lights don't matter.  The camera doesn't matter.  The lens doesn't matter. The only thing that matters (to a portrait photographer) is, how do you get that look in their eyes?  That rapport?"  She went on to say that she'd searched the web for a while and felt that some of the images I shot had the emotional quality that she was interested in.  She wanted to know how to get to that.
I've thought about it all week and I have an answer that will, no doubt, infuriate people who love to be surrounded by an entourage.  The answer is:  you must make a portrait sitting a very intimate relationship.  You must eliminate any distraction for you or the sitter.  No people in the room.  No tight ended schedule.  No fluttering make up artist.  No eager and relentless assistant.  If you want to truly connect with a sitter you must throw out all the crew and friends and the people who get you coffee and look at crap on the monitor.  It is like making love and very few people are comfortable doing that with a crowd looking on.
People will open up in front of the camera if they trust you and they don't have to entertain or make allowances for other people.  This whole mania of carting around assistants for every project, no matter how small, is one of the things that's killing good portrait work.  Send them outside to clean your car or to paint the fence.  A good portrait is a one on one sharing.  A collaboration and very little else matters.  Shooting a portrait, whether for fashion or your own art, with other people in the room means that you've abdicated your intention to do an intimate portrait and you are tacitly content just to do self serving theater about photography. At that point you've become a hack.  A workshopper.  The kind of photographer who cares more about how he looks on the video his assistants are shooting of him than how the image in his camera looks.  At this point one has abandoned the true practice of portraiture and become a hollow caricature of a photographer.
One sitter.  One shooter.  An empty silence filled with potential.
Posted by Kirk Tuck, Photographer/Writer at 17:23

I think that just about says it. Great post.

After all the insipid videos by the "hot" photographers of the day, all shown surrounded by hordes of assistants and model wannabe's and all that it's nice to hear that art isn't about massive numbers or shared group experiences. Screw all that feel good stuff. Give me more tough love like this. This is the real meat!

Kirk, because of posts like this, your blog is quickly becoming my favorite.

Great response to your reader's question. Very inspirational to me.

What a great story! I would love to be a fly on the wall at a cocktail party with Kirk. I bet he's got a zillion great stories from his photo shoots. Ever thought about writing fiction?

Great insight...food for thought. Your words are encouraging; I'm staying tuned for the next installment; esp. if it's anything like this one and the last one!

Kirk, is it ok to make a request? I'd like to read your musings on large format cameras, 4"x5" and such. Please enlighten us!