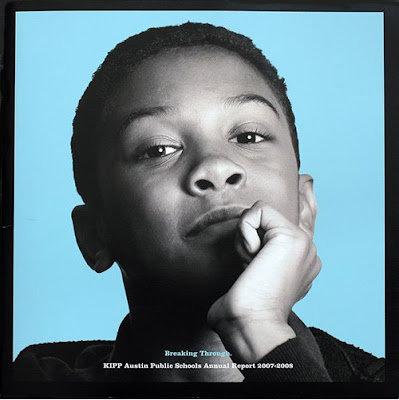 It's that time of the year again. The Austin director of the Kipp Schools would like me to donate time and energy to help them with their annual report. Their AR is one of their principal fund raising tools. We've done the last four, won some Addy Awards and some local awards and generally helped move their game forward. The Kipp schools are non-profit charter schools that serve an incredibly important function. They provide a top quality, college prep education for children with brains and talent who are underserved in public schools. According to a huge article in the New York Times the people who do the Kipp schools have achieved amazing results. Given the opportunity the kids excel. They match the test scores of kids from affluent neighborhoods. Amazing stuff.
The job will take a couple of days of shooting on location. A couple days of post processing and a few meetings. They would like me to donate my services and I will. I'll do it because it's an educational cause I believe in, the economy has provided me ample free time, and it's a nice showcase for my work. Does this mean that I believe in doing free work as a means of promotion? No.
I've been following a thread on the web wherein the original poster complained about Google asking professional (meaning established, working designers) to submit spec designs for material that would be used on various websites. If accepted there is no other payment than the implication that one's work would be seen by millions of viewers.
This follows on the heels of various posts on the web that contend the only way to break into New York's closed circle of fashion magazines is to offer to work for free. Many people rushed to protest this point of view. And there is a an obvious disconnection.
Supporters of the "work for free" theory suggest that it will bring in massive amounts of commissioned work at highly profitable rates. They further suggest that this the paradigm of the future for artists so we should stop whining and get with the program. They point to photographic luminaries such as Joe McNally and David Hobby as examples of people who are giving away their photo knowledge and prospering. And here's the disconnect: David and Joe have products to sell that are different than photo commissions. They are selling books, DVDs and workshops. Their rationed release of information, and Joe's scintillating stories from the field have as their goal to sell product. Their blogs are not aimed at clients, in fact, if we are to be honest our advertising clients have little interest or time to cruise photographer's blogs. So while David and Joe are prospering by offering free samples they are prospering by selling intellectual property through these vehicles and not art.
For large companies to leverage their reach and their resources to exploit and extract time, intellectual property and art from single person businesses by making vague insinuations about the value of exposure is unethical and immoral. Helping out your family or your favorite cause is part of our common pact with each other and with civilization. Helping a major corporation become wealthier by becoming a "scab", and a free one at that creates inertia that pushes artists further and further away from being able to survive financially in this world.
There are those who argue that they have no obligation to support artists. I agree. The market will decide which artist succeed financially and which will fail. But I would argue that a person supported by his or her profession who muddies the waters of the creative markets by placing the aggrandizement of their ego over the welfare of society in general and, by extension, the fate of the arts, is making choices that will make our culture coarser and less compassionate. I think that's sad. If you are good enough to do the work you should be paid for it in real currency.
Here are my ground rules for donating my services as a photographer: The cause must be good. The entity must be a non-profit. The use of my art must conform to best industry practices. The final piece should have a clear goal and a clear set of metrics with which to measure success.
If you are a full time doctor, lawyer, IT guy, etc. and you are giving work to corporations for free that they would otherwise pay for you are disrupting a system that supports imaginative thinking and creativity. That's all.
Posted by Kirk Tuck, Photographer/Writer at 19:18

It doesn't change your conclusions, but I think DH's business model is a little different than you described since he also sells advertising. I haven't been to a workshop, so I don't know if the true secrets are given there.

McNally's a funny case. He does the location stories on his site but also did first drafts of many of the chapters of his book (you read HSD, right, for market research?) Follow his blog, watch a few of his videos, and you've got the book.

Kipp Schools looks like a good cause. Here's wishing that it all goes well.

I agree, DH and JM are selling to photographers, sure they are giving away free info but I think it's called a loss leader in commercial terms. I don't mean that they are leeches, far from it.

I have read DH from the moment it started and I thank DH wholeheartedly for his willingness to give more that would be necessary to sell his product.

I haven't bought anything off DH but I do have two books from JM. Did his website sell them to me, sure, he's a good photographer and I thought I could learn something.

I have worked for free but only for non-profits where no one is getting paid. I would not work for 'exposure' if someone is getting paid, it's my personal ethos and not for everyone. I know a couple of photographers who work for free or peanuts here, they seem to have a strained, hopeful expression on their faces every time I meet them and, as you do, I ask how they are doing, "Great" they reply, "I've just worked for so and so and they said they'll let so and so know about me". Insinuating that their big break is just around the corner, while their wives and husbands are working all hours just to support their habit.

It's the wives and husbands I feel sorry for.

Again, I believe Kirk has hit the nail on the head. Blanket statements about marketing and free-ness are stupid and short sighted. Working for free is psychological slavery. Mentally ungreen.