How would I design a perfect camera for me? 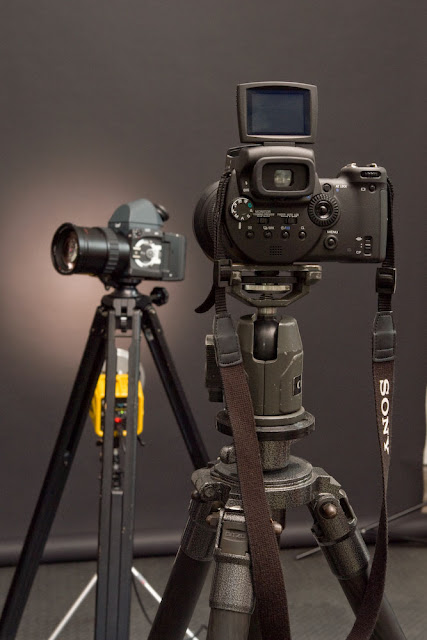 When I was a kid fast cars were king in the U.S. and we spent a lot of time with notebook paper and Bic pens drawing fantasy cars.  What would our ultimate car be like?  Of course there would be hood scoops and spoilers but also big fat tires and engines that virtually bulged thru the hoods like steroidial biceps.

Then we got all grown up and discovered "trade offs".  We'd trade acceleration for fuel efficiency.  We'd trade hauling capacity for aerodynamics. And we'd trade cool for value or reliability.  Now we drive Hondas and Toyotas and the errant Ford or BMW.  No Super Hemi Charger SS stud cars.

In early days of digital we dreamed about our ultimate cameras. They would have "at least" 6 megapixels!!!!  Would shoot at least 2 frames per second!!!!  They would have very clean files right up to ISO 400!!!!!  And they would write at least 8 big raw files to the memory card before you "hit" the buffer and hit the wall of waiting.

I was putting together my current stuff for an event shoot this weekend and I started thinking about what I want out of a camera today.  Here's the basics:  I want 12 megapixels and I want them at 5 shots per second in raw.  We've already got that.  I'm set there.  I want more that 18 raw files in a row without a slow down or hiccup.  We've already got that.  If you need more you're shooting something so frenetic and weird that the rest of us don't even know about it.  I want a great finder and a great rear LCD that I can swivel around and look at from many angles.  Okay.  My Olympus e3 and e30 both do pretty much all of this without breaking a sweat.  For nearly all of my work I need a good, solid ISO 200-800 and I've got that from just about any DSLR I pick up.

So what do I want that isn't out there?  This will sound strange but I'm ready for electronic viewfinders.  I was an early adopter with the Sony R1 but the performance was nowhere near convincing.  It was the Olympus EP2 that changed my mind.  The overwhelming feature?  Being able to set a specific aspect ratio and see exactly that ratio in the finder, edged by black.  I'm partial to the square but occasionally I'll set a 16:9 ratio for images destined for hi-def monitors.  Wonderful. And it's also wonderful that the finder matches the output to such an exacting degree.  It's also great to see a histogram or a quick, hi-mag view live on the screen.  I'll go out on a limb and say that this is the future.  In five years all camera manufacturers will have abandoned prism finders and implemented very good EVF's.  It will go hand in hand with the inexorable drop in DSLR prices.  And we'll love em.

I want a bigger EVF in a body like the current Olympus e3.  Maybe we could make that body a little smaller and lighter as well.

If we take out the pentaprism couldn't we also do away with the moving mirror?  That would reduce the number of moving parts in a DSLR by a huge amount.  All that would be left is the aperture stop down mechanism and the shutter.  So cameras would be lighter and more reliable.  Not bad.  And not having to charge a mirror would also save on battery power to offset the increased use by the EVF.

The next step (and it already exists) is purely electronic shutters.  No moving curtains.  The advantages are twofold:  Fewer moving parts and faster flash syncs.  At this point the only moving part of the camera body would be the in body image stabilization.  Just about nothing to go wrong mechanically.

So now the cameras would be smaller, lighter, less expensive and more reliable.  Not bad.  Not macho but not bad.

Starting to sound like a tool that's becoming transparent.  Almost invisible.
At that point we can turn the prowess of engineering to creating lenses that are smaller and lighter but have as good or better performance.  Really,  if you could have all the performance of a Nikon D3 in body that weighed three quarters less but had all the peformance parameters you needed and was 20% of the price wouldn't that be good.  Let's face it, the barriers are gone anyway.  Why continue to carry around the heavy and bulky legacy of the mustache wax days?

On another note:  I think I figured out how the medium format camera manufacturers screwed up.  We saw these cameras as a replacement for our studio (read:  moveable standard 4x5 and 8x10 cameras) but we only looked at the resolution.  In the ten years before MF digital came into existence we were well past the need to use big cameras just for resolution.  The real advantage of the view cameras that the MF's replaced (and which is rarely duplicated) is the ability to use movements.  To shift, tilt, raise and lower, and swing each standard, independently.  By doing so we had total control over product/subject geometry and also distribution of focus.  Everything else about large format film cameras was a red herring.

While Nikon and Canon are on the right track with their tilt and shift lens I'm hoping that someone comes out with a modular camera which is small and affordable (anything over 8 megs.....) and can do actual tilts and swings and shifts.  The size of the sensor is immaterial.  In fact it should be easier to make longer TS lenses for smaller formats.  Once they have that licked they can start working on tilting and shifting zoom lenses.  With 12 to 20 megs and full movements we will have achieved what we already had twenty years ago.  It's all about control.
Posted by Kirk Tuck, Photographer/Writer at 23:04 16 comments: 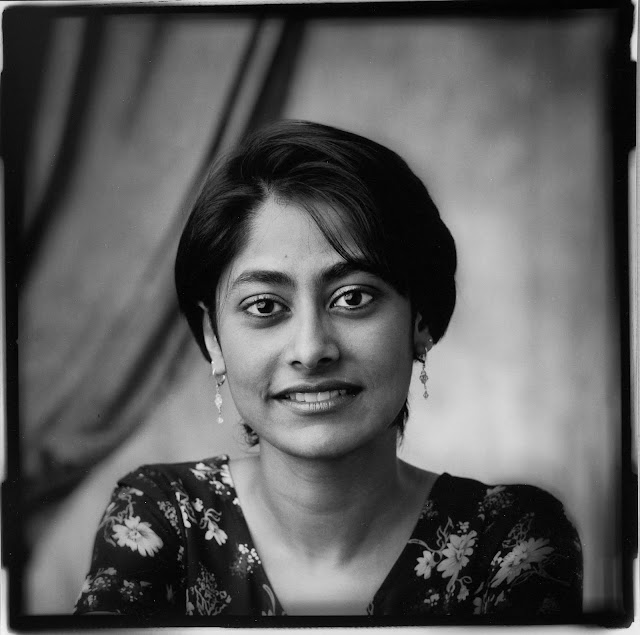 You know how it is when you check into your hotel room and start flicking thru the channels on the TV?  There's usually about 120 options, not counting the in room pornography channels and the movies that cost money.  The ones that you can't really expense.  And in the end you end up turning off the television and trying to find something to read in the gift shop because no matter what you choose on TV you'll regret the time you wasted and you'll be certain that, while you were watching a Seinfeld re-run or a Steven Segal movie for the 5th time, you will have missed something even better on another channel.
There have been a few good books written in the last few years about the "tyranny of choice".  Seems the more choices people have the less happy they are in life.  If you get to a shelf with sixty different kinds of peanut butter the need to choose wisely becomes overwhelming.  And no matter which jar of organic extra crunchy you pick you end up with the queasy feeling that you've overlooked something that might be a better value or even a better product.  In the end shopping becomes a form of torture.
And that's just for those of us who are usually decisive and have a good, built-in "decision tree" mechanism.  Pity those who are already wishy-washy.
Okay, Tuck.  What the hell does this have to do with photography?  Well, everything.  As photographers I think there's a tremendous force of market that makes us feel as though we should have a style.  Any style----as long as we have a style.  But it takes years of shooting and shooting to develop one on your own so the conventional wisdom is to "adopt" a style by emulating someone else's style that catches your eye.  And in the course of "appropriating" the style there is almost assuredly the wish or hope that whatever deficiencies are perceivable in your rendition will be chalked up to your "unique" interpretation of your "appropriated" "homage" to this "adopted" "emulation".
But you know the whole idea of copying a style to learn is absolute bullshit and only serves to prolong your omnidirectional apprenticeship.  It's like trying to learn how to swim with a giant intertube around your waste.  So why do we copy other people's styles in a vain attempt to create our own?
I think it's because there is the perception that there are too many styles to choose from and the tyranny of choice is paralyzing.  In ancient history photographers were inspired (could copy from) only the styles they saw in magazines, books and newspapers.  The craftier ones (better schools?) could also draft behind pieces of fine art....paintings, sculpture and the like.  But the range was finite and soon exhausted.  At that point an artist had to make some declarations and plant his flag in the creative firmament.  You could only copy Henri Cartier Bresson for so long before the rubes got wise to your plagiarism.
Now you could go your whole life just aping stuff you see on Flickr, and the other share sites.  But what does that buy you?  Perhaps it's better to labor in ignorance, unsullied by anyone else's influence.  But that may be impossible in our highly visual culture.
Why am I thinking about all this?  There is a personal angle.  And that's my realization that choices can negatively impact your own art.  Here's my brief story:  I love shooting portraits.  I love shooting stuff like the image above and I should have spent the last few years diligently doing this work.  But I started writing stuff.  And it was fun.  And the more I did it the easier it became.  Then I was approached by a publisher and have since done four books on photography.  Each book consists of between 50,000 and 60,000 words.  Each book consisting of between 75 to 100 images.  And writing and producing all the images was only part of the deal.  You soon discover, no matter how good your publisher is, that you will best be able to do the social marketing and personal marketing required to drive significant sales.
When the bottom dropped out of the commercial photographic market I also started doing various workshops to supplement my income.  These are a real blast.  Add to that some speech writing for a big client, some advertising writing for another and a few video projects and you've got a formula for disaster. Write a book?  Take a picture?  Help with someone else's speech or book?  Take a picture?  Make a video?  Take a picture?  Teach a workshop? Take a picture?  You get the point.  Death by a thousand dilutions.  How thinly can you spread your energy and attention?
Having multiple skills is a blessing and a curse.  Do you focus like a laser on the one thing that brought you into the fold in the first place or does short term expediency drive you to accept diverse kinds of work that prevent you from concentrating on what you love best?  2009 is over.  The relentless economic panic is diminishing.  Decisions have to be made.  Everything or one thing.  Mastery or coverage.  The tyranny of choice hovers over me like a buzzard.  But once Pandora's box was opened......to be continued.
Posted by Kirk Tuck, Photographer/Writer at 22:21 5 comments: