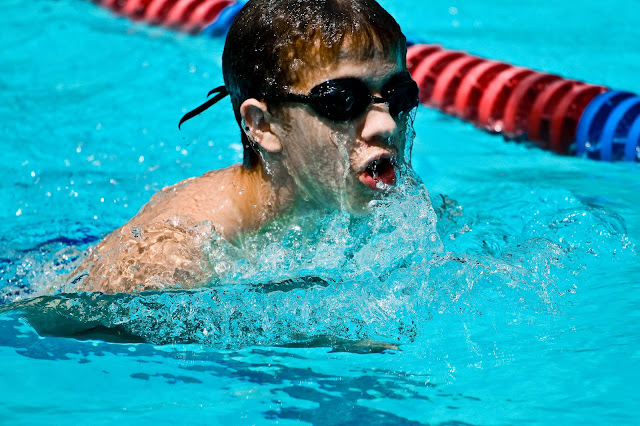 Ben's been on the Rollingwood Waves swim team since he was five.  Now he's fourteen.
In a week the Summer league swimming will be over.  We'll have an awards picnic at the pool.  We'll have a show of images using an LCD projector and some white seamless paper tacked to the side of a wall.  Kids will laugh at photos of each other.  Parent's will say, "Awwwwww.  That's so sweet."  when they see  random photos of their kids.  And things will calm down.    Then Summer will be over and Ben will be in high school and it'll be back to the endless studying and relentless projects.  He's taking a film class (movies) this year.  It emphasizes screenwriting.  But they also shoot a project.  And then Summer will be over and only the master's swimmers will come to the pool with any sort of regularity.  I'll miss it.  So I'm shooting a thousand images a week.  Trying to lock in visually what I feel emotionally when I'm at the pool.  It's so much more than swimming.  It's about growing up.  The tidal flow of life.
Don't remember the camera or the lenses.  Just the race.  And later, when I get in to swim, I imagine the same cool water across my face.  Maybe the only magic in photography is the power to condense so much into memory.
Posted by Kirk, Photographer/Writer at 15:39 No comments:

Wonking out with a blingy new lens. 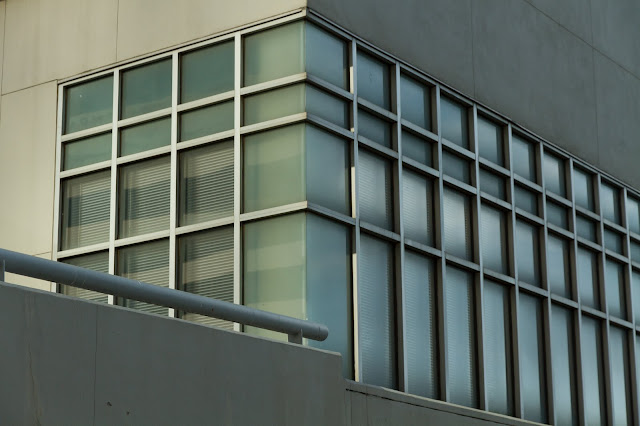 
So I convinced myself that I needed a lens that would cover a lot of focal lengths.  You know, a "walking around" lens.  And I convinced myself that, since the Canon 24-105mm lens was really computed and designed for full frame cameras that perhaps it wasn't really optimized to give me the very high resolution performance that an EFS (lens for Canon cropped sensor) lens might give me.  I pored through the test reports and then capriciously bought an EFS 15-85mm 3.5 to 5.6.  I would never have done it but the single best zoom lens I ever shot with on an APS sensor Nikon was the 16-85mm and I was hoping that this lens would be Canon's answer.  Big deal.  Almost all of my favorite shots are taken around 50mm.  Like the one above.

But I did shoot at both ends just to see what it would do.  Straight out of the camera there's distortion galore.  And vignetting to beat the band.  Not use to seeing that after using Olympus's better lenses for the last year... But, after I pushed the right buttons in LR 3 the lines straightened up, the corners got brighter (but not too bright) and everything settled down.

I'm not saying this lens is good or bad.  I kinda like it but that's more because I like the way it feels and looks.  When I shoot for pay I go with known good performing lenses.  But I'll keep pounding away with this one till I like it or sell it.  One thing though,  it's a great set of focal lengths.  About 22mm to about 130mm in one tube.  Groovy.

Here's what it looks like wide with some wild polarizing thrown in just to make it fun: 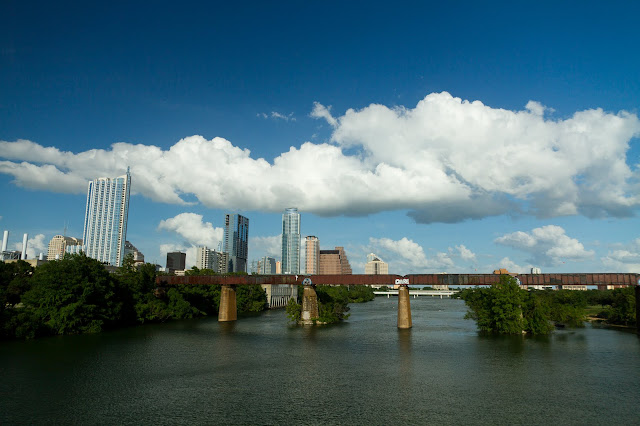 I love Texas skies when they're crystal clear and laden with big, puffy clouds.  And I always love walking around the downtown lake.

Here's from about the same vantage point using the other extreme of the lens: 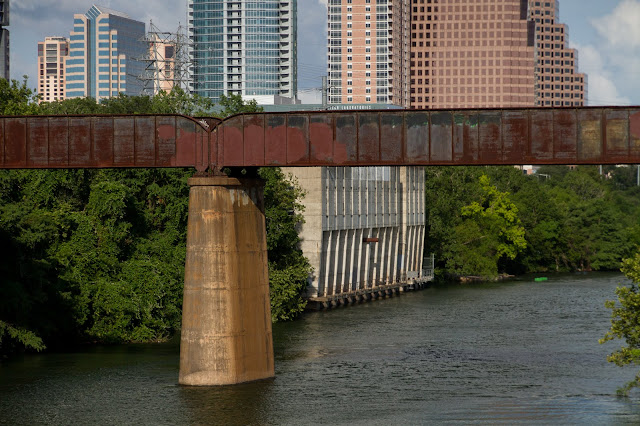 You can see the above power plant in the wide photo, near the middle....

And, of course a tromp through Austin's downtown always leads me to the Frost Tower so I tried the long end on that as well: 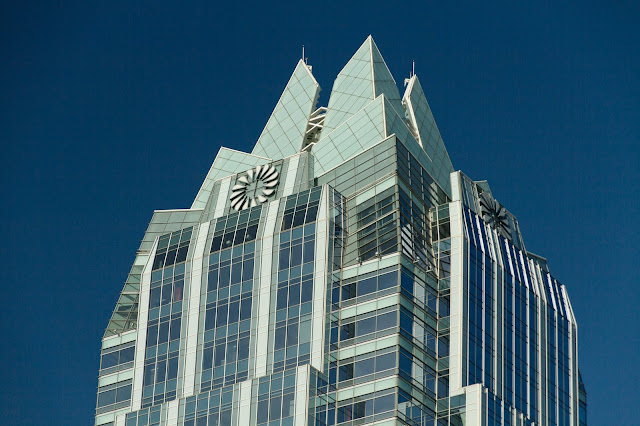 Finally,  another 15mm frame of the hike and bike trail bridge and I was done with this most schizophrenic of all optics..... 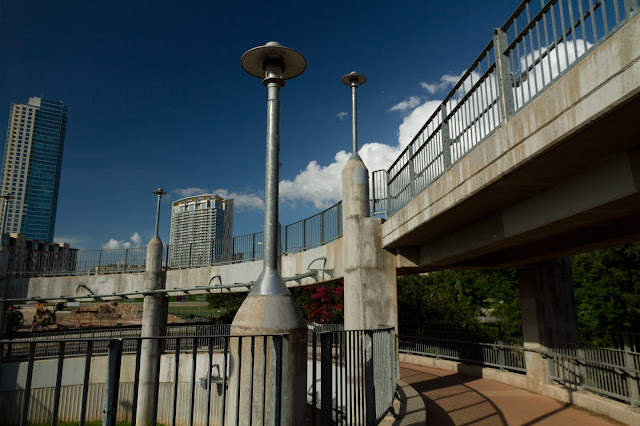 No big assertions no big review.  I like all the focal lengths.  I don't usually shoot wide but sometimes it's fun to try it out.  I don't like the slow apertures at the long end but what are you going to do with a 5+X zoom?  I will say that the IS/VR operates as advertising.  Even with five espressos (an exaggeration meant to be funny and not serious) I could still hold most stuff still at 1/15th of a second.  In the heat.  Dehydrated.  During and earth tremor.  While standing on one foot. 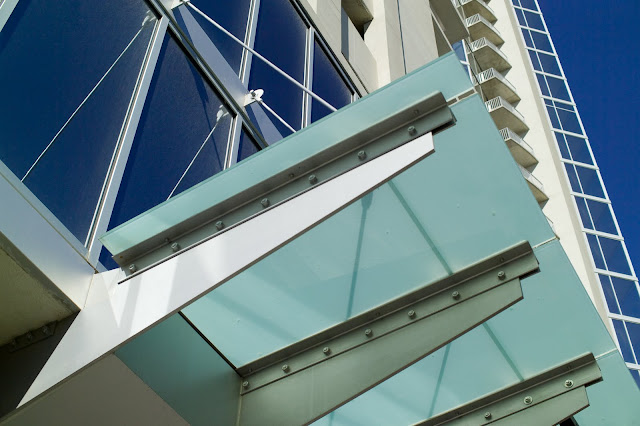 I don't sleep much.  I like to stay up till one or two in the morning working on stuff.  Mostly post processing assignments and doing pre-production when things are quiet.  The dog usually comes out to the studio with me and sleeps on a purple carpet right next to the desk.  I like to get up in the morning in time for the early masters swim workout at 7am.  Sometimes I wake up late and go to the 8am workout instead.  But I guess the point is that I have time to think about stuff.  Maybe too much.  When everyone else in the house is asleep my brain likes to see what's new in the world of cameras......

I'm always interested in what's next but maybe to the detriment of "what's now".  Cameras are a good case in point.  I love the new stuff.  And there's a thousand ways to rationalize it.  Most rationalizations have to do with how much easier it will make my job or how much more accurate the screens on the backs are.  But sometimes I veer over the line and start pontificating about how much better the files are.  And it's true.  Camera files have increased in detail and resolution, and much of the noise and banding that plagued earlier digital cameras has been dealt with.

I've been shooting with a Canon 5dmk2 for the past few weeks and the files are, indeed, pretty spectacular. (not out to start a camera war so I'll pre-emptively say that the Nikon D3x files are probably even better!)  So, just when I'm thinking everything makes sense and I've got it all figured out I do something silly like rearrange my equipment cabinets and stumble across some old tech.

I pull it out, charge up some batteries (yes, in days of old a walk in downtown was usually a 3 battery adventure with many cameras and not just a 20% on one charge kind of thing) slap on an old favorite lens and head out for some shooting.  In this case the camera I stumbled across was the first really reliable, affordable (by some standards) full frame DSLR, the Kodak SLR/n.  Nice specs.  14 megapixels.  Lotta bit depth.  Good raw files.

Lots of downside too.  Horrible, horrible LCD screen.  Bad hump below the eyepiece made for an ergonomic nightmare.  The electronics sucked down battery charge like you wouldn't believe, even when the camera was turned off.  The ISO's above 200 were plenty noisy.  Over 400 they were  unusable.  There was sometimes moire.  And color shifts across the frame.

But.....it was a great camera.  Not to many menu choices.  And in its narrow window the colors and sharpness were superb.  I shot with it a couple weeks ago.  A bit downtown and a few portraits.  Toe to toe with the 5dMk2 for flesh tones and color.  The Kodak actually had deeper and richer color but I guess I could match the Canon to the Kodak with enough saturation, hue adjustment and steeper contrast curve.  But,  the fun thing is that it really is toe to toe in its narrow band of capability.  And this is a six year old camera in a field that changes every six months.

Not saying I'm going to head backwards to 2004 or that you should abandon your D3's or A900's.  Just a nod to some engineering that did a good job putting food on the table and making big, brilliant photographs for a couple of years.  I've sold a lot of cameras as the digital bus has lurched forward from pothole to pothole but for some combination of nostalgia and historical appreciation I've never been able to sell my two favorite Kodak cameras:  The DCS 760 and the SLR/n.  In a sense, the DCS 760 and it's ancestors going back in the fog of time, invented and codified our idea of professional DSLR's.

Sometimes it's fun to see how far we've come.  And all the ways in which we really haven't.