A reprise from early 2009. Just because I'm in the mood for Lisbon. 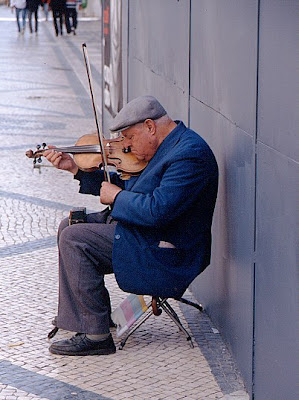 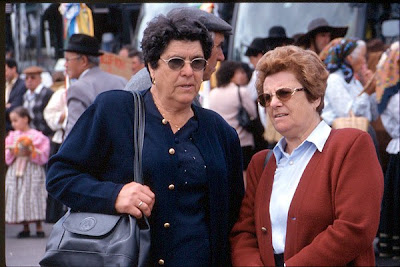 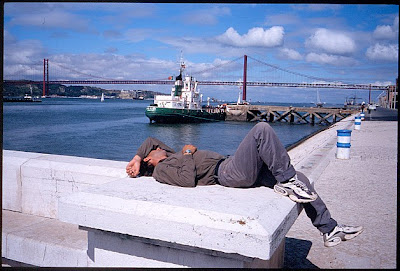 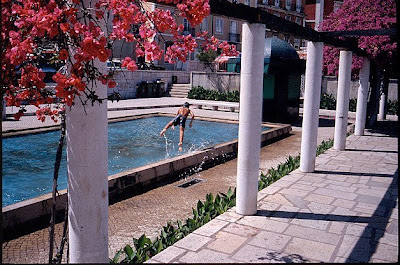 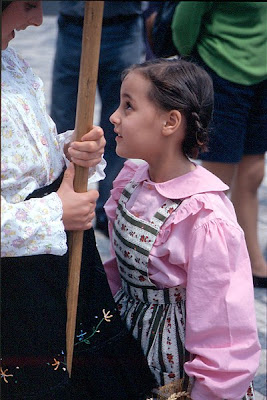 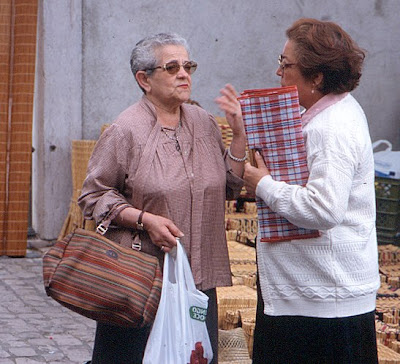 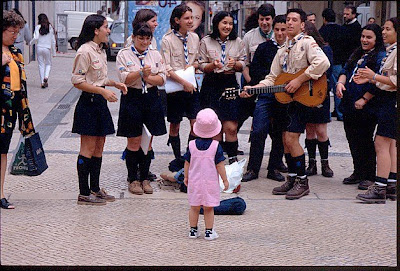 Do you shoot out in the streets? It's hard if you live in one of most American cities, for a number of reasons. There are really very few places to shoot. People live in their cars and at the malls. And people in American tend to dress down. Cargo shorts and white t-shirts with logos on them. Comfortable and tacky. And we do tend to be the one of the fattest countries around, per capita.
If you live in New York City or San Francisco, save your energy. I know your towns are walking towns with a plethora of rich visual targets, just right for fine photography. If you are large, given to wearing bright t-shirts, cargo shorts with stretchable waist bands and running shoes, please try to look out for photographers and maybe don't loiter too long in front of obviously cool landmarks or architecture.
But if you are really into shooting in the streets you'll want to find towns where people strut their stuff on foot and where the ambulatory culture keeps the people looking good. You'll want to head to a European city. Grenoble's great because a huge swath of the downtown is pedestrian only. But one of my favorites has always been Lisbon because it seems anchored to a time warp that keeps everything five years slower.
Back in 1998 I went to Lisbon to photograph a project for a subsidiary of IBM. The project went well and I engineered some down time in the the city. Two days before the event and two days after. Every morning I left my hotel with a Leica M6, a 50mm Summicron and a 75mm Summilux. I kept a pocket full of slide film, an open mind, an open agenda and a nice pair of hiking sandals and a desire to dive into the city life and come up with some fun images.
Here's the problem for me with street shooting: I get so involved/immersed in everything that I forget sometimes to take the photographs. I found a fabulous little neighborhood bakery and I was in line so quick I forgot to lurk around and try to sneak good shots. Then I was enjoying my creme filled confection and hot, earthy coffee so much I forgot to even meter.
But after a while my basic sense of discipline kicked in and I came back with hundreds and hundreds of images that I really like. The above is a smattering. A taster plate. A flight of photos. When you go out to shoot I think it's best to throw away intentions and schedules and let yourself slide into the process like a you slide slowly into a hot bath. If you go looking for the right moment you'll generally never find it.
It's some perverse law of the universe. It's in the same set of laws that mandate if you see a great scene and vow to come back the next day to capture it the scene will never present itself again. Once Belinda and I were staying in Mexico City, in the very hotel that Trotsky used to live in, oh so many years ago. We were only in Mexico City for a few days and I kept meaning to make some cool photographs of the Hotel's interior but I didn't. Something else always came up. I decided I'd get the photos next time I was there. Of course an earthquake weeks later leveled the hotel.
It's also the same perverse law of the universe that demands you do things here and now. If you delay anything it will be changed, diluted, and made more crass. Put off going to Rome and the Rome you could have experienced will no longer exist having been replaced by a different and more homogenous version.
It's the same unfortunate law of photography that says, "Print now or you'll never see this image again." We have the right intention but we need the right follow through. When an image jumps up in your face and fascinates you the time to act on it is in that moment. But most of us put the images into a folder, go out and shoot more and then put those new images into folder and so on, waiting until life slows down and we have time to luxuriate with our little treasure and to photoshop them just so and make them perfect before we sent them off to the printer. But we wake up to find the moment gone, the image left untouched. And we think they will continue to exist but a certain physical/metaphysical relationship has changed and we'll never come back to the same image in just the same way.
These images remind me that the only time is now. Carpe diem.
POSTED BY KIRK TUCK AT 10:20 PM 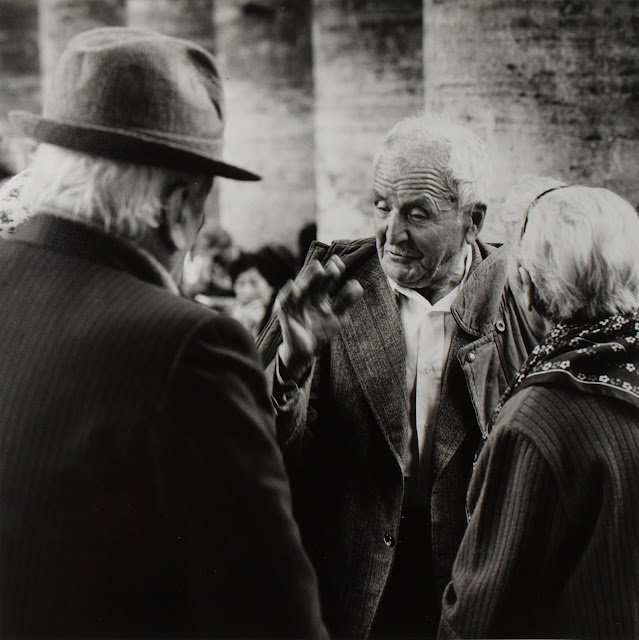 There's no substitute for going out and being in the middle of life.  It's where all the pictures happen.
Posted by Kirk, Photographer/Writer at 12:32 2 comments: 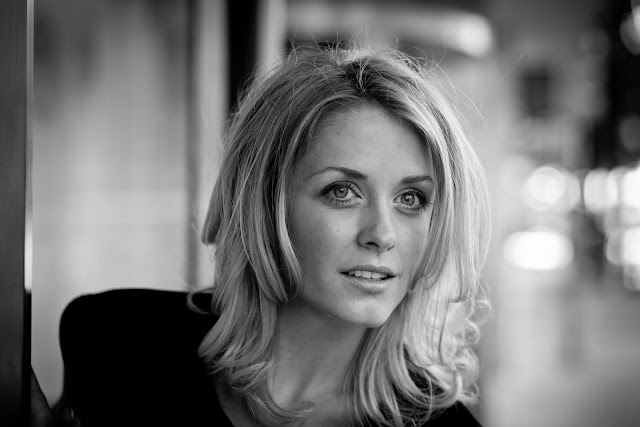 I write this blog for my pleasure and to share my limited knowledge with anyone who cares to read it.  In the back of my brain I assume that if people like what I write it might also motivate them to try one of the books I've written.  Also,  if you click on one of the Amazon links to buy something, I get a small percentage of that sale but it costs you nothing more.  Not a cent. (not too pleased that my wife recently bought the Adobe Creative Suite for her business without linking through......).  If I write a review about something I either bought it myself or I acknowledge upfront that I'm reviewing a product that is on loan from a manufacturer.  I'm squeaky clean on all this stuff.

From the outset I've made it clear that I reserve the right to a.)  Change my mind.  I may really like a product but in the following months some other company may come out with a product I like better.  Owning camera gear is not like marriage there is no promise of, "till death do we part."  And frankly, I like finding out about new gear, coming to grips with it and then moving on to the next thing.  Chances are you are the same or you wouldn't find this blog very entertaining.  b.) Go into as much depth, over time, about any subject that I want to, including Olympus cameras, 50mm lenses, the "evil" of technology (please note satiric intent, cued by use of parentheses: for the nuance impaired), the redundancy of assistants and anything else that I want to write about.  c.) Diverge from common opinion.  d.) Disagree. With anything.

I do have some credentials.  I've taught.  I'm published widely as a photographer (and as a writer).  I've actually touched and used everything I talk about.  If I write something about the photo business it's probably because the situation being discussed just came up.  Or is ongoing in my own business.  I've also worked in the ad business.

One of the things I really like about writing a blog is that I can get good feedback from smart, opinionated people.  And when it runs counter to my beliefs or ideas it makes me really sit back and think.  It challenges me to not be lazy in the thought process and to be open to other points of view.  If the comments didn't exist I probably wouldn't pursue this whole thing.

But  (and it would be nice if everyone paid attention here for my short but important rant)  if you're just an unpleasant person (edited)  and you want to call me names and infer that I'm lying or have something to hide or some hidden agenda,  if you have something nasty to say about someone I've written about or linked to,  in short, if you're just here make trouble,  I'll use my trusty moderating skills and reject your comments.  If you are not happy with that you could make it easy on both of us and just stop reading the column.  This blog doesn't exist as a vehicle for you to use to rip my day.

One or two readers (and one rude person) have commented on the fact that the images posted recently have no exif info.  Not sure why.  Must be a setting in LR3 that I've mistakenly ticked.  This has led to a conspiracy theory (on the part of one reader)  that my recent addition of Canon gear has filled me with overwhelming remorse for having once bought and happily used Olympus cameras and lenses and speaking glowingly about them.  Last I looked there are a number of Olympus bodies and lenses scattered about the studio though I will admit that I've come to like the EP, m4:3rds cameras best......  I think I make the provence of the gear most evident when it's the focus of the post.  If I'm talking about the collapse of western civilization I don't really think anyone should care about whether the display photo was taken with a 1995 vintage Mamiya 6.  ( having a hard time getting the exif info out of that camera as well.).  I'll fix the exif info if I can figure it out.  I am not a software geek and have never pretended to be one.

So to recap:  1.) Smart and polite people are always welcome to post comments and have a 99% chance of seeing them appear.   2.) Rude, vindictive people will no longer stand any chance of having their comments survive the ruthless moderator process.  3.)  I will continue to write about just what I want to write about until such a time as the subscriber base falls to near zero, the hits to the blog sag to under a thousand per day, or so, or until I get carpal tunnel syndrome.

The exif stuff will return as soon as I figure out where it went.  If you left a bitchy, anonymous post this morning, thanks for helping me get started on this housekeeping post.  You'll probably be much happier over in the forums at DPReivew.  You're welcome to stay and read and post interesting comments.

That's about it.
Posted by Kirk, Photographer/Writer at 10:38 33 comments: