I shot a baby deer today. And I didn't feel bad about it. 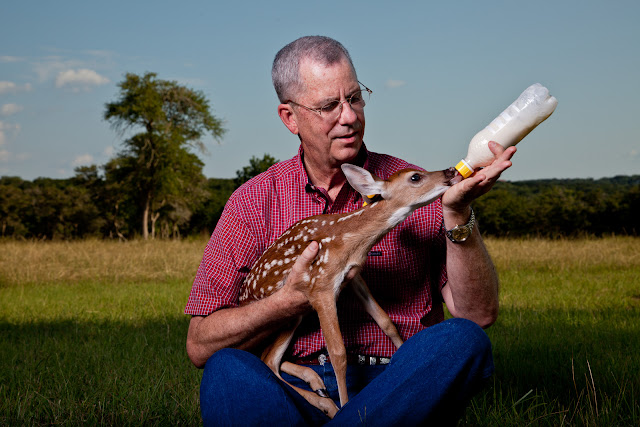 Dr. Cunningham and the baby deer. 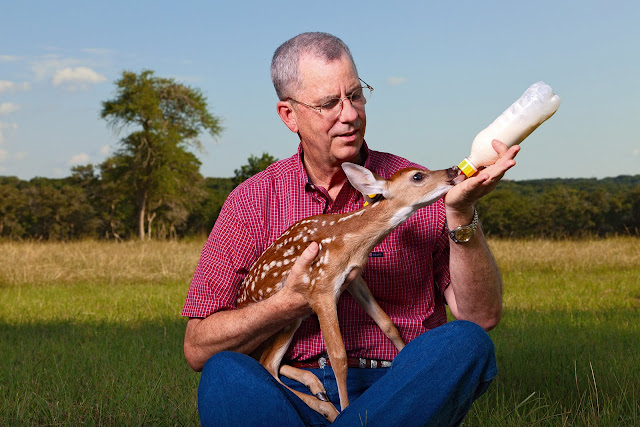 (edit: 7 july 2010:  Thought I'd step out of character and post the final edited shot right below the quick, jpeg proof shot I pulled off the raw file last night when I got home.  I've changed color balance, cleaned up the color in the sky, opened up the shadows.  Done a lens correction.  Thought you might want to see what I would probably deliver..... KRT).
I'm keeping pretty busy these days.  One of the things I'm doing is shooting photos for some medical practice advertising.  One of the marketing reps I work with is running a series of ads showcasing their physicians.  We thought it would be a good idea to ditch the white coats and the office location backgrounds and shoot these guys in their off hours.  Try to catch another side.  See what makes em tick.
When the marketing person mentioned that this doctor was raising a baby deer who's mother and twin sibling had been struck by lightning they had me at "Bambi".
We made arrangements and I loaded the car with the following:  One Profoto Acute 600b battery powered flash system,  a 20 by 30 inch softbox, a 48 inch white, pop-up diffuser, two light stands, a Canon 5d2 and a 24-105mm lens.  I took a light meter and a hoodman loupe.   And two sandbags.
The first thing I did was to sit down with the Dr. in the living room of his house and really talk to him.  Interview style.  What makes him the person he is?  What do I want to come thru in the photograph?  He's committed to giving back to patients and people who can't afford medical care.  He does missions and tons of volunteer work.  He's a man of great faith.  I wanted to show that, somehow, in the photos.
We selected a spot with some Texas landscape in the background and I got to work while he went back to  the house to get the baby deer.  The sun was coming in on the right of the frame but I blocked out the direct light on him with the reflector on a stand.  A tree also provided some shade for the general area.
I set up the light and the softbox about five feet from the subject's right (my left)  at a 45 degree angle when measured on the direct line between the camera and subject.  The bottom of the softbox is just above the doctor's chin.  I set the exposure so that the metered value for the subjects is about 1/2 brighter than the background.  We shot about 60 shots at nearly full power.
When the deer pooped on the doctor's hand and jeans I knew the shoot was wrapping up.  The deer was amazingly cute.  The doctor amazingly patient.  The shoot, amazingly calm and happy.  As I drove away I thought to myself, "This is what makes it all worthwhile.  Meeting amazing people---who do amazing things.  Not because they imagine that someone will think they are cool.  Just because it's the right thing to do".
This is right out of camera.  I haven't gotten in and pushed the pixels around yet.  When I do, this image or one of the other selects goes right into the portfolio.  It's days like this that are the reward for a life in photography.....
Posted by Kirk, Photographer/Writer at 22:15 11 comments: