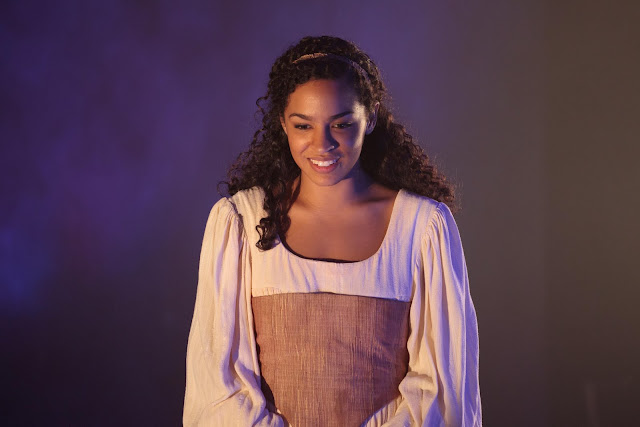 So.  Based on reviews and DXO tests and anecdotal evidence I had a reasonable expectation that the Canon5D2

would perform acceptably at 3200 ISO but you never really know until you fire up the camera and go shoot in your own style.  3200 ISO can look great if all you shoot is high key stuff with lots of sparkle and snap.  But I figure I'd put it to my typical worst case scenario and go shoot some theater with it.

I got a call from Ann over at the Austin Shakespeare Theater asking me to shoot the preview show of The Tempest.   I said, "sure" and packed a small bag.  Here's what I took:  One 5D2 body

.  I had many questions:  Would the f4 zoom be too slow?  Would I regret not getting the IS version?  Could I still manual focus the Zeiss even though I had not yet gotten the Eg-S screen? 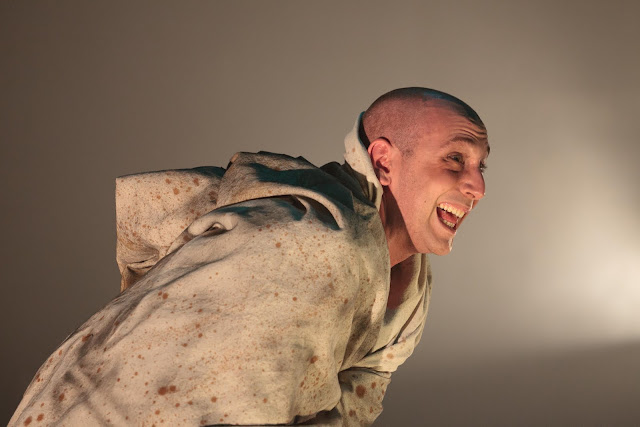 To answer each question in turn:  No,  the f4 zoom was just right.  The light levels at 3200 gave me a comfortable 1/180 or 1/250 to play with and the benefit (based on painful years of buying f2.8 versions of these lenses from Nikon, Canon, and Leica ) was that the light weight and small size was very manageable for a two hour long shoot.  That little sucker is pretty sharp right at f4 and it handles side light and flare very well.  On to question #2.  I am not the steadiest handholder the world has ever seen and I like my lenses with the IS but in this case I came equipped with surprisingly good, after market IS (image stabilization).  It was at least as good as the Canon version.  Maybe better, because it worked with every single lens in the bag!!!  It's called a monopod.  I've pooh poohed them before but I decided to grab one of the three that sit in the umbrella bucket next to the door and give it all another shot.  You know what?  They work well.  And they work best with lenses that have tripod collars......like my Canon 70-200 f4

.  I was able to shoot at least three stops slower than I could handhold.

My favorite monopod is a Leitz  Tiltall monopod that Belinda gave me as a birthday present back in 1980.  It's a very lightweight, all aluminum stick with knurled leg locks.  That makes it slower to set up and adjust but it's so minimal and black and tactical looking.  I ended up taking a Bogen/Manfrotto model

which has (unfortunately) a bright metal finish.  It uses flip locks for the leg extensions so it's quicker.  I used a quick release on the top.  It's nice enough.  It's just not as cool as the Leitz Tiltall version. 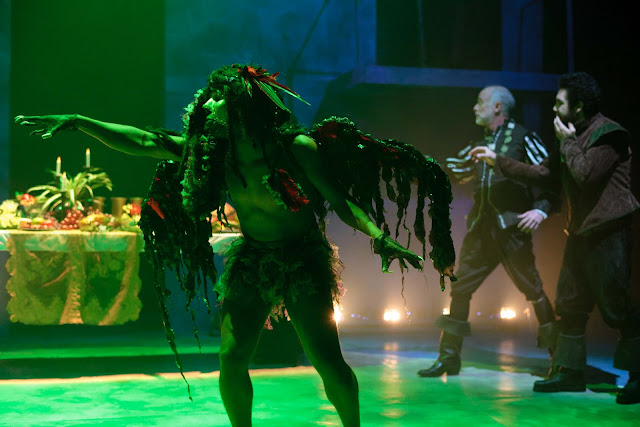 Finally, there's the question of whether or not I'd be able to focus the manual focus, Zeiss 50mm 1.4 lens on the Canon 5D2 which is not, by any stretch of the imagination, set up to make manual focusing easy. Actually, it came back to me pretty quickly.  I don't this you can spend years peering down into a  dark Hasselblad screen trying to focus a slow 50mm wide angle without retaining some chops.  Ditto with the decade or so I spent under the dark cloth of the 4x5 view camera, gazing at the Stygian screen, rendered at f16 trying to find pinpoint focus.  When you've focused in hell, focusing in the modern world doesn't seem as tough...... 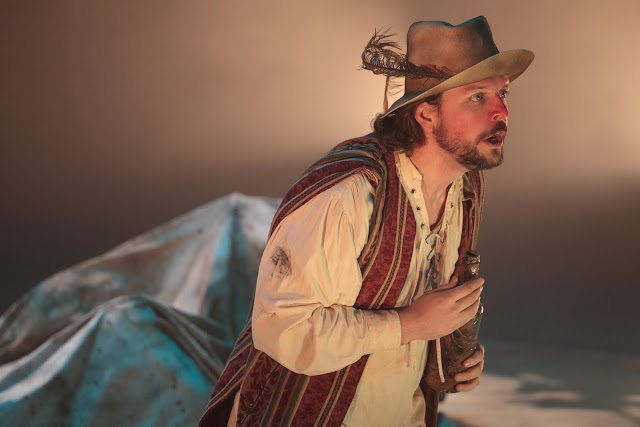 I find that truisms in photography die hard.  When most people think of taking photographs of live theater they immediately engage a part of the photographic brain, stoked by the lore from yesteryear, that they must use the fastest lenses available.  They rush to find the 85mm 1.4's and 1.2's.  The 50mm 1.2's and 1.0's and the long fast glass as well.  I was just as guilty because I always remembered the days when we shot with ISO 400 films and every photon gathered was precious.  But it's all changed.  And I'm happy.  Fast lenses aren't always good lenses.  At least, they are never as good wide open as a cheaper, smaller, lighter lens can be at f2.8, f4 or f5.6.  If you've got one of the new generation of cameras that does really decent ISO 3200 or ISO 6400 like the Canon 5 or the Nikon D3 you can rid your lore books of much old treasure.

I seem to be getting better files because the lenses can be better corrected if they aren't speed demons.  Several lens specialists, and especially Erwin Puts, haven't written volumes about how many times harder it is to design and produce faster lenses when compared to tamer designs.  The new Canon 70-200mm f2.8 zoom cracks the credit card at nearly $2500 while the older f4 version is a very affordable $650.  What do you give up?  A pound or two in weight and one stop.  Locked on a tripod and compared side by side it would be an imperceptible difference in quality between the two at every aperture.  And I'd be willing to bet that the little Canon is a bit sharper at f4 than it's new big brother is at f2.8.

The second reason for speed back in the old days was all about focusing accuracy and finder brightness. Focusing was real work and took real skill.  People practiced focusing in their downtime. Now that's so much less important because it's the rare photographer who flips the switch on the camera body or the lens barrel and goes into the manual focusing mode.

Yesterday I upgraded the Canon 5D2 screen to the Eg-S screen and there's a little bit of difference.  Mostly it's all down to practice and acclimation. 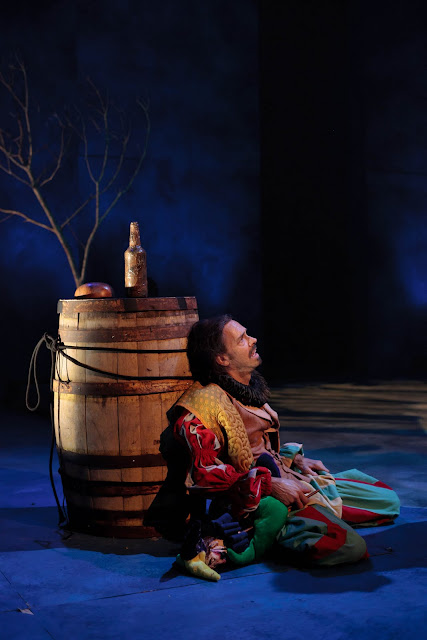 There's not a lot to say about the ISO performance of the 5d that hasn't be said elsewhere.  It's a great camera for low light shooting and I'm very pleased with the files.  The nice thing for  me is that, even with the high speed noise reduction set to standard, there is a lot of detail preserved in the files.  It really does look nice.  Next time I'll be brave and try the 6400 setting.

I didn't have time to do these files on Thurs. because we were engaged in a corporate shoot.  We shot from 8 to 11 am which is what? Three hours.  But I've been editing the 1300+ files, doing global color corrections, processing to smaller jpegs and uploading to Smugmug for most of this day.  Amazing how much back end work there is for a typical photo assignment and how little that part gets talked about.

On Sunday I start another two day project so I want to make sure I process as I go.  Nothing worse than getting behind when there's money to be made.

Two more photos and then I'm off to D.J. Stout's book signing at the Steve Clark Gallery.  Should be fun. 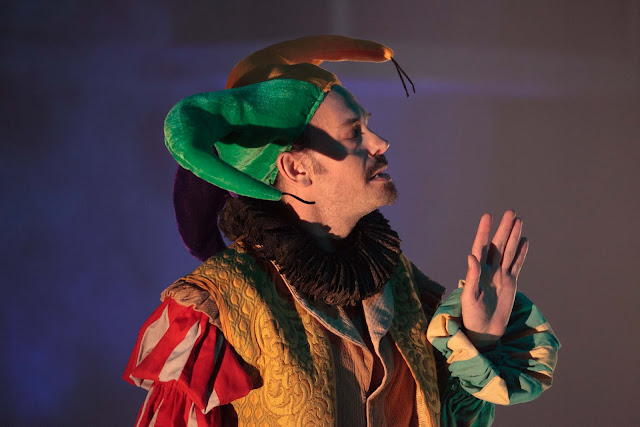 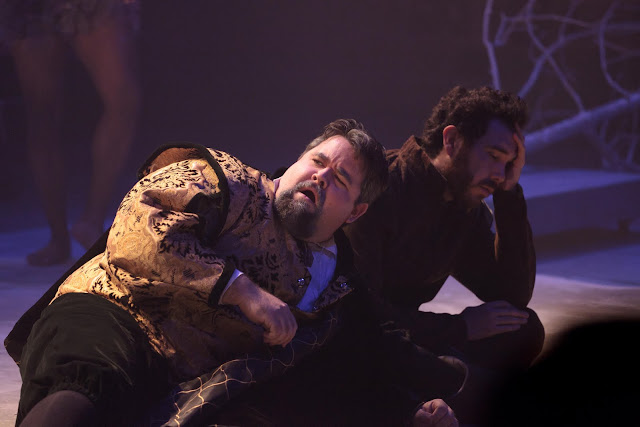 Posted by Kirk, Photographer/Writer at 18:02 9 comments: