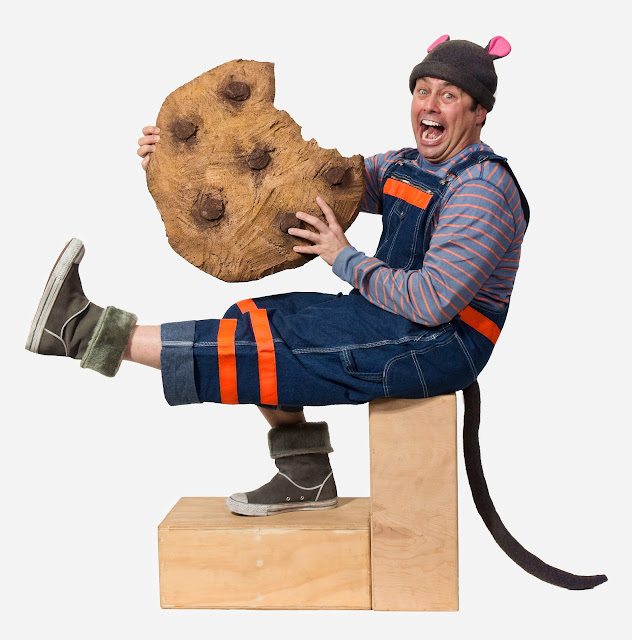 This is Martin Burke as the mouse in a new kids play,
based on the children's book, If You Give a Mouse a Cookie.
I love working with talented actors and I had a romping good time with Martin in my little studio today.  We were shooting marketing photos for post cards, posters and the endlessly starving web.  Unlike "civilian" subjects actors of Martin's caliber make a photographer's job really easy.  In the course of 30 minutes we had 225 keepers in twenty or thirty different poses.  We were shooting under the watchful eye of Zach's collateral designer, Rona.
Before they got to the studio I set up the lighting using two Elinchrom D-Lite 400 monolights.  I wanted a harder light than I usually use to sharpen up the edges of the images so I used a 28 inch, silver beauty dish, with no diffusion, for my main light source.  I filled in with a smaller, 18 inch silver beauty dish that was wearing it's white diffusion "sock."
That's all the light we needed.  I set the light levels for f5.6 at 1/60th of second, ISO 100.  Two test shots and we were ready to go.
I'd been waiting for a simple studio shot like the one above to test out the Nikon V1 combined with studio lighting.  I used the SBn5 I have on loan from Nikon to trigger the studio flashes by setting the flash in the manual control mode and dialing the power down to 1/16th.  I pointed the  on camera flash over to one side so it would have no effect on the subject illumination.  The images were all easy to work with and one click of the lens profile button in Lightroom release candidate 3.6 does nice stuff for the 10-30mm lens.  The files were shot in RAW.
Most of photographs were standing shots but we also wanted to do a few seated images so out came several of the cheapest and most useful studio accessories I have ever acquired:  The Apple Crates.  These are boxes, made of wood, that were born in the movie industry.  What you see in the image above is what is referred to as a full Apple.  They measure 20 x 12 x 8 inches and they are plenty sturdy enough for anyone to stand on.  The people who make Apple Crates also make "half apples" and " quarter apples" which are shorter in the smallest dimension.
We use them to do so many things.  I used one (inappropriately) to stand on and clamp off my white background paper this morning.  They are valuable as posing blocks and they are especially valuable for photographers who, like me, are five feet, eight inches tall... or shorter.  You can stand on a sturdy Apple Crate when you need to do eye level portraits of desperately tall people.....
Quick Note on the Nikon V1:  Now that I've done three or four charge cycles on the batteries I am getting a lot more frames per charge (fpc).  When I shot a dress rehearsal on Tues. I shot over six hundred images and the battery meter indicated that I had 72% battery charge remaining.  After shooting an additional 225 frames today, with puny flash in every frame, the counter is only down to 60%.  I think the eye level viewfinder might be much more energy efficient than the rear LCD screen.  At any right I am now, officially, happy with the battery capacity of the camera.
Posted by Kirk, Photographer/Writer at 11:25

I would be willing to bet that you are the first to do a paid gig with the wee Nikon. I beginning to believe that you do not have a comfort zone.

But Frank, the client really liked it.....

I live and learn. And I thought that "a full Apple" was when my hard drive was overflowing.

I am so impressed with what I see from the V1 that I am considering it as my travel cam. You don't seem to have run into any problems over the lack of buttons for mode change etc. If forced to choose, would you go for the EP3 or the V1?

Kirk,
I'm becoming more impressed with the Nikon 1 system everyday! Even just using the J1 at Supertarget, was impressed how easy it was to change the aperture on it,
much easier than on the EPM1 sitting next to it! Now thanks to you and Steve Huff, really considering getting it!
Jet

A new chapter, with old ink, has been written in the annals of photographic history.