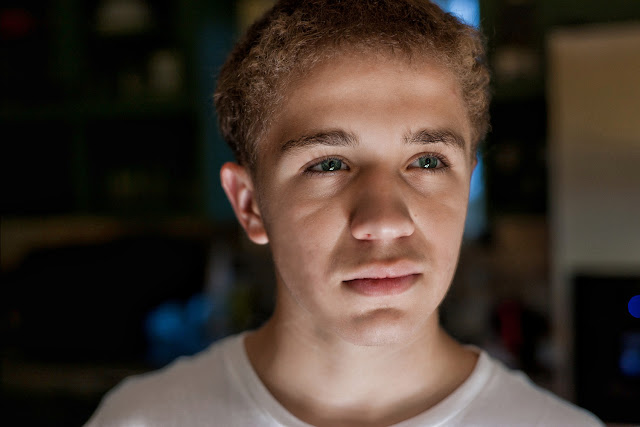 I spent the afternoon on location doing a job for a new client.  We photographed a new medical device that uses pulsing xenon light to irradiate hospital rooms with UV.  It automatically kills pathogens to reduce MRSA infections and other nasty stuff.  So we photographed in a cardiac care unit and we did images of the company officers with the product and then the product by itself.

When we added a staff person at the hospital to the shoot, at the last minute, I got to use Easy Release  on my iPhone to get a model release.  It's a cheap app but it's a life saver.  You use templates to build a model release, get the subject to sign with a stylus or their finger and it sends a PDF copy, with photo, to your e-mail address.  Nice.  Come home, print out, be legally happy and safe.

For the most part I used the tried and true Canon 5D mk2 and the 24-105L lens on this job but I brought along the New to me but not very new to anyone else, Canon 1DS mk2 to try out for a few of the shots.  I love the feel of the camera and the assurance of the focus and focus lock-in.  Judging from what I've seen in early results I really love the look of the files.  But the one thing that will take some getting used to is going backwards on LCD screens.  I gave up looking at the image on the little, pixie screen and just used the histogram for exposure assurance.  And really, isn't that what the photo gods really intended with most things digital?

When Ben and I got home (I picked him up from school so he wouldn't have to trudge home in the triple digit heat) he was standing around in the kitchen making snack and I made him stand still for just a minute or two so I could shoot some stuff nearly wide open with the light coming thru the glass French doors from the side yard.  Most of the light came from the direct light bouncing off the warm Saltillo tile floor.  Since the Saltillo tile is so warm in hue when I color balance for skin tone the daylight that shows in the window behind Ben goes quite blue.

I shot at 320 ISO and used the Zeiss lens nearly wide open.  I focused on his eyes.  And I'm very happy with both the manual focus capabilities of the camera and the sharpness of the 50mm lens.  This is a reduced file so we don't endlessly clog up Blogger but I can tell you that the full size file shows a tremendous amount of detail in Ben's eyes.

Verdict:  Love the 1DS mk2.  Glad I got one.  And it feels so good.  So now I spend the rest of my evening rushing out the post processing on this hot job.  Deadline to a major magazine on Friday.   I want to make sure my client has clean, corrected files to work with.  That's part of the reason they like paying for photography.......

Update:  Last night, after downloading the images from the card and putting the same card back in the camera and reformatting I got the dreaded "err 99" message.  For now the camera has "bricked."  So sad to pull an image I really like only to have the production tool fail.....tear falling down side of face....

New update: Sept 29th, 2011.  Got the camera back from the store, back from Canon.  Record time for repair.....less than a week.  Can't argue with the pricing, free on a five year old camera... Anyway I've used it on two jobs this week and it's a great machine. Not so great over ISO 800 but that's not what I got it for.  Lower ISO's for flesh tones?  Absolute happiness right here.
Posted by Kirk, Photographer/Writer at 18:34 11 comments: