An ad campaign for a local company. 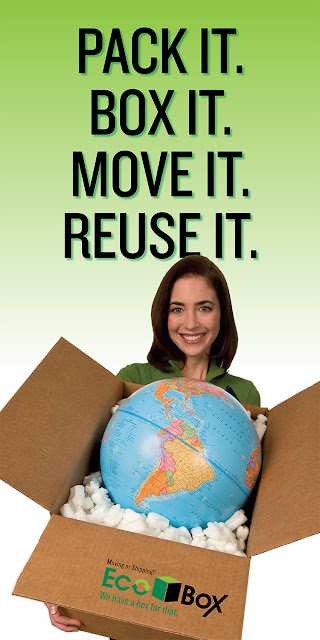 I spend a lot of time writing about artsy portraits and big concepts of sturm und drang in the field of photography but my time teaching a workshop on video showed me that most people don't care so much about hermeneutics and epistemology and would really just like me to shut up about philosophical crap and show them what we actually do most days to make a living.  So I thought I'd oblige with this fun project.  It's for a company called EcoBox that sells and recycles and resells packing boxes and all the materials you might need to move your household across town or your business across the country. 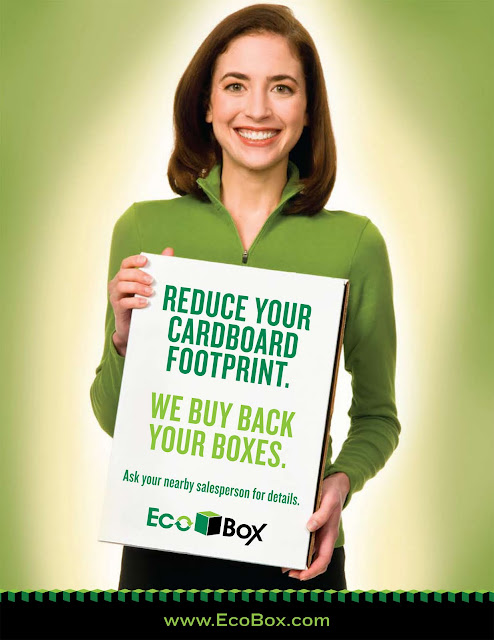 The owners of the business, like most smart business men, didn't want to spend money on stuff that didn't make a difference in the bottom line but enough demographic research showed that their biggest potential customer base was women.  Mostly women in the 30 to 45 year old age group.  We knew we wanted to use a person in all of the ads because again, research shows that an image of a person looking directly at an ad viewer gets the longest engagement and the highest recall.
We called our local talent agencies and gave them the specifications and asked for a "go see."  On a certain day all of the women that we narrowed our search to (by looking at headshots supplied by their agents...) came by and we snapped photographs of them to see how they looked on our cameras and how much they'd changed since they had their last headshot done.
The woman we chose, Kara, was a unanimous choice.  She does well in front of the camera.  She has a very pleasant aspect and her athleticism and good features make her an aspirational model for our client's demographic.  We negotiated for the various usages that we'd need and booked her for a day long shoot. 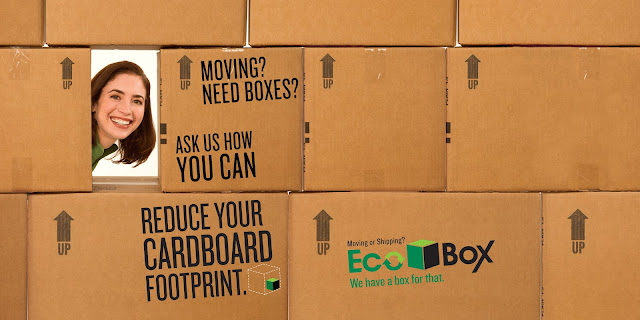 My studio is adjacent to my house in west Austin so we sometimes spill over into the house on shoots and sometimes, when we need lots and lots of space we shoot in my living room and use the studio as a make-up, wardrobe and gear storage facility.  In this situation we had the studio set up to shoot in and used our living room as a station for our make-up person and the dining room as a break room for coffee and meetings and internet silliness.  My assistant reserved two "travelers" of coffee from Starbucks the night before and went by to pick them up on her way in to work.  I had ordered a tray of baked goods from my favorite bakery and I went early to pick them up as well.  We also had juices, power bars and protein-y snacks set out.  Ben cleaned his bathroom for my clients.  We had the following people in attendance:  Greg, the art director/CD.  Amy, my assistant.  Patricia, the make up artist.  Kara, the model.  Two clients.  One account executive (who's name escapes me...).

The creative brief called for shooting everything against a white background.  Amy and I set that up first.  We used the classic technique of four lights in umbrellas with black backing cross lighting the expanse of the background.  We metered the background and moved lights and feathered them until the meter read within one half of a stop anywhere on the visible paper.  We used black panels to block any spill light and to increase the general contrast by reducing flare and spill. 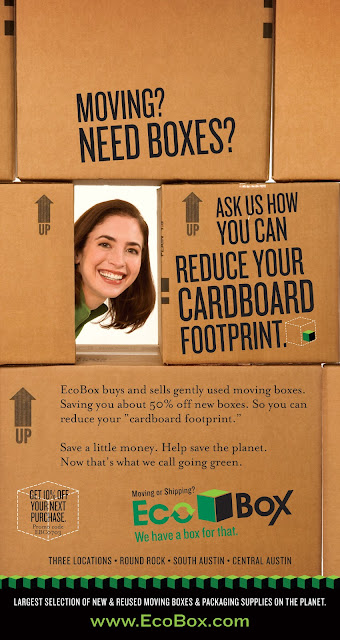 I used a large softbox to to one side of the set and a smaller box on the other side for adjustable fill.  We did everthing a step at a time.  We were careful to match the light on the product shots of boxes to the light we used one Kara.  We had a series of pencil sketches and a shot list to work from and we were methodical about checking off the boxes, one after the other.  While I was shooting Amy was setting up and tearing down the boxes we were using as props.  Patricia kept an eye on Kara and stepped in when Kara started to get shiny.  She also kept a sharp eye out for wrinkles and other wardrobe issues.
I'd shoot (I think this was all done on a Nikon D700) and then Greg and I would review a test shot on the back of the camera.  If there was a question about detail we'd tether the camera and shoot test shots which we reviewed on a 24 inch calibrated Apple Monitor.  I've learned thru experience that it's more important to be consistent in your light sources than it is to have prestigious but mixed light sources.  Now I'm shooting with Elinchrom gear but I'm pretty sure I had a bunch of Alien Bees monolights in the studio at the time (I was writing a book about studio lighting....) and we used six of them.  All set above 1/4 power to ameliorate any color temperature inconsistencies.  In work like this I prefer big, softer light sources to smaller, harder light sources.  We can also increase apparent contrast but it's much harder to increase it after the fact. 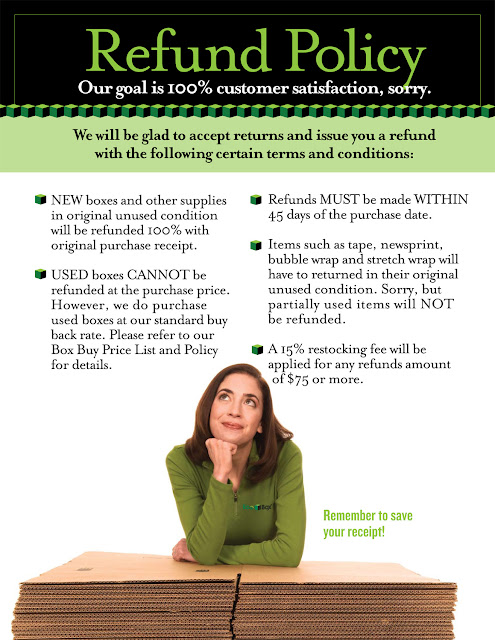 We shot everything in uncompressed RAW files so we could make sure of the color matches in post production.  I did a rough edit to throw out blinks and scowls and flat out errors and then converted to smaller jpegs and uploaded to a web gallery for Greg and the clients.  I also provided a DVD of the same Jpegs for Greg in case he wanted to use them in a PhotoShop view instead.
Once Greg narrowed down his choices he sent me over a list and some instructions to customize the images.  We work large since some of the files would end up on the sides of large trucks.  I went thru each file, matched it for color, corrected loose threads and subject faults and output the files as 16 bit PSD's.  There's a mythology that photographers deliver Tiffs and that ad agencies just drop them into place but I've found that the art directors I work with have lots of practice working with files and fine tuning them for various applications in PhotoShop.  Greg is one of those art directors.  He knew exactly what to do with 16 bit PSD files.... 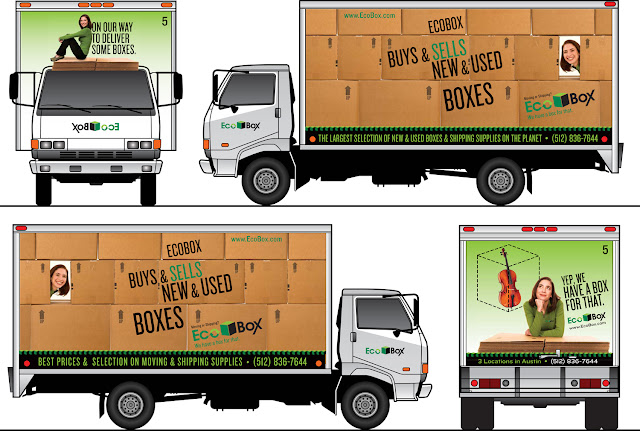 I know it's kind of silly but I still get a kick when I'm driving around town and I see one of the truck wraps with my images all over it.  I am amazed at how well planned out Greg's campaign was and, by dint of his tremendous pre-production planning, how much we were able to get done in one long day of shooting.   The clients loved the campaign and are in their second full year of use so they've long since forgotten about the relatively small cost of my production.  In the grand scheme of a long running campaign my fees will be a fraction, perhaps less than one percent of the total advertising budget.

Amy and I cleaned up the studio and the house,  we hugged everyone.  We helped the guy from EcoBox who came in the big truck to pick up all the prop boxes.  I sent thank you notes to everyone involved.  I backed up the files on another hard drive and two DVD's and then Amy and I started resetting the studio, at nine o'clock that night, for our 5:15 am head shot for an executive from Dell.  The next morning always comes faster than we think it will.  Better to be set up the night before.

I sent Greg a bill and it was exactly the same amount as the bid.  No surprises.  No angst.  The check came quickly and the job was another gold star for each of us.  That's the basic anatomy of a local advertising photo shoot.

Note:  Last weekend's workshop on Video seems to have been a big success.  The people at Precision Camera sat in and enjoyed the whole thing.  They've invited me back to do another one on the 19th of November.  Should be fun....
Posted by Kirk, Photographer/Writer at 10:19 3 comments: