Do you ever wonder why we photograph what we do? 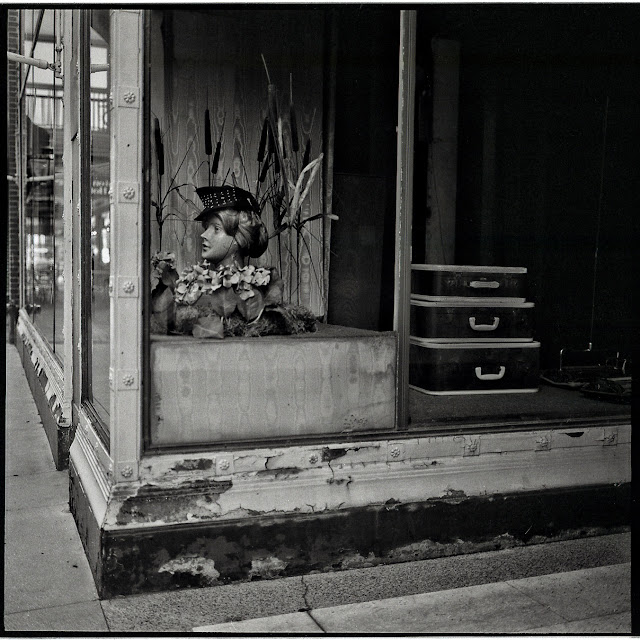 
I've been thinking a lot about what I shoot and why I'm drawn toward certain subjects.  One of the things I'm drawn to are scenes that make me melancholy about time past.  In essence every photograph we take could be construed as an attempt to cheat death, or at least catalog the existence of something before it disappears.  And many times the thing we choose to photograph has no more resonance for us other than its emotive ties to time that's already slipped by.  Maybe we catalog the past to confront our fears of the future.

Think of the times in your youth when you smuggled a camera into a rock concert and made images of the lead singer wailing away on stage.  What was your ultimate motivation?  You may say that you made a souvenir to help you always remember the experience but by taking the photographs your experience was changed from a visceral response to the moment into "recording mode."  You stepped outside the direct experiential moment and stepped back to record the passing moment.  If you really examined your motivations you might find that you were attempting to grip the moment and keep it from sliding into the quicksand of the past. A fervent desire to hold onto the glow of youth.  But no matter how well documented the moment still slipped away and left you only a two dimensional slice of time remembered that can't be re-engaged other than through imagination.

You might say that you created a "record."  But a record of what?  Proof that you were at the concert?  Proof that it all existed as you remember?  Or proof that you exist on the Moebius strip of time?  Perhaps we catalog the past to build up an emotional equity for the future.  Maybe the images we take help us believe in the forward momentum of our existence.

In early years I photographed many images that caused uncomfortable emotions for me.  I remember one image I took on contrasty slide film of an old man near the front gates of the Mercado in downtown San Antonio.  He was always somewhere near that very public area.  He had commandeered a shopping cart many years earlier and made it his own.  It was covered with cheap toys from Mexico and China which he ostensibly sold to children and their families who came to the area to listen to Mexican bands, or to eat in one of the open air restaurants.  His shopping cart also held cans and bottles that he would redeem at recycling centers.  He was old and moved slowly, with a shuffle.  He wore the same kind of worn blue work shirt every time I saw him.  He was always sitting and spent most of his time alone with his head bowed.

What drew me to photograph him other than the curiosity for an existence that an American middle class (and largely self sheltered) upbringing had effectively kept mostly hidden from me in my youth?  Was it my human need to understand the suffering and loneliness of strangers?  I postulate that I was drawn to record him because poverty, loneliness and isolation are the pervasive fears of our culture.  We dread exclusion.  We fear being left behind or discarded.  And through photography I was (unconsciously) examining the hearty and fear inducing resonance of these feelings.  They echo a fear that runs through everyone in a purely capitalist society;  that some day my usefulness to commerce will come to an end and I'll be irrelevant.

I also photographed another San Antonio downtown regular who was spent his days walking around with a homemade, wire tool that allowed him to pick up aluminum pull tabs without having to bend over.  (A quick note to young readers:  "pull tabs" were the removable tabs on soft drink and beer cans that were used before the more modern push tabs, that keep the metal connected to the can, were introduced to eliminate sharp, metal litter...).  He wore baggy clothes, danced to all the street music he came across, no matter what variety, and had hawk eyes for little slivers of metal in the gutters.  He was mentally challenged and I wondered where he lived and how he survived.  If I were really concerned for his welfare I guess I would have made inquiries but I was more fascinated with the idea of his life, intermingled with the "normal" tourists and how he interacted on the street.  If I put myself on my self-constructed analyst's couch I would dig down until my subconscious screamed out that I fear we all have some side that's vulnerable and corruptible, and I fear that mine will be discovered.  I will become one of those people who collect cans and pull tops.

My documentation of people aging, cities aging, and general temporal decay is always couched, in my mind, as a study but really it's a gnawing desire to understand the ultimate expression of decay as it relates to me.  Some day I'll die and all the photos in the world won't stop that from happening.  But the creation of images at least helps me to believe that I'll be able to delay or obfuscate the process until, in the end, I won't care.

Finally, the visual embrace, however fearfully, of an existence that is so foreign to my current condition (but not so remote as to be unthinkable)  helps me to build an empathy that I may, one day, need to turn upon myself.

Why do we photograph what we do?  To keep fear at bay?  To process visual evidence of the cycle of life?  To find our own place in the cycle?

But then, other than narcissism, why do we share it?

Isolation,  Ambiguity,  Indecision.  These are what we are pitting ourselves against. Perhaps photography can be divided into two categories:  Those images that explore our fears and those images that help us to disregard them.
Posted by Kirk, Photographer/Writer at 10:01 19 comments: