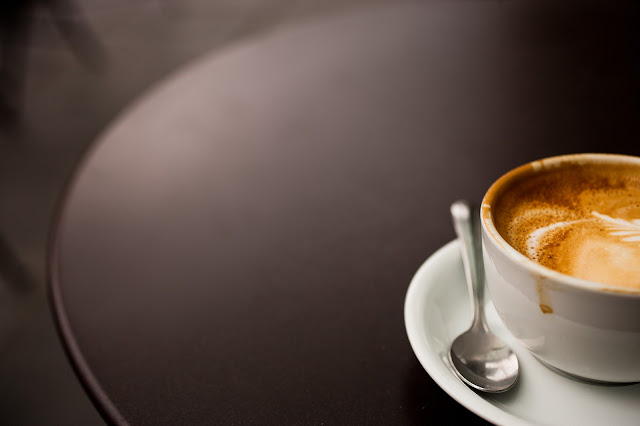 Just taking a coffee break.  This is my cappuccino at the sidewalk tables at Medici Cafe on Congress Ave. (in Austin).  The sun was on the other side of the building and the light was coming in from the overcast sky, around dusk.  I was checking messages on my phone and I liked the way everything looked when it was wonky and off balance.  It was one of those rare days when even my coffee looked good to me and I didn't want to waste it.  It was rich.
Posted by Kirk Tuck, Photographer/Writer at 21:45 14 comments: 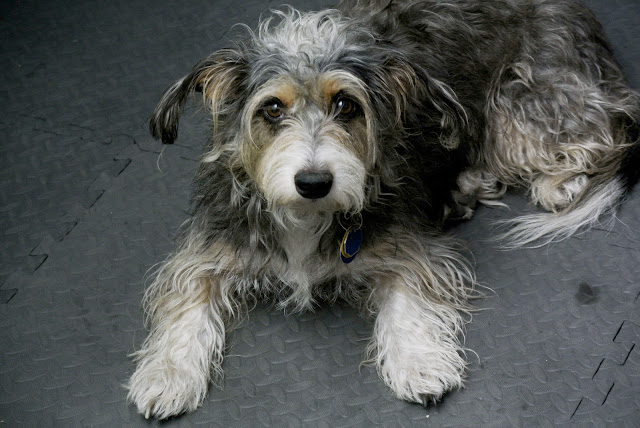 Tulip the Wonder Dog.  Nemesis of cats.  Patroller of the "holy" fence.
Tulip was in the studio this morning while I was doing a portrait of Natalie with three different cameras. I shot with the Nikon V1, the Canon 1DS mk2 and the Hasselblad 501C/M.  We were shooting with two large LED panels projecting light through a six foot by six foot diffusion scrim.  We also had one LED panel at 1/4 power on the back wall.  This shot is from the Nikon.  I'd set it to manual exposure and metered for Natalie.  Tulip was sitting on the floor nodding her approval and she looked like she needed a new headshot so I tilted the camera down and shot a few frames.  We were using the electronic shutter so the camera was absolutely (hello court photographers!!!!) 100% silent.  She didn't blink because there was no noise and, bonus, no flash.  I made one mistake, though.  I'd metered Natalie and Tulip was way down on the floor.  She ended up being underexposed by 1.35 stops.  And this was no raw file, it was Jpeg all the way.  I tossed the file into PhotoShop and with much trepidation I slid the exposure slider to the right by 1.35 stops.  Since the image was shot at ISO 400 I expected to see big, bad noise in the shadows.  It doesn't look bad to me but I like the tonality of the image, the definition of Tulip's coat and the "just right" white balance.....all under my array of CRI 80 (not very color accurate) LEDs.  The camera is very easy to use in manual exposure.  Just be sure to take a test shot at your final settings and review it before you proceed. 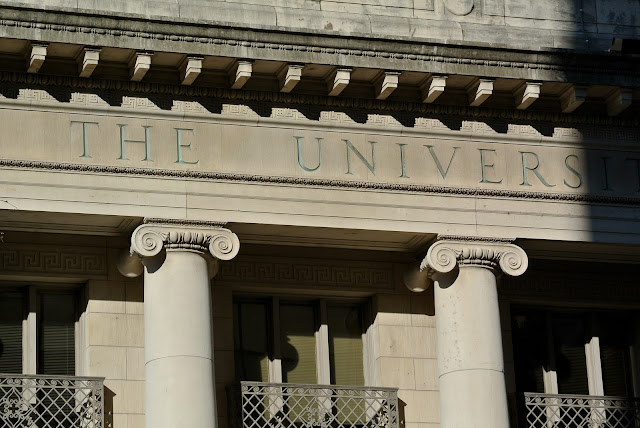 Yes.  Austin is Headquarters to the Univers(e).  It says so right here.
I've modified my camera settings since I last wrote about the little V1.  I'm now using the continuous drive setting because it does away with the preview lag of the single exposure setting.  I set the power down setting for one minute instead of 30 seconds and that's all I can think of.
I spent all day Monday making "paper doll" clipping paths for about a hundred images, and these are images I did real clipping paths for last week.  That was enough torture for me to consider taking this afternoon off for some "away from screen" time.  Today I did a walk through downtown with just the camera and the 30-110mm lens.  That thing is sharp.  At least I think it is.  I'm not "captain DXO" so I can't talk about sharpness in nerd numbers but I can say that it keeps up with my best lenses for other small systems.  And, given my caffeine rattled hands I'm going to say that the VR (it is Nikon, after all, we can hardly call it "IS") seems to do an incredible job.  Here's a big difference between the Nikon and the Olympus m4:3rds gear:  The Nikon uses "in lens" stabilization while the Olympus Pens use "in body" stabilization. While I like being able to mount any lens on the Olympus cameras and still maintain the use of stabilization I also love the way the image in the Nikon V1 finder gets all steady and calm.  You can see the VR in use with "in body" systems. 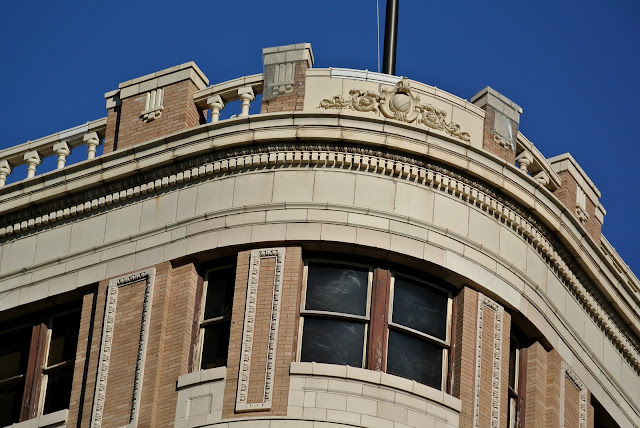 This is the Littlefield Building.  I think it looks pretty cool and it sits on a premium piece of land in Downtown Austin:  It's on the northeast corner of Congress Ave. and Sixth St. (Old Pecan St.).  One of my clients had an office there for many years.
Whenever I'm out playing with new cameras and lenses I am always drawn to the corner face of this old building.  The combination of brick and stone work shows off good lenses and makes bad ones look worse.  The 30mm to 110 mm zoom lens is the angle of view equivalent of an 81mm to 297mm zoom lens, in full frame parlance.  I think it's doing a great job here.  I love standing on the sidewalk with the camera draped over my neck, staring up at cool buildings.  Makes me look like a tourist from the hinterlands.  Sometimes I'll even stop people and ask for directions......... 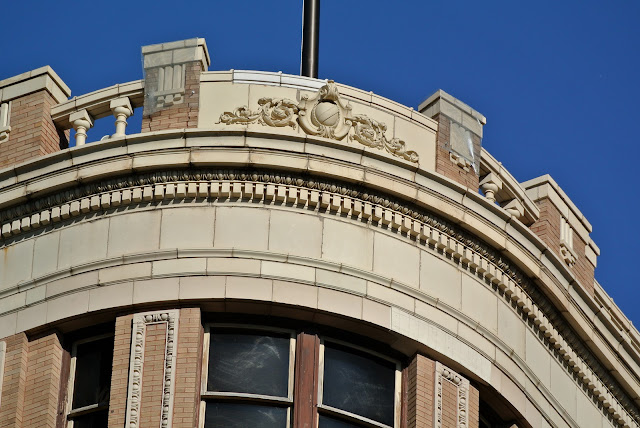 This is the 30-110 at its full extension.  I'll give it a big, "not bad!"
So, why do I care at all about these little cameras?  Why all the sudden excitement with the Nikon V1?  Well, I guess I could say that my generation has lived with continual change and I'm generally always trying to figure out how the whole system will change every time a new system arrives that disrupts the old systems and is "just good enough" to do most of the stuff we do right now with bigger and more expensive cameras.
In a few years kids of Ben's generation will buy something like this camera because the price will be right, the lenses sharp and image quality more than good enough for most of the final applications the market has in mind.  At that point, from a business point of view, they'll shift the paradigm and we can talk until we're blue in the face about "sharpness at 100%" and pixel well size but they'll be out taking photographs that meet client expectations without ever contemplating going in to debt to buy their tools.
My generation buys the best tools some times as a hedge or a delusional barrier to entry.  We (as a group) hope that our clients will notice our superior "fire power" and conclude that we're the ticket to imaging success.  I'm coming around to the idea that most clients wouldn't care if you shot your jobs with an iPhone, or on film or some other method, as long as it works for the use in front of them. 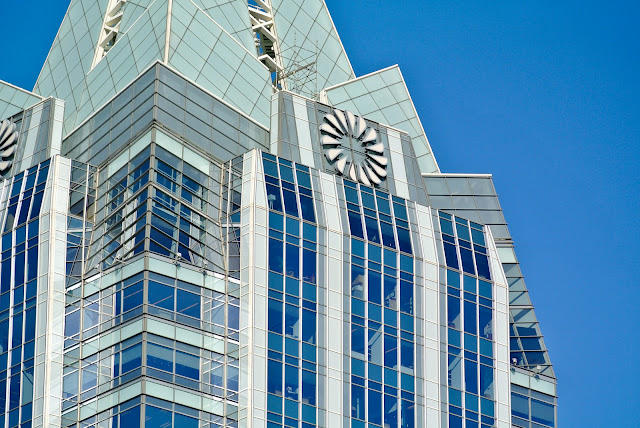 I remember a large group of photographers, eager to maintain their market position, who laid down big bucks to buy Canon 1DS Mk 3's for $8,000 only to see them supplanted by 5D Mk2's with superior image quality at $2,500 less than a year later.  And Nikon photographers who embraced the first D3's only to see the D700's come to market for several thousand less dollars.  I remember when wedding photographers were convinced that brides would never choose little Nikon D1X cameras over medium format film.  And the next generation came to market with D30's and D100's.
Every new technology is disruptive and we always have the choice of sitting back and "waiting out" the storm of introduction or jumping in and figuring out what's really cool about the new stuff.  If the whole concept is a bust well, we'll move on to something else.  But if it hits we're in the vanguard.  We get to loot and pillage while everyone else plays catch up. 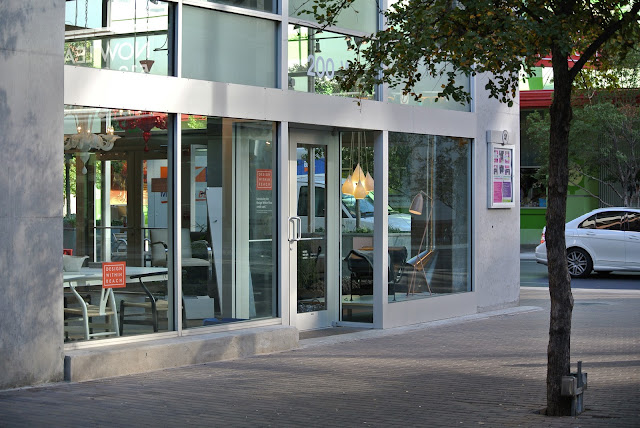 This store always gets really nice, late afternoon light.  I shoot it when I walk by to remind myself what a difference the quality of light makes.
So, what futuristic, Star Trek-like, disruptive paradigm gigging technologies does the Nikon V1 have?  I haven't played with all the buttons yet but I watched the tutorial for the 400 fps slow motion video mode and it was incredibly cool.  Like having a $100,000 Phantom camera for one one hundredth the price...(kinda...).  And I haven't wrapped my creative brain around a mode that lets you shot a frame while recording a second of video.  When you play it back you get a cool slow motion lead in to your final still frame.  I bet Ben's crew will think of something very cool to do with that....
I'm an inveterate tinkerer and experimenter.  I love to take stuff apart and see how it works.  I love to see if we can light shaving creme on fire.  I want to make giant mylar balloons and float stuff around.  Can you blame me for wanting to see what a whole new camera format is all about?
This doesn't mean I want to abandon my other cameras.  I don't want to give up shooting portraits with my Canon full frame cameras.  And certainly I love the look of my Hasselblad portraits whether clients do or not.  I'm just coming to grips with my need for variety.  Lunch yesterday was a sandwich, today some cool feta, buffalo and jalapeno pizza, and tomorrow macrobiotic vegan food at Casa de Luz.  Life without variety?  You might as well take away my coffee....
Posted by Kirk Tuck, Photographer/Writer at 18:43 18 comments:

"The Meaning of Life is to Make Life Meaningful." A.C. Grayling

This is Tulip.  She's my dog.  I'm her human.  We do things for each other and it makes both of our lives richer.
If you think about life in a pessimistic way you find yourself wondering, "Why are we born just to suffer and die."  If you think about life in an optimistic way you find yourself saying, "What's my next challenge?  How can I make this fun? What can I do to make life better and more meaningful for those around me?"  I know lots of people who live in the first camp and I'm amazed.  I know only a handful of people who live, fully, in the second camp and I'm amazed.
Our lives are like rockets.  They are self-propelled and when loaded with fuel they can leap into space.  When they run out of fuel they plunge to the earth.  The love of life and the pursuit of real meaning in life seems to be the fuel. Our problem, as modern humans, is not the final plunge back to earth but the failure to launch which consigns us to stay on the pad until our rockets rust away and are moved off into the scrap heap of eternity.
No one gets out of this alive but......possessed of an incredibly cool rocket doesn't it make a lot more sense to soar through the stratosphere and attempt to escape gravity than to wait back on the ground until all the fuel leaks out and the tubes and circuits of our space ships are rendered unusable?  We are fortunate.  We get to create our own meaning in our own lives.  We just have to have the courage to launch.  We have to be fearless.  And the opposite of fear?.......is love.
I saw a fun bumper sticker,  it had a picture of a dog.  It said, "Wag more, bark less."
How does this relate to photography?  How about this:  "Shoot with your heart, not with your brain."
Posted by Kirk Tuck, Photographer/Writer at 13:05 14 comments: