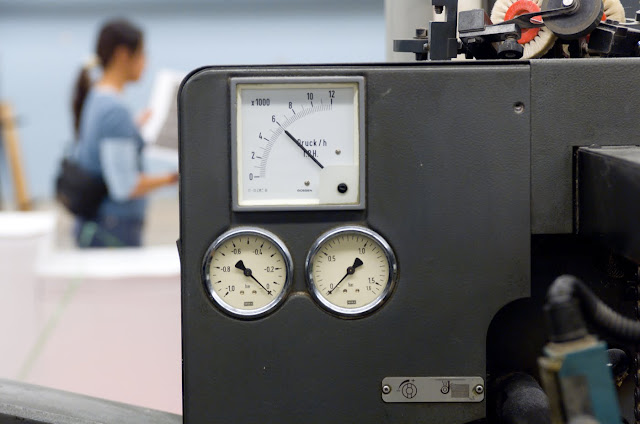 I just cringe when I read something from a photographer who's been working in a decent market for years and now they are reaching out, trying to understand why, when they are at the top of their game, surrounded with the best lights and camera equipment in the world, with a string of awards and successes, why are their billings and assignments consistently shrinking.  The rejoining comment, from many people who don't work in the field always seems to be:  "Stop whining and raise the level (meaning quality or creativity) of your photography!"  Oh, these "monday morning quarterbacks" have it all figured out.  If only we were shooting with $50,000 systems and doing everything just right we'd be able to rake in big dough.

And for about two minutes I bought into that sentiment.  But I'm rarely smart enough to take "crowd wisdom" at face value so I started going to our traditional sources of income (the ad and graphic design agencies and magazines) to do some real, shoe leather-telephone call-coffee meeting research.  And here's what I've found:

The newly ascendant art directors and designers, who are just hitting their stride in the field, were in their training periods or in school during the first collapse of the creative economy, in late 2001-2002.  The budgets evaporated just as they did again in 2007-2011.  Their bosses and their clients pushed them relentlessly to use much cheaper stock photography.  Which they did.  But what really started the ball rolling toward the gutter was when all the good schools began teaching all of these students to become highly proficient in PhotoShop.  The current "best/worst" practice in art direction, as it's practiced in nearly all but the most lofty agencies, is to have the staff search relentlessly through stock photography online to find "parts."  The parts are then assembled in layer after layer of Photoshop and then massaged and "post process designed"  to create a final image for whatever project is at hand.

Many shops have a Canon Rebel with the kit lens, or a point and shoot, or even a cellphone with a "nice" camera and they will pull in staff and friends to be "parts" for a big assemblage.  In my interviews I find that many shops think nothing of having their own people pose without paying model or talent fees.  The agencies also LIKE the idea that they can cobble together some internally generated shots and a handful of inexpensive stock shots and then have their in house PhotoShop savant put everything together because they can bill the time spent montaging and massaging, directly back to the client.  In some cases they are able to charge upwards of $150 an hour for eight or ten hours.  These are directly billable fees whereas external photography can only be marked up by a percentage.  The agency ends up owning the rights to the composited images which go into their internal library for possible recycling.  The  end cost to the final client is generally close to what the cost of custom created photography would have been but the agency wins because they are able to keep the entire revenue from the project (less the stock charges).

And make no mistake, given enough time and enough RAM and a fast enough processor, a gifted PhotoShopper can pull something really.....adequate... out of the mix most of the time.  Obviously, this doesn't work as well when the brief calls for a beautifully executed ad shot of a particular person, or an artistic shot of a unique new product but it's mainstream for ad images that are just looking to be symbolic archetypes.

The economy trained the art directors to create, essentially, a new creative product.  It's one based on nearly infinite stock photography choice and tons of post processing.  Both of which fall into the best interests of an agency since they accomplish three things:  1.  They keep the lion's share of revenue in-house.  2.  They keep an employee engaged in long periods of additional, billable work.  3.  They deliver generic concept ads under tight deadlines without taking any real risks.

It's interesting to see that a whole new style that doesn't depend on reality or believability is emerging.  And really, short of opening their own ad agencies, there's not a great deal photographers can do to combat the trend.  It's one of the reasons you see so many still shooters chasing after video projects (and conversely, the video market is so flooded with new, low cost recruits that many veteran video shooters are now starting to try their hands at still photography....).

The uninformed may exhort photographers to "raise their game!"  But it's utter nonsense.  What we're really seeing is the ongoing evolution of two giant industries, each following the same trajectory as most other businesses that have been touched by digital, the web and the relentless cost reductions implicit.

Services are delivered quicker, in higher quantity and for far less money that ever before.  And at the heart of the transition is the unabated, culture-wide acceptance of "good enough."  But that's not even fair considering that what's emerging is really not photography, per se, but a new commercial art form based on a different set of assumptions.  And that's where the schism is between generations....

I've written about these changes before and each time people outside my industry chip in that it could never happen in their industrial or service niche.  But in reality, for most businesses, it's just a matter of time.  The real secret is how well you deal with change.  And acceptance of new realities is always the first step in re-creation.

Does everything need to be shot at a zillion megapixels?  Does every delivered file have to be massaged longer than the Mona Lisa?  Are all clients worth keeping?  Has our generational idea of what constitutes a "deliverable" been passed by on the creative highway?  Are we even selling what clients want?  It's a fine beige puzzle of 10,000 squiggly pieces and we'll only know the real answers as we move forward.  If we even glean the answers at all.

I did "parts" last week.  110 clipped images that will be included in an illustrated design.  I added a CEO and a corporate President into backgrounds that I shot in another space and time.  I finished the final proofs for a book. I'm prepping for two speaking engagements and a workshop.  Nothing looks like the kind of stuff we made a living doing just ten years ago.  Or even five years ago.  But before you can change your business you have to know what is real and what is mythology.  And it's different in every section of the market.  Pick up the phone and call the next generation.  If you pay for the coffee they'll tell you what they think.

If you are a photographer all I can tell you is that everything you knew about the photography business (hyperbole caution...) is pretty much obsolete now.  Being a service provider is critical.  Finding the new markets is critical.  And, in keeping with my fascination about new technology, keeping up with new technical stuff is part of the whole equation.  Just don't use new stuff to shoot in the same old way.  To a certain extent you have to let the gear steer.


If you are shooting for your own pleasure you can ignore everything I've just written.  Until the wrecking ball comes to your house.
Posted by Kirk, Photographer/Writer at 14:59 32 comments: