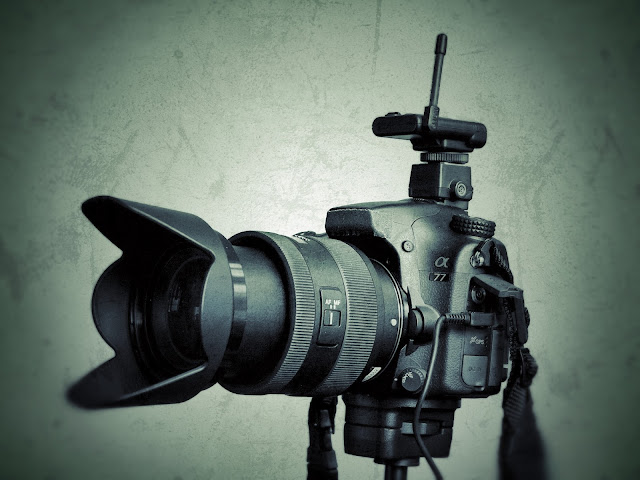 Okay.  Let's get the "attack fodder" out of the way first so the lunatics in the forums don't start howling at the moon....  Sony doesn't know who the hell I am.  They've never talked to me, called me or offered me any sort of bribe, swag, quip pro quo or payment to either buy their cameras or write about them.  Just because I'm writing about a Sony a77 doesn't mean I'm tossing out my cameras from Canon, Panasonic or Olympus.  Just because I also enjoy shooting this camera doesn't mean my affection for the micro four thirds cameras is dead in the water.  Camera bought and paid by Kirk Tuck.  It's not the world's greatest camera.  It certainly is an interesting one.

You'll remember, if you read the VSL over time, that I'm a big proponent of the idea of EVF's.  I like them a lot.  And interestingly, the first EVF camera I owned (and still own) is the Sony R1.  While the finder is no technical wonder it was my first full time "live view" camera and I like it a lot.  I still pull it out and shoot with it from time to time.

The camera that convinced me that EVF would be, is, the wave of the future in camera design was the Olympus Pen EP2 with it's stellar little VF2 accessory finder.  I love being able to view, before I shoot, all the changes that the camera will apply to the final image.  Dial in a different color temperature, see the results.  Dial in exposure comp, see the results.  The implementation on the GH2 is a bit different.  The preview only works in the manual exposure setting.  But that's okay.

I first read about the Sony a77 24 megapixels (APS-C) camera when it was announced last Sept. which prompted me to write this:  Why the Sony a77 Changes Everything.  That entry pretty much sums up why I think what Sony is doing is so game changing.  When I had the opportunity to divest some older gear at a good price I decided I would put my money where my keyboard had been and buy one with the 16-50mm f2.8 lens.

Do I like it?  Yes.  Is it perfect? No.  Will it replace everything I own?  Not hardly.  This quick report is based on my first full week of ownership and I'll probably supplement it with more as I become more conversant with the camera.

Let's talk about handling first.  This is a big, heavy camera.  More so with the big, fast zoom on the front.  The zoom is sharp.  It's centrally very sharp when used wide open and hits max sharpness about one stop down for the center two thirds of the frame.  5.6 brings in the rest.  It has distortion at the wide end.  The camera corrects this in Jpeg.  But I've been shooting in raw.  The Sony raw software will also correct it automatically.  I haven't upgraded to Lightroom 4.0 yet but I'm sure there's going to be a profile in there as well.  I like shooting with this lens but I am a portrait guy so I wish it was a little bit longer.  Tough.  I'll get a longer lens to cover the rest of the focal lengths I shoot.

The camera is stout and fat and I don't know where all the buttons are yet.  It feels good in my hands but after walking around with an Olympus Pen it feels monstrously heavy.  The fast zoom doesn't help with the weight.  It's no more ponderous than my Canon 5Dmk2 with the 24-105 attached so I guess it just goes with the territory.

The menus are incredibly straight forward and I have mastered them to the extent that I need to.

The finder is remarkably cool.  If I'm not shooting with studio flash I have the camera set to no post shot review.  And I have it set to show me exactly what I'll get when I push the button.  After using it for a day and confirming that what I'm seeing in the EVF while I'm shooting is the same thing I would see if I reviewed I am happy.  It makes for a faster shooting experience since, for all intents and purposes, you are pre-chimping.  Love it.  PRE-CHIMPING.  And when you do it in the EVF you can disguise your lack of confidence in your mastery of technique.

Once I started using the EVF on the Sony I found it hard to go back to a regular OVF on the Canon 1D series or the 5d2.  The reason is that the 2.4 million dots of the Sony finder give me a very realistic image with so much information (the info can be turned off if you want  a clean screen to look at).  I can see exactly what I'm getting all the time.  It's amazing.  It's like science fiction.  And, the finder is better than my VF2's with which I'm already quite satisfied.

The battery life is not nearly as good as the pro Canons or Nikons.  I expect to get somewhere around 500 shots per charge with the way I usually shoot.  I'll need a total of three batteries to get me through a typical still photography shooting day.  If I'm shooting video I'll want six.  But shooting video all day with a Canon 5Dmk2 I want six as well.  No big changes in on the video side.

The camera and lens are advertised as being weather resistant.  Kai on Digital Rev sloshes water all over the combination in his video from last year.  I'm not so flippant since it was actually my $2000 that went to buy the camera but I did shoot a full afternoon in downpours last saturday at SXSW.  I tried to keep the camera covered but it eventually got soaked and it's still working fine.

I hate the weird hot shoe that Sony inherited from Minolta but I found some $10 adapters and they seem to work well for flash triggers and manual flashes.  The camera also has a PC socket for good, old school sync connections.

The camera focuses very quickly, shoots even quicker and has fast frame rates. There's a "trick" frame rate at 12fps but you give up control.  The "real" top frame rate is 8 fps and that's fast enough for rational people. So, the camera is tough, water resistant, has a kick ass EVF, shoots faster than Bruce Lee punched and cycles like a rocket (with caveats). That leaves only one real question for a preliminary overview:  HOW IS THE IMAGE QUALITY?

Well..........If you shoot in the studio and you use ISO 80, 100 and 200 you'll be in the dynamic range territory of the real medium fomat cameras.  In a word, those settings make this camera stunning.  Want to shoot portraits with total control of tonality?  Done.  Super sharp and super high resolution? Done and Done.  But what about all the people for whom 1600 is low ISO and 3200 is their general comfort zone?  I have a suggestion.  It may cause people to grind their teeth at Sony.  I suggest that, if low noise at high ISO is your over riding priority for a camera that you pass on this one.  You actually start seeing a bit of noise in the shadows as low as 800 and it just gets grainier.  Now, up to 3200 the graininess is monochromatic and looks like good, old fashion film grain.  And I personally am okay with that.  But if you are coming from a Nikon D3s or a Canon 1Dmk4 you'll be appalled.  It's just not quiet.  On the other hand, the files are huge and as you down res them the noise gets down rezzed as well.  (added: I've just discovered the MF noise reduction which stands for multiple frame noise reduction.  If the subject isn't moving the camera can be made to shoot multiple frames and process them into one, throwing out all of the noise anomalies. Very cool and very effective for night scenes, etc.)

What will I do?  For now I'll use the a77 in bright light, in the studio and under controlled conditions and I'll impress the hell out of all the people who want to see flawless, super high res files.  I'll give it a try for theater photography because I love the way the camera operates. But the files will need some work in the ole noise reduction software.

Is the camera a noble effort wrapped in a "big FAIL?"  Not at all.  It may be the best camera on the market for low ISO work and for fast work.  And even though the high ISO crowd tends to yell and scream and drown everyone else out there are lots of people who get the advantages of lighting and careful technique in the pursuit of beautiful and different image quality.  I think I'll keep it.

More to come after some studio sessions.

Here's the link to the shots I did on Saturday at SXSW: http://visualsciencelab.blogspot.com/2012/03/one-of-our-favorite-barristas-at-caffe.html
Posted by Kirk, Photographer/Writer at 11:26 20 comments: