An interesting counterpoint to my Saturday SXSW shoot with the Sony a77.... 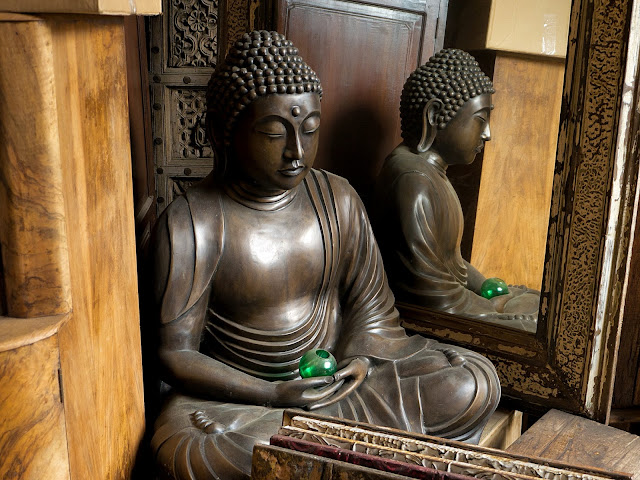 After hours of deep and tranquil meditation on the question of which camera to take downtown today I decided, in a moment of instant satori, to lay aside the bulky Sony a77 and harken back to the two most comfortable street shooting cameras in my current collection, the Panasonic GH2 and the Panasonic G3.  In the instant of satori I became enlightened about many things.  One of the them was the need to use the 14-45mm zoom on the GH2 and to honor the G3 with the 25mm Summilux.  I placed extra batteries for each camera in my pocket and headed downtown with the G3 over my left shoulder and the GH2 in my hands.  I set both cameras for face detection AF and varied the ISOs based on lighting conditions of the moment.  After a few days with the Sony I felt I'd lost weight.  The two cameras and two lenses were less weighty than my one a77 with the fast 2.8 zoom.  I saw this wonderful Buddha statue in a shop on west 6th street.  I took it as a sign that my selection process was correct. 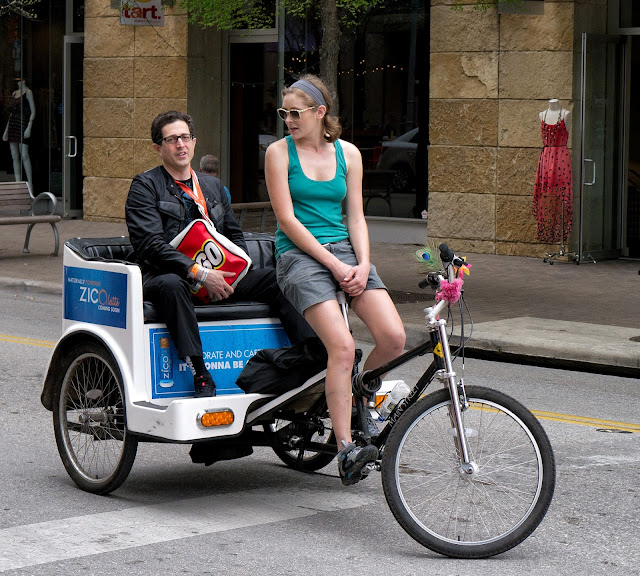 My parking karma was good today.  I found a free space just a few blocks from Whole Foods Market at 6th St. and Lamar Blvd. which I took as a sign that I should have a slice of pizza and a local IPA style beer, fresh from the taps before embarking on my personal journey of SXSW discovery.

Fortified, I set out with the intention to shoot whatever caught my eye.  I will say, at this juncture, that I ignored the G3 and the 25 Summilux entirely.  The 14-45 is a wonderful, small lens and it fits so well on the GH2.  I also upgraded the GH2 firmware to 1.1 which gives me the ability to preview all the settings in all the exposure modes instead of just at M.  Bravo to Panasonic for increasing my usability pleasure with their camera.

The Pedi-cabs are popular this year.  I could have spent the whole day just photographing my favorite combinations of cabs, customers and peddlers.
Read more »
Posted by Kirk, Photographer/Writer at 22:23 11 comments: