An interesting job with mixed light sources. On the stage. 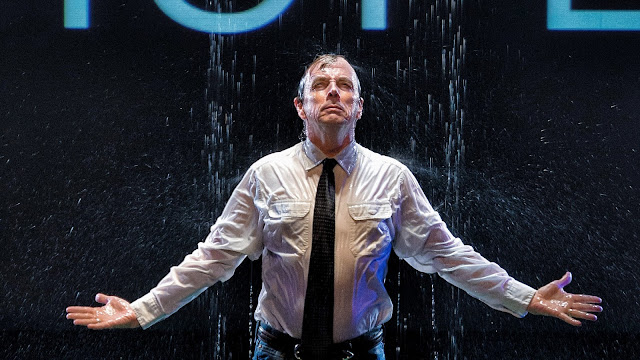 I had several assignments during the course of the day this past Friday but this set of images for Zachary Scott Theatre was the most interesting to photograph. There's a scene at the end of the play, The Laramie Project, where one of the actors (Jaston Williams, of Greater Tuna and Tuna Texas fame) stands on a square riser covered in grass and is pelted by rain as he stretches his hands out from his side.  In the context of the play it's a very powerful moment.

I saw the scene the first time ten years ago during a dress rehearsal shoot and we captured it on film.  The shot was okay but not quite what we wanted.  Then, ten years later, I shot the scene again, during a recent dress rehearsal.  Technical issues kept me from getting the shot the marketing director and I both wanted.  The spot light on the actor was too contrasty (for the camera...just right for the audience) and the letters across the back were not bright enough.  The slow shutter speed we needed in order to dig into the darkness meant that we didn't get any sort of frozen motion on the rain drops.  We knew we'd have to light the shot to get the image that we both could visualize in our heads.

I wanted to light up the rain drops and I knew I would have to do it with electronic flash to freeze the  motion of the rain.  I also knew from experience that the light from the flash would have to come from behind so that it didn't wash out the word, "hope" that was rear projected onto a screen behind Jaston.  It also occured to me that I'd have to filter the flash in order to get the color temperature of those light sources into the ball park with the stage lighting and, especially, the spot lights that were the main source of illumination for Jaston.

Finally, we needed to do all of our set up and all of our testing without Jaston in place because we didn't want him to have to spend much time at all in the water.  Even though the water is heated our supply of warm water would only last 11 minutes before the temperature dropped by 30 degrees or so... 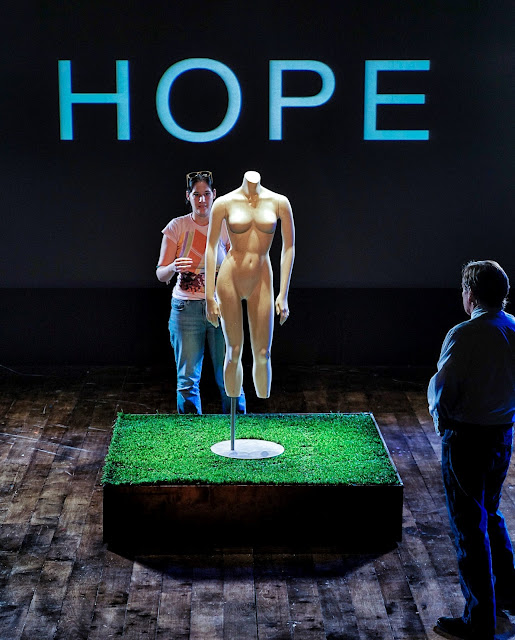 To facilitate our set up I had the crew bring in a mannequin and place it on Jaston's mark.  We put the same kind of shirt on the mannequin that Jaston would be wearing so we could look at the reflectance and  see how to best light the set up so that we didn't burn out the tops of his shoulders or plunge the bottom part of the stage into blackness.

I placed two Elinchrom monolights behind the subject position to create effective backlighting for the rain (and for Jaston).  I used small, carefully focused, umbrellas with black backings as modifiers.  Through trial and error I found a sweet spot that did what I wanted with the rain (make it stand out against the background) and didn't over light Jaston in the process.

Since the main, filtered spot lights were around 3600K (as measured by a Minolta color temperature meter) I knew I needed to add a 1/2 CTO filter to each of the flashes for a better balance.  The flashes are as far back as I can get them; nearly touching the back screen.  Each one is just out of the frame on either side.

I was using a Sony a77 camera with a 16-50mm zoom as my main camera.  I settled on ISO 320 as being a good compromise between sharpness, the mix of the flash and low noise.  I shot each frame in raw.

The main frontal illumination for Jaston came from two spot lights mounted on a catwalk overhead.  He was also lit by a bank of blue gelled spots from the rear left and right. (You can see them in one of the photos below).

Once we had the test shots sorted out and approved by both the marketing director and the artistic director for the theater we removed the mannequin, quickly mopped the stage and then had Jaston step in and get settled on his mark.  I shot a couple frames of Jaston with no rain in order to assess how the light on his face looked and then I called "places" and asked the scene manager to "cue the rain."

I shot many variations of hand and arm position but all other settings were left alone.  We knew we had the lighting and color nailed.  After we got what was called for in the initial brief I wondered what the scene would look like from about five feet higher up so we gave Jaston a little break, reset the camera position up two rows in the audience seating and went through the process again.  I liked it better because the position change helped to "move" the word in the background up which gives us a few more options in final production. 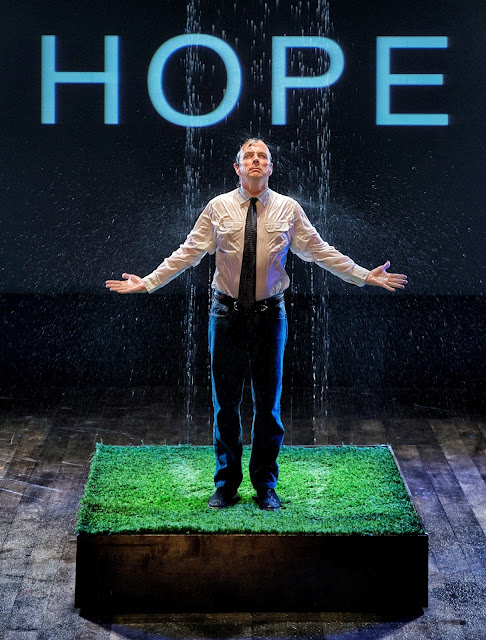 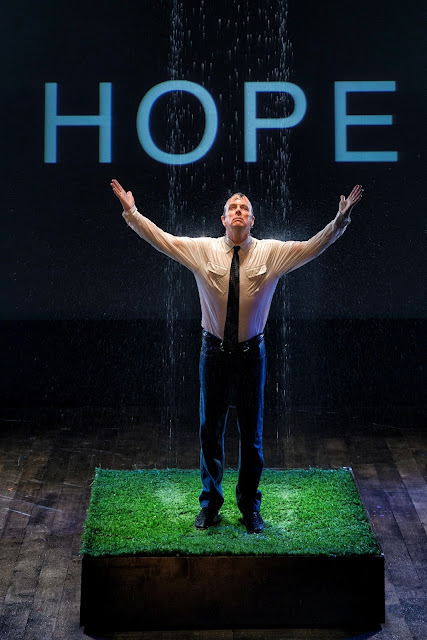 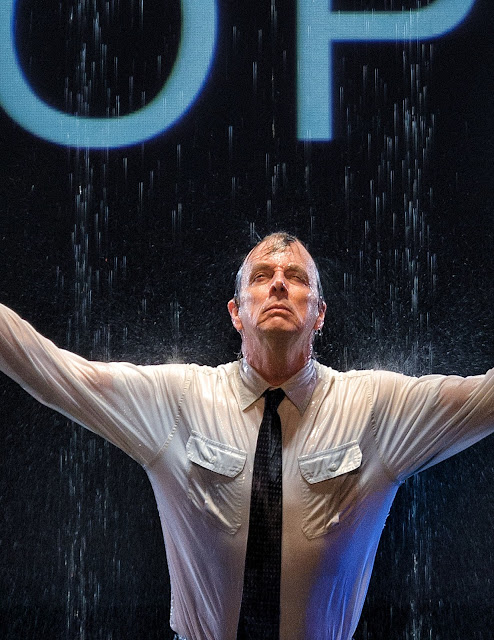 I like the way the water dances off Jaston's shoulders and trickles off his ears. We started our set up around 3:15 pm and had all the technical stuff locked down and ready by 4:00 pm.  Jaston was on the set and ready. We shot for about 15 minutes, looked at samples and declared the shoot "wrapped."  The house electrician helped wrap cables and lights while I packed cameras and lenses.

Just a few photo tech notes:  The lights were far enough away from the water so that there was little danger in them getting wet.  Even so, we made sure that both cords were plugged into a GFI socket that would trip if there was a grounding issue.  I brought a total of four lights and four stands to cover the project even though I was pretty sure I would only need two.  I triggered the flashes with a Light Waves 2 radio trigger.  I brought two sets with two extra sets of batteries.

I cut filters for the lights in 1/4 and 1/2 CTO strengths, enough to cover all four lights, so I'd be prepared for more or less filtered main stage lights.

I love working with a professional crew.  Having scenery manager who understood every hose, nut and bolt of the water prop was very efficient.  Having the house electrician at the lighting board for the theatrical lights was great.  We were able to adjust the levels to match the projected word light levels.  I love working with experienced marketing directors because they don't waste anybody's time with the newbie mantra, "Let's keep going, I'll know it when I see it."  We were on the same page from the first discussion.  And finally, working with a professional actor is so luxurious.  No nervousness.  No pretense.  Just, "Where do you want me? What is my action?  What is my affect?" Done. 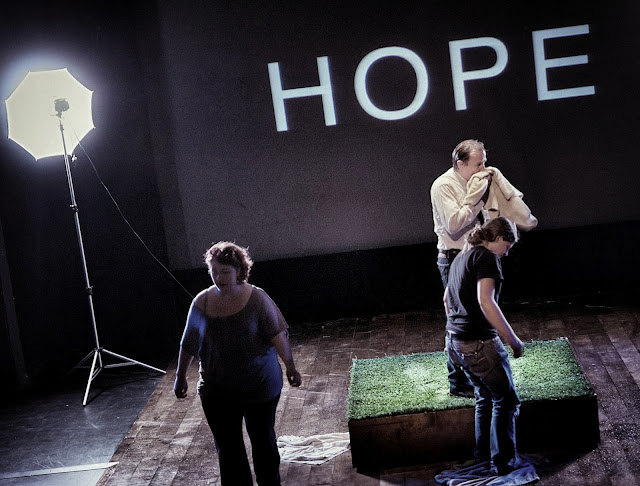 And that's a wrap.  I didn't even need to ask someone to hand the actor a towel.  It was in his hand five seconds after the rain shut off... 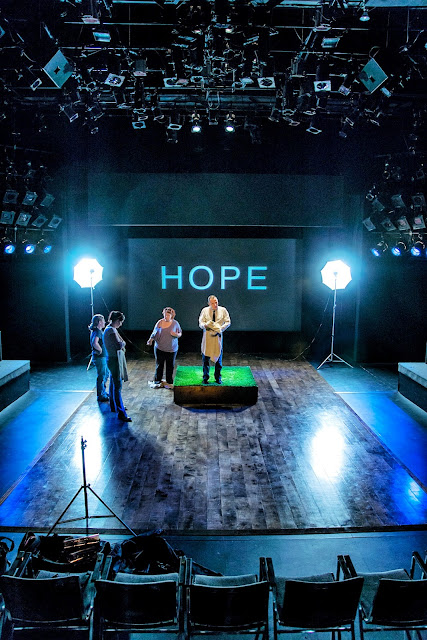 This is the final camera POV.  You can see the two umbrella augmented monolights on either side of the curtain screen.  If you look directly up from the actor you'll see the two spots that are lighting the square grass prop and the actor.  Just to the outside edge of each umbrella you'll see banks of three blue gelled lights that edge light our subject.

Thanks to all the people at Zach Scott Theatre who made this moment and thousands of other magic moments happen.

(this post was edited at 7:47 pm to reflect my changing mood.)