Who cares about camera bags? Well....I do. 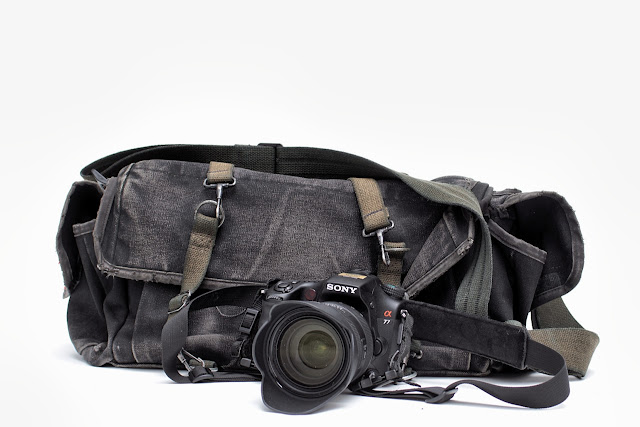 This is an old, Domke Little Bit Bigger camera bag.

I see a lot of super crappy camera bags out and about.  What the heck are you people thinking?  Seeing a huge, ballistic nylon, super-size-me bag that looks like a black shipping box rigidly swinging from a strap that has a death grip on your shoulder tells me that you didn't think that bag purchase through all the way. I know, I know, you're an engineer and you read the tests and selected a bag for maximum gear safety.  Your brand X behemoth bag can protect the contents at drops that accelerate to 20 g's.  It's bullet proof and has dedicated compartments for everything from your micro-fiber cleaning cloth to your 18-500mm zoom and your GPS something or other, and your flashlight and your cellphone(s),  and your MP3 player and a few books on lighting and a couple of sandwiches and a six pack of lite beer.   Swinging the "big bags" through an unsuspecting crowd won't win you many friends.    In term of coolness the giant, semi-rigid, b-nylon bags are the comb-overs of camera bags.  Better to just carry everything in a paper bag from the grocery store. 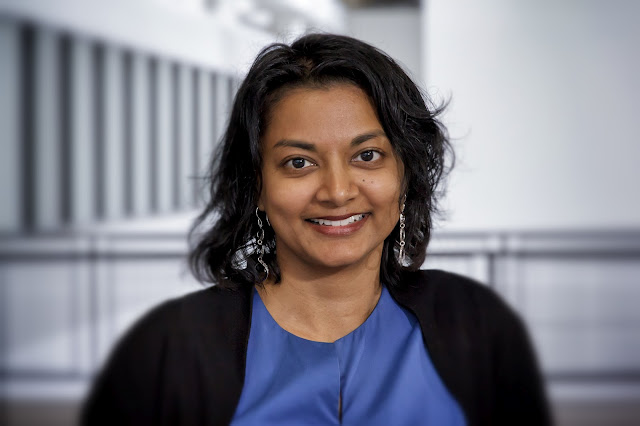 I suspect that the current generation of photographers has been raised to look at performance instead of content, the shell instead of the embedded code. When I first started working with LED light panels a couple of years ago all I heard from the still photography industry was that the LED was not a useful light because it didn't render colors as exactly as better flashes did.  The crux of the matter all came down to CRI (color rendering index).  Here again was a metric that could be brought to bear to beat down any attempt to stray from the pack.  Here was a handy metric that, like horsepower in cars, could sum up a complex array of attributes and parameters in a simple, and simple-minded, single number.  Most panels at the time had CRIs of around 81.  Noon daylight (presumably in Rochester, NY in mid summer) is the reference point of 100.  Ergo, the use of LED light panels in "good" photography was a non-starter.

I love being told I can't do something in a certain way.  It stimulates me to try anyway, figure out workarounds, leverage advantages and just have......fun. So, as soon as an eminence grise of the imaging world told me that using LED panels was foolish I was all in.  But why?

I conjecture the desire for "pure" lights is based on a flawed assumption of how "all" commercial photographers work.  While the boring ones do the same "product" over and over and over again in the studio for no other reason than to maximize efficiency and make a profit the ones I want to be like are the photographers who go out every day and problem solve.  The people who hit a location and grapple with insane mixed lighting.  The people who used to have a bag full of filters and the brains to bend existing light to their photographic will.  I've never wanted to be a photographer who just followed a lame recipe aimed at helping me ooze into the sleepy center of the boring Bell Curve.

The most exciting photography (as a practice, not necessarily for viewing...) is to go somewhere new and use a combination of existing light and "brought" light to create images that feel real and fun.  It means you have to keep your eyes and your mind open to the possibilities.

Ever since we started to walk erect and took photography out of the womb of the studio and started practicing it professionally on all kinds of locations we've had the choice of "nuking the crap out of the existing light" (meaning that we set up big flashes and totally overpower every last photon of existing light in a space) or we've practiced lighting coexistence and we've let the light on a scene inform our own lighting.  We'd seek to augment what was there already---which, in a way, seems more honest and straightforward.  As long as you don't let too many color inconsistencies bite you on the butt.  LEDs and continuous lightsources make it easier to mix and blend existing light with the light you provide.

When I started to get a handle on small, portable LEDs, I started figuring out where and when to use them best.  I knew I'd never be overpowering sunlight but I knew I could use them to tune and mold interior office lighting and interior home lighting.  I also came to know that they have real value in open shade and in the soft light created by overhangs and other sun blockers.  Their continuous nature is what appealed to me.  Seeing what I would get was much more straightforward, especially with EVF finders that would should me the global effect of my balancing act.

And I realized that, as photographers, we'd been dealing with light sources that never even approached 81 CRI for decades.  They were called fluorescent lights and they hang in ceilings across the world, flickering merrily and tossing off non-continuous spectrum like bad candy.  And pre-digital we all seemed smart enough to filter and massage that light and make good pictures.  Here are a few other facts:  Sunlight is only "sunlight" when it's directly overhead.  It changes color characteristics depending on the angle relative to our position.  Sunlight is warmer at sunset, warmer in the morning, far bluer at higher altitudes.  Its CRI is affected by cloud cover, air pollution and all the stuff it reflects from.  And interior light is no more pure.  It's generally a mix of sunlight coming through heavily tinted windows, combined with ceiling mounted fluorescent lights, some MR16 track lights, a few incandescent can lights and the blue-ish glow of the ubiquitous computer screen.  And we've been shooting and correcting for these lighting environments for decades.  On film.  With ponderous cameras and far fewer tools.

So, am I to understand that just when we've invented cameras that make color correction almost mindlessly simple we can no longer shoot with any light source that's not nuts on perfect?  That's just bullshit.

But it's all pretty much moot now as the makers of panels with thousands of points of light bring us better and more compliant instruments.  At some point we'll have to come to grips with a new reality when our LED light sources become too clean and accurate for the changing target that is "daylight."

I shot the file above with little, cheap LED panels because I wanted to shoot at wide apertures and let the background slide out of focus.  I also wanted to be able to set up quick and not run cables to power outlets.  And, I was making a point.  The point was to add just the amount of light that would give direction to the light.   The file was fun to play with when I first messed with it and delivered it to an Annual Report client.

Recently I returned to the file and ran it through Lightroom 4.2.  The color correction was painless.  The program didn't care one bit what the CRI of the predominate light source happened to be.  It just rendered the file in a very pleasing way with very little steering on my part.

All Of Kirk's Books.

Posted by Kirk, Photographer/Writer at 09:11 11 comments: