Did I mention that I really like 50mm Lenses? Really? 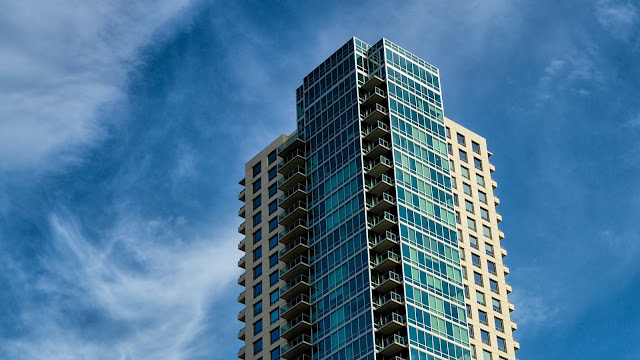 Sometimes I think buildings are just something to offset beautiful skies. I was out shooting the sky around Austin the other day and this building was near my starting and ending point. I'm not sure I like the architecture especially well but I don't dislike it. I keep coming back and shooting it because it seems to attract those beautiful cloud swirling blue skies that seem like something out of an old western movie done in Technicolor.

I was shooting with one of the cameras that keeps me from buying esoteric new toys like the Olympus OMDEM5 or the Fuji Pro 1.  It was the Sony a57 and it was sporting a 50mm 1.8 DT lens.  If you've read the blog for any amount of time you probably know that I really have an affinity for the classic 50mm lens in any of its permutations. And it's no different now that I'm shooting primarily with the Sony crop cams. 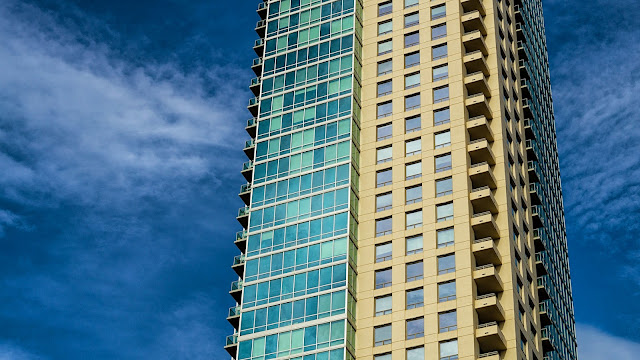 When I use a 50mm lens on a full 35mm format camera it's pleasant and neutral.  When I used it on an APS-C crop frame it's burrowing into the "nice portrait length" territory.  When I use it on a Sony a57 or a77 camera it becomes something even more flexible and special and I'd like to explain why.

There's a Jpeg-only option on these cameras called smart telecon.  It's a digital teleconverter.  On the a77 it gives you a choice of 1.4x and 2.0x magnification. The effect in the finder is seamless and there's no additional light lost as there would be with an optical teleconverter. The camera essentially just zooms in on a crop but the finder shows the crop as a full frame in the finder.  We wouldn't have used something like this in the 6 megapixel days but with the a77 I've got pixels to burn. When you set the camera to use the 1.4x setting on the smart telecon it drops the overall resolution to "M" which is still a big, healthy file.

One touch of the smart telecon switch makes my 50mm into an 84mm which is the angle of view equivalent (on APS-C sensors) of my all time favorite portrait lens, the Nikon 105mm 2.5.  If there's a drop in quality I sure can't see it.

On the a57 the control works as a digital zoom and allows a continuous range of magnifications, from the existing focal length up to 2x.

I didn't use the telecon settings on the photos above.  I changed size and perspective in a very old fashioned way.  I moved my feet and brought myself and the camera closer to the building.  It worked well.  I'll have to teach a workshop about it someday to all the people who were raised on zooms.

Why do these cameras keep me from buying other cameras? Well, there seems to always be another setting or feature I have yet to discover and I find the files to be really nice.  The way we used to think about the colors in Olympus Jpegs. All the stuff works well but the real reason is that I am curious to see what their next full frame camera will be.

My most trusted source in the camera industry (hasn't been wrong in over 20 years...) tells me that the full 35mm frame Sony is a "done deal" and should arrive this Fall.  If they do a great job with the sensor I'm ready to snap the 70-200mm 2.8 G lens on the front and get cooking.

Reading the freakin manual is a great way to unlock the astounding secrets of your camera.  Any camera. I knew that this feature was there but I thought, "amateur."  It was only when I explained the feature to Ben that I got, in a flash, why it was so cool for me. 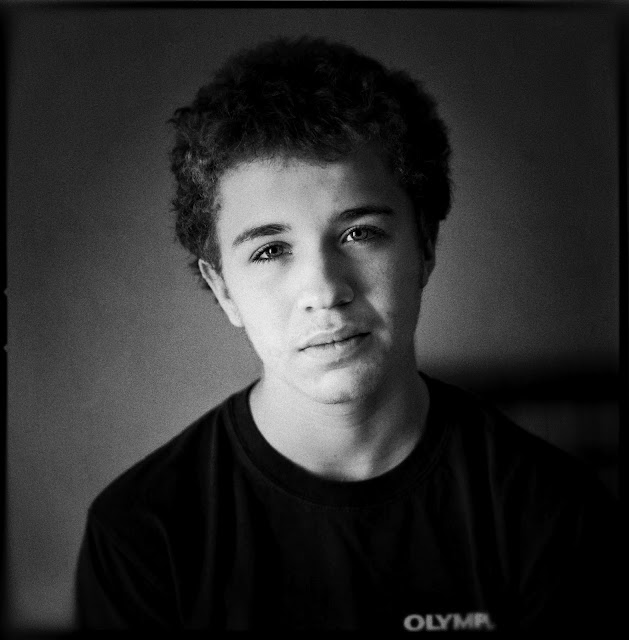 This image started life as a frame of medium format black and white film.  I walked into the house one afternoon and Ben was sitting at the dining room table working on something. I had a Hasselblad 501CM over one shoulder with an 80mm Planar lens on it.  I opened the lens up, set the shutter speed at 1/60th of a second and snapped a few frames.

When I got the developed film back from the lab I stuck this frame into the desktop scanner and did a fairly neutral and flat scan at 10 by 10 inches @300 dpi.  I scan images a little flat in order to get the longest range possible and to preserve detail in the highlights and shadows which can be more finely controlled in PhotoShop and other programs.

I "spotted" the file using the healing tool in PS before I resized the file and dragged it into SnapSeed where I banged on it for a little while. I wanted soft skin tones but I wanted good, inky shadows and most of all I wanted a nice patina of grain. I played with the slider controls till I got what I wanted and then I saved a few versions.

The conceit on the web is that everything right out of the cameras of professionals is absolutely perfect and ready to run across two pages in a glossy magazine.  Of course, nothing could be further from the truth.

Here's what the file looked like right out of the scan with no PP work: 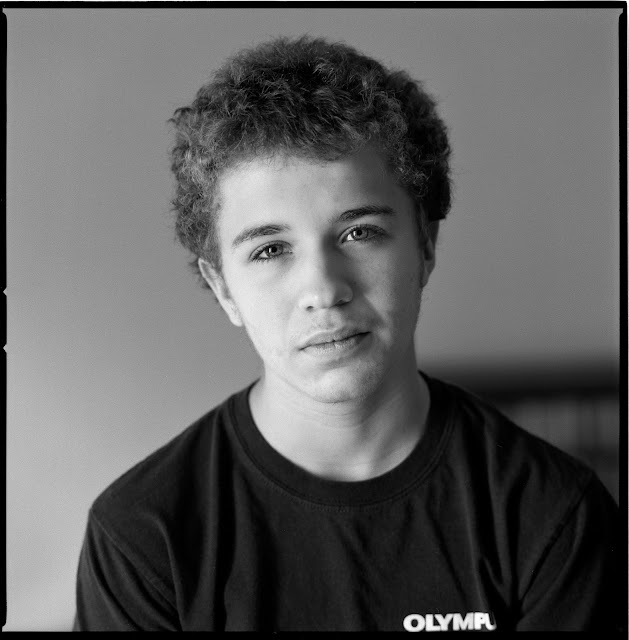 This is exactly how I would expect an enlarger print of the negative to look on #2 graded paper from a well exposed negative.  Like a negative a good digital file is the starting point for a photographer's interpretation. I like deep shadows more than I like high key presentations so the first thing I reach for is the curves control, or in Snapseed, a combination of brightness and contrast controls.

Once I have the tonal scale right I work on sharpening.  Then I work on adding grain and vignettes to drive viewers' eyes to the right quandrants.  When it seems a bit edgy and handmade I let go and save a version.

It helps sometimes to go over the top.  I played around with a more colorful "vintage" look and saved a few versions of that as well. 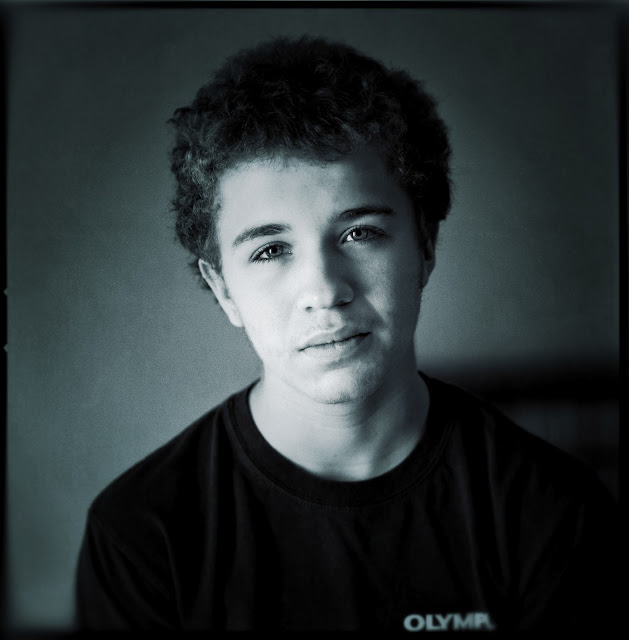 While I would have denounced such experimentation just a few years ago I'm working hard to understand and implement relevant modifications to my images that may, in fact, enhance them.  When we stop experimenting with our personal point of view and denounce every new invention and shift of cultural fashion we might as well hang it up and go somewhere to teach "how we used to do it in the old days."

Why did I start with film? The ability to hold good highlights and the wonderful fall off of focus from a sharp core here to a soft and diffused, shadowy rendition of a chair in the right side and edge of the frame.  The larger format adds a sense of increased dimensionality that I find gives the image more weight and a sense of complexity.

Can I do this with digital? Sure, but I'm privileged in that I don't have to.

A quick blog note on Ben:  He's going to start working for the rest of the Summer at Zachary Scott Theatre.  He presented a demo reel of video work that was well received and he handled himself very professionally as my grip and sound man for a recent TV commercial shoot we did together. They've asked him to come on board to shoot behind the scenes videos for the shows, construction documentation and to help edit in Final Cut Pro X for the theater's extensive online showcases.

He'll be using one of the VSL's Sony a57's (good video, great phase detection AF during video and focus peaking for decisive manual focusing- where appropriate.) He'll be using the 18-55mm kit lens, a 50mm 1.4, and he'll have access to the studio inventory if he needs something in a specialty lens. He's got his own Gitzo tripod with a fluid head that he picked up last year and he'll be recording sound with a Rode shotgun microphone. With FCPX on a recent 15 inch i7 MacBook Pro he's pretty much set to go as a one person ENG team.  We should start seeing his work online shortly.

I'll keep you posted and, if you are interested in video adventures, I might even persuade him to write a brief blog about his experiences as a 16 year old media producer.

Proud father but quick to remind him that the graphic arts are not what I have in mind for a good career.....

Fun Summer Moment:  We discussed various video formats and some sound recording techniques after my swim practice and his cross country run this morning at a favorite breakfast dive. The family that nerds out together..........