What is the real secret behind the success of the new wave of mirrorless cameras? And the OMD in particular? 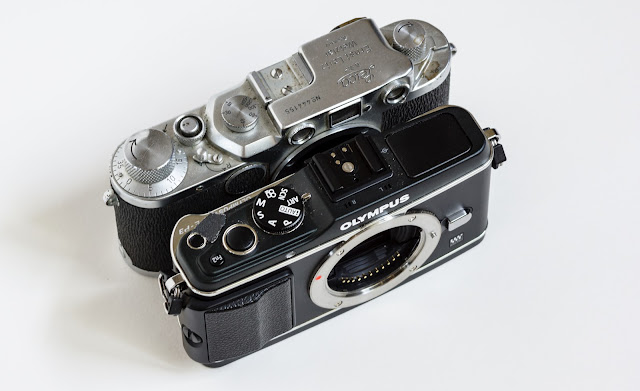 Everywhere I look, here in Austin and on the web, I see people snapping up micro four thirds cameras or writing about them and discussing them.  It started out quietly a couple of years ago with the Olympus EP1, EP2 and the Panasonic cameras and now, with the Olympus OMD it seems to be building at a feverish pace.

The OMD and the GH2 have gone a long way toward establishing the technical legitimacy of the format and its place in the modern pantheon of attractive cameras but what is it that really got the ball rolling, long before Olympus launched their 16 megapixel DSLR killer?

I know that people like smaller and lighter cameras but various form factors have come and gone.  The G series from Canon was/is popular, but not like this.  It can't be the overall performance because while the chip in the new camera is great it's still not as good as the chips in a number of APS-C cameras and it's not about to challenge the overall technical prowess of the newer full 35mm frame cameras like the D800 or the Canon 5D mk3.  But the popularity was building quickly even before the OMD was announced.

I found an old Leica screwmount body (I think it's a 2f or 3f) sitting around the studio the other day and I moved it over to the case that holds the Pen stuff.  I pulled out a Pen EP3 body and put them side by side and gosh golly!!! The dimensions were too close for coincidence.  So here's my theory:  Just a Steve Jobs had a singular vision for Apple Products (the design of which turbo charges sales)  Oscar Barnack, the inventor of the Leica, had a singular vision for his first series of cameras.  His vision revolved around the idea that you could make a small camera that would be comfortable to carry and comfortable to shoot and you could, through careful technique, come close to the image quality that you would get with the larger film format cameras of the day.

Barnack's drive to make a small but potent camera came from necessity.  He was asthmatic and tired of trying to carry a large compendium bellows view camera and tripod with him on walks through the forests near his home.  Since he worked alone, unencumbered by committees and focus groups and the input from marketing hacks he hewed to his own vision and made a camera that fit his hand perfectly.  And by extension, the hands of millions of other users.

Cameras got bigger when people (and committees and ad hacks) started demanding more attachments, more geegaws and more convenience items. More ways to sell you something new.  As we moved away from pure picture popping prowess we moved away from optimum haptics.  Optimum ergonomics.  Perfect designs for human use.  Yes, we got motor drives and we could use longer lenses and all that but the purity of the design slowly became more and more compromised and generations of photographers and consumers put up with it because they got silly stuff they never knew they needed  in return. 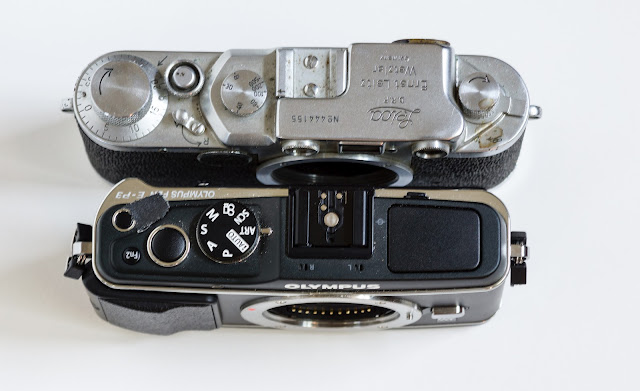 Once the camera companies hit their stride in the digital arena a curious thing happened.  When we hit a picture quality that was good enough for the masses lots of people started demanding less.  They/we were willing to give up a lot of stuff we'd been sold as part of the holy grail of photography.  A lot of people started to consider 12 megapixels good enough for most of the stuff they routinely used cameras for.  Once the camera hit this point Olympus realized that a new differentiator could be size. And design.  I suspect someone high up in their product development dept. had one of the old Leicas on the shelf and, having shot with probably every other conceivable camera in the market he came back to a nice, cherry Leica 111f and held it and decided it was absolutely perfect in conception and told/ordered his staff to shamelessly steal as much of the size and shape of the original Leicas as they could.  Not for nostalgia's sake but in deference to the genius of its original, human centric design.

In the next round of product development I think you'll see more concentration on rounding the corners of the bodies than in upgrading sensors.  When people looked at the new OMD in illustrations on the web or on the shelf many were put off by the apparent size or the design touches.  The selling of the camera has been a process of putting the camera into the hands of the customer and letting them feel the "just-right-ness" of the design.  What I hear from everyone is this, "I was on the fence till I held one in my hands...."

Another aspect of the OMD that makes me think that the Olympus powers that be ruthlessly and shamelessly have been copying from the original Leica rangefinder family is the noise that the shutter of the OMD makes when it goes off.  It's quiet, subdued and contains no piercing high frequency resonances.  If you shoot a screw mount Leica shutter and compare it you'll hear an uncanny similarity.

Even the use of the VF-2 finder in the accessory shoes of the EP2's and EP3's harkens back to a day in cameras when you needed a separate finder to use any but the normal 50mm focal length with the cameras.  When you bought a wide angle or a telephoto lens for your screw mount Leica you also bought a separate viewfinder that sat in the accessory shoe and showed you your angle of view.  The Pen series, preceding the OMD, is a modern day adaptation of that concept. 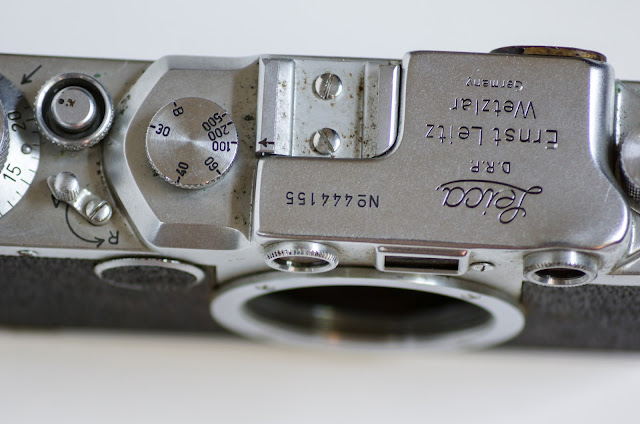 Many otherwise rational adults are buying cameras now based on how they feel and sound.  But is that irrational?  There is always a mind/body/camera connection that artists take into consideration when they adapt and embrace certain tools with which to give birth to their singular vision.  They can't turn off the feelings of attraction or repulsion of their tools just because someone tells them some aspect of performance is better or worse.  Only disengaged or casual shooters can do that.  And it's different for everyone.  The feel of a camera in the hand is unique to each person.You generally know you've found the feel in one day.

I'm sure some people think I'm making the connection between the old screwmount Leicas and the new Olympus (and other m4:3) cameras to damn Olympus for brazen design theft but nothing could be further from the truth.  What I really want to say is that Oscar Barnack had it just right, everybody fucked things up and now Olympus is reaching back to that original genius to give people what they really wanted all along:  A comfortable companion for mobile shooting.  An almost instinctual tool for capturing what you see.

I played with another OMD this week.  They are pretty darn amazing.  Not a breakthrough like the original fathers of all 35mm style cameras (Leica SM)  but a beautiful and very useful homage.

Hello Camera Designers:  No more "jellybean" cameras please.  Now that we can miniaturize nearly everything can we get some more cameras that feel just right?  Even if they don't have the biggest whatevers?

Now, if Olympus could only fix their menu.  Of course Leica shooters never had to worry about that...

Posted by Kirk, Photographer/Writer at 17:00 44 comments: