Enchiladas at Garrido's in Downtown Austin. 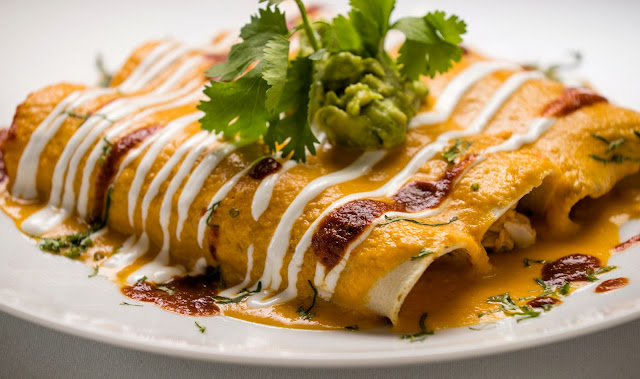 I shot these enchiladas at Garrido's restaurant in Austin. David Garrido was the executive chef at Jeffrey's before striking out on his own and creating a really great place of his own in downtown. The menu is wonderful modern Latin with nods to fine French cuisine. The prices are suprisingly affordable and the food is incredible.

As you know I've been shooting there lately for Garrido's marketing. This plate of perfect enchiladas is one of the images we shot a week and a have ago.

I used a bank of LED panels, covered with diffusion, above and slightly behind the food. Two large reflectors, just outside the live area of the shot, in front of the entrée provided light to the front of the dish.

I shot with a Sony a99 coupled with the venerable Sony 70-200mm 2.8 G lens. Everything was locked onto the stable platform of my Berlebach wooden tripod.

Posted by Kirk Tuck, Photographer/Writer at 14:36

Just curious with your choice in using the 70-200mm, is that what you regularly use for food photography?

Cool, thanks for the reply :)

Man, just when I was buzzing that the grocery story by me in Toronto is finally carrying honest to god Herdez Mexican-style salsa rather than that awful sugary ketchup goop they make for gringos, you go and post something like this.