What's the order of importance in making a beautiful portrait? 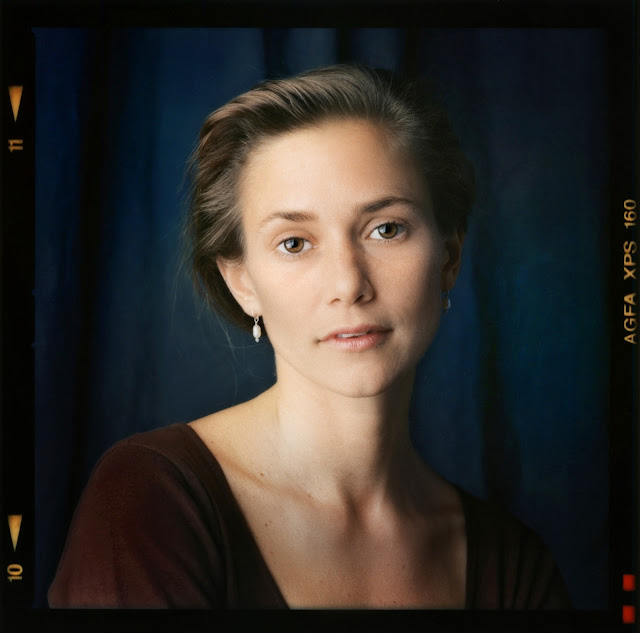 1. To recognize a beautiful face.

2. To connect with the sitter and get a real expression.

3. To create light that's not about the light but is in the service of making the sitter look their best.

4. To choose the right focal length and lens character to translate what you recognized as beauty.

What is the least important and most talked about trivia in making a portrait?

1. What brand of camera you used.

2. What brand of light you used.

4. How sharp and noiseless your image files are.

The first four matter. The last four are boring.

Knowing exactly which gear to use without bringing imagination and passion to the shoot is something like "knowing the cost of everything and the value of nothing."


Posted by Kirk Tuck, Photographer/Writer at 19:49 11 comments: Links to this post

Lady Gaga, Britney Spears, Mel Gibson and Charlie Sheen have nothing to do with this blog post. Almost.

To be honest about the blog title, I wanted to see if it's really true that you can drive outrageous numbers to your blog with the silly ploy of using the names of famous celebrities in the headline.  Blogger will probably spank me for even playing around but I think in this day and age of media silliness it's interesting to see how hidden algorithms define what we see and read..... Now on with the Sunday blog.....

I went out for a walk around noon today.  I was wearing a pair of for all mankind (#7) polarized sunglasses and, as I've noticed in the past, everything looks better thru a pair of polarized sunglasses.  Skies get dramatic, colors pop and everything gets a bit janglier.  So I took them off, even though the hot noon sun was blinding, and I spent the next two hours trying to make my camera see the way I do when I have those damn cool glasses on.  That meant cranking up the saturation and doing some mild post processing on my return to the office.  Something I rarely do.

And today, of all days, I actually evesdropped on my own fleeting thought processes as I lined up photographs.  I wanted to know, in the moment, why I took the frames (not the sunglasses, the other frames) I did as I walked around on our first hot Sunday.  And just for the hell of it I thought I'd share those thoughts with you and see if anyone was hardy enough to read all the way thru. 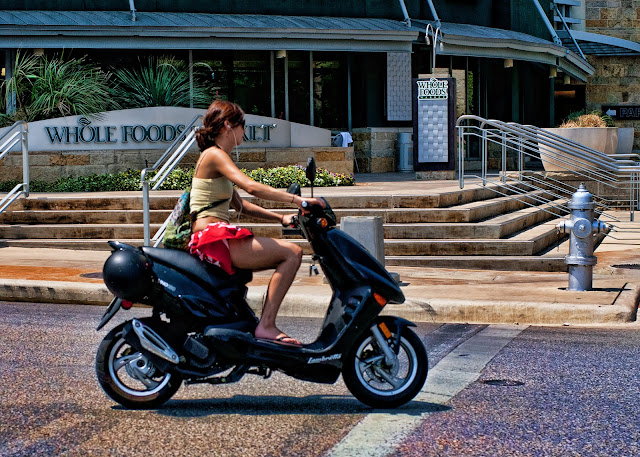 Cute girls on stylish mopeds are always a given.  Flashing by with a short red skirt on the first hot day makes for an almost autonomic response by most photographers.  For some reason Austin is wall-to-wall with scooters, mopeds, electric scooters and motorcycles this Spring.  From a fatherly point of view I wanted to shout out that she should wear a helmet, and some foot gear, and some long pants in case she had to lay that bike down.  But advice is largely wasted on youth and I was too busy manually focusing to follow thru with sage pronouncements. 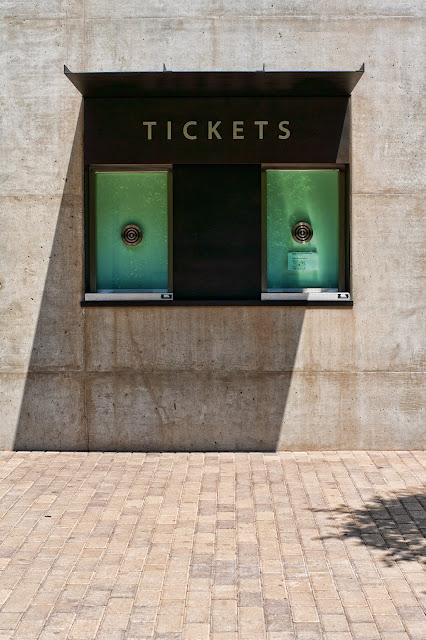 Why?  Does everyone see it?  It looks like an owl to me.  And if the architects and nature transpired together to bring off a decidedly cubist owl how can I walk away without documenting it?  I was first attracted to the slice of transluminated green on the right side window.  Then the horns on the top pushed me to stop and the glare of the endlessly concentric eyes compelled me to say, "Yes, yes, yes.  A thousand times yes!" As I bracketed a 32 exposure HDR bracketing sequence.  Then I came to my senses, deleted all but one of the exposures and figured I was actually smart enough or experienced enough (or lucky enough) to be able to get good shots that ONLY need on frame.......  I call it "Found In Baggage Claim.." 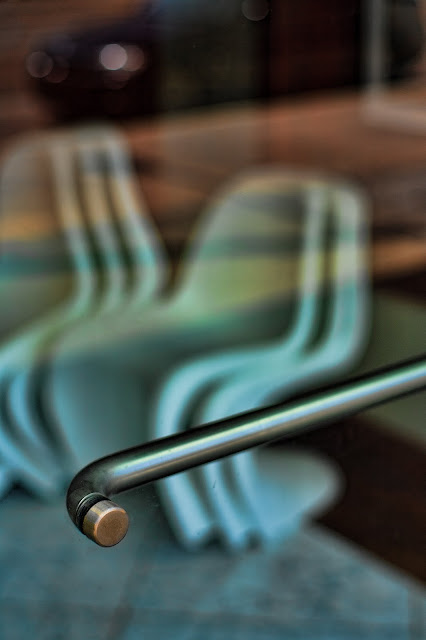 As I rounded the corner on Congress Ave.  I looked to my left and saw a long table of patrons at the bar of the restaurant on the ground floor of the Austonian.  Packed together in a line eight across were the biggest butts I'd ever seen shoved into Sunday church dresses.  Massive legs ending in fahionable high heeled shoes.  But though I'm cruel enough to write it I'm not cruel enough to stop and draw even more attention and ridicule by bringing to greater attention the plight of the enormous via photography. Even when they sit with their backsides to the giant show window, facing the main downtown street.  So I ambled along a few doors down and found these chairs stacked.  I'd been playing with the EC-S split image screen in the camera and I was amazed at how quick and easy focus was, near wide open, at the bottom of the frame.  And I thought about that instead. 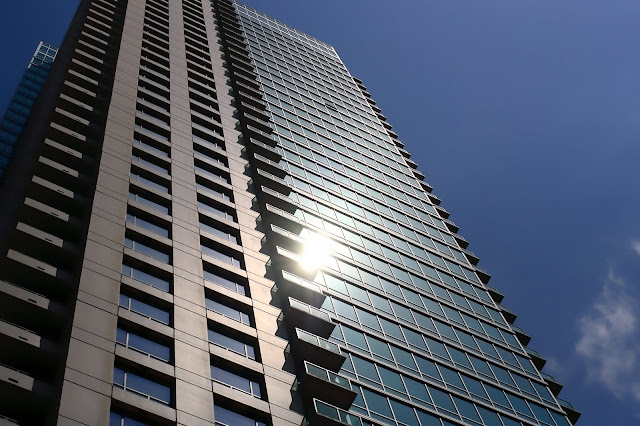 When I started out my walk I went by a tall condominium tower called, Spring.   When I glanced up I saw this intense reflection of the undiffused sun.  Most people would blink and walk away but after the trench warfare of the Olympus EPL2 review (just "Google" "Olympus Red Spots") I decided to see what the difference sized pixel wells in the Canon would do.  Voila.  No red dots.  I'm of the belief that red dots are more of a winter phenomenon..... Then I just decided I liked the angles.  And I imagined that this would be the kind of building that an Ayn Rand-y architect would build if he were working in 2011 instead of 1957.  Who can know? 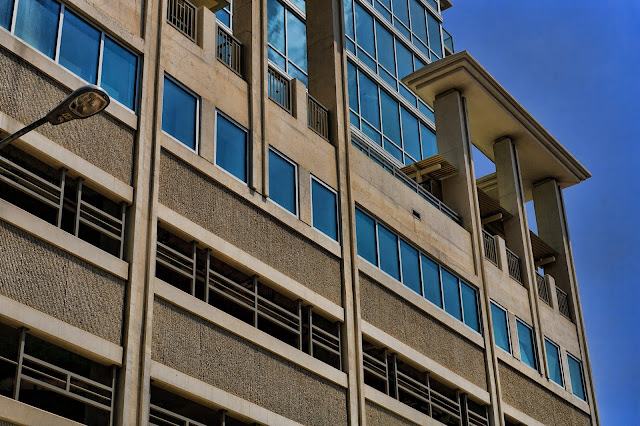 At some junction I think my brain is just attracted to strong lines and color contrasts.  And I'll shoot just about anything that fits the mold.  Kind of a "find a pattern named Waldo" with buildings.  And I'm a sucker for street lights on the corner. 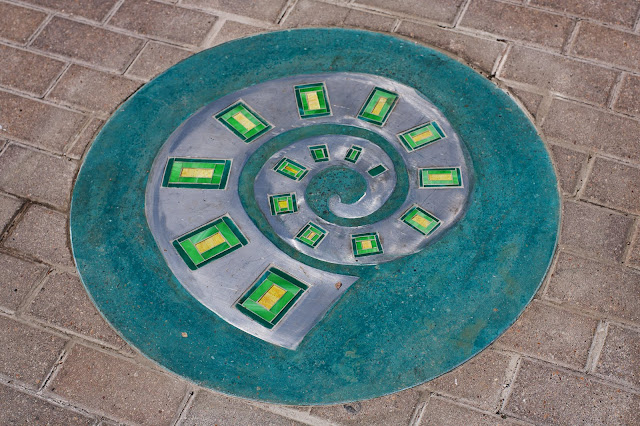 Why did I shoot this?  Was it something Susan Sontag wrote?  Or Robert Adams?  Or, Claude Levi-Strauss (From Honey to Ashes to Street Art)?  Naw.  I just love it when corporations or the city make art for everyone to enjoy downtown.  This is an inset mural on the brick sidewalk of Second Street and is one of five or sixes pieces of original art embedded on the corner.  It wasn't there two weeks ago.  I snapped the shot to share it with my local ad friends.  Strictly Photography as a communication tool. 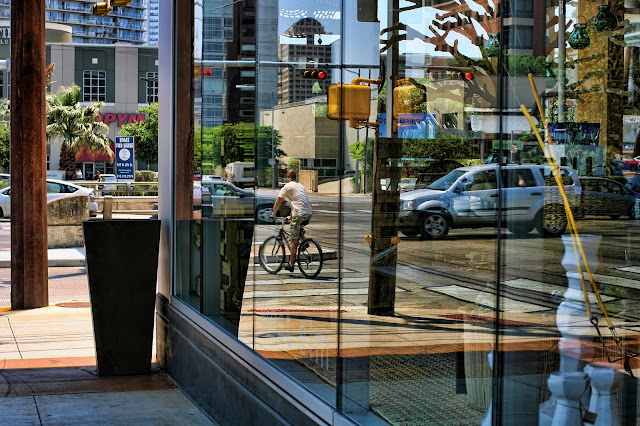 I've spent 30 years discovering, rediscovering and coming to grips with the work of photographer, Lee Freidlander, and as I walked down the sidewalk on Fifth St. thinking about cellphones and how lame the whole cellphone thing is, my mind clicked in and said, "Wow, isn't that a wild and chaotic assemblage of colors and shapes and stuff?   Shouldn't you stop being an anti-electronics snob and just shoot the damn thing?"  I was shocked at the intercession of a normally distracted brain and it was so novel to actually get some proactive juice out of it that I jumped to and snapped just as the cyclist hit the panel I wanted him in.  My brain thought it was pretty cool so I printed it just to keep him happy.  I wonder what Lee Freidlander's work would have been like if he'd worked all in color.  I wonder if this image above would have any power if it were in black and white..... 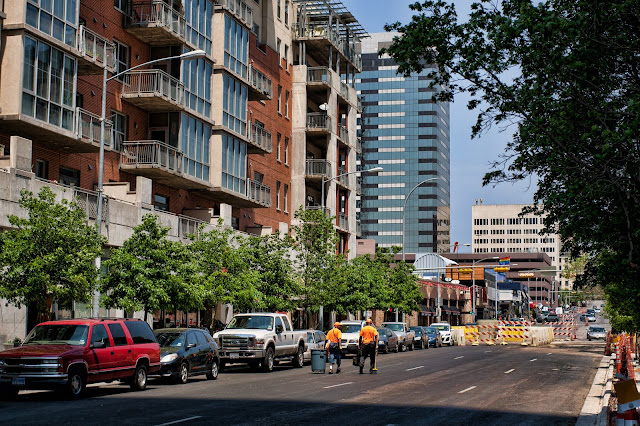 Documentary shock comes when you see something in your own town you didn't know existed.  In this case, actual street sweepers.  Shades of Paris in the 1970's.  Amazing.  I'd never seen it before so this is more of a documention of my protected lifestyle that anything else. 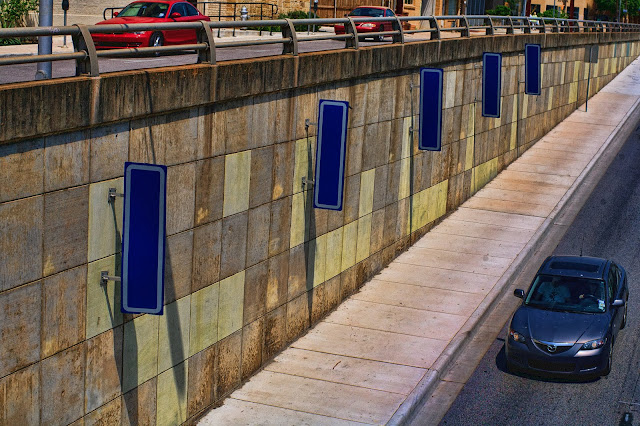 Moving along.  Nothing to say about the enigmatic art installation that's been at the intersection of Lamar Blvd. and the railroad tracks for the better part of a decade.  I shoot it to pay homage to the noble idea of art in public places.  And to mystify the drivers who sweep under the bridge, cellphone in one hand, Big Gulp(tm) in the other.  All faith placed in the steering power of their knees and the weight reducing power of 64 ounces of Diet Coke(tm). 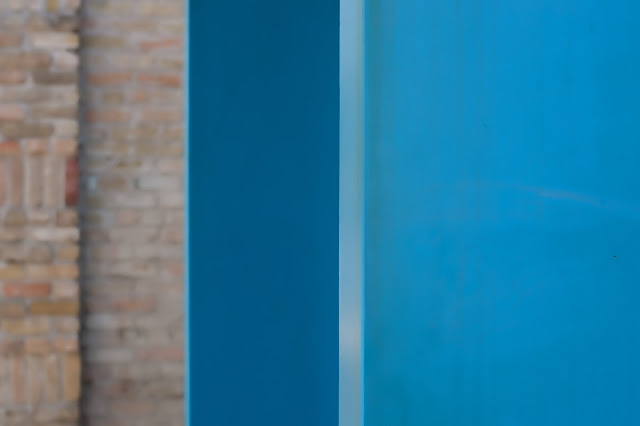 Finally, A quiet shot done at the mysterious insistence of my new focusing screen which has convinced me in short order that every time we remove something like autofocus we are not losing tools so much as gaining directness with the objects in front of the camera.  Let me say it succintly:  Autofocus works well but it's a sucky concept meant, for the most part, to assuage the fears and trepidation of people who are too lazy to learn the totally cool art of taking charge and doing their own focusing.  Not to worry.  I'll find a reason for autofocus tomorrow.

The high point of the walk was seeing a wealth of people in the downtown area eating at packed sidewalk restaurants.  The lure of downtown is getting stronger and stronger and it feels so vibrant and un-American (in a good way).  People walking for blocks.  People moving without their cars.  People being nice to each other because they don't have four thousand pounds of steel around them and so must be responsible for their own words and actions.  Amazingly equalizing.  Just what a culture needs.

I headed over to Whole Foods and had a wonderful chopped BBQ sandwich with purple onions and sweet pickles.  Washed it down with a Pale Ale (on tap) and headed home.  I continue to be more and more pleased with the old Canon 1dmk2n and the 50mm Zeiss Planar 1.4.  Used them for my walk and never entertained the thought that I might need anything else.

Shooting tomorrow and Tues. but hoping to have my Michael O'Brien video done and approved by Weds.  Hope the week treats you well.

Postscript:  I finally gave into peer pressure and bought an iPhone.  Now I can stumble thru Whole Foods transfixed to the screen, walking into other people, head-on, who are also transfixed to their screens and once in a great while I'll use the hipstamatic app on the iPhone like all the other aging photographers in their desperate attempt to recapture the cool they assumed they had sometime in the past.  Just what the world needs.....  But at least now I'm connected.....oh brother.

Posted by Kirk Tuck, Photographer/Writer at 10:00 30 comments: Links to this post