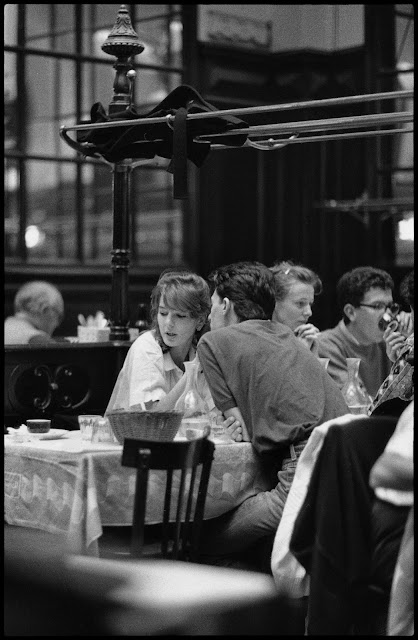 I was looking across the littered studio this morning and noticing that I'm not really a camera junkie as much as I'm a lighting junkie. As I looked through the little piles of lighting fixtures I starting into the reductive mindset that tries to eliminate clutter by pushing me to make choices and get rid of everything I don't need.

The two piles most in conflict, at the moment, are the new fluorescents over the older LED panels. They both cover the same shooting situations. They both provide continuous lighting for video and good lighting for just about everything on my bucket list. But here's what you have to know about bigger continuous lights (the ones that plug into the walls).....they require more overall stuff in your lighting package when you leave home.

If you use flash you can put each flash on one stand, then apply a softbox or an umbrella as a light modifier directly to the light fixture without having to use a second stand. When I set up my big fluorescent light or LED light there's no easy way to attach a softbox or umbrella and, honestly, I wouldn't want to if I could because it would take away too much light and drive my exposures towards lower shutter speeds or noisier ISOs.

So when you want to modify your big LED panel, or your even bigger fluorescent panel, you generally use a separate diffuser on a frame which requires a second light stand and an attachment mechanism. You gain some lighting control since you can carry a range of diffusers and nets, etc. but you definitely add to your packing craziness.  Four flashes generally means four light stands while four fluorescents generally means seven or eight light stands (you might not need two stands for the background light...) to do the same basic lighting set up. More if you want to bring along black flags and modifiers for the modifiers.

My recent excursion into the world of location video/photography required eight light stands, a background stand system and two tripods (one for the video set-up and a second for the still work). It also required collapsible frames for the 4x4 foot diffusion scrims along with clamps to hold them.

While it would be nice to light exclusively with one type of light the real world makes this difficult. If I worked only in the studio or other interior locations where sunlight was something we looked forward to seeing on our way to lunch I'd be happy enough with my new fluorescents.
But there are still a lot of assignments that require me to go on locations and balance man made light with bright sun and, for still photography, that's still the territory big, portable flashes like the 1100 watt second Elinchrom Ranger RX flashes work best in.

Then there are those more complex interior exterior locations like the CEO standing in front of a vast wall of floor to ceiling windows. She'll need to be balance with the sun drenched scene behind her and might require a few supplementary lights behind her, which is efficiently handled by three or four electronic flash mono lights.

So, even though we are now providing hybrid video/still content solutions we still need some variety in our lighting equipment to handle all the situations we seem to get into.

I'm sure some of you have leapt forward to the logical question: "Weren't you all jazzed about LEDs last year? Why now the fluorescents? Have LEDs failed?"

Hardly. But there's an analogy that's something like cellphones. The big LEDs I currently have---the ones big enough to kick out effective levels of light----are very much G1. (First Generation Technology). They require me to jump through a few hoops to make them work well. Mostly they need to be intelligently filtered. And the newest fluorescents with the latest tubes are better, color-wise, and a couple stops brighter than my three to five year old LEDs.

I looked hard and long when I started really moving into motion at replacing my current inventory with the latest panels from people like Lowell. Their Prime Light LED panels boast a 91 CRI and they are markedly brighter than my existing panels, so better light and more of it. But here's the rub, they are about $1800 each and every lighting set up I do seems to require at least three lights. That meant spending $5400 to replace my original investment of about $1200. Would they be demonstrably better? Yes. Could I make a better investment to get the same results? Yes.

When I visited the Museum of Art in Boston, Greg Heins showed me the Alzo fluorescent lights that his photography and video department use for video programming and interview. Very good light, requiring very little correction and about a third the cost of premium LEDs for the same three light set up. Most of the advantage for the Alzo lights come from a new generation of fluorescent tubes so I started to research all the options and came up with the Fotodiox version. I give up dimming controls but gain a price advantage.

I've used the flo's on six or seven mixed video and photography assignments in the last month and they are working out well. My one concern (and this is where LEDs absolutely rule) is hauling all of those oh-so-very-breakable glass light tubes around. I think breakage is inevitable with the tubes and hardly possible with the LEDs.

There's a second area in which LEDs have all other light sources beaten, hands down. And that's using them with batteries. My smaller LEDs, the color changing Fotodiox 312AS panels use two standard, camcorder batteries for power and can light at full power for around two continuous hours. No other light source is anywhere near as efficient. Which means I have to keep my case full of these lights for those kinds of run and gun shoots where plugging in and accessory light stands are just not in the cards.

And that brings me to the stack of "hot lights" I have sitting over in the other corner. Why the heck am I keeping these primordial light fixtures around?  Well.......first of all they keep me warm in the winter when I use them (just kidding, not a good reason...). But really, I have several Lowell Totalights, a Lowell DP light and three of the Lowell VIP lights that fold up for cartage. I use them for the times when  wall of LEDs or Fluorescents isn't enough for a special application.
Sometimes you just want raw power and, though they are hardly efficient, for their size and relatively minor investmentm, they can really push a lot of photons through big diffusers. They're my go to lights when I need to shoot continuous and I need both low, noise free ISOs combined with medium to high apertures.

So far I'm counting a number of systems here. Two kinds of LEDs. Fluorescents, High Powered-battery powered Electronic Flash, Electronic Flash mono lights and a pile of hot lights (tungsten).
But we really don't stop there. We have to consider the portable speedlights. We have a couple of the big Sony flashes because they work well on and off camera and can be used wirelessly. Then there's also a motley collection of manual-mostly speed lights along with radio triggers, that are left over from the Strobist/Minimalist lighting days.

I use the speed lights for candid shots at events and though it seems like this market is in an off cycle right now I'm sure it will swing around again when I least expected. For their size the on and off camera flashes are a potent lighting tool. Without (real) modeling lights and fast recycling they won't take the place of studio flashes and with their 100-200 watt second flash power they won't replace the large Elinchrom Rangers in sunlight but they sure are handy to have when following an executive around a trade show or whipping up good light for an impromptu portrait.

So, of all these things how can I best consolidate in order to pacify that part of my brain that's rebelling against the clutter and demanding some rationalizing of the vast VSL lighting inventory? I've decided that the first generation LED panels must go.

I'm going to sell them locally for some price that makes no sense. Live in or around Austin and want to play with 500 bulb panels or 1000 bulb panels? I'm asking $100 per smaller panel and $150 each for the two bigger panels. I won't ship them because they are too bulky and heavy to make it sensible. I also hate to pack stuff. If you want them you can e-mail me and we'll meet up.
Take them all and we'll price the lot accordingly.   Edit: the LEDs have been sold. Thanks.

Posted by Kirk, Photographer/Writer at 10:57 3 comments: