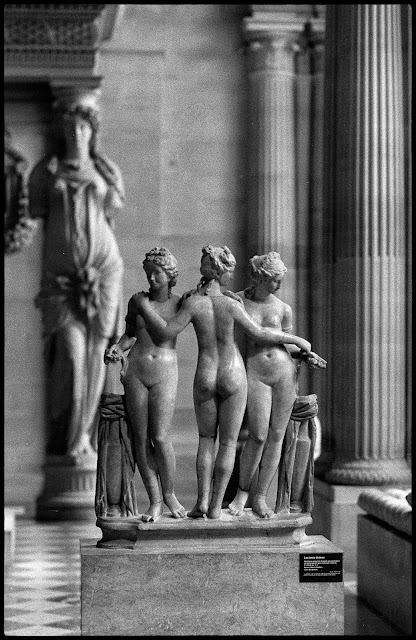 I confess that I love to photograph sculpture. From the Bernini pieces in the Borghese Sculpture museum to the Rodin Museum to the ancient Asian examples at the San Antonio Museum of art I am fascinated by all kinds of sculpture.

Often, when I read that the death of photography is approaching I remember that all the arts have been through ebbs and flows and all of them have, at one time or another, been declared dead except for sculpture. And I wonder what it is about sculpture that  grants a collective immunity to it.

I think it may be the difficulty of working in marble or granite, or even with castings. The capability of working to the level at which Bernini did is all but lost in the modern age and it's our fascination with what we can't do that elevates this art to a more impregnable perch. I can no more imagine taking a chisel and hammer and making a home made version of the Pietå than I can making my own deep space passenger rocket in my garage.

I have to wonder though whether the evolution of 3D printing will eventually make sculpture for everyman as accessible as taking still photographs. I imagine a time in the near future when a typical person will walk around his naked girlfriend clicking off frames that will later be sequenced and integrated into a 3D CAD program and them set up to be rendered by a printing machine.

Not a two dimensional printer but one that works in all physical dimensions. One that can, unaided, build statues and sculptures as well as guns and pottery. The technology is here, now, and is becoming more financially accessible every year.

I imagine a time in the not too distant future when new apps and CAD plug-ins will appear that will allow you to INSTAGRAM your sculptures and have them rendered with pre-programmed actions and filters. Click this filter for late Renaissance, click that one for Etruscan, click this setting for modern abstract. Perhaps there will be a button that just wraps pre-made sculptures in cloth. The Cristo filter for conceptual artists....

But I imagine that once done the methods will lose their intrigue because, like current photography, most people's art-in-a-box will look like everyone else's. And the work that is significantly different will retain value.

In the meantime I intend to look at as much sculpture by old and new masters as I can. Then I'll be ready to write series of articles about the GOLDEN DAYS OF PRE-DIGITAL SCULPTURE.
I shudder to think that sometime in the near future I'll drive through neighborhoods and people will all have their digi-sculptures in their front yards, much like we have every photographic permutation resident on the web in the sharing galleries. From soup to nuts.

Most yards will have sculptures of pets and varying degrees of chubby and homely children. Or spouses in odd drapings. Perhaps the masses will revive the Roman and Greek tradition of painting the statues. Perhaps the style will be more and more heightened realism and eventually we won't know if the sculpture in the front yard is live or just a three D replica. If the sculpture is of someone checking their cellphone will there be a difference?

Ah, the march of progress. What would the three Graces have to say about all of this? They would probably tell me to stop the negative daydreaming and just concentrate on what I want to do. And they'd be right...


Posted by Kirk Tuck, Photographer/Writer at 12:27

Thanks for an interesting and thoughtful perspective....hope you're not actually super-prescient on this one!

One of the interesting things about sculpture is how it actually mediates between 2 and 3 dimensionality - it's often made to be seen from particular positions but you can still walk around it - which is one of the things that makes it so interesting to photograph. I suspect that what the brigades of 3-d-printing "artists" who would make objectively correct renderings of their pets and naked girlfriends would miss is how most great sculptures distort reality for aesthetic or material purpose; think of Michelangelo's version of the Pieta where there's absolutely no way the figure of Jesus would balance in that position, and if he were 5'10" Mary would be something like 11" tall, and yet the whole works beautifully as an aesthetic object.

Thank you, Theaterculture, you made my day.

"If the sculpture is of someone checking their cellphone will there be a difference?"

Ahhh...Bernini. I had known him primarily as the architect of the Vatican's Piazza San Pietro and the Baldachin. And then I visited the Borghese and had to pick my jaw up ff the floor. Amazing how he turned stone into flesh and defied gravity...

His Daphne and Apollo changed my appreciation of art and mastery forever. An hour in the Borghese sculpture gallery is worth a trip to Rome. Beyond amazing.