Making a conference fun? Just do the math. 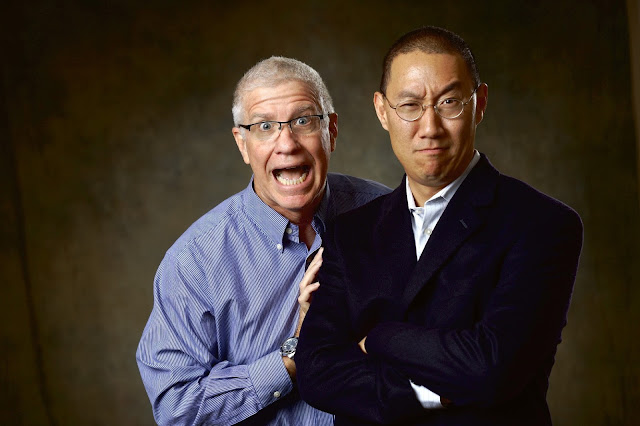 One of the things I love about my job is the enormous variety of people I get to meet and work with. This is a photograph of Stan and me. Stan is a professor of mathematics in California and a reader of the VSL blog. Stan recommended me for an assignment here in Austin. It was a conference about math education and we just wrapped up our third and final day a little after noon today. As you might infer from the images above and below part of the assignment called for me to set up a "studio" in one conference room and spend part of yesterday making portraits of organization's board members, officers and other VIPs. Most of our efforts were much more serious than these shown and I tried to be on my best behavior for most of the event. I even wore socks.

Here's how this event worked. The framework was something like this: start each day with a general session in the main ballroom of the AT&T conference center (on the UT campus) and hear presentations from distinguished speakers. Then each day gets divided up into series of short and direct "break out" sessions where speakers work in 15 minute cycles and share best practices, new methodologies and insights with their colleagues. Interspersed at wide intervals are meals, snacks and the occasional, large joint session. My brief included getting at least five good shots of every presenter (spread across four rooms on two floors and running concurrently...) as well as casual images of the attendees networking, sharing and hanging out.

The organizational portraits were another layer.

On the first day I arrived in the parking garage and loaded up the cart. If you work on location and you don't have a good, four wheel cart to haul your light stands, lights, tripod, cameras, posing stool and half case of Red Bull (kidding) then you are just wearing yourself down and you should stop reading right here until you've ordered a good cart. Mine is a Multi Cart, I've had it for at least 10 years. It's indestructible and folds down enough to fit gracefully in the back of my car. Since I wanted to basically bring along a complete portrait studio I packed: four Elinchrom D-Lite 4it 400w/s monolights, extension cords, reflectors, umbrellas, grids, and  diffusion scrims. Along with a background and background stand system, a pneumatic posing stool and some extra tungsten lights that the production company mentioned they might need. Not an unreasonable amount of gear but maybe five or six trips back and forth to the car if you don't have a cart...

Of course I can never decide what to bring, camera-wise, so I brought an assortment with which to play. The most used camera/lens combination was the Sony a99+Sony 70-200mm 2.8G lens because it gave me just the right amount of reach for close podium shots and high sharpness even when shooting wide open and fully zoomed out to 200mm. Noise was very, very well controlled at ISO 3200 and perfectly acceptable (and usable in dark rooms) at ISO 6400. The "big two" camera makers don't have a lock on clean, high ISO files...

The next most used camera for the first two days was the Sony a58, coupled with the Rokinon 85mm 1.5 Cine lens and it was amazingly fun to use. I'd put the camera in manual exposure mode, have a preset custom white balance for the podium of the main room and I'd bring the camera up to my eye with the manual aperture ring wide open and then I'd roll the aperture down toward f4 until the image in the EVF was perfect. Then I'd shoot. The whole procedure takes much longer to write but effectively gave me absolutely perfect exposures every single time I hit the shutter button.

The external, manual aperture ring was like magic. You could see the exposure firm up as you watched and you knew just where to stop. I also liked working with the manual focusing, coupled with focus peaking. As I racked the ultra smooth (not fly by wire) focusing ring I could see little glistens of red come into being on the edges of a subject's glasses or even in the reflection of the highlight in the subject's eyes and know beyond a shadow of a doubt that the camera and I were both focusing on exactly what I wanted to have in focus. Once I started working this way with the 85mm and got such rock solid fine focus results I also took the 70-200mm off AF and worked with it in the same way. Control is a wonderful thing! Especially with very narrow DOF.

I brought along a few other lenses, including the Rokinon 35mm 1.5 Cine lens, the Sony 20mm and various wide to medium focal length fast zooms. But the 85 and the 70/200 easily saw the most use.

Before I started using the LED EVF cameras I was always torn about which way to go for file format at events. I am a.......promiscuous shooter and I figure that if 500 frames in a day is good then a thousand must be twice as good. At least it gives me a statistical advantage vis-a-vis overcoming blinks and awkward facial expressions. So, in the days of 6 megapixel sensors and so-so Jpeg performance (along with bad LCD monitors) there was always the motivation to shoot raw. The cameras back then didn't give you enough fast and accurate feedback to nail color and perfect exposure every time and it was comforting to be able to rescue miscues and mistakes with raw converters.

Since acquiring and testing both the Sony a99 and the a58 I've abandoned that philosophy and put in the extra work to get the images right in large, superfine jpeg format. (The a58 has only "fine" but it's "fine" is much better than the jpegs I've gotten out of other brands I've used so I'm pretty happy).  The jpegs from my cameras clock in between 6.5 and 10 megabytes apiece while the raw files from the camera range in the +/- 25-30 megabyte range and that's enough of a difference in storage and processing to make a big difference when confronted with the need to edit 2500 to 3000 files from an event.

Since I had my cart and a safe spot to leave gear I also brought along the Sony a850 which I am perennially testing out with the 50mm 1.4 Sony lens, along with the newest addition to the family, the Samsung NX 300 and it's happy kit lens. That camera and lens combination does really good image stabilization and it's 3200 ISO is also quite usable. Better by a long shot than the same ISO setting on the a850.

As I was learning the light in the four main rooms I'd be shooting in I worked with an old Leitz Tiltall monopod with a Leica ballhead for added stability but I tried not to forget that camera movement is only half the equation and subject movement (which punks both camera support and IS) is the other half of the equation. I found that, with IS in the a99 enabled, I could mostly get sharp exposures with the long lens at speeds down to 1/30th of a second, reliably but the movement of my subjects effectively limited my lower shutter speed to around 1/125th and, with highly kinetic speakers (hands waving and constantly moving) 180th or even 1/250th worked better. I could have used more flash but I find it intrusive at conferences and I'd rather go up on the ISO and grapple with noise, if necessary. Fortunately only one of the four rooms required me to either go beyond ISO 3200 or use flash.

Since I use a lot of LED, Fluorescent and studio flash lighting in my usual business routines I hadn't done much in the way of testing out the combination of the a99 and the HVL 60 flash but I did use it in one of the rooms to overcome the sheer lack of light and the overall color balance and exposure worked flawlessly. At one point I finally had to deal with the temperature shut down issue with the flash. I'd cycled it at full power to bounce it off a far wall and a ceiling that was a good 25 feet high. After a cumulative series of 20 flashes the unit shut down and showed me a thermometer icon on the back panel. Of course I had an HVL 58 in the camera bag, with the adapter for the a99 on the foot and all ready to go but I didn't need to reach for it. The 60 came back on line in a matter of a few minutes and worked the rest of the day (with me using it under the conditions that Sony recommends) without any other incidents. I am reading Gary Friedman's book on the a99 again to come to grips with the remote flash capabilities of the combination of flashes and cameras I own and I'll write about that in the near future.

While the conference kept me moving and busy for two and a half days we were well treated by the event committee. (by "we" I don't mean the "royal" we I mean me, the photographer; the sound man and the videographers who were part of the AV team helping to make the conference a success....). We ate our meals with the academicians, took breaks when the attendees took breaks and generally enjoyed a very collegial atmosphere. The food was great, the venue gorgeous and the exact opposite of frantic, and the sense of purpose for the general good gave the event a positive vibe that made the work more enjoyable. It's wonderful to understand that probably every single participant at the conference was there to help teach, or learn to teach, our children advanced math in new and better ways. I'm more used to conferences that are about how to profit from technology so this point of view was refreshing, to say the least.

In the end I shot around 3000 shots and edited down to 2000. About 20 minutes after the last speaker concluded and the event broke up I handed Stan a 16 gigabyte thumb drive with all the images on it. Ten minutes later I handed another one to the production company and a third to a strategic partner for the show. I'll still need to back everything up and make an archive but I'm happy that everyone has materials in their hands for immediate use. 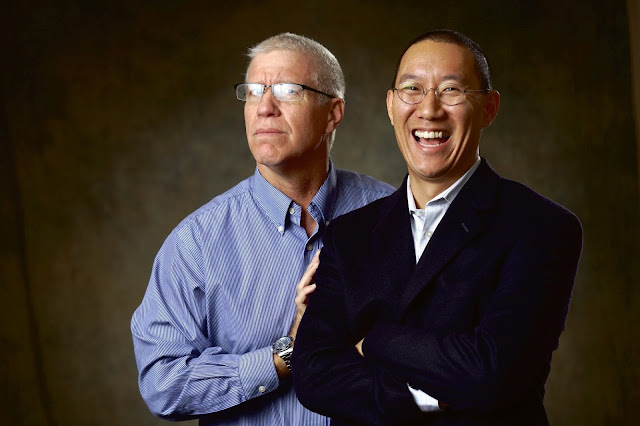 Once I said good bye to the new friends I'd made I headed back downstairs to break down our makeshift studio, load up the cart and trek back toward my part of town. I'll chalk this one up as one of the most fun conferences I've done this year. And one of the least stressful. And that's a wonderful thing. One bonus: absolutely no "pie" jokes. So I'll write one now:

A Texas Aggie (student at Texas A&M University; alma mater of Gov. Rick Perry) went home to visit his parents. His father asked him about his studies. "What did you learn at that fancy school?" His son beamed and said, "We learned pi r squared."   The father looked a bit frustrated and shook his head. "Son, " he said. "Jalapeno cornbread are square. Pie are round." Bada Boom. 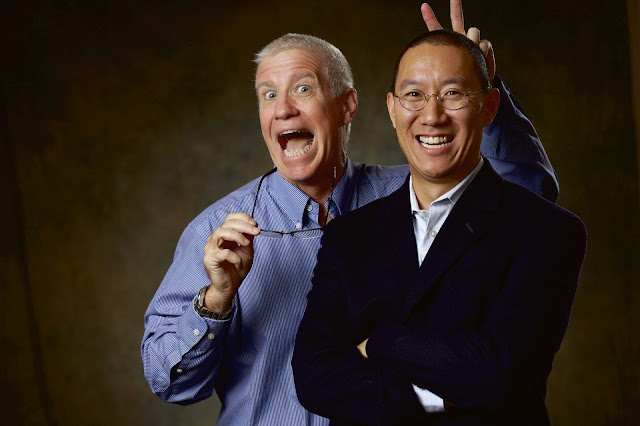 A big thanks to Stan and all the Mathemateers. Thank you.

Posted by Kirk, Photographer/Writer at 17:58 11 comments: