Why architects put reflective glass in the windows of big buildings... 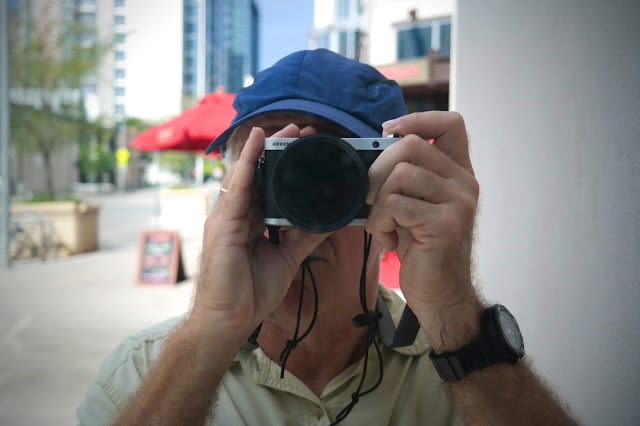 I thought we'd get right down to best practices and stunning technique in this particular post. As you may know I've been auditioning the Samsung NX300 at the request of their U.S. public relations agency and while this is certainly not intended as a review or even mini-review of the camera itself I will say that the jpegs files I get from the camera are exemplary. Sharpest in their class and also very good (though understated) in contrast and overall tonality. When I add contrast in post the files smile, and when I add a little saturation to the same files I smile even more.

But what I'd like to call attention to today is my stance and the way I am holding the camera. I have tried ATMTX's suggestion to "Use the Force.." and just stick my arms out in front of me with the camera at the end of a long set of shaky levers but it's really a non-starting solution; an attempt to make a bad ergonomic situation just a little better. I'm talking about the fact that the camera has no EVF nor any potential to add an EVF and one finds oneself falling back on what we call, "The Stinky Baby Diaper Hold" and all of the missteps that entails....from a physics point of view. Why the arm extension? Chalk that up to being over 40 and needing the almost universal reading glasses... 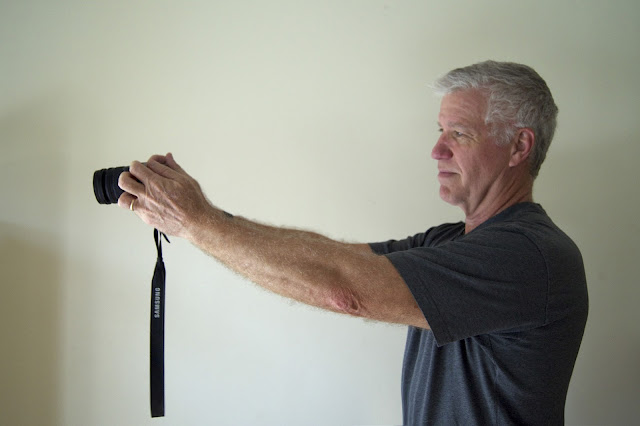 But I am using the camera with, for me, great success. I basically take along my Hoodman Loupe and press it against the back of the camera in order to compose. The loupe blocks out extraneous light which means that I can really evaluate an image or preview under bright sun, in the field. And more importantly it allows me to press the whole package to my face with my arms in a much more physiologically stable posture which presumably gives me more consistent and controlled compositions with much less camera movement. 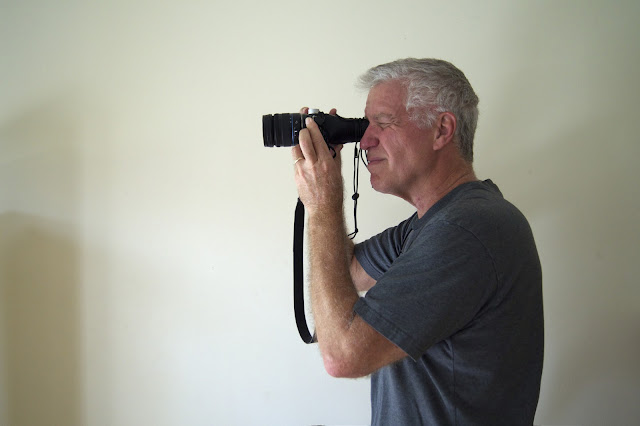 Unless you have the eyes of a fifteen year old and have never known the sybaritic pleasures of well made coffee there is no way that the SBDH can hold a candle (or much of anything else) to the correct hold on your camera.

But if you must do the stinky baby diaper hold, or the radioactive cellphone offset hold, you might want to complete the ruse by adding another prop/accessory, the SBDH utility gloves. Available in most sizes and ready to hold steady any non-EVF imaging toy or tool. Or use in the changing of stinky diapers.  (See below). 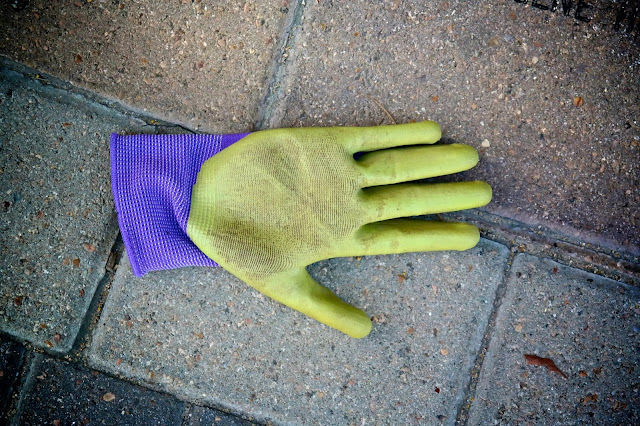 Seriously, I like the NX300. I really do. But why Samsung chose to go with a camera that doesn't have the option of an Electronic Viewfinder mystifies me.  Thank goodness for the Hoodman Loupe. I guess since the camera is mine I could super glue the loupe to the back but that would defeat the whole idea of the touch screen. Another first world concern...

Posted by Kirk, Photographer/Writer at 15:49 21 comments:

Don't get too used to all those new "convenience" features in our new cameras.... 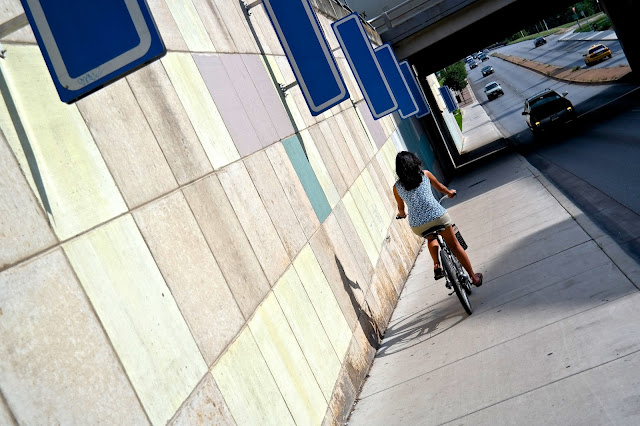 See what happens when you get used to using the in-camera level indicators and then you accidentally push the display button and they vanish at the wrong moment? Tragic. I was trying to get everything lined up on the screen and they were gone....the little lines in the center that turn green when you've got your camera held level. And it couldn't have come at a worse time. It was mid-composition. Now I live in terror. What if the auto-composition controls go on strike? Will everything I shoot seem subtly out of whack? Better to not become addicted in the first place but now I sound like one of those guys who wanted to smash the machines. I guess there has to be some balance somewhere...

Speaking of weird stuff. My Samsung NX300 and my Sony NEX 6 both have some sort of built in wi-fi and I finally figured it all out. So, you have to be near your phone and you have to download an app and you have to configure your camera to send the app to your phone which you can then use to relay your image into the interwebs with fumbling alacrity. It takes ten or fifteen seconds, over the most nimble connection, to transfer a 20 megapixel file so it's not exactly a speedy proposition for a guy who likes to hold down the magic shutter button....

Strangely, it does work. But equally strange to me is the idea that anyone would want to do that unless this is your idea of the new paradigm of breaking new photography. For art? I think we can all wait until we get home, snuggle up with our laptops and a nice glass of wine and push all the big boy buttons. But that's just my opinion. I am sure that in just days I'll be back telling you that immediacy is the new black, and that I could no more live without camera wi-fi than I can now live without in camera levels or in camera auto composition. Stay tuned. Literally.
Posted by Kirk, Photographer/Writer at 13:50 12 comments: 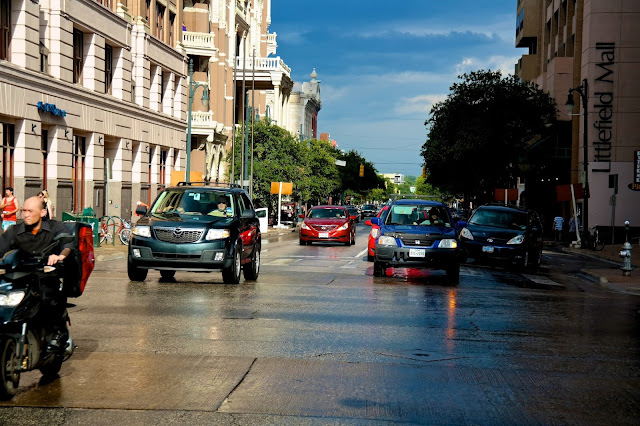 I decided that my street photography had gotten boring. It had turned into a habit. I decided that a really committed street photographer should embrace the whole idea of the "street" and not the safety of the sidewalk. To that end I've started randomly walking out into traffic, turning to face the oncoming cars and then shooting with reckless abandon. The image above was taken Saturday afternoon. It had just rained which gave me some nice street reflections to work with. It also made the roads slicker and made the whole adventure much more riveting for me and the drivers.

After a number of near misses a peace officer dropped by to counsel me on my artistic undertaking and to suggest that the middle of a four way intersection on a busy street might pose overwhelming challenges to my project. I pulled out my double spaced, multiple page artist's statement  (AKA: The Street Shooter's Manifesto) and after he read, with interest, every single word he just shook his head and drove off.

I will say that, at times, the abject fear of death wreaks havoc on my usually nimble photographic skills... There was one candy apple red Mustang that was heading straight for me and I noticed that the driver was looking absently at a text instead of me. The car was heading toward me at forty miles per hour and it's a good thing I zone focused because I'm not sure the contrast detection autofocus is that good at objects coming straight for the camera. Fortunately it must have been a very short text because the driver looked up and then locked up the brakes. Unfortunately the buffer on my camera was full and I couldn't capture the passenger side of the car as it whipped around me into an adjacent lane, nudging, just barely, a cute little powder blue Prius.

Part of the subtle texture of this sort of in your face street photography is the colorful language the drivers hurl my way. It makes the whole process of doing this kind of art seem very, very interactive. I've been recording clips on a digital audio recorder but carrying the extra gear, and having to minister to it, reduces my agility and ability to gain the sidewalk in those many moments (especially during rush hour) when people are either oblivious to obstacles on the road or not at all into the whole idea of kinetic and challenging art forms.

I am hoping this new kind of street photography catches on. Especially with iPhone-o-graphers. It's so immediate and the risk makes it so much hipper than just trawling for static images of slow moving life.  You'll never feel the same sort of rush if you're just documenting your lunch...  The thing I think is most fun, if you have a driver's license, is that one can plumb both sides of the process: from workflow to traffic flow. Whichever side of the wheel you find yourself the newest idea in street photography may mean that soon we are ALL part of the art process.

I'm thinking of specializing in a certain esoteric form of this new street photography. There's a little known niche that deals with just left turn lanes. Might need a different selection of cameras to really master that one.

( Don't try this at home! Because most homes don't have streets running through them.)

#NX300 This was inspired by my tests with the Samsung NX300. With only an LCD finder you really have to work hard on street-o-graphy, especially in bright sun.

Posted by Kirk, Photographer/Writer at 13:40 10 comments: