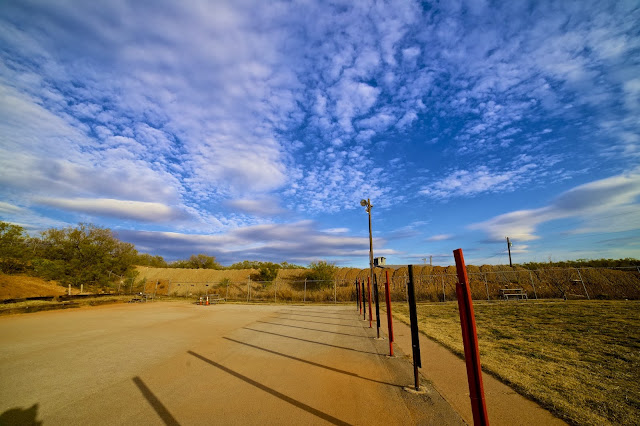 We got lost a couple of times. Once when trying to find the wastewater treatment plant outside Abilene and another time trying to find a park but when we finally got our sense of the layout of Abilene we had no trouble finding the pistol and rifle ranges for the Abilene Police Department. It was fun (in a very American way) to photograph cadets and officers firing magazine after magazine at various kinds of targets. Some targets were engaged from static positions and others required the officers to move laterally while shooting.

I may have been wearing my safety glasses and a set of ear protectors but it didn't stop me from seeing this amazing cloudy sky just a quarter of an hour before the onset of sunset. I put down the GH3 and the telephoto zoom and grabbed the Sony a99 with the zany Rokinon 14mm and tried a few shots. I was happy with the result. This is one of those fun lenses that pushes one to try it over and over again with all kinds of subject matter until you basically burn out on the effect and go back to your regular way of engaging. But I'm still in the fascination period and having a blast making skies look dramatic.

Posted by Kirk, Photographer/Writer at 14:25 4 comments:

I had fun in Abilene and enjoyed using a new system and a new lens on an existing camera.

Concrete Expert. From an Annual Report three years ago.

I'll quickly admit that I'm more comfortable with medium telephoto lenses than with very wide angle lenses any day of the week. But that being said I'd like to talk about my new "favorite" lens, the 14mm t3.5 Rokinon Cine wide angle.  It's a lens I bought in anticipation of an upcoming project. I've been talking to a potential client who makes CT scanners about making video programming in some very tight spaces where their machines are installed. We're talking about very large machines in very small spaces. I've done a number of still images in similar installations and no matter how wide a lens I bring I always wished it was just a little bit wider...

I'm hoping to use the lens on a Sony a99, mounted on a slider, for the wide, overall shots that are critical to establishing the video.  Like all projects, nothing is certain until the ink is on a contract and we're watching the red light blink on the location. But it's always best to get some practice with a new tool so you have and idea of what are can do with a lens when you get onto an actual location. With that in mind I stuffed the 14mm and the Sony a99 into the left side of my big Domke bag and took it along with me on my assignment in Abilene, Texas.

Right up front you have to know that this $400 lens is not going to be anybody's first choice for architectural photography. It's got a lot of geometric distortion. Really....a lot. There are several shareware profiles out on the web that will go a long way toward correcting the distortion in Lightroom but I didn't really care about the distortion for the shots I was working on the last two days and in video the 16:9 crop takes away the worst of the distortion which occurs mostly along the edges of the full frame.

What the lens does have is very, very high sharpness in the middle of the frame, and, at f8, excellent sharpness over the entire frame. A bonus of the super wide angle of view is really deep depth of field. I found that I could get sharp focus at 10 feet and use a quick hyper focal calculation to essentially make the lens a "focus free" optic. By that I mean that if you focus correctly and set the aperture to f8 you'll have enough depth of field for just about anything you can think of.

I used the lens a lot yesterday to do full body shots and group shots close to the camera and leaned on the lenses ability to do dramatic wide skies in the background to add interest to the shots. It was a technique that worked really well.  I anticipate that most of my use with this lens will call from cropping down to a focal length of around 21mm since that seems more comfortable to my eyes.

The lens is very well built and fun to handle. Even though the front element is huge it's fairly well protected by the built in lens shade and there's a decent lens cap as well. The lens balances well on the a99 but may be too front heavy for a smaller camera. I'm not sure I'd be comfortable using it with an adapter on a smaller system like the Panasonic m4:3 cameras. But as a specialty optic is sure delivers what I wanted: Lots of information in the frame and a very dynamic way of rendering subjects in space.

My recommendation?  I'd buy it again.

That brings me to the primary system I used in Abilene, the Panasonic GH3.  I wanted to travel lighter this year. Last year I brought along a couple of Sony a77 cameras and a bag full of fast Sony lenses. I also brought along too many lights and too many accessories. This year I wanted to pack smaller and shoot smarter. And let me emphasize that by not being a "lens snob" I was able to largely accomplish those goals.

I packed a couple of GH3 bodies, two kittish lenses (the new 14-42 and the 45-150mm) the PanaLeica 25mm 1.4 and several manual focus half frame lenses (which I wound up not using), and a couple of manual, battery powered flashes. A much, much lighter assemblage of gear! And I had no trepidation about its ability to perform after having shot nearly 2,000 images with the same system under available light conditions last Saturday.

Here's what I liked about using the GH3 all day long yesterday: It's lightweight but it doesn't feel under built. It's rock solid, only lighter rock solid. The EVF is great and is also adjustable for luminance which means you can match it more exactly to match the image on the rear screen. The lenses focus quickly and surely. The flippy screen is great when using the camera low on a tripod and with an external loupe.

I've had the cameras for a very short time but the menus have already become second nature to me. I liked being able to move the AF point anywhere on the rear screen. You can also use your finger on the touch screen to set the AF point while looking in the EVF. Nice.  I got a lot of use out of the standard kit lens and it was more than adequate. Quite sharp in the middle and good on the edges, even near wide open! The longer zoom is optically very good and, at f8, sharp beyond my needs.
But my go to lens was the 25mm 1.4 which I tended to use at f3.5 or f4 for single subject shots. It's a really good lens which I reviewed about a year and a half ago. Nothing has changed my initial high regards.

I owned the previous camera from Panasonic, the GH2 but the GH3 seems like a completely reworked camera that's been upgraded, modernized and made more highly functional. They paid close attention to making buttons the right size, getting the auto switching between the EVF and the rear LCD just right and lots of other small details. One of my favorite things about the new camera is the battery life. The camera uses a much bigger, higher capacity battery (which may account for the increased size of the camera overall) that's about the size of the battery in my Sony a99.  I was able to shoot a bit more than 16 gigabytes of RAW-Jpeg information yesterday and still have the 2/3rd full indicator left on my original battery. For a mirror less camera that is nothing short of amazing. If I'm shooting more or less continuously and not chimping all the time I can get an enormous number of Jpegs. Last Saturday I shot well over 1,000 files with each of my two GH3s and never changed a battery. Nice.

There's one feature I did not even know the camera had and that's the auto switch in the hot shoe that senses when a flash is attached and turned on and sets the view screens to give one a bright finder image regardless of the camera settings. It's what you get when  you use a Sony a99 and switch "Setting Effect" to off. If you use an EVF or Live View camera you know that when you attach a flash you generally need to switch to a different viewing mode to get a scene bright enough to focus and compose in when you are in a dark environment. It's nice that his camera will do it for you.

Take off the flash, or just turn it off and the camera reverts to your previous viewing setting.

I originally bought the two GH3s for my video projects but they've grown on me as still cameras. I didn't find any situations (other than the lack of a super wide lens...) that made me want to grab another camera at any time during the whole shooting assignment. I did use the a99 sparingly but only as a partner with the new 14mm lens.

Here's my current shortlist of "cons" for the GH3:

Edit: I'm removing my paragraph about Formula One in Austin. While I am vigorously opposed to the government subsidies larded out for this event I've come to realize that some people like it. I don't but then I don't really like most mass gatherings so I've decided to remove my judgmental comments and the e-mails they engendered and we'll hew to the topic of imaging instead.

Posted by Kirk, Photographer/Writer at 12:34 10 comments: