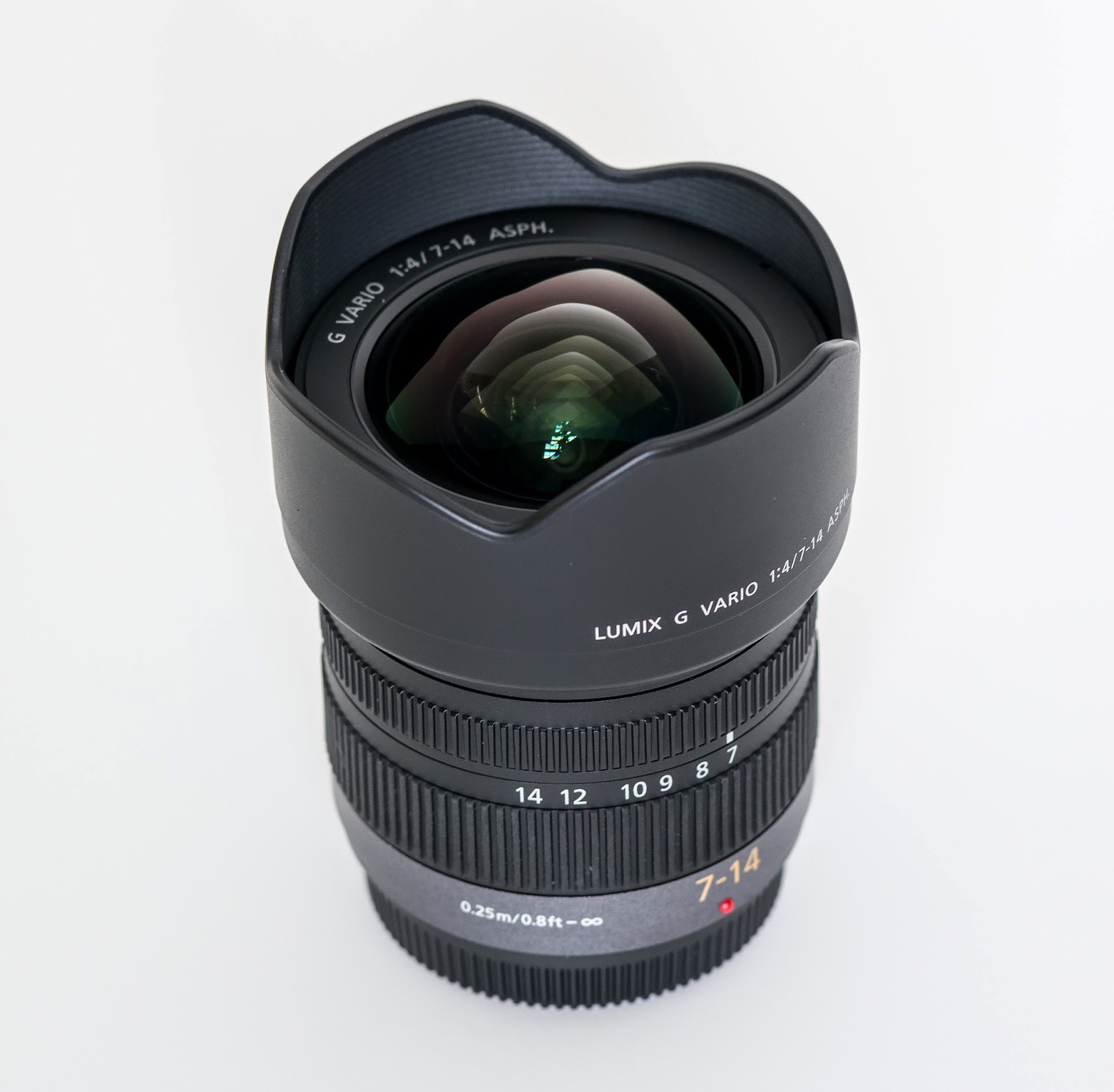 Stuff comes and stuff goes. A Sony a850 sacrificed itself to I could bring this lens home. I've wanted a copy of my own since I first borrowed this lens from a friend. Nasty thing about even the best friends is that they expect to eventually get their stuff back from you....

What's not to like? The Panasonic 7-14mm is small and light and sharp. It's a 14-28mm equivalent if mapped in full frame angles of view but it's much smaller than the Nikon 14-28mm, almost by a factor of four times.

It doesn't have anything fancy tacked on. No I.S. and no knobs. The hood is part of the structure. The front element protrudes and disallows filter use.

Optically, I can state that the lens is sharp just about every where in its range of focal lengths and from wide open to at least f8. Probably thanks to good design which includes two aspherical elements and 4 ED elements.

This rounds out my optical system for the GH series cameras. These (the 7-14mm, the 12-35mm and the 35-100mm) lenses are the lenses I had in mind from the beginning when I started re-exploring the system in anticipation of the GH4 arriving. The whole system with two camera bodies fits into one, smallish Pelican case. Very cool.

If you own this lens I'd be interested in any comments relating to your use of it and the results. Thanks!


Posted by Kirk Tuck, Photographer/Writer at 16:36

I bought this lens two years ago, expecting it to be the mainstay of the digital capture work I planned to do on my Giant American Drive-in Theater Road Trip®. I wasn't disappointed. I probably did 90% of the digital capture theater coverage with it, on Lumix G3 bodies. The premier venues were done on 8x10 and 7x17-inch b&w film, but then I backed them up with capture, and all the theaters I reached got documented with capture, mainly with this lens. Sometimes, like when there were a lot of No Trespassing signs and I'd been unable to establish contact, I slipped in with just a G3 and this lens to shoot hand-held and then move on.

That softball-shaped front element is flare-prone, but if you are working on tripod you can use a hat as a lens shade, review the results, and cut very close to backlight. As long as you don't get actual sunstrike on the front glass, you can get away with extreme backlight: the internal coatings must be very well engineered. It's better than the Lumix 14mm at 14, it's better than the Olympus 12mm at 12—overall, an extraordinary performer. I still prefer to work with prime lenses rather than zoom/varifocal, but as a special tool for the project at hand I couldn't be more pleased with it. Still carry it everywhere in a small bag with the GX7 and 14/20/45.

I've had this little gem for a while and am throughly pleased with it. It seems to have no faults, takes up little space and is not painful to carry in the bag. Results so far have been flawless, and even better than my Canon 14L v2! At less than half the price no less. It exhibits a great clarity, seemingly transparent, and extremely versatile. Nice.

The other lens I suggest is the 100-300, with a tripod mount from Mr. Roesch in Germany. It's usually maligned on the inter web, but I believe by people who have no clue how to properly hold a long lens. It's quite sharp and contrasty at all focal lengths, and opens up a whole new range of possibilities.

One of my favorite M43 lenses!

If you're using it for video, DFocus just announced a useful looking filter adapter for the 7-14. ND filters will only work at 10-14mm without vignetting, but that's still fairly wide and better than the alternative of changing the shutter to control exposure...

I have the Panasonic 7-14mm also and love it. As you said, it's sharp throughout the range. There's some chromatic aberration in the corners but that's easily corrected in Lightroom. Interestingly the E-M1 seems to be automatically compensating for chromatic aberration when paired with this lens.

I rented this lens recently to bring on vacation instead of my Nikon 14–24. Couldn't have been happier with the results, and the lack of neck pain from hauling it up and down hills. https://www.flickr.com/photos/perardi/sets/72157642587674393/

Those of us who have been shooting professionally with nothing but m43 for the last couple years have had time to own multiple copies of this little gem :) OK, no, I'm not proud of it - the issue is that I went the Olympus route when the E-M5 came out (having been underwhelmed by the feel of the then-current GH2), and the 7-14 tends to display large purple blobs of color in certain situations on Oly bodies (due to a weaker UV filter on the sensor, apparently).

I eventually decided to sell my original 7-14 rather than try to work around the issue - any strong backlighting would bring it out. I tried a few different options for my wide angle needs, none of which really did the job, so early last year I broke down and bought another 7-14 and a G5 just to mount it on. That worked fine for a bit, but much like the GH2, I never really fell in love (or even like) with the G5, so I eventually broke down and did the swap of the filter holder from the Panasonic fisheye to the 7-14 (as detailed by Anders on DPR) which, combined with a Wratten 2A filter, pretty much cures the issue on Olympus bodies.

In the end, I have no regrets, especially with the built-in HDR modes on the E-M1 and E-M10 that I currently shoot with. Handholding down to 1/5sec (or slower, if I'm careful) with usable 4-frame bursts, automatically combined into a decent JPEG in-camera, is pretty much priceless for anything that needs a really wide FOV in difficult light.

The 7-14 is the only Panasonic lens (and only zoom) I've kept in my daily shooting bag, and I often do entire shoots with the 7-14 on one body and the Olympus 17 1.8 (or 25 1.8) on the other. The Olympus 7-14 2.8 that is coming next year probably won't displace it, as I don't really need the speed at these focal lengths, especially given the cost and size penalties.

this is really awesome

I have used it for a number of years on Oly bodies. Great for indoor shots in European cathedrals. Oly has less of a UV filter on the sensor and it can be subject to purple fringing. There is a well documented solution to this by using a Wratten 2A back filter.

The lens stays in my bag when I trave and gets considerable use.

I would be interested to find how you think this compares to the Olympus 9-18mm which offers a similar aperture but is much smaller, and I have found to be a sharp and well-adjusted lens.
Andrew

Compared to the 14-24, this one's small, light, compact and doesn't flare when the sun is within 180 degrees of the front element.

When the Panasonic GX7 came out, this was the lens that made the m43 system work for me. The GX7 allows me to go small, silent and stealth and still shoot like my full-frame cameras.

I use the 7-14 when shooting in churches and when I want to go light, it works great in the field for landscape work. SInce it's so small and light, it's great when you've got to hoof it. Depth of field is another bonus while working landscapes.

Wide open, it's sharp. Stopped-down and working into the sun gets you a nice star. Flare and ghosting isn't all that bad.

I've paired this with a 14-140 and figure that with two lenses and an iPad with cables, cards and batteries, I've got a total system that's about 20% the size/weight as I would with the full-frame.

Andrew Johnston - the Olympus 9-18 isn't constant-aperture, isn't quite as sharp (particularly in the corners), and, most critically for me, isn't built as well. Its collapsible nature makes it more susceptible to damage from relatively minor bumps, which I found out first-hand on a job a couple summers ago; lenses don't work very well when the inner lens tube is pointed up about 15-20 degrees.

The Olympus is a decent lens, and it definitely needs less room in a bag than the Panasonic (and costs a fair bit less). Still, I just can't bring myself to use it on paying jobs any more after the experience I had - YMMV, of course.

I have rented both the Olympus 9-18 and the Panasonic 7-14. The Panasonic is definitely the better of the two.