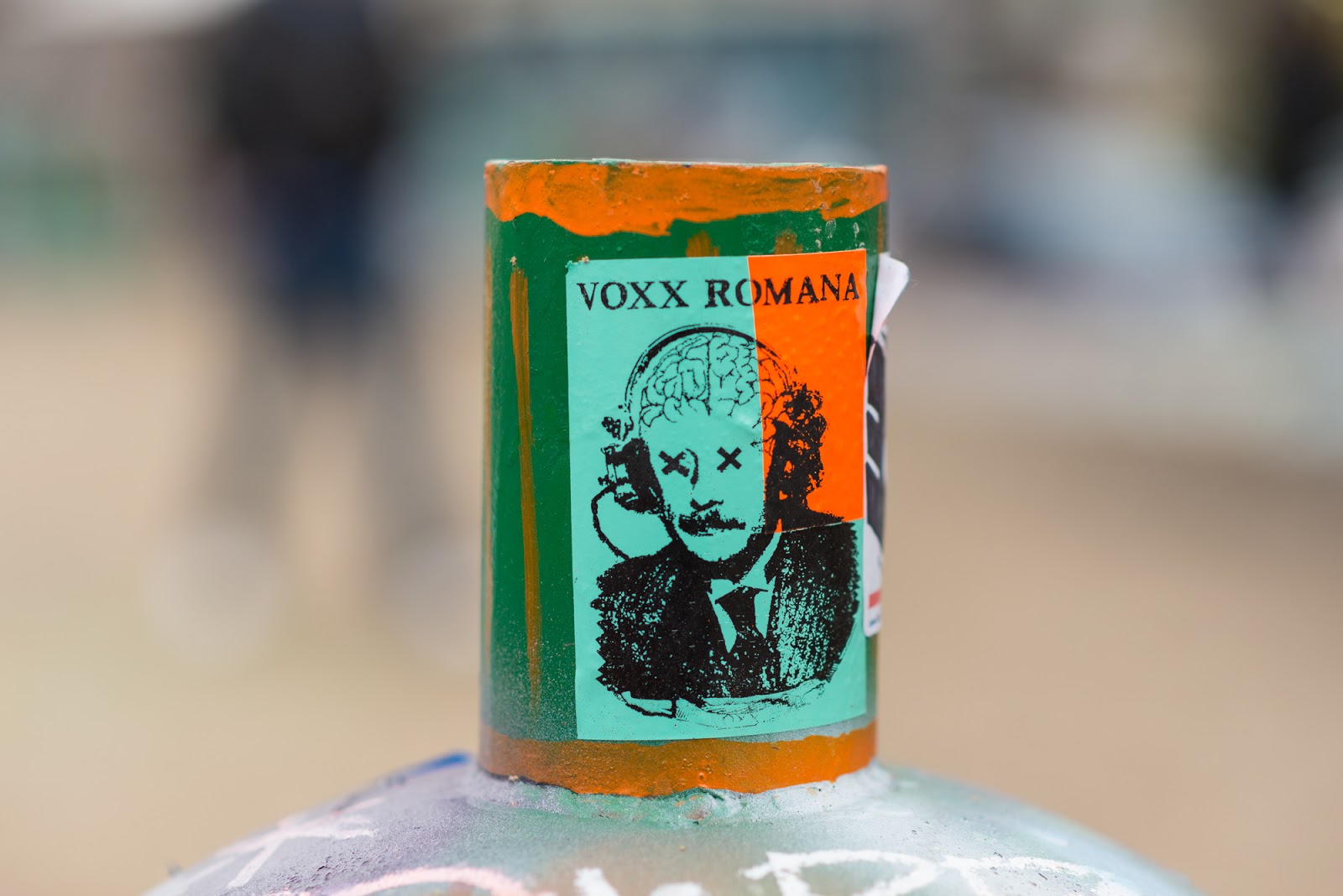 I like the Graffiti Park in downtown Austin. Today I finished up lots of stuff in the studio. I went to the noon swim practice. It was unsettling to exit the pool in 40 degree weather with a chill wind blowing and walk, soaking wet, to the locker rooms. I ate a wonderful left over lentil and ham soup. I had a square of dark chocolate with almonds and sea salt as a dessert. At 3pm I got in the car and drove over to my favorite parking place, near Treaty Oak, and walked over to the big walls.

I didn't have any sort of mission in mind I just wanted to get out of the house and out of the studio. A true workaholic can only take so much holiday cheer before one's thoughts turn to taxes and marketing....

I took along the newest camera and one of the newer lenses to arrive in the studio. It was the Nikon D610 and the 85mm G f1.8 lens. I wanted to play around with depth of field and see what the real difference is in every day shooting between the larger format and the smaller formats. I also wanted to see how the 85mm lens looked when shot wide open. DXO rates it as the second best medium telephoto portrait lens in the entire Nikon Pantheon. I wanted to see what that looked like, not how it read.

It was much colder than I thought it would be and on the five minute walk to the wall the wind cut through the zipper on my hoody like a squirt gun filled with ice water in the hands of a crazed account executive. I stopped by the Goodwill store on Lamar Blvd. to see if they had any hats. They didn't. I pulled up the hood, stuck my gloved hands in my pockets and trudged on.

The park was hopping today. It's become a stop on the out of town family tour of Austin. It was also "selfie central." 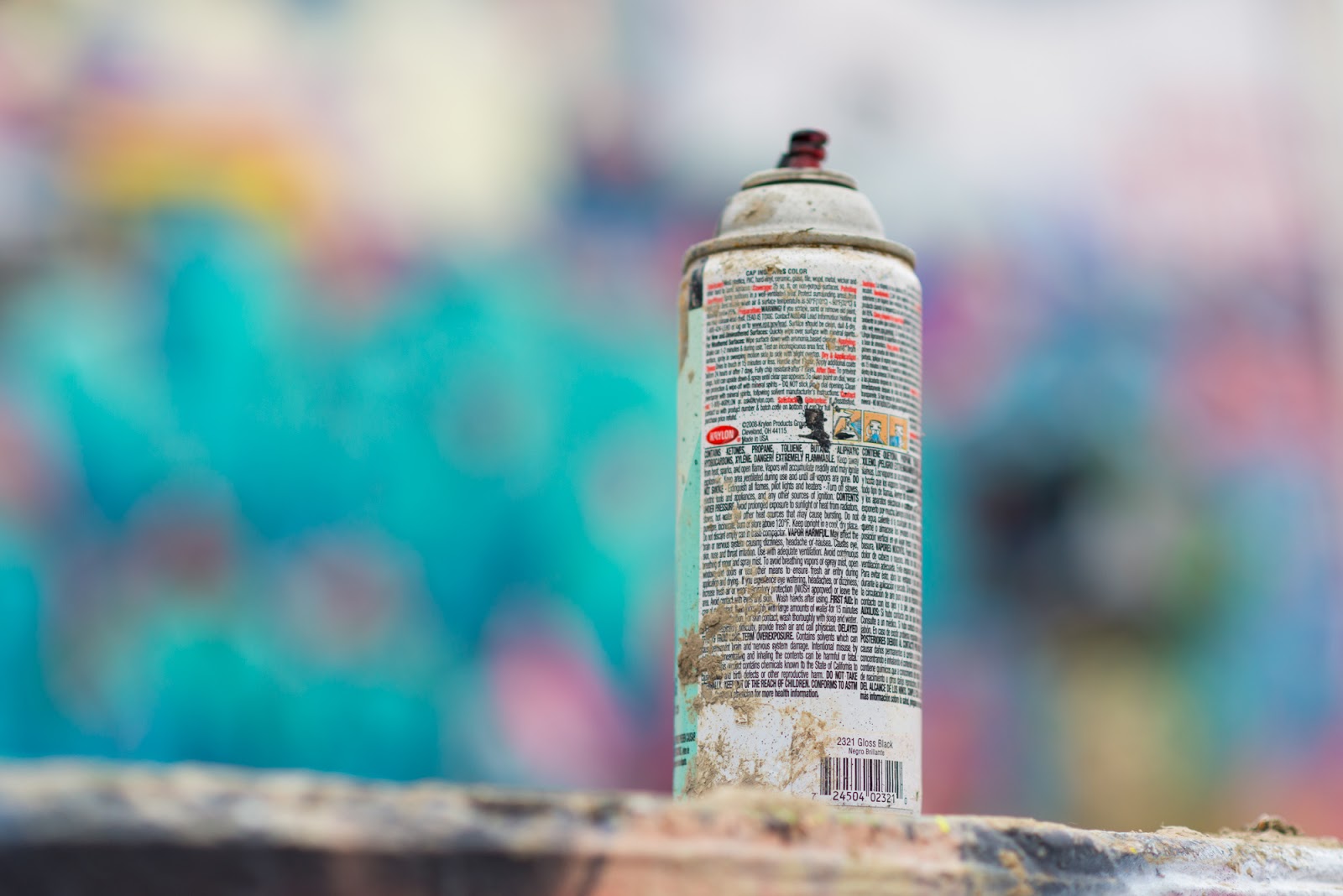 I think the focus in right on the money with this camera and lens combination. 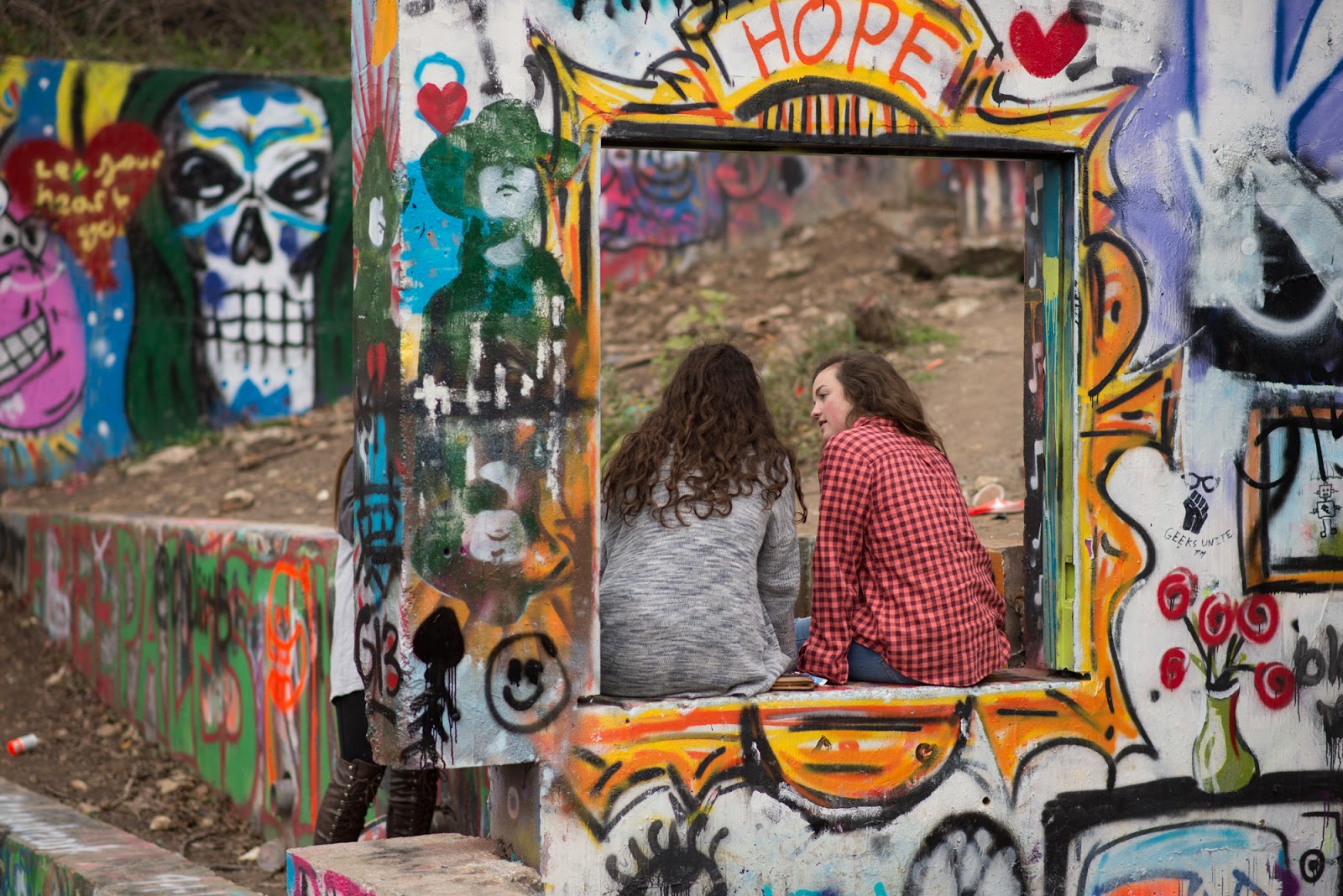 BFFs taking a moment between making selfies to compare notes. 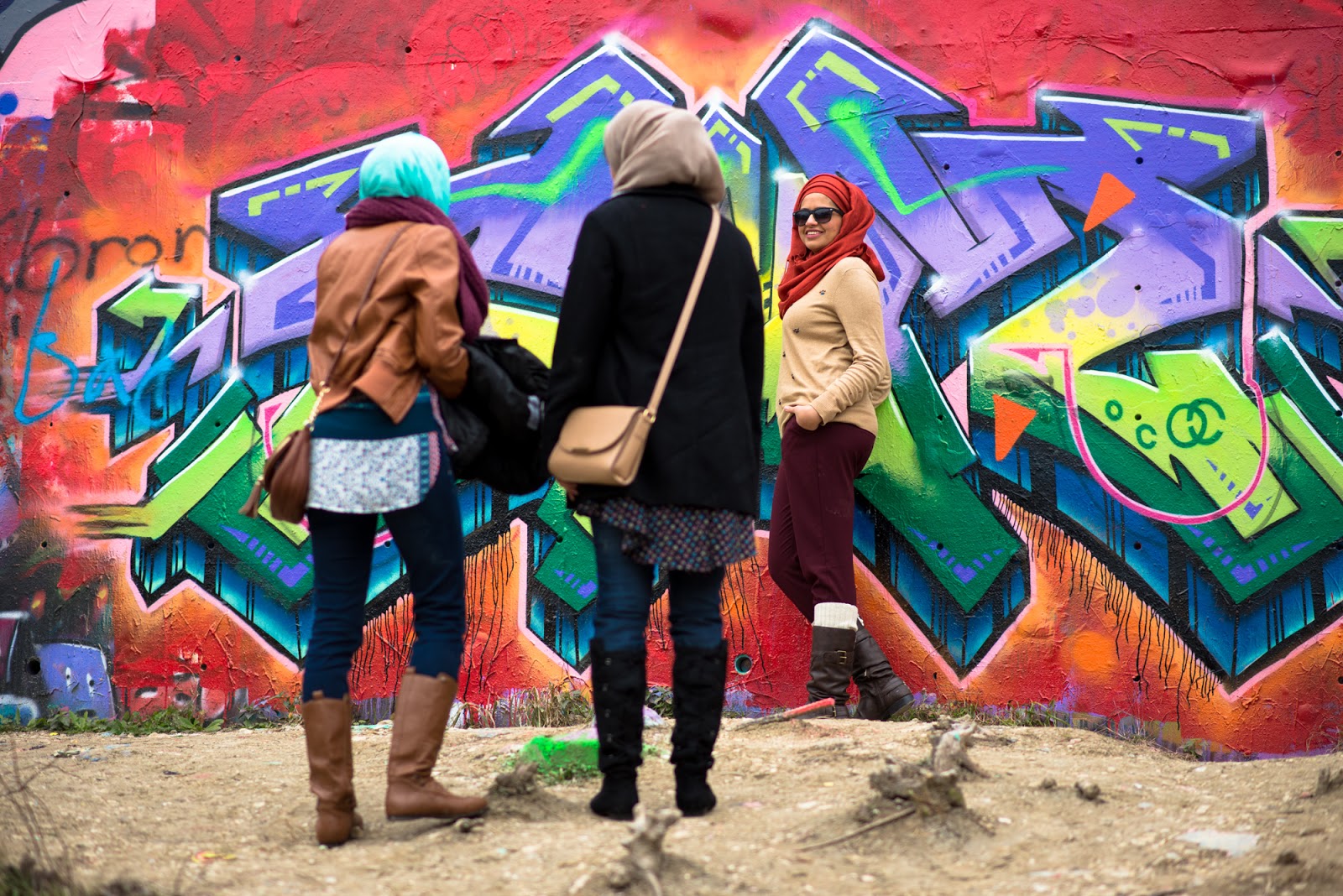 The Graffiti is international. 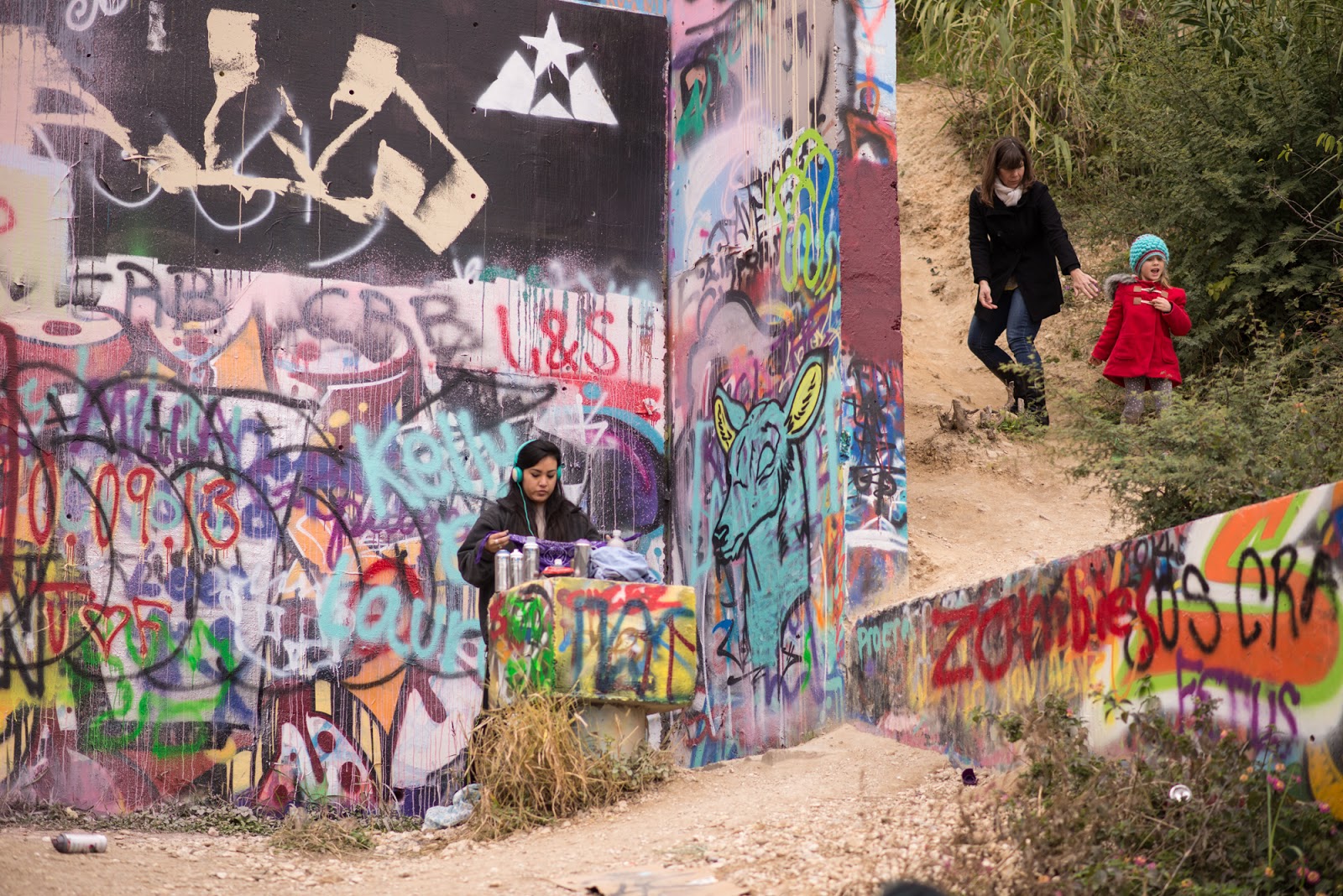 Children on adventures, mothers in distress and artist shutting it all out. 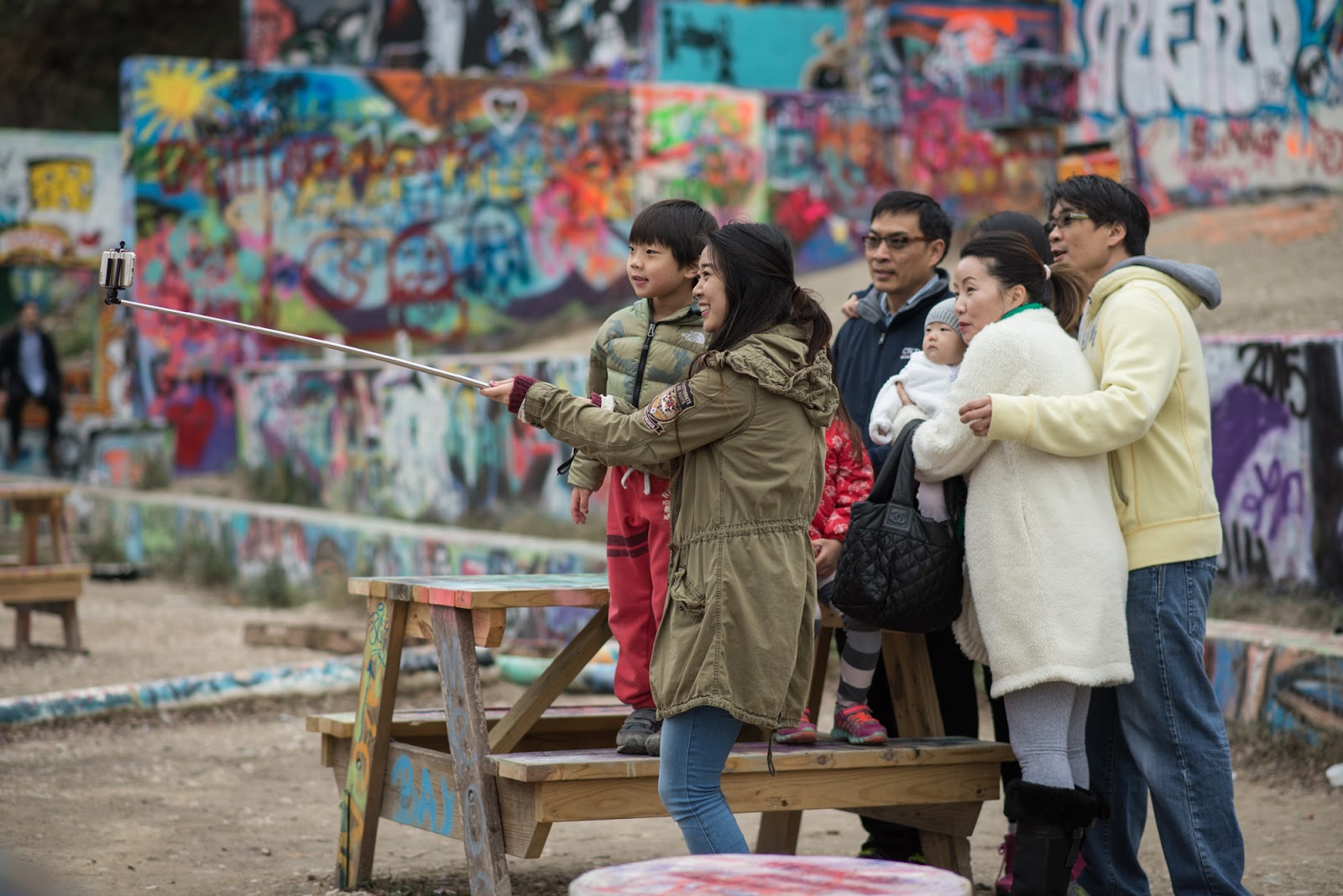 This family brought a special stick with which to position their designated cellphone/camera
far enough in front of the group to do an extended, multi-generational selfie. 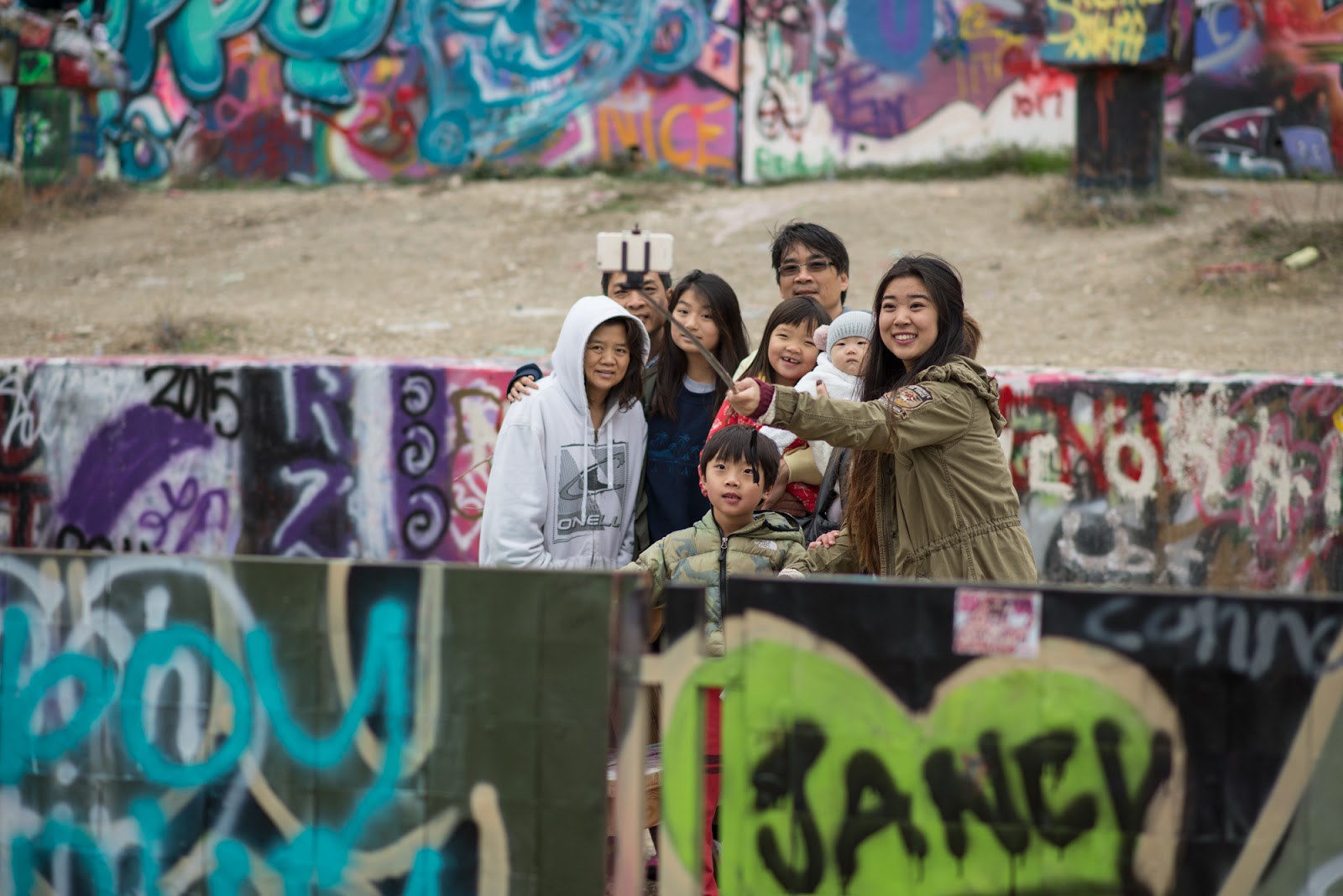 From this angle it appears that the family is worshipping the little white box. Or they are
all fascinated to find that "The Grinch that Stole Christmas" was playing just then
and they had all promised each other that it was a very important movie
that they would all catch together during the holidays. 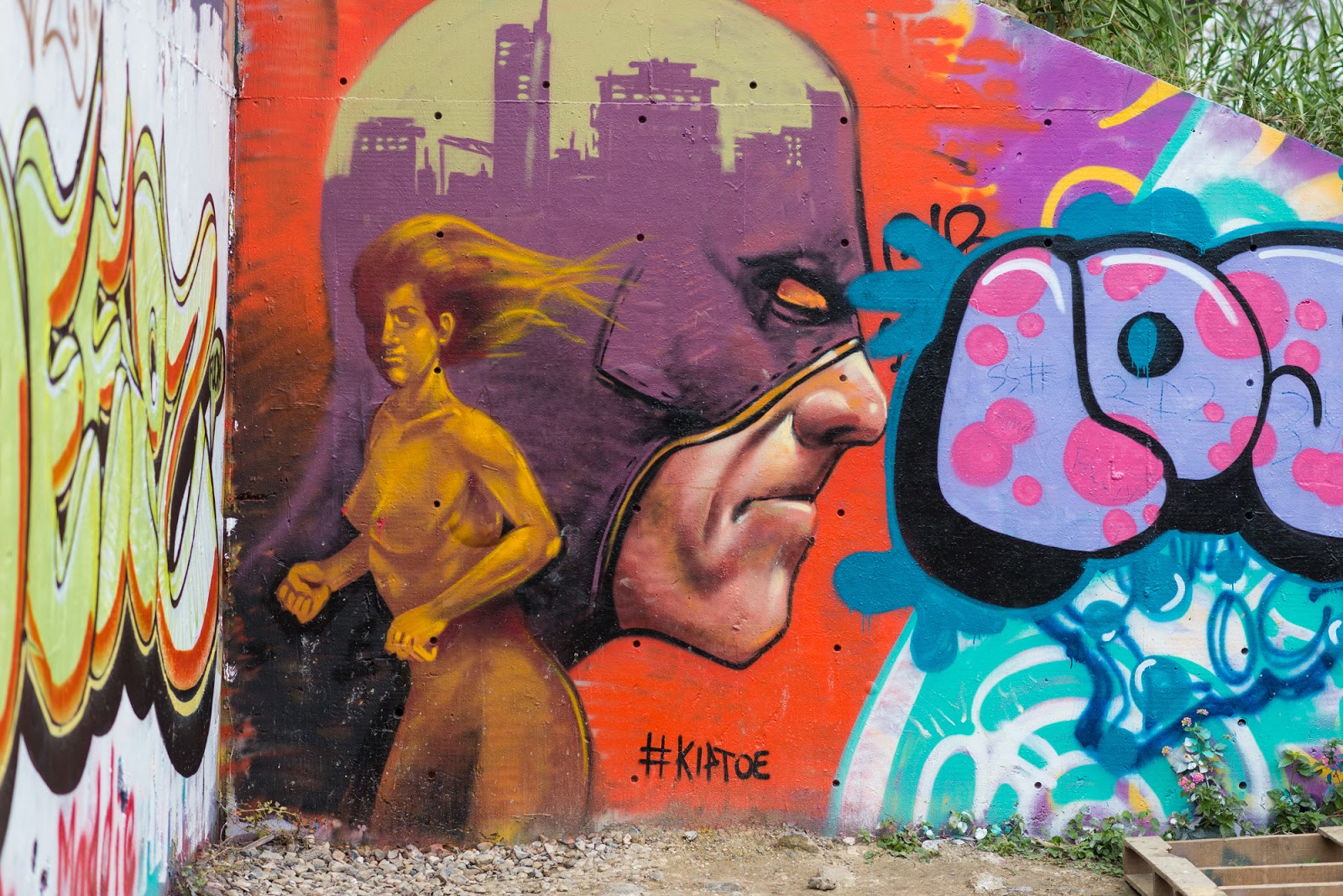 I thought the glowing red nipples made this one a PG-13 mural.
You know, for suggestive content.... 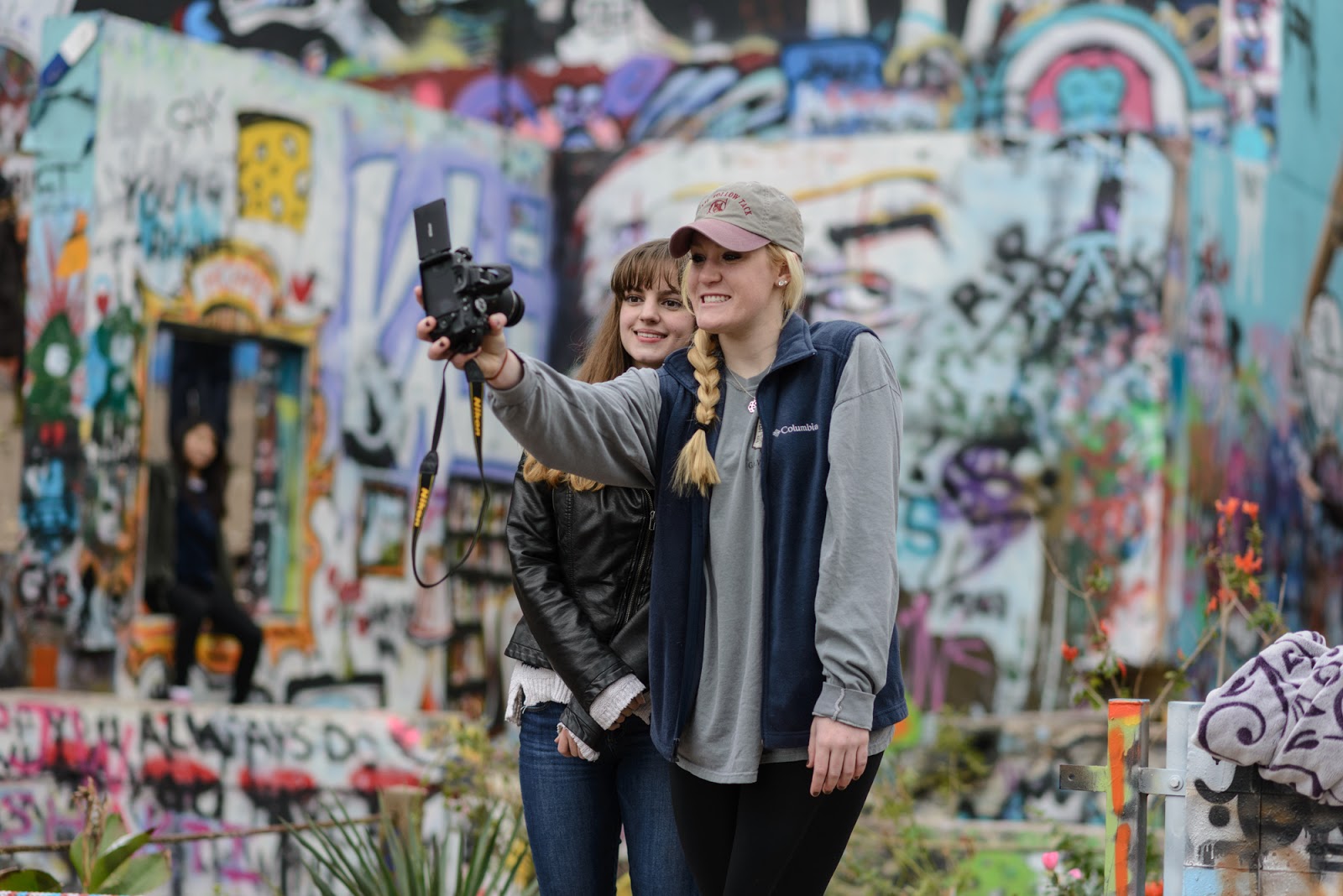 But at the other end of the walls we have the G rated section,
home of endless selfies. 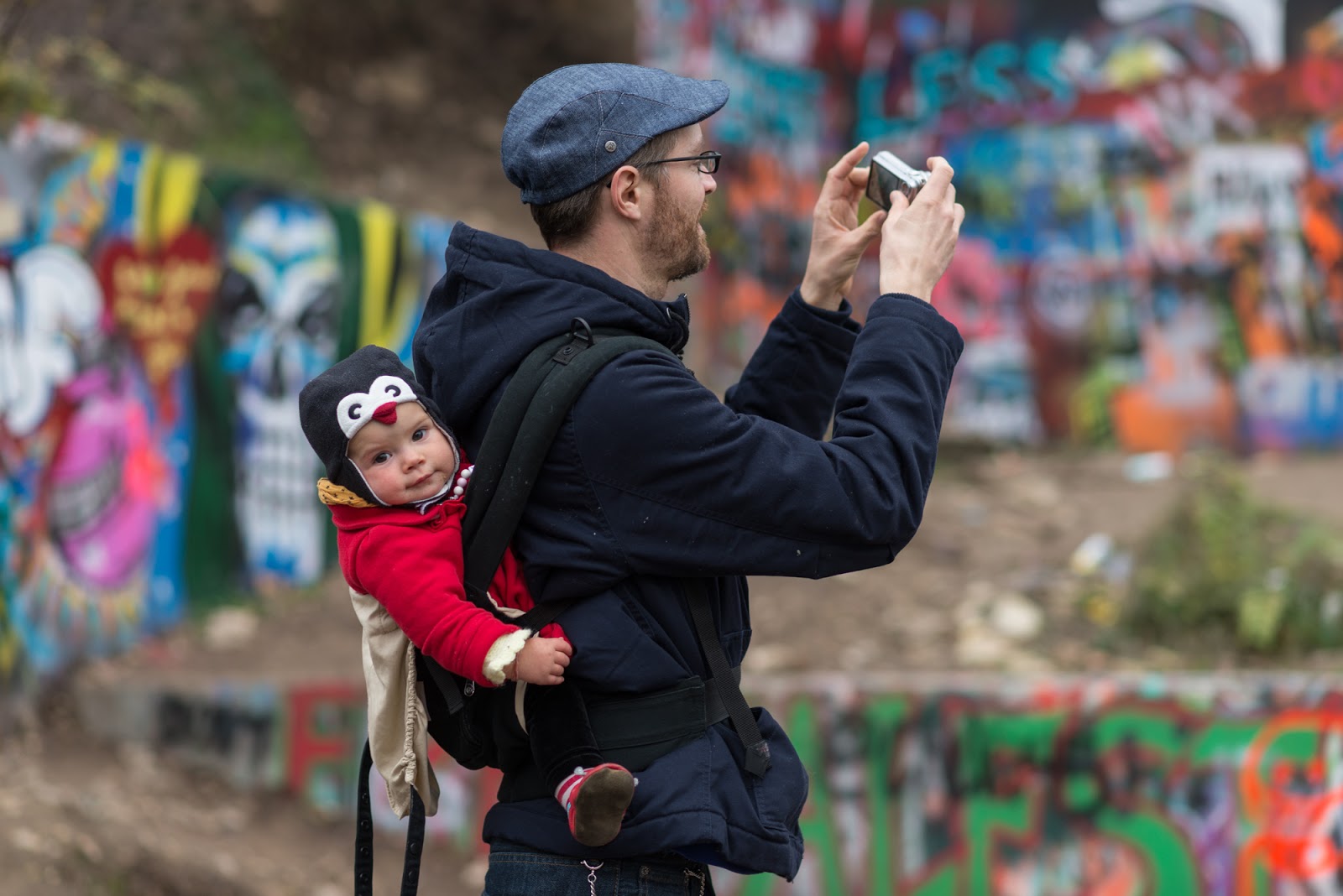 Graffiti Tourism is so right now. I'm glad I was there to document it. 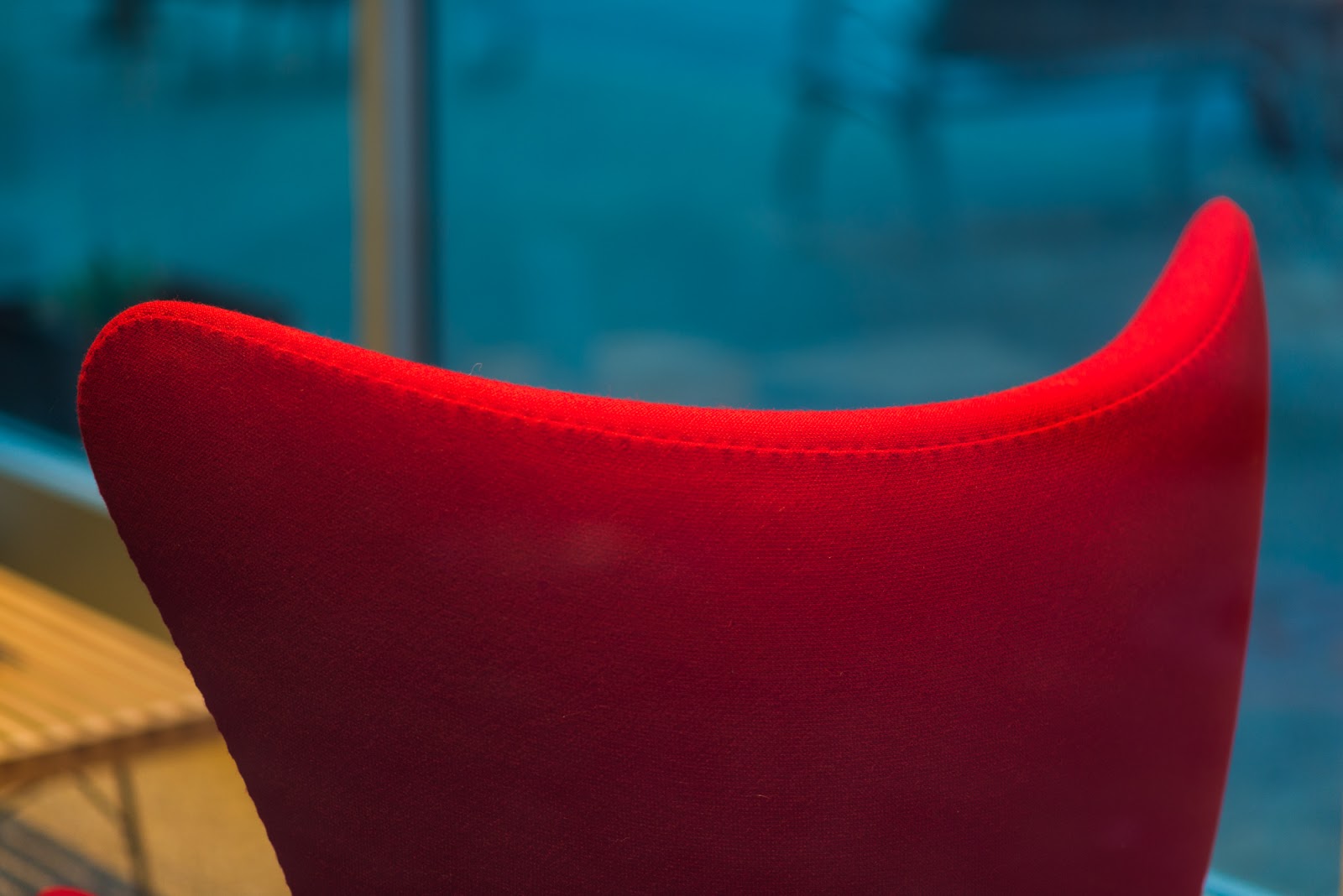 A few walks through the graffiti du jour and I was ready to head downtown to Caffe Medici to meet a friend and have a redemptive cup of milky coffee. On the way there I say this red chair in a shop on second street. They always have very cool chairs and lighting fixtures but they are very pricey. I thought it would be fun to see how the lens and camera would handle the mixed light and the narrow depth of field from using the lens at f2.8. 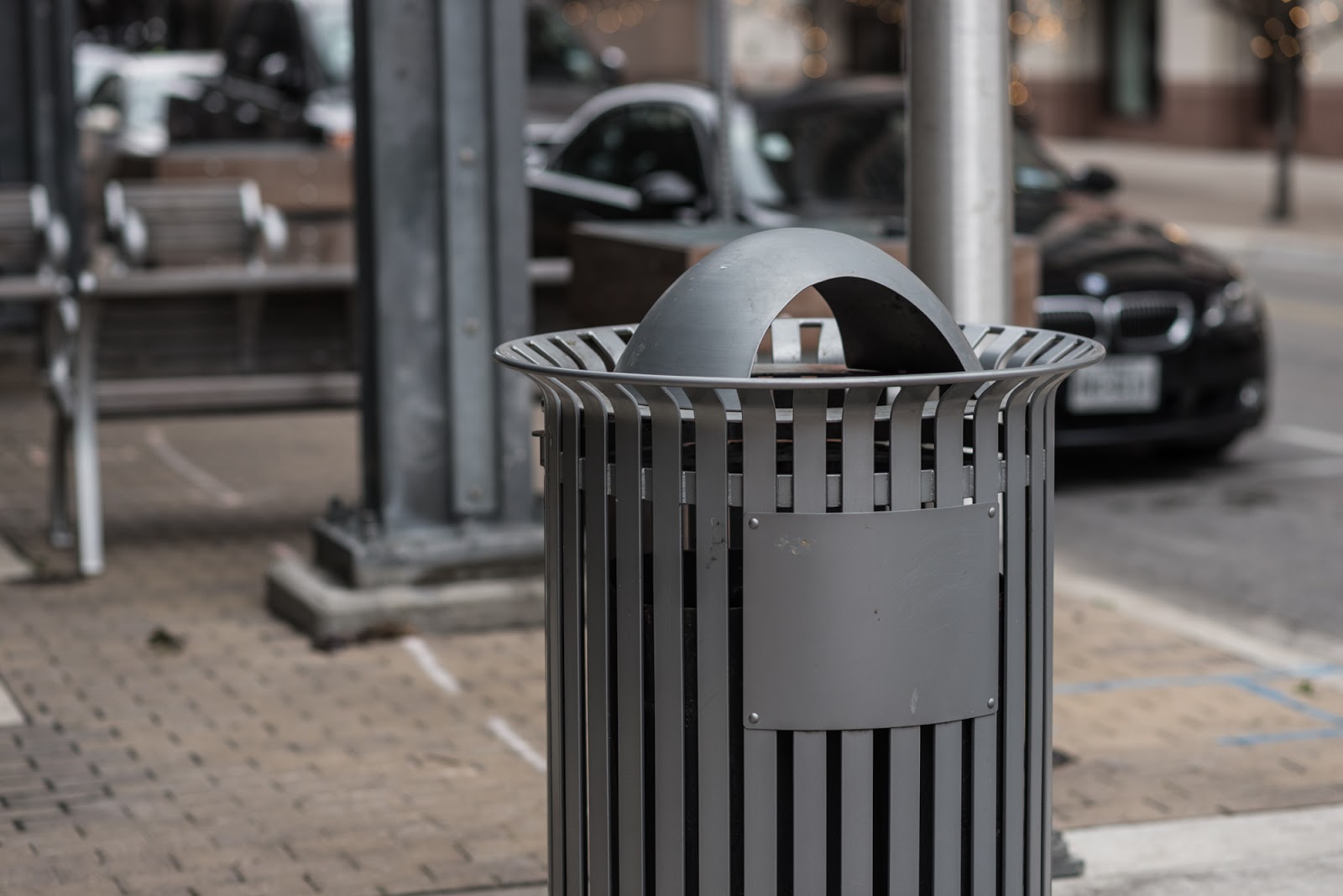 In the end I learned a few things. I learned that I should bring along a hat when I get out of the car and am already cold five steps away from it. I learned that 85mm lenses can be fun and that this one is sharp and nails focus. I learned that the Graffiti Park gets old when the work is chaotic and you haven't brought along your own model. I guess that means the trend is winding down. I learned that Medici makes a very nice Latté and that the woman behind the counter making my coffee is still very beautiful. I still have her contact information in my wallet. I guess I should follow through on my suggestion that we get together for a portrait shoot. There's always next year. It's right around the corner.

The main thing I found out is that I like the sound of the D610 shutter. It's subdued. It's not like the gun shot shutter of the D700 which is one of the reasons I fled the Nikon system five years ago or so. I'm happier with this one.

On a final note of the year (maybe) I am reminding my daily VSL readers that the sale price on the novel of the year, "The Lisbon Portfolio" Kindle version goes back up from $3.99 to $9.99 on the first of the year. You have about eighteen hours to purchase your copy at the lower price. You'd better hurry and get an electronic copy before they run out...... 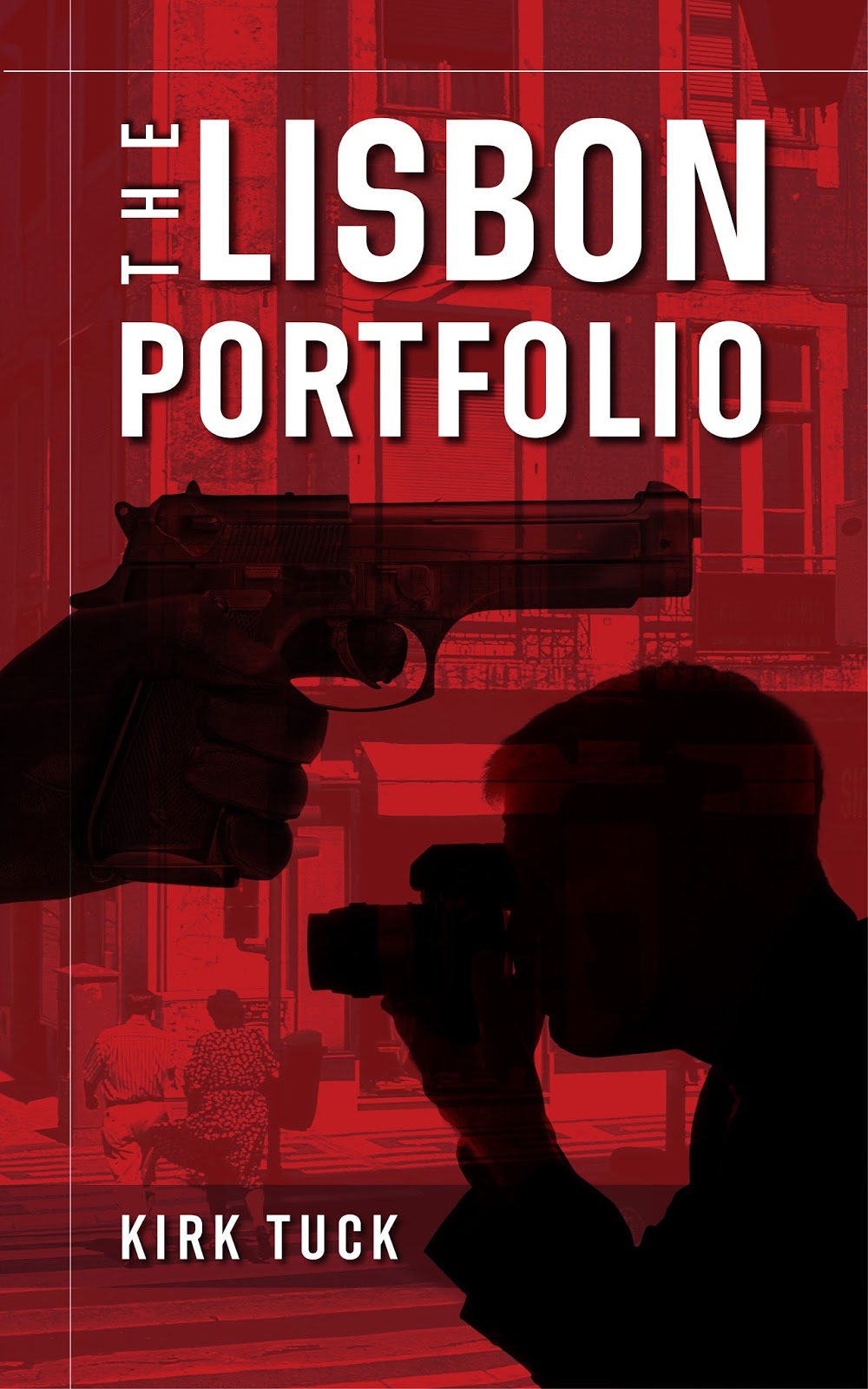 Posted by Kirk Tuck, Photographer/Writer at 21:56

This isn't a comment on the graffiti park article, but I wanted to get back to you with my question after your inadvertent cell phone "delete." I would like to understand your affection for EVFs. I am somewhat older than you, but I gather you are not a digital native either. I grew up with Nikon film cameras and now use Nikon DSLRs. Whenever I have played with mirrorless cameras--some are tempting--I find the view through the EVF to look weird and artificial. It is interesting that a professional photographer of your caliber prefers them. Would you be so kind as to explain why? Thanks.

From what I read in this post and others I guess that Caffè medici must be a special place! Wish you an Happy and Interesting New Year :-)
robert

Hmmmm. An 85mm for a walkabout lens. Interesting idea and nice results. Thanks for sharing your images and thouhts. Stay warm, and Happy New Year to you and yours.

For me EVF's provide immediate feed back on exposure, DOF etc eliminating needless chimmping on the LCD after taking the shot. The viewfinder on a camera has no bearing on the caliber of a photographer.

Gary, The EVF is a much, much more professional tool than the old OVF finders. You get to see exactly what the camera will overlay in the final exposure; including the color temperature interpretations, filter effects, exposures and so much more. The optical finder is pretty and primitive and usually has no connection to what finally hits the memory card. Time to re-align old thought patterns to new realities.

Also, I can't imagine that you and I are separated by that many years. I grew up with 4x5 cameras and old film Leicas. But I've been experimenting with EVFs since the first of the Pen cameras from Olympus. If you are seeing weird and artificial stuff through the EVF then you may be seeing what the camera is set up for or you may have the preview settings all screwed up.

I agree with everything Frank said just above. The really good EVFs are a big step forward for Pros. I don't see the market going backward every again.

Also, Gary, check out the piece I wrote for "TheOnlinePhotographer" blog site. It's an extensive article on why the EVF and why it's inevitable. Do a search on that site for Kirk Tuck.

Almost everyone starts out saying that we'll have to pry their cold, dead hands off their Pentaprism cameras but after a month of so of solid EVF use none of them every wants to return to the OVF.

Thanks, Kirk. I just started reading (and enjoying) your blog on the recommendation of a professional landscape photographer. I shoot mainly landscapes and I was wondering if your preference for EVFs was specific to your work in portraiture. Apparently not.

Next time I'm in Austin I'll buy you dinner at the Texas Chile Parlor.--Gary

Would be nice to see you put that same lens on your GH4, Kirk, and see how it comes out. Should be not too painful with focus peaking at hand.