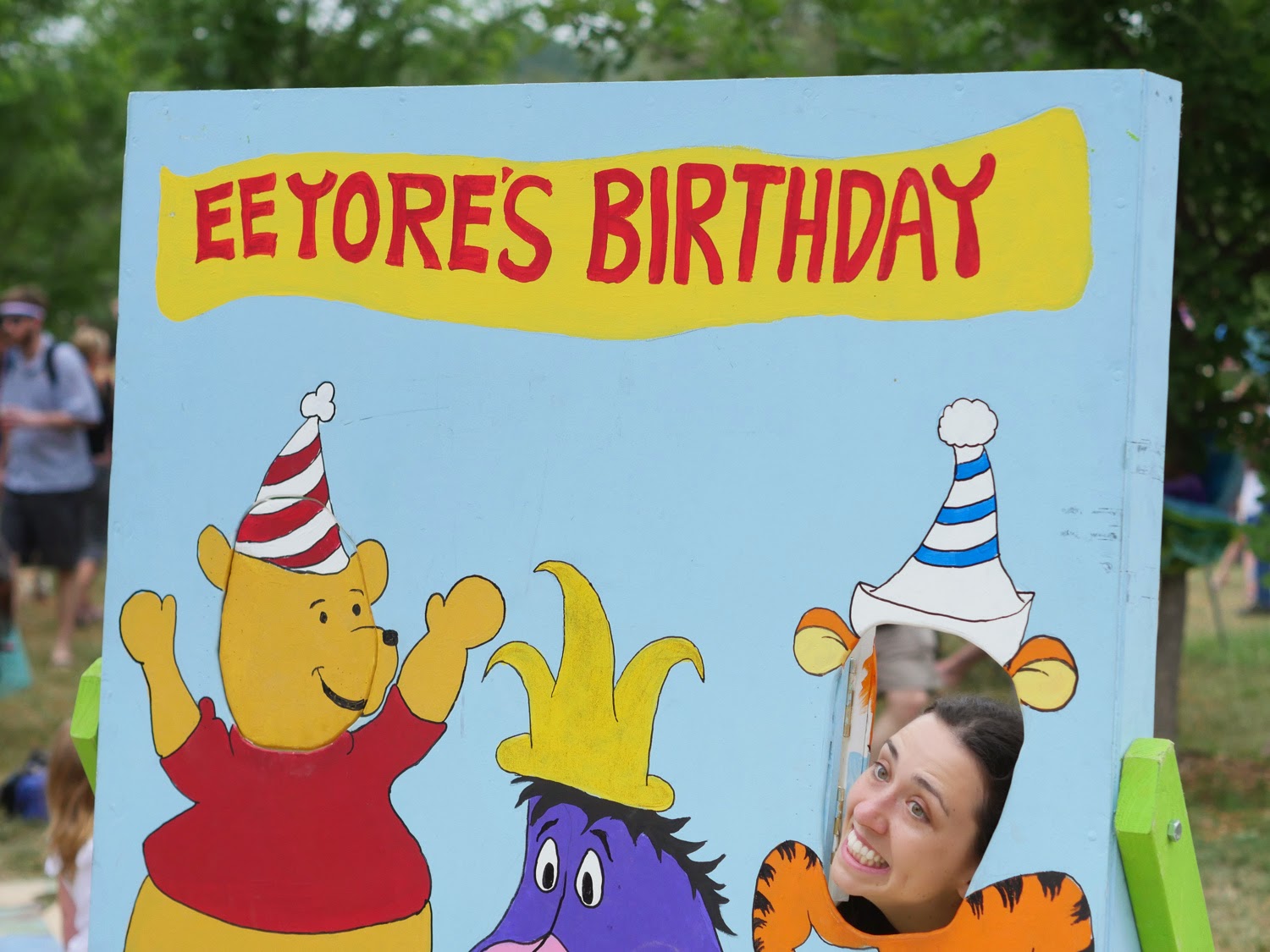 I'm sitting in the studio with the GH4 on the desk in front of me. Visually its appearance is so close to the GH3 that I can really only tell them apart by the locking mechanism in the middle of the mode setting dial. The rubber covering on the camera is also a slightly different texture.

When I look through the menus (and don't dive into the video menu) the cameras are all but interchangeable. Of course the video menu is swollen but it's still logical and easy to understand. The real difference for me between the two camera in terms of handling, etc. is the better viewfinder on the new camera. It's much, much better. When I compose images with it the resolution and tonality of the screen make it seem almost exactly like a traditional optical viewfinder. And out of the box it matches the overall color and exposure of the LCD panel on the rear of the camera.

Last night I put the 400+ page manual .pdf on my laptop and sat down to read every page. Of course I skimmed over obvious stuff like how to insert the battery and how to attach the neck strap, but I did read about every new control and menu option on the camera. With my instant book learnin' in place I headed over to Eeyore's Birthday Party this afternoon to test it all out. Just before I left the house Ben came up to me with a box from Amazon. Inside was a 45mm f1.8 Olympus lens. I reconfigured the camera. I put the 45mm on the GH4 and stuck the 25mm Leica/Pana lens in a tiny bag, along with a spare battery, a spare memory card and some cash. All of the images in this particular blog post were made with the 45mm lens. It's a nice lens. I owned one before. I needed to own it again.

It was overcast and dreary and I decided to set the ISO at 800 to give the camera a more "real world" test. Usually I start out shooting at 100 or 200 ISO and stay there until I need to move. This time I thought I'd start with a more challenging setting.

For some reason I just didn't get into the mood of the party today. Everything changes and we constantly change, and as Buckeroo Bonzai said, "Wherever you go, there you are." Maybe it was the weather, maybe it was the huge increase in what appeared to be an ex-prison population attending, maybe it was the realization that most of the slender and beautiful wood nymphs have been replaced year after year by much heavier, rounder less physically attractive people. Or it could be that I was just out of sorts today---but I called it quits after a couple hours and headed back to the house (and the newly painted, red studio door).

I haven't shot any video yet but now I have a couple hundred still frames under my belt and I've done some processing so I have a few things to talk about. I used the fine jpeg setting at the highest resolution because that's my standard approach. I didn't know whether or not Adobe added the GH4 yet to their raw converter so I was being safe by shooting the Jpegs.

In the standard profile at ISO 800 the files had two things that needed attention. First is that the files were a bit flat. The histogram fit perfectly from left to right for most scenes but the contrast needed a general tweak and I also found the need to add a bit of black to the shadow side of the image tonality. The color is neutral and not over saturated. The other parameter that I found which needed a tweak was the sharpening. Straight out of camera the images needed a small nudge in the sharpness menu to have the requisite "zing."

Both of these issue, the flat files and the need for a small bit of sharpening are not necessarily bad things. In fact, that's how many professional image makers prefer their beginning files so that they can apply changes during post processing where one has more flexibility and control in fine tuning. Easier to add contrast than to try and take it away. Easier to sharpen then to try and get rid of the effects of overly aggressive, in camera sharpening. Still, if you want to deliver images straight to a client, without the benefit of editing, you might consider nudging both the contrast slider and the sharpening slider in the profile submenus to +1. That would be a good compromise all the way around.

Before the arrival of the tiny Olympus 45mm it was my intention to use the Pana/Leica 25mm Summilux today. So this morning I was walking around the house with that lens on the camera randomly focusing on stuff. The AF in AFS was very quick and as sure-footed as a mountain goat. Everything I pointed the camera at, from piles of clothes in a dark closet to expanses of bright walls was focused as quickly as with any camera I can remember using. The 45mm 1.8 gave me pretty much the same performance.

While I justify buying the camera on the strength of its video capabilities, and I add to my justification both the higher top shutter speed and high top sync speed, the most obvious improvement is still the wonderful EVF. If you are an "eye level kind of shooter" (and I am most certainly in that camp) the camera is well worth the upgrade for that. Everything else is just candy.

The camera, with the 45mm lens, is small and light an agile. Especially compared to the Sony a850 that I've recently used over and over again. And I will say that the GH4 beats the pants off the Sony for low noise/higher ISO performance as well.

While it is only my second day (first full day) with the GH4 it's quickly becoming apparent to me that this will be my "front and center" camera for the foreseeable future. So why keep the GH3's around? On my last video project I took advantage of having multiple cameras that lived in the same color family. By that I mean the files matched well in look and feel when I cut them together in editing. It's my hope that when using all the cameras at the same codec and setting, say: 1080p, 30 fps, .Mov 50 mps. I will be able to shoot tight shots, wide shots and even reverse angle shots simultaneously, with up to three cameras. A bit more work in the actual shooting but so many more options in editing.

At this point I would usually put up a "cons" list after having discussed many "pros" of the camera but the reality is that the GH3s are so close to the same for general touch and feel issues, and even basic imaging issues, that the GH3s were like a warm-up camera for the GH4 and anything I didn't like on the GH3 I either made a workaround for or learned to ignore. With that in mind I have no gripes at all with the new camera.

There are some things I am looking forward to using on video jobs. These include: focus peaking for manual focus pulls. Two different sets of zebras; both of which can be set to different ranges for different types of alerts in exposure. I look forward to experimenting with some of the functions like the pedestal control to designate the black behavior in video. The shadow/highlight submenu which allows one to create custom curves for video images. And, finally, the addition of two cinema style profiles. If you can use a GH3 proficiently there is very little to learn in stepping up to a GH4.

As to whether this camera has improved focusing behavior in AF-C, or whether the camera will be a contender for "birds in flight" imaging, I'll leave to more detail oriented reviewers. All I know is that the camera feels pretty perfect to me. Almost as good as a Sony RX10.... :-)

Now, a few photos. Some even captioned: 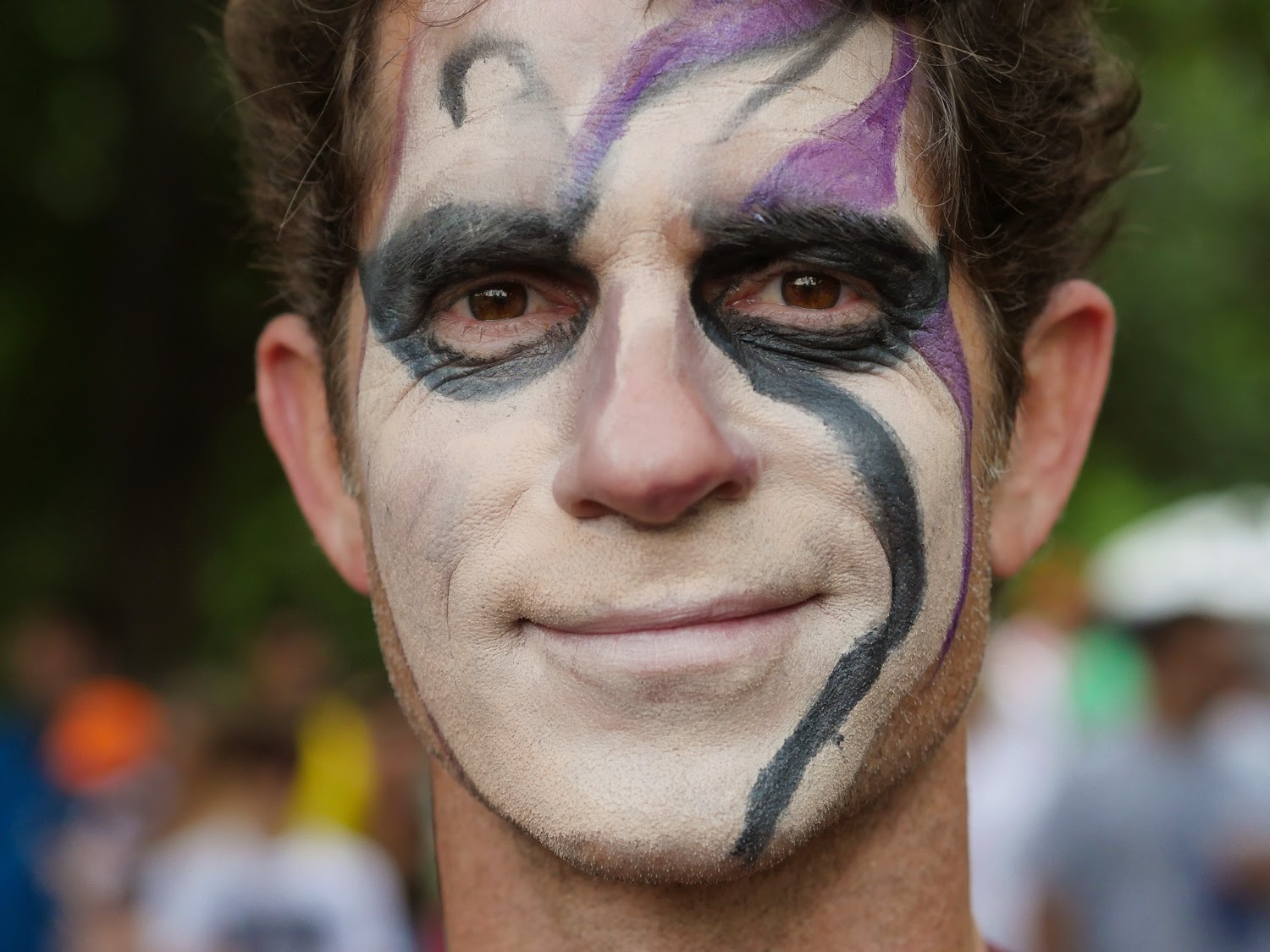 John. Photographer. He showed up, as he has for nearly a decade, with a single Leica M6
in hand. He's also made a conscious effort to be really "in" the Eeyore party spirit.
What I learn here is that the 45mm, shot at f2.8, has issues with too shallow
a depth of field. The tip of John's noise and also his ears fall out of the zone
of righteous sharpness. 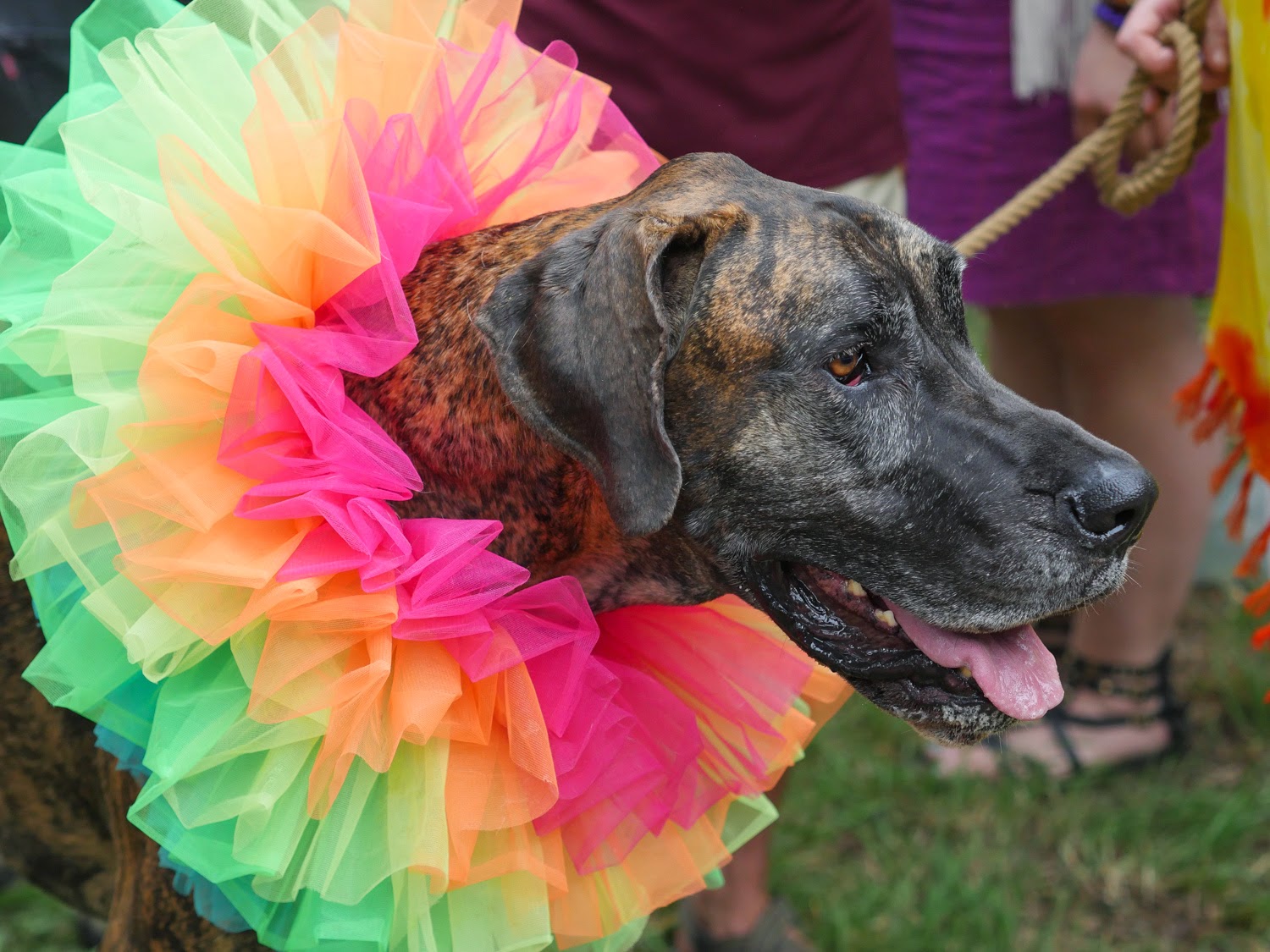 All dogs seem uncomfortable in costume. 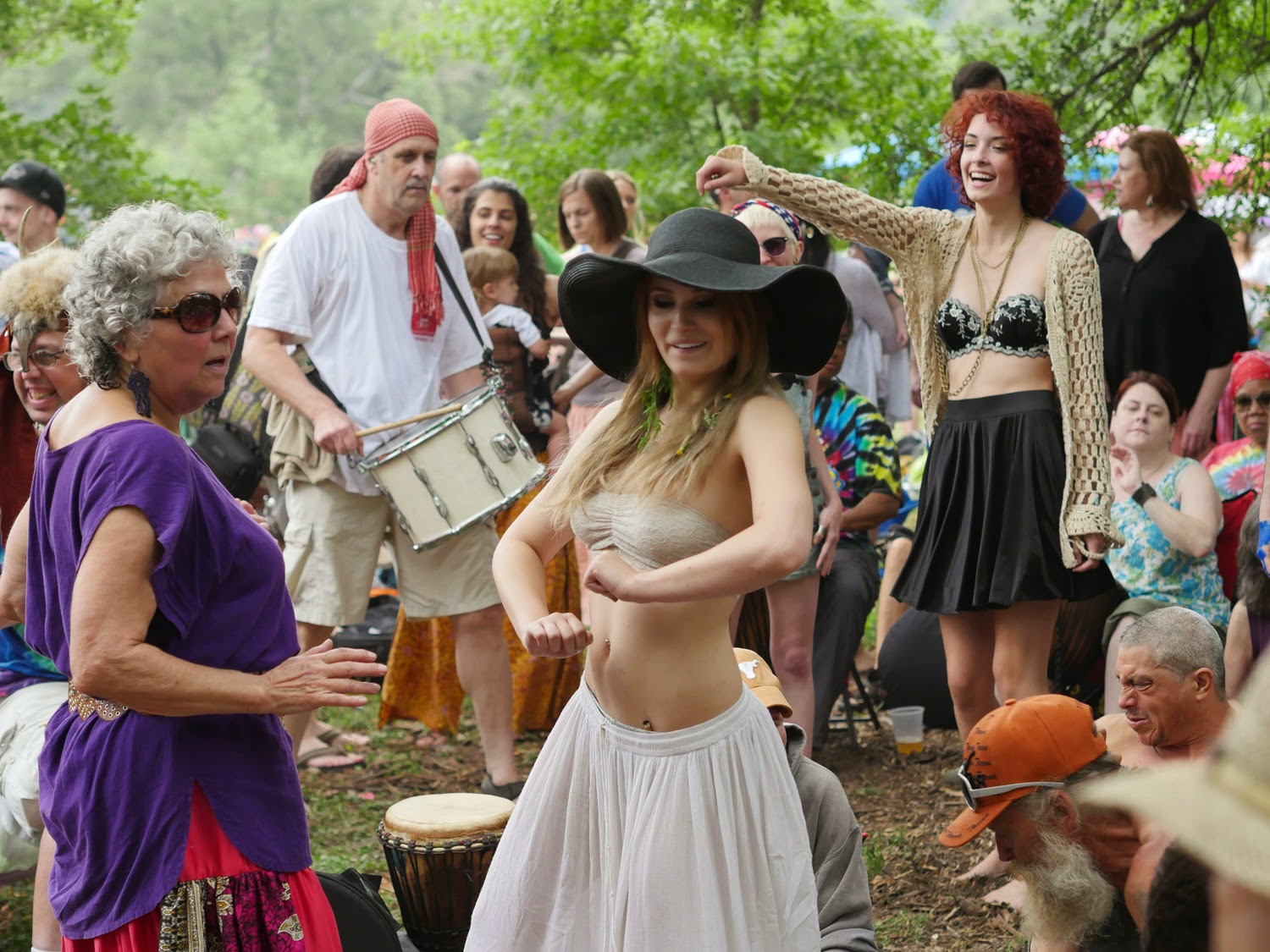 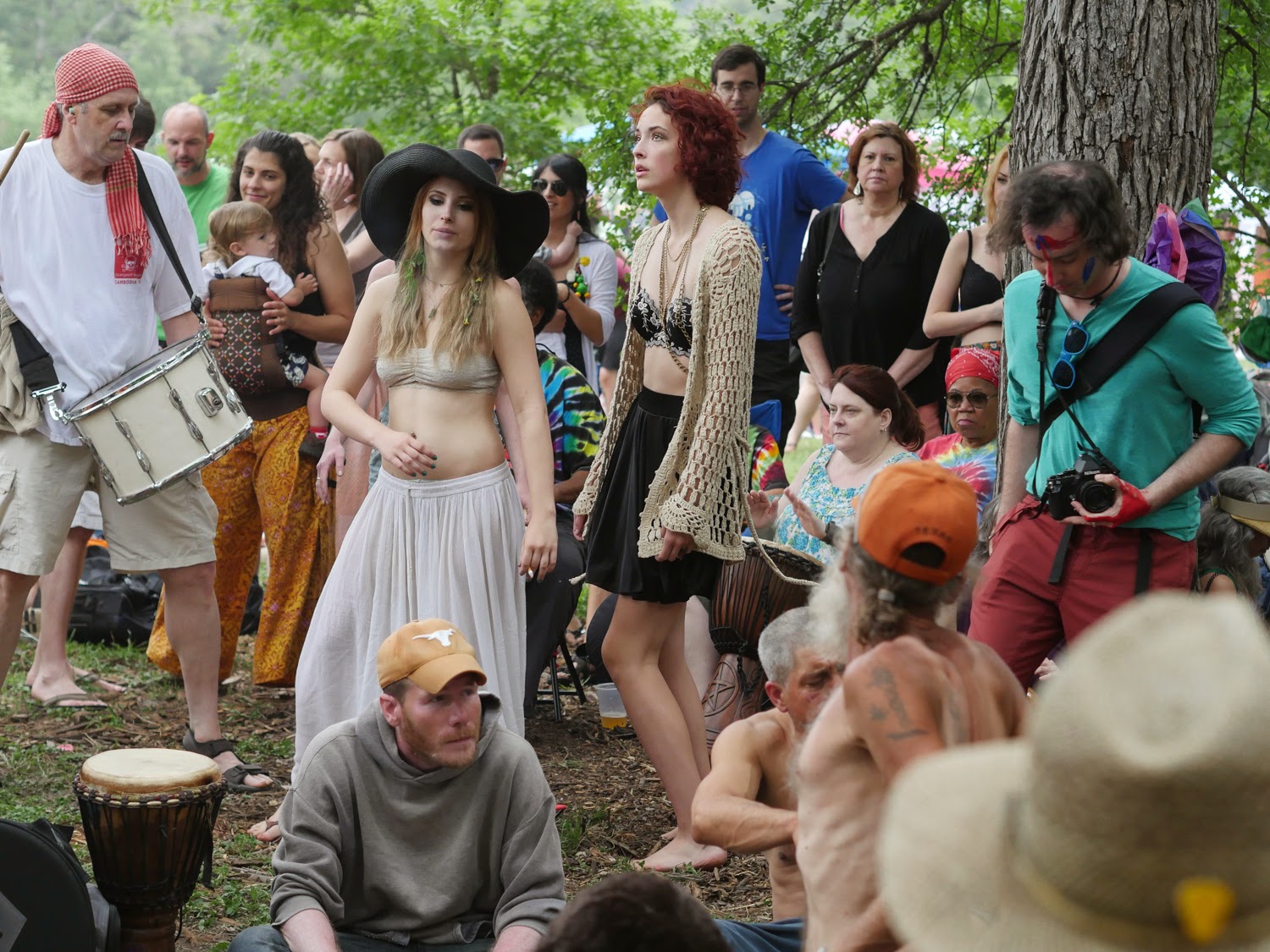 The dance circle. This year there was ongoing friction between the
drummers (who got there early and started their circle) and the ersatz "dancers."
One woman, wearing baggy red pants spent some good time
trying to push out the circumference of the circle so the
dancers could occupy the center. The back and forth was continuing
as I left. Hmmmm. 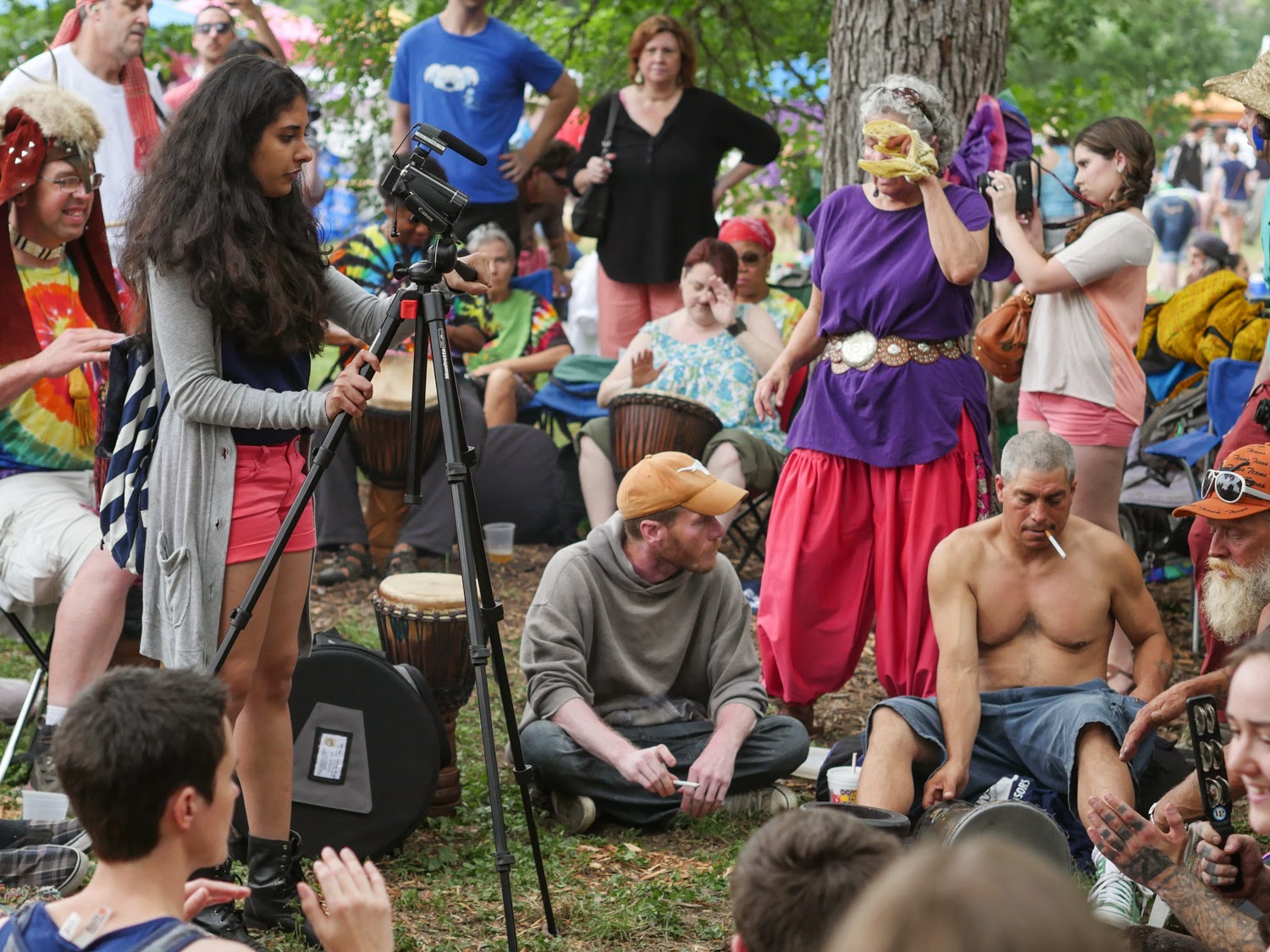 There were a number of obvious film students. Obvious from the labels on all their
equipment. But they plunged right into the middle of things and worked their
magic on apparently recalcitrant tripods. The drum circle didn't take notice. 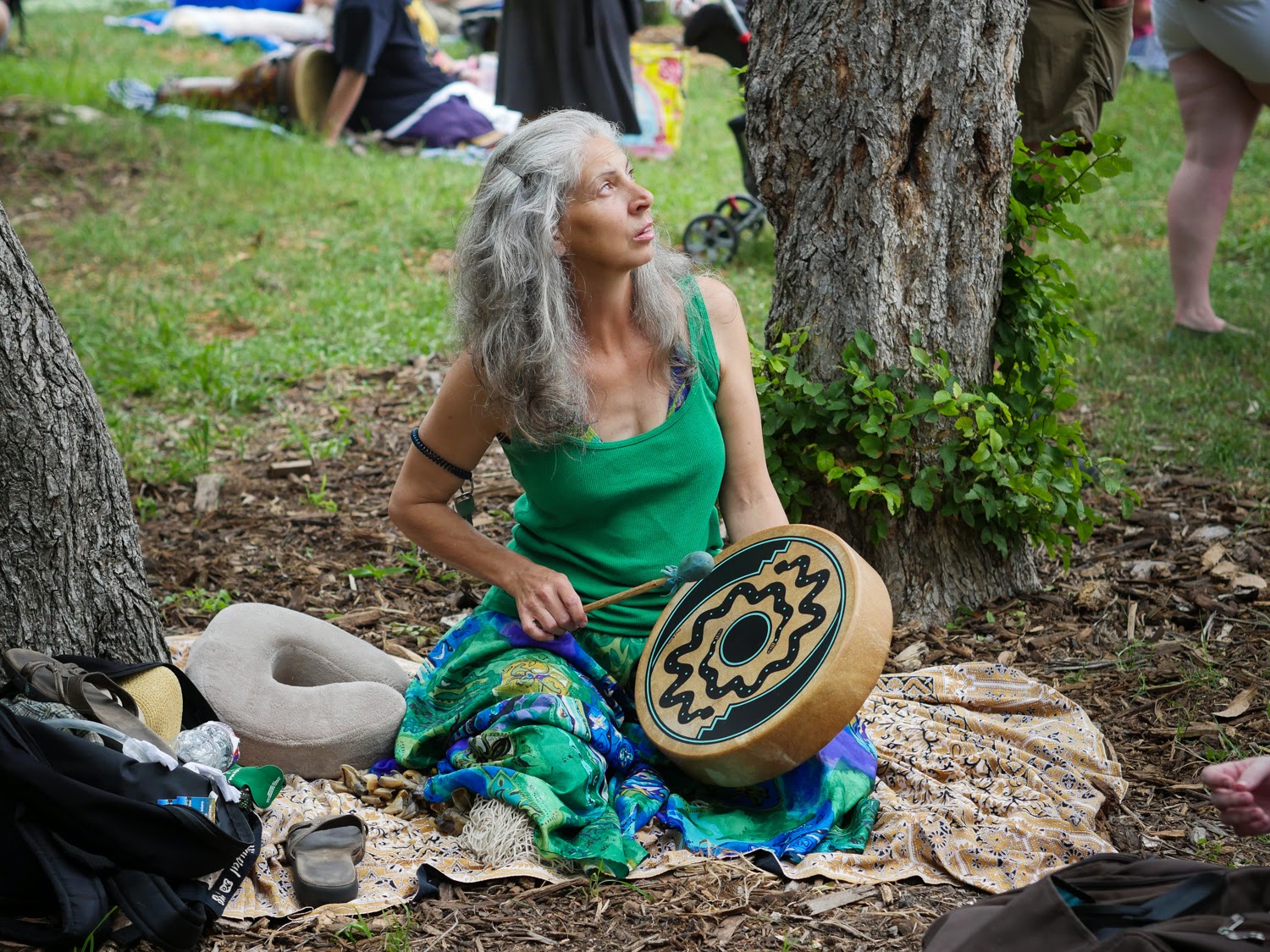 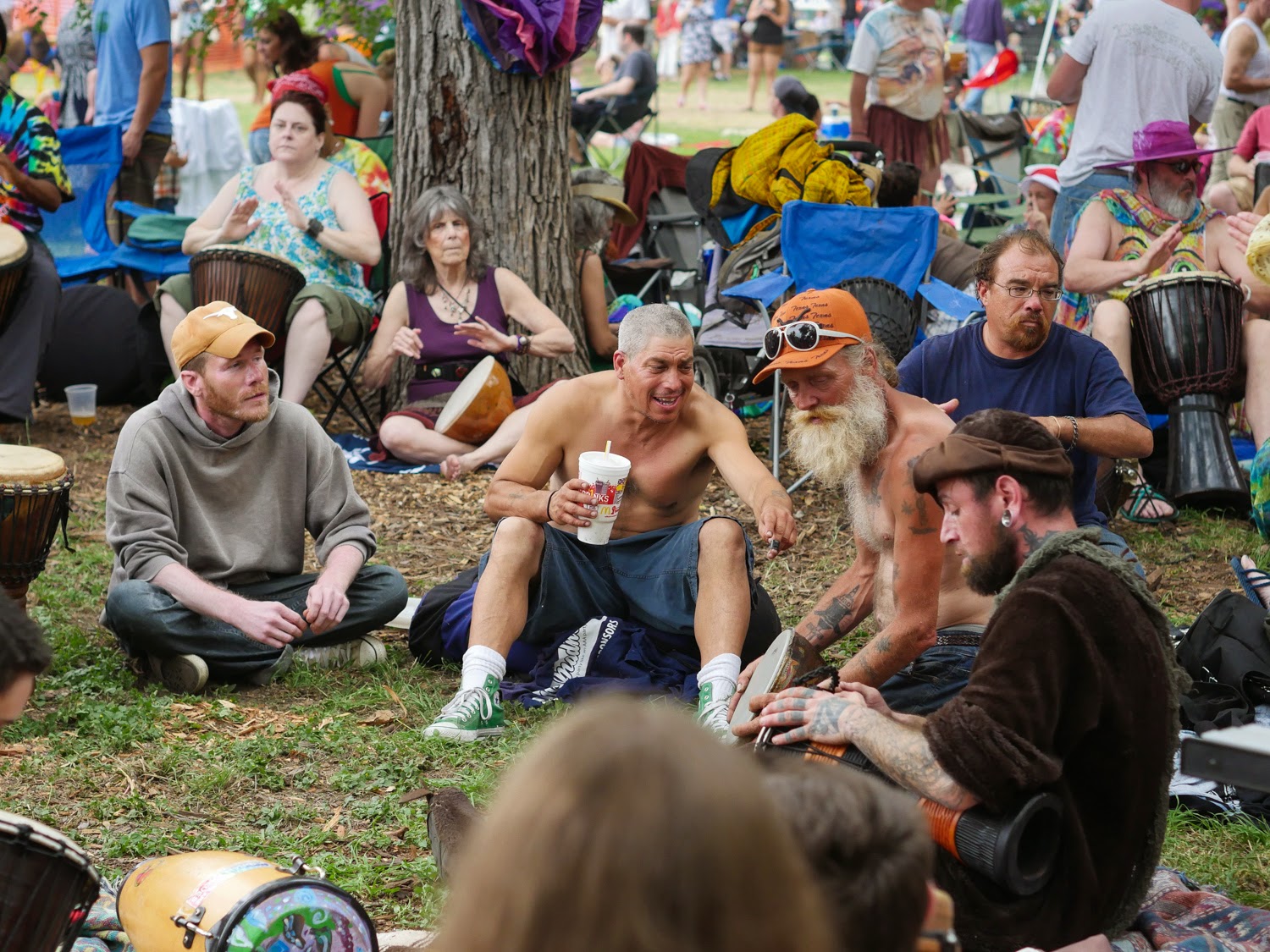 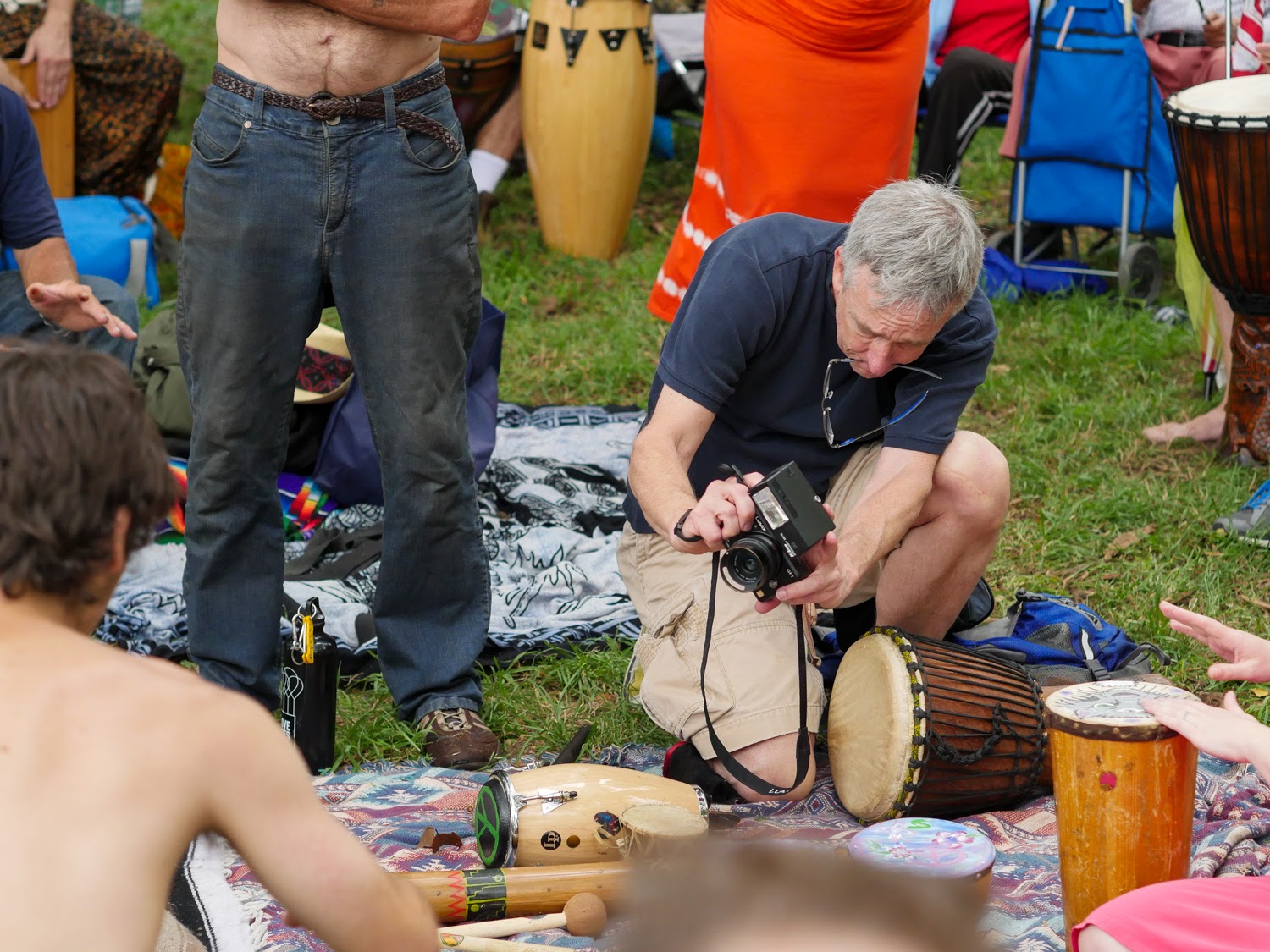 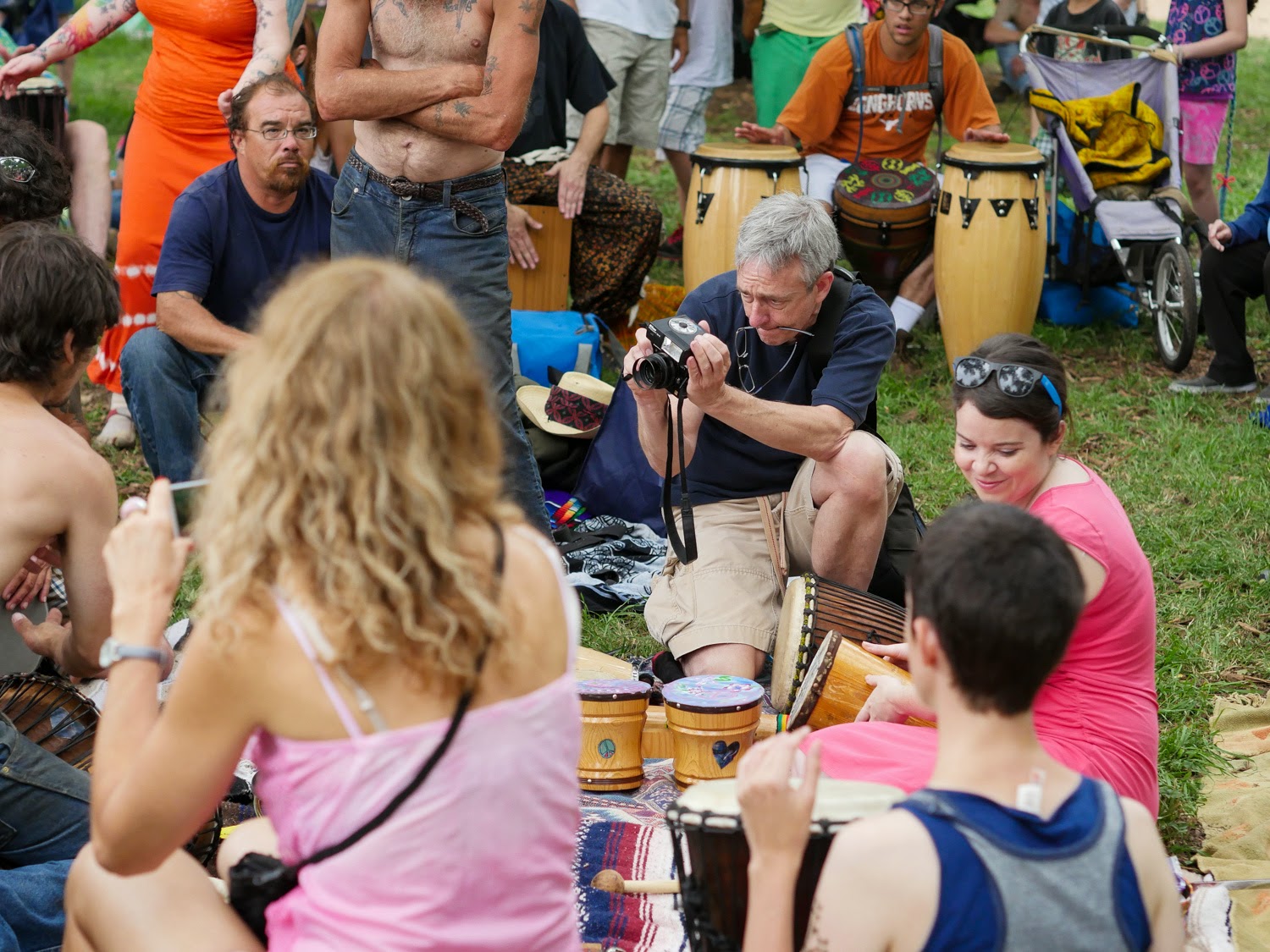 Intrepid Photographer with GF1 goes in for the shot. Small package and quiet attitude. 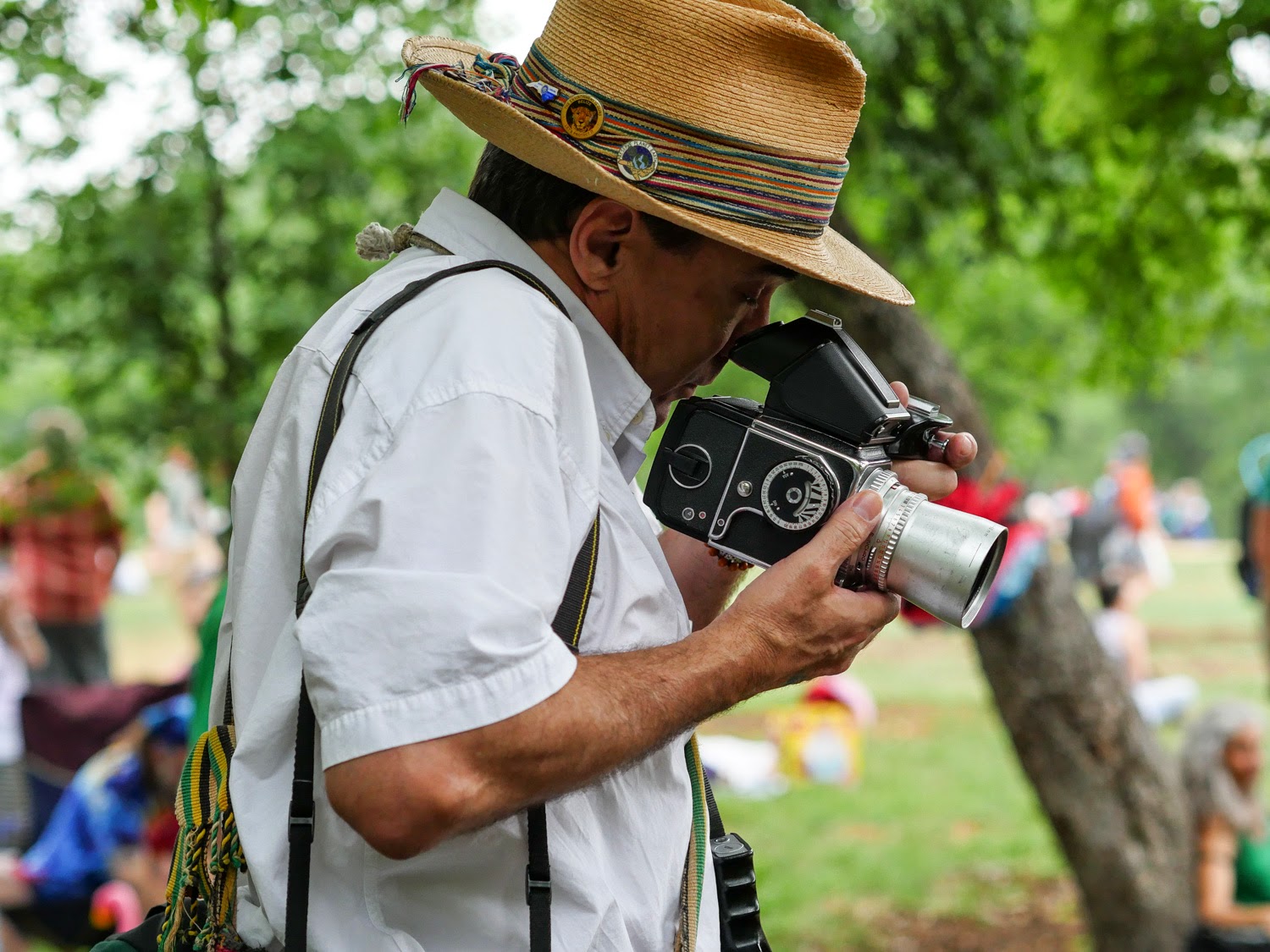 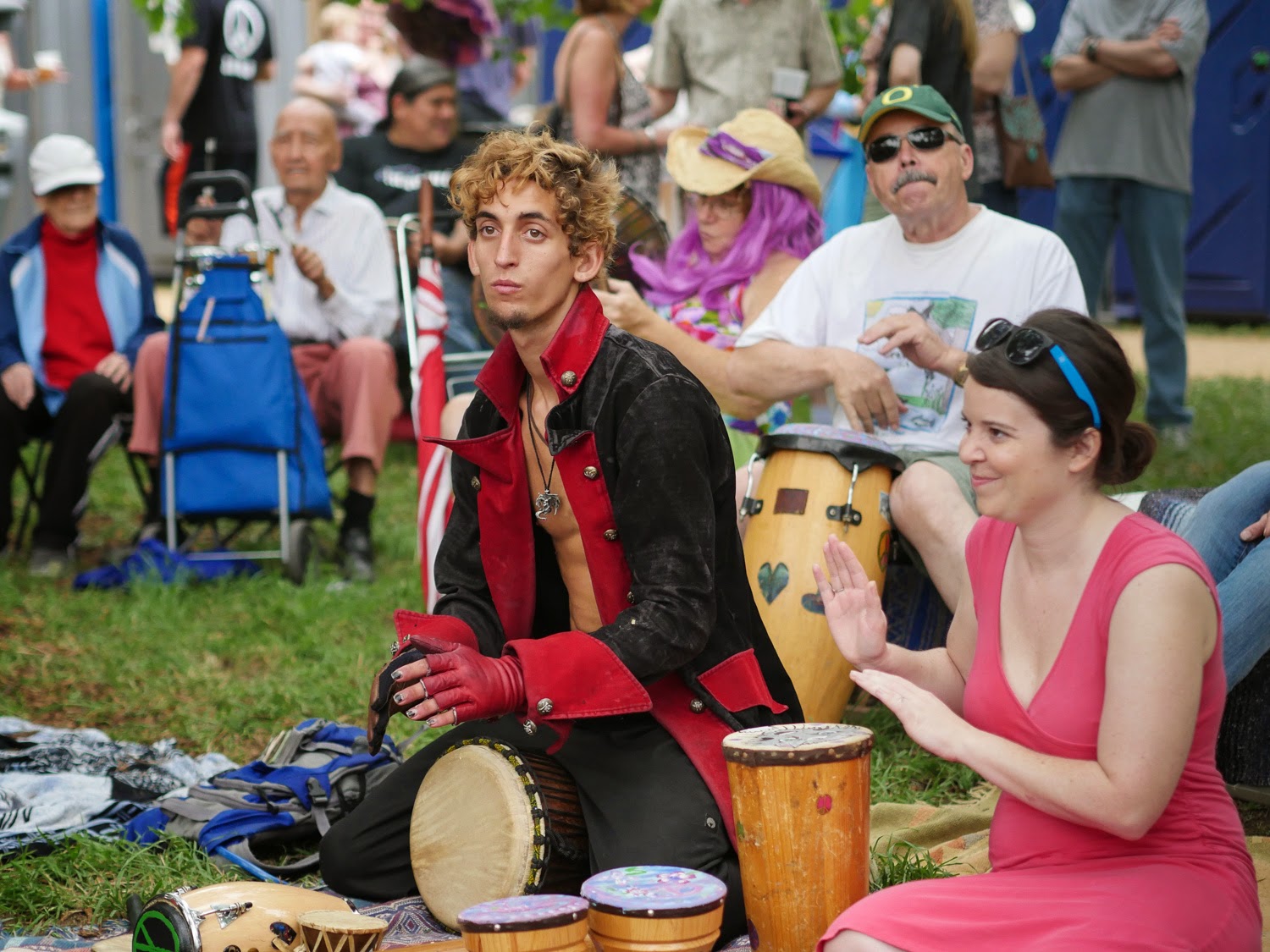 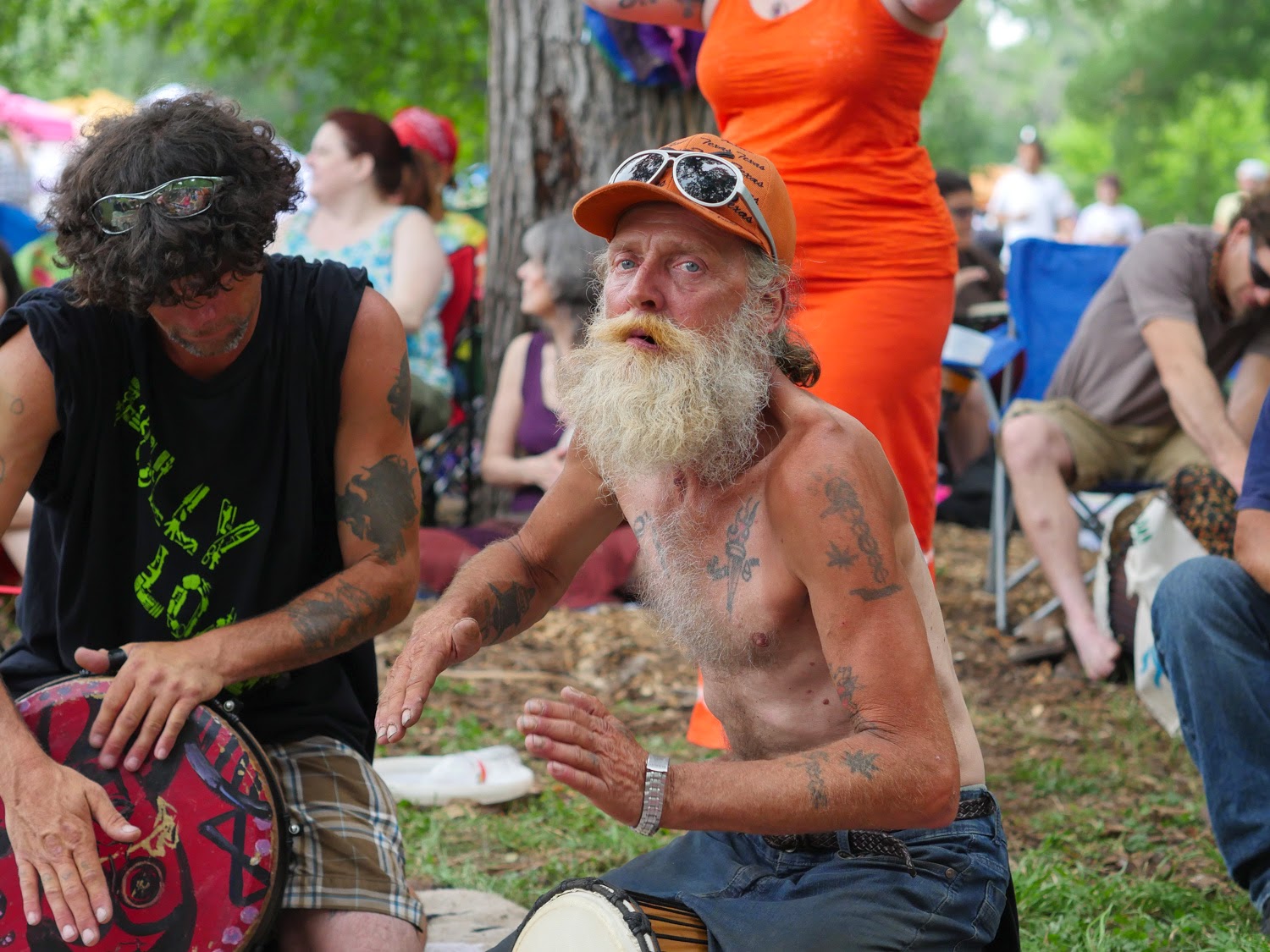 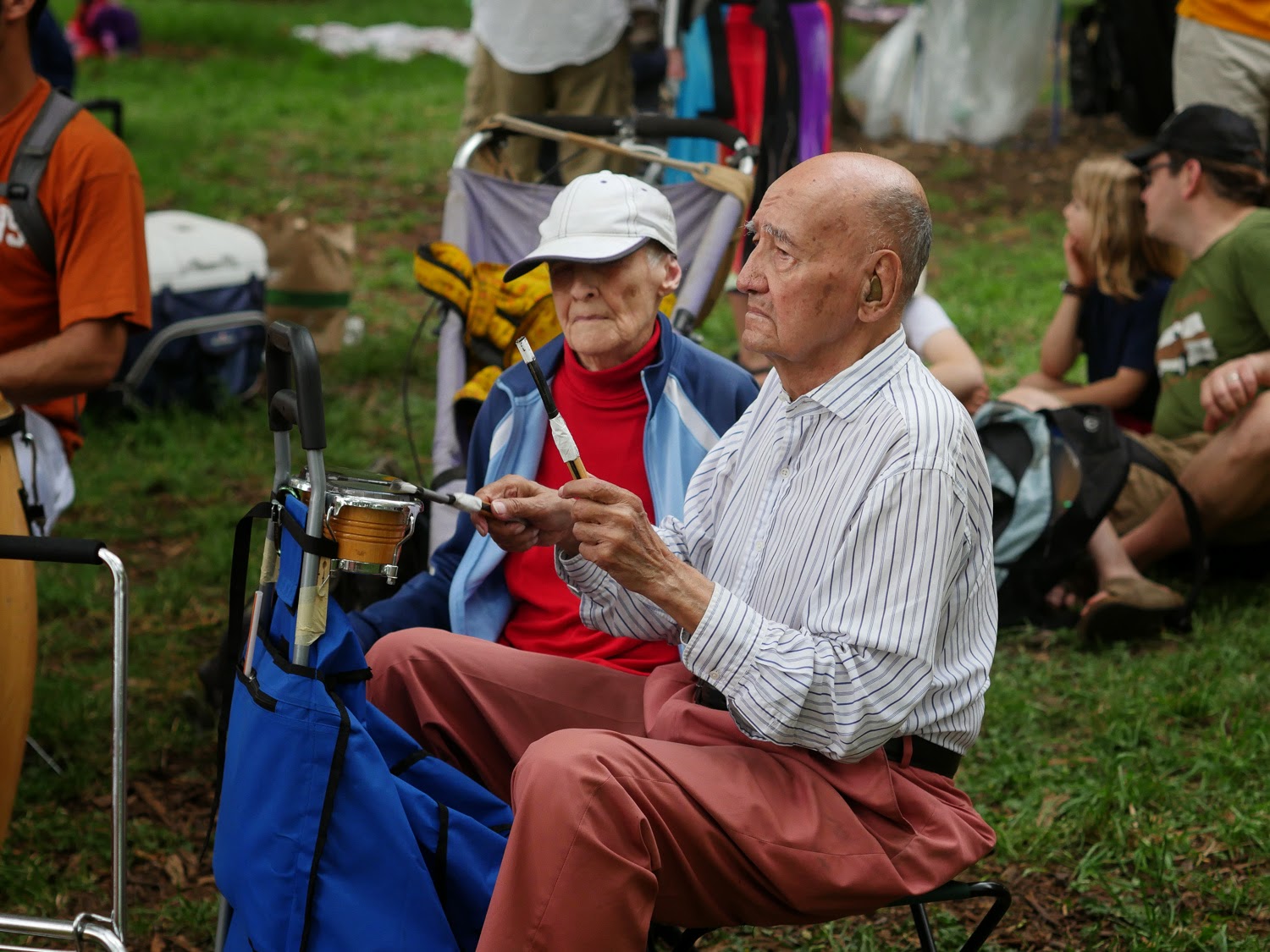 Drumming is not age specific. Good drumming is always welcome.

Eeyore's Birthday Party provided me with a good rationale for getting out with the new camera. Maybe I was too into the camera to be properly into the event. That, in itself, is a lesson for me.