Someone brought up the topic of used cameras recently. What can I say but, "Yes. Please." 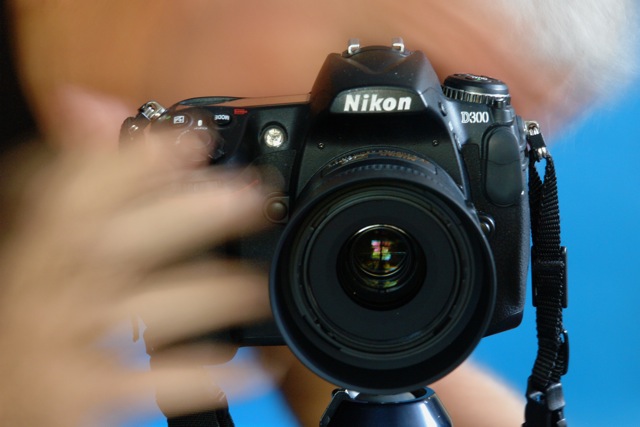 Remember when we thought $1995 cameras with 12 megapixels and
great ISO 400 performance rocked our photographic world?

I was just thinking about this the other day. One of our readers suggested writing a guide to buying used cameras. I think the market is too chaotic to write a piece that will stay timely for very long but it sure got me thinking about how far we've come and how cheaply one can buy a really, really good camera these days.

My experience as a digital camera buyer might be much different from that of an amateur because in the early days of the crossover we really did need to spend significant cash to get usable cameras for professional work. I remember that the new price of a Kodak DCS760 (six megapixels) was around $7,000 while the newer Nikon D2X I bought brand new was right at $5,000 for 12 megapixels. It shot fast and handled well but if you ventured over 400 ISO it was noisier than a UT football game.

The first camera from Nikon that had wide appeal, both among struggling pros and whimsical amateurs was probably the D100. For your $2,000 you got a six megapixel camera with a four frame raw buffer and nice performance all the way out to about 250 ISO. Yes, you could use Nikon lenses and flashes and yes, thought it was a pretty good back up camera. In its time...

The first sixteen megapixel camera is another one that I've owned. It was the Canon 1DSmk2 and it clocked in with a breathtaking new price of almost $8,000. But just look what you got!!! A massive camera that would shoot a real SIXTEEN megapixel file. And it was able to shoot those files at a whopping 4 frames per second!!!! It was actually a very good camera for its time and collectively it was a model of camera that was responsible for many full page magazine spreads and wonderfully detailed, printed brochures. Plus, you could hammer nails with it. You just couldn't really shoot with it over ISO640 if you wanted images without technicolor snow in them.

I guess my point is that we were able to make wonderful images (as long as we took the limitations into consideration) with lots of previous technology cameras---if we were willing to pay the price.
But I'm now officially tired of paying more money for a camera body than I have to. I get that lenses are pricey but they can be more or less permanent as long as you stay in the same system. Not so recent models of digital cameras. Now I want to pay about what I used to pay for good, solid, middle of the road film cameras and I want great results. Not ultimate, bleeding edge results, but really good results. Image quality that would have seemed magical just a few years ago. And to re-emphasize, I'd like to be spending between $400 and $600 on a camera body. That would be so cool because we could revert back to the way we shot cameras in the film days----a different prime on three different bodies. All with the same controls and set up. Imagine it... a fast wide angle on one, a fast short tele on the second and a longer, fast telephoto on the third. Or, one camera set up for color and one for black and white! The world of $400-600 camera bodies opens up more opportunities for us as shooters than you might imagine if your world camera view has always been about having the one (expensive) camera that has to do everything. 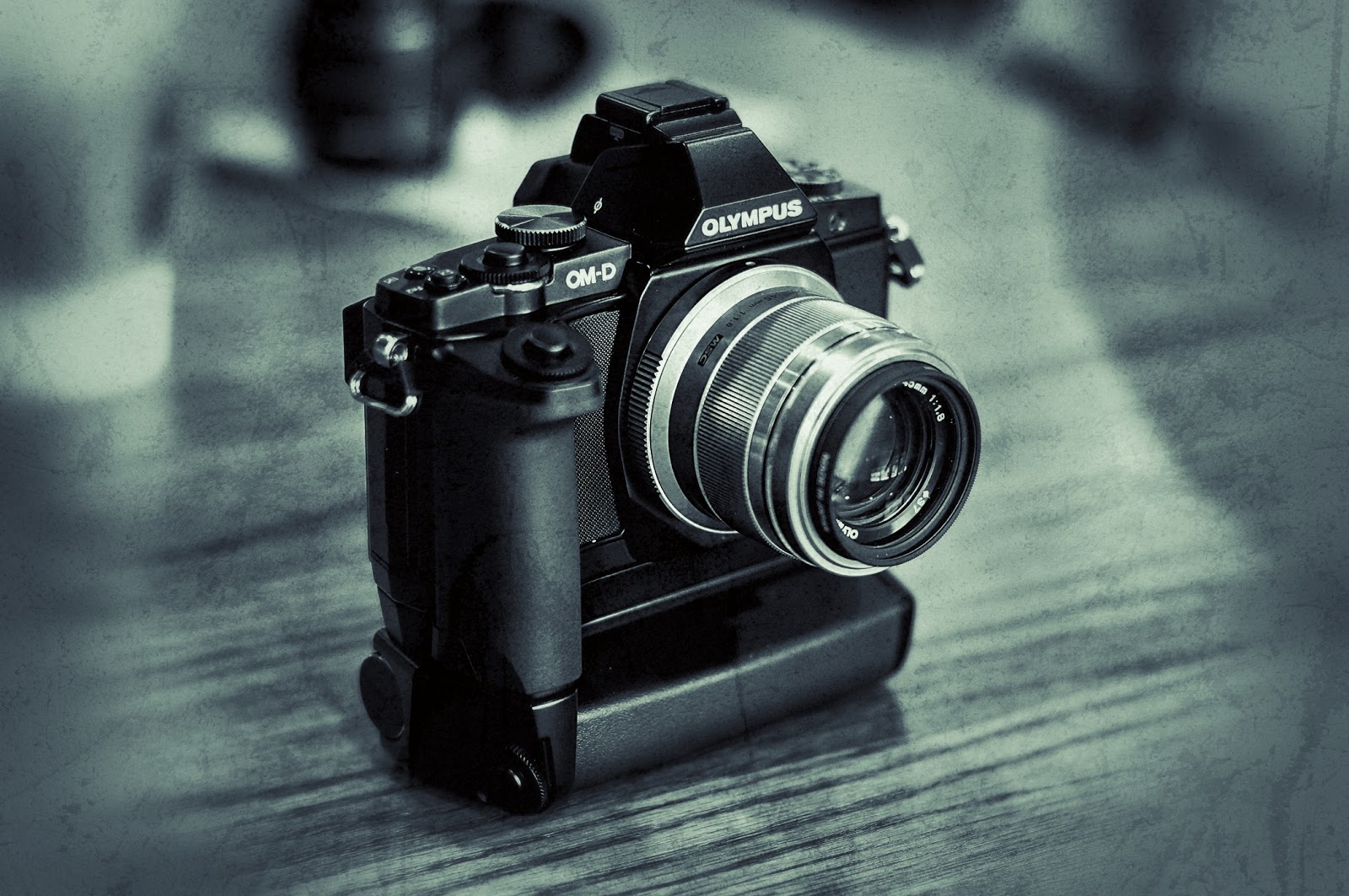 So, I am sure you read my blog where I mentioned buying a couple of the EM-5's recently. I would have loved to go straight to a brace of EM-1's but the price isn't dropping on those yet and, with the exception of one of the most beautiful EVFs on the martket, the actual I.Q. of the EM-1 isn't much different than the EM-5. I know, I've tested them.

I've had a good run of being able to buy used EM-5s for around $400 to $450 in really good condition. With low mileage. And one of them came with the HLD6 grip!!! (Thank you kind benefactor). Yesterday I was at Precision Camera and I couldn't help but notice (diagnosis: hypervigilant) a used EM-5 with a battery grip sitting on their used shelf. It was marked at too high a price but a bit of lighthearted haggling meant that I left the store with a pristine, chrome, EM-5 with grip for a little over $600. If you factor out the grip price it adds up to another $450 camera body for me.

Now, the way I figure it, I've essentially got three wonderful shooting machines for the price of one current EM-1. Give or take.

I have a job to photograph kids at a private school tomorrow. It's an all day gig and there's lots to cover. The school will use the resulting images for their new website. They hired me because I've worked with them before and they love the images I make of the kids. They said something about my emotional maturity being a good match for the younger students but I don't know what they meant.

The way I like to jobs such as these is much the same as the way I like shooting jobs like the math conference I was lucky enough to shoot this Summer in Denver. I work best when I go in three cameras deep and no swinging camera bag over one shoulder. In Denver it was all Panasonic but this time I'm going all Olympus. All identical camera models. All set up exactly the same way. (Yes, I have finally mastered the menus!).

I'm putting the 17mm f1.8 on one body, the 25mm f1.4 on a second body and the 45mm f1.8 on the third body. I've also still got a loaner 75mm f1.8 and I'll keep that in the bag along with the Panasonic 35-100mm just in case (the bag stays in the office until needed). This gives me a nice variety to work with and the ability to interchange cameras without stress. No lens changing required.

I would never have spent $3600 to buy three EM-5's at once, new. Maybe if I'd been starting from scratch but as disjointed as I am in camera inventory it just never pans out that way in real life. But used? Over the past two months? No brainer (and you can decide how to take the "no brainer" label...).

Right now the EM-5 is in the same I.Q. ballpark as nearly every APS-C camera but it gains an advantage with the really good image stabilization. It's not full frame we have fast lenses for it that work very well nearly wide open. At $400-$500 at two years old, used, they are a  bargain for people who actually want to use them to, well, take pictures.

With prices like that we are now in the ballpark that we used to play in during the days of film and cameras like the Nikon FM, the Olympus OM1,2,3,4, the Pentax Super ME and MX, and quite a few more. I can hardly wait to start photographing tomorrow. We'll all have a great time!

And that starts my series about buying used digital cameras. It's even more fun that buying new.

(Props to Precision. Their policy is a 10 day return on used gear. Buy it. Use it. Test it. and if it doesn't work as specified, return it for a refund.)

Stock up on extra copies of the novel, The Lisbon Portfolio, the holidays are just around the corner!!!!!

Posted by Kirk, Photographer/Writer at 17:32 20 comments: