The hard thing about photography is that it takes time to do and there's never a guarantee that you'll find the subjects you want. 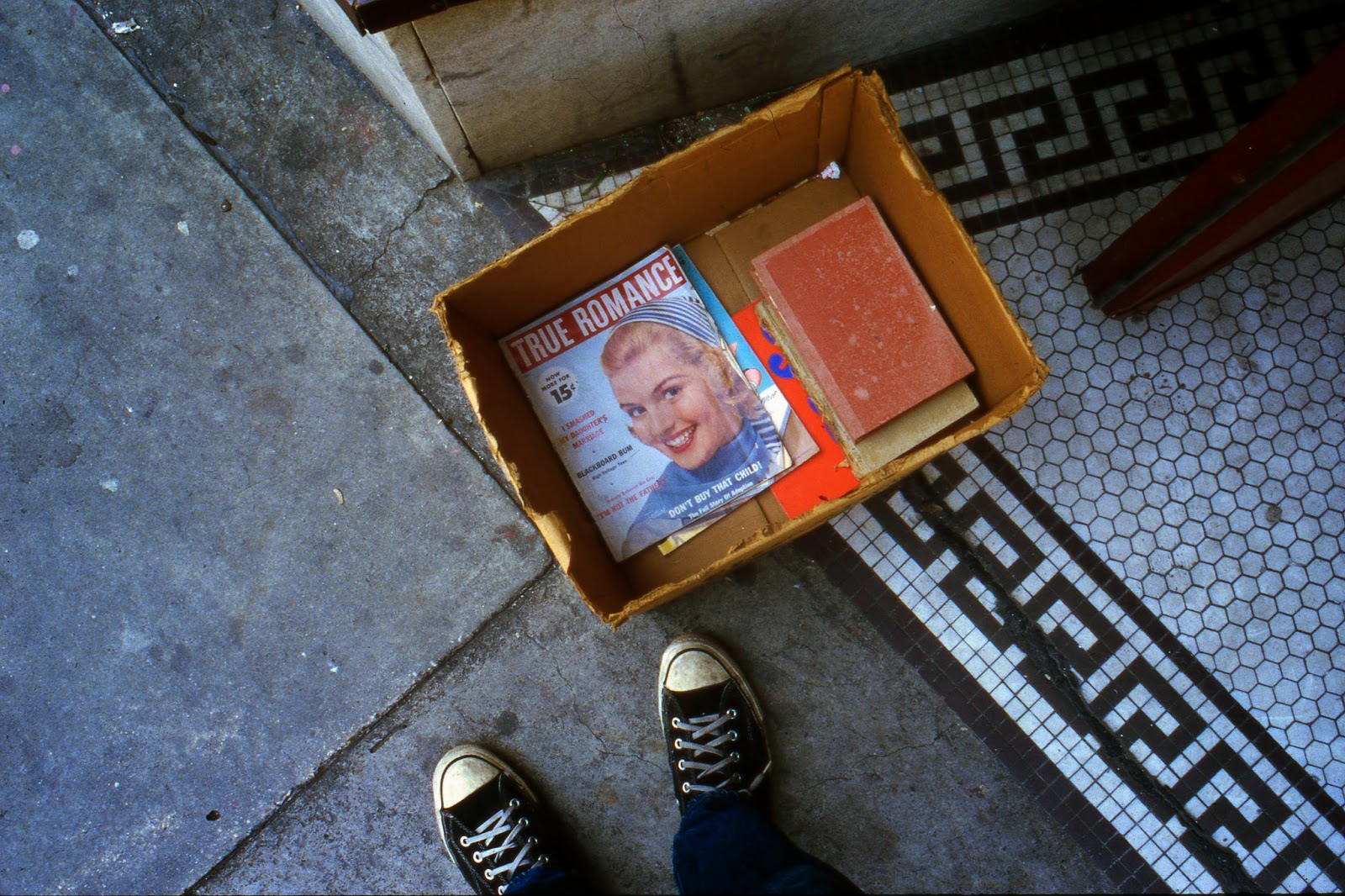 I have the world's least efficient hobby. I like to take photographs of people and of things I find interesting, cool, funny, beautiful, bittersweet, bizarre, sensual, or even nostalgic. I practice my hobby by  choosing a camera and a lens and then driving or walking to an area that I think holds the promise or potential of providing any subset of these thing. Then I walk around all day long just casually looking. Sometimes I'll go to San Antonio and walk around the downtown area from early morning on a Saturday until sundown. Sometimes I feel like I'm coming home with little treasures captured in my camera and other times I'll be frustrated and feel as though I'm wasting my time.

As cities become more and more homogenized there are fewer interesting anomalies to look at and enjoy. When I come home empty handed I start to feel as though I should have worked on something commercial. Instead of roaming around in old clothes and tennis shoes with a jewel like camera in my hands I should be concocting some sort of marketing piece or spend a warm and viscous afternoon calling clients and potential clients on the phone, trying to set up an appointment to show them other commercial work that I've done.

If it's been a particularly fallow trip I consider that I may as well get a real job and spend eight hours a day in a building somewhere with canned air, sitting behind an industrial desk, working on templated software, getting up every once in a while to fetch and drink a diet Coke, all the while feeling the back of my eyes burning from the almost undetectable flicker of the sixty cycle fluorescent lights. Occasionally heading down the hall to ask Doreen in accounting if we can budget money to do something meaningless and mundane. I try to weigh the advantages of working for someone else and I always imagine that it would be in some company whose offices are in North Austin. I also imagine that the hours will be strictly enforced. I'll be on the Mopac Expressway in my little car sitting motionless or near motionless for forty-five minutes to an hour. In each direction. I'll listen to the same stories (at least they seem like the same stories) over and over again on NPR. Or I'll listen to the worshipful gun nuts on one of the other stations talk about which automatic weapon Jesus would have owned and how vaccines are turning us all into communist leeches.

But some days I go out into a city with my camera in my hand and twenty dollars in my pocket and everything is fun. Fun and strange images and juxtapositions erupt merrily with every few steps. I meet people who are a bit insane and generally far more interesting than most people you will ever meet in the sort of antiseptic, middle class existence that we create in the hopes that our isolation will ensure our personal safety. Is that scruffy guy with the old digital Rebel the next Robert Frank? Is the woman behind the counter of the donut shop really engaged in selling donuts or is she an actor playing the part of a woman selling donuts?

I'll bet I walked fifteen miles the last time I was in San Antonio pursuing my lonely hobby. I must have looked at more street level windows and doors than I could keep count of. I drank coffee at the Apache dinner but it wasn't very good. I found a Starbucks and the coffee was much better. Old men stopped to ask me if my camera was digital. Young people avoided me so I couldn't get a toehold and start off on a never ending story like their uncles or their parents.

My uniform was inconsistent. I could see that in the eyes of the policemen I walked past. The shorts were a green that was becoming so washed out that they are starting to look tan. I've lost weight and the shorts are just a bit too baggy. I was wearing ankle high, white sports socks. The nondescript gray pullover shirt was vague but it came from Barney's. And my new walking shoes were totally out of the consistent uniform pattern. They were a brand called Ahnu and they cost $125.

The camera of the day was something equally vague. A mid level Nikon digital or an early mirror less. My watch was a $15 Casio that is more accurate than my $1200 Fortis which sits on my night table running down, automatically.

In days past a camera was an invitation to learn more and lean in. To strangers it was a fun momentary connection. Some were happy to have been considered interesting while some just acquiesced for no real reason other than it was the stream of least resistance. In days past having a camera pointed at a person tended to validate their own idea of their own image. If you pointed it at a woman she may have assumed that you were validating her beauty. If you pointed it at a person in a military uniform it validated the idea that you appreciated their service. The bottom line was that having a camera pointed at a person made them realize that they were interesting. At least to one person and at least right now, at that moment.

Now the world is different. The mood has changed and the innocence of creating images just for the sake of creation is gone. It's been replaced by suspicion and the idea that photographers are participating in a mercantile skim in which the images, stolen from the subject, becomes so much irretrievable raw material for a giant stock photography site where everyone is getting rich but the subject. Now they want to be cut into the deal. Photograph someone of the other gender and you are suspected of devious intentions. Photograph a person in uniform and you are a de facto terrorist.

And in spite of everything I've said I still love it. I love the vagaries and uncertainty of just walking and looking. I love the challenge of winning over people to my fleeting and mostly ephemeral cause. I like the feeling of driving back up the highway with a card full of latent images just waiting their turn to promenade across my monitor and remind me of how the air smelled and how the heat played across my skin in the afternoon. I love to sift through the images of random people and piece together my fictional version of their story just from the images and from the bits and pieces we shared in our brief and shallow encounters.

And I am reminded that, in a sense, the real value of walking around the streets with a camera is the hard-to-describe but authentic and joyous immersion in actual, real life. Not a life of trading time for money or trading blunted curiosity for safety. In some sense the walk through other people's lives is a never ending search for some sense of universal belonging and understanding that I can interpret and weave into my own existence. The images are tiny, encapsulated visual novels. I can read and re-read them into my memory at any time. And every time I engage them their story seems to change. And I know that I've changed and even though I'm looking straight ahead at the same images I know I'm looking through them at a different angle.

Posted by Kirk, Photographer/Writer at 17:02 16 comments:

Back at Zach for a second "King and I" shoot. Horsing around with an old 60mm f1.5 lens. 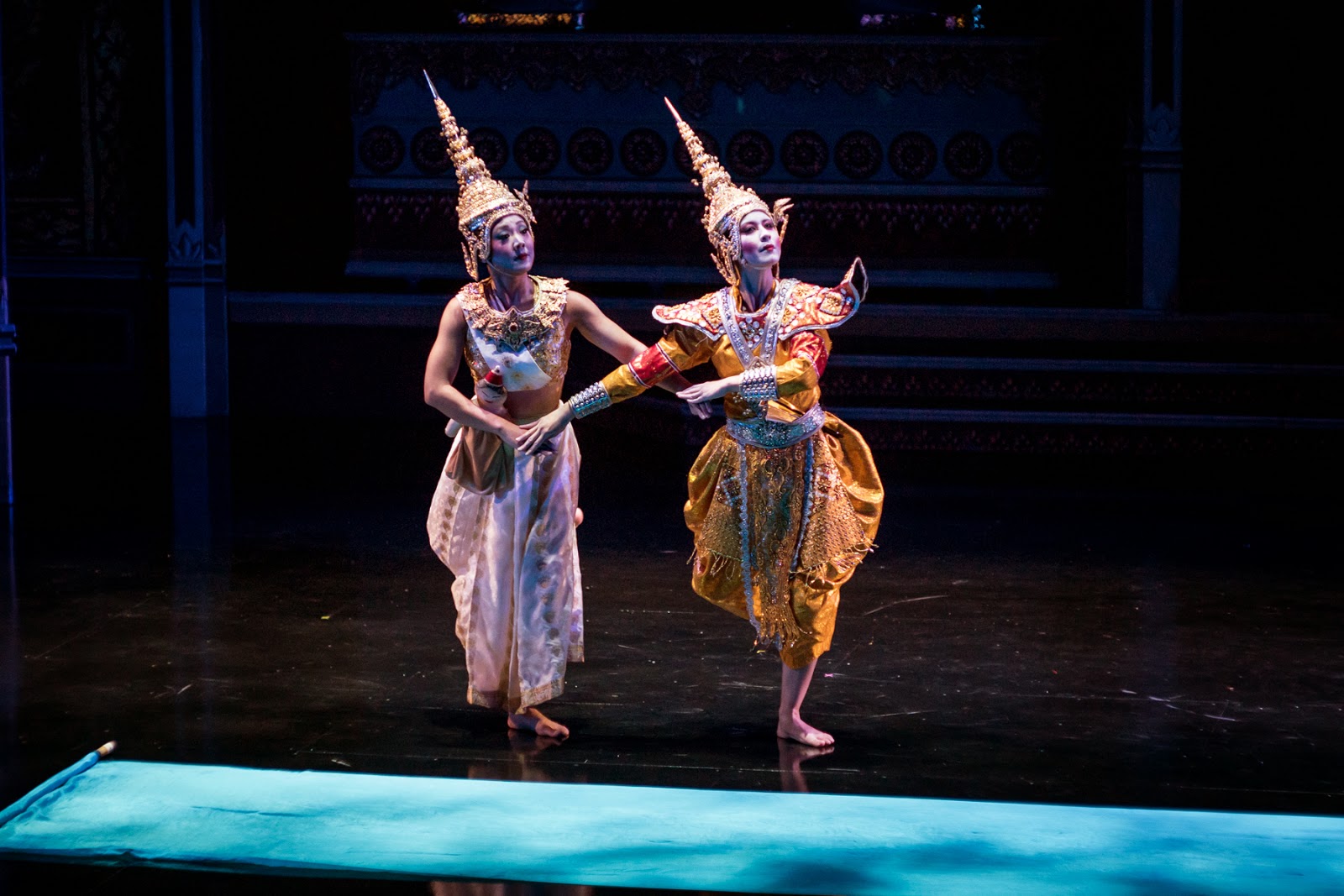 There are two different sets of kids who perform in "The King and I" at Zach Theatre. They alternate during the week so that no child misses too much school, homework and sleep. The marketing folks at the theater asked me if I'd come back and do a second set of images for the kids. My goal yesterday evening was to shoot as many images of the kids as I could instead of shooting the big, dramatic, adult actor moments.

I met Belinda for dinner and we both went. I wasn't settled on which camera system I'd end up using so I brought along a couple. We'd be seated on a "walk-through" row, middle of the house in both axis. That meant an aisle in front of us and more elevated seating behind us. Still, I'd be shooting during an actual performance with a full, paying audience, so my choice of camera system was a bit more important than it would have been on a dress rehearsal night.

Originally I wanted to shoot with the Nikon D7100. On paper the 7100 has the best high ISO performance of my current cameras and I also wanted to use the CX crop mode (1.3 crop gets the camera to about an m4:3 sensor size with 15 megapixels and a commensurately smaller raw file size. Belinda and I got into the theater early to do a little sonic testing. Even in its quiet mode the D7100 was much too loud. I even tried swaddling it in neoprene but that wasn't enough to squelch the shutter and mirror noise. Back in the bag it goes. Pity since the 85mm lens with the CX crop would have given me the equivalent of a 170mm f1.8...

Next up was the Samsung NX30. I figured that it has an electronic shutter setting and if it works as the Panasonic e-shutter works it should be silent. Well, turns out the first "curtain" is electronic but there's still a loud capping noise somewhere in the process so that one headed back into the bag as well. I finally grabbed the Panasonic GH4 and put it into the silent mode----where it was absolutely silent. The only noise was my exhale as I gently squeezed the shutter button.

I shot most of the show with the 35-100mm f2.8 and truth be told I could have used another 100mm of reach from time to time but there's always more that I'd like no matter which set up I'm shooting.
For the dance scene above, with no kiddos on stage, I decided to try out the ancient Olympus Pen 60mm f1.5. in combination with the GH4's focus peaking (the lens is strictly manual in every sense!).

The EVF indicated exposure was perfect and, considering that I was being brave and using the lens wide open for the most part, the focus peaking was pretty darn good. Especially when one considers the lower light levels, the constant subject movement and scene contrast. The camera's focus peaking worked well and I was able to get satisfactory focusing on 95% of the frames attempted.

I figure if you can shoot an ancient lens in manual, focus it manually and do manual exposure as well as a bit of white balance adjustment on the fly still and come away with decent images you are probably zeroed in on your technical game. It was fun to pull out and work with a classic optic. It was even more fun when the old lens is given an "assist" from a new camera. 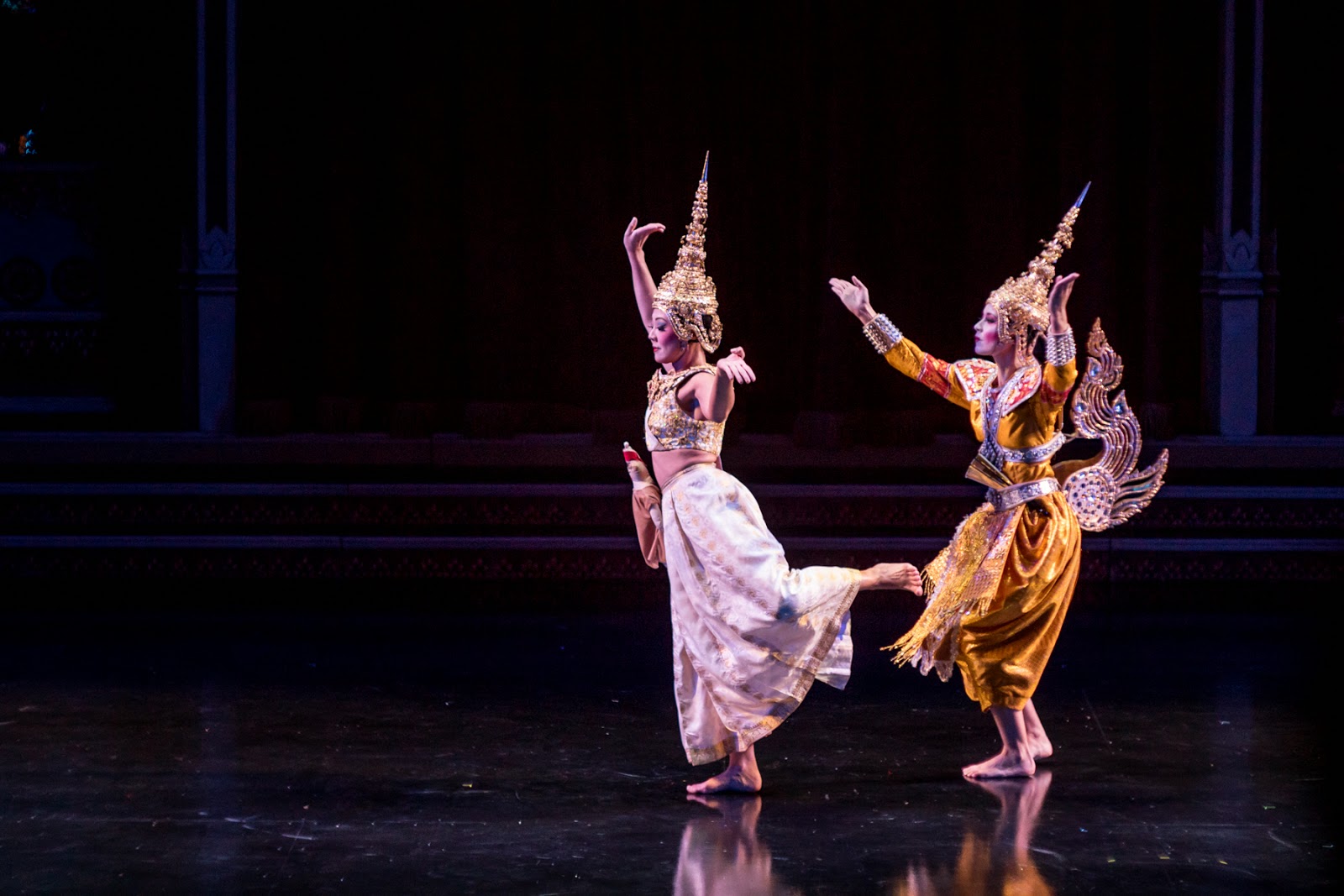 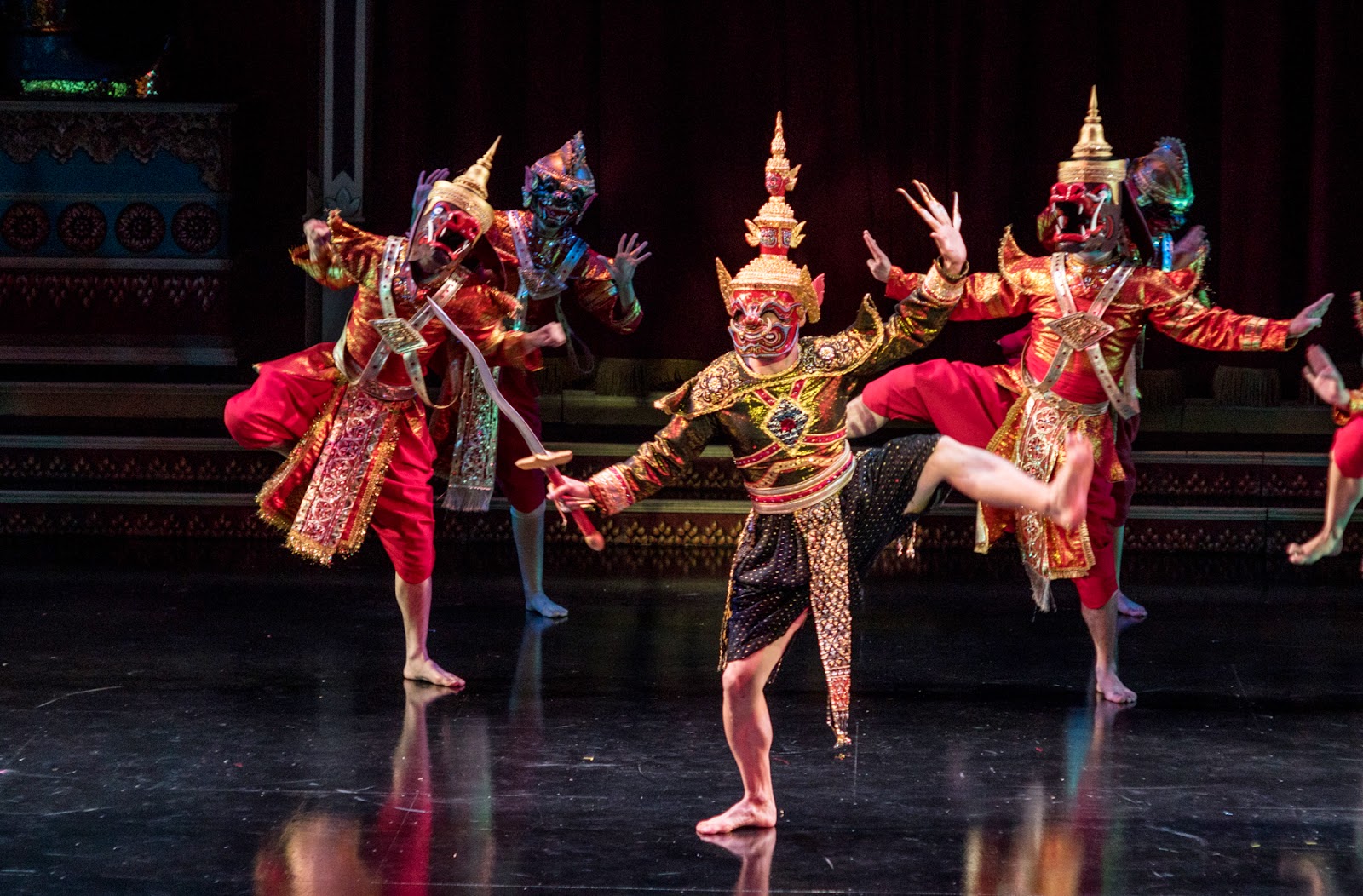 added in the afternoon: I forgot to mention that the play was wonderful. Mel as "the King" was phenomenal while Jill Blackwood is always just perfect. Another treat for me were the huge backgrounds "outside" the palace windows. They absolutely glowed at "twilight." I'll go back a third time just so I can enjoy the whole spectacle without a camera pressed against my face.

Posted by Kirk, Photographer/Writer at 13:21 3 comments: