The agony and the near ecstasy of using the FZ1000 for an event. (note: for rain, low light, and flash, keep your DSLR at hand). 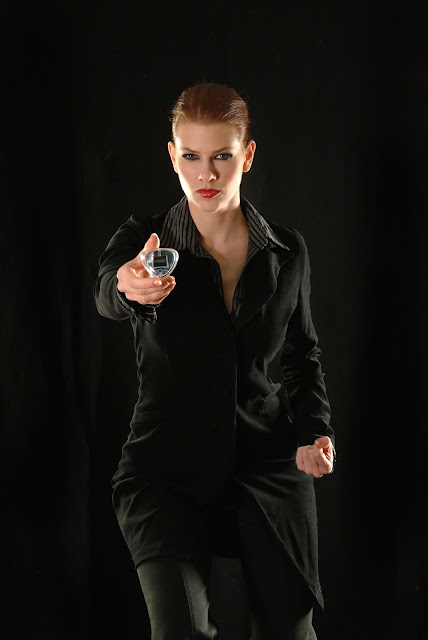 Just a fun photograph. Not even tangentially associated with the
subject matter of the blog. Shot by me for a telecom company in
the earlier days of digital.

Ah. It was the ultimate in hubris from a smart ass photographer who thought his skill and talent could overwhelm and cheat the laws of physics only to end up chained to a rock, waiting for the eagle to come by and gnaw at his liver....

So, I had a little luck in some nice light in the middle of the day and shot a few images I liked with the Panasonic FZ 1000 and then I went off the deep end. I capriciously decided that I could press the one inch sensor into any job at any time. My luck held until the second day of a four day long job. I showed up bright and early for an assignment in a hotel ballroom to discover that someone had gelled the ballroom down lights of part of the room with orange theatrical gels. Other parts of the ballroom were lit with naked fluorescent can lights and at the back of the room was a 10 by 16 foot, high output LED video screen which would show massive versions of speakers' PowerPoint presentations.

The lights were turned down low to prevent washing out the LED screen, but honesty, the screen was so bright they needn't have bothered. The room had four color sections: One part was cast in deep orange with scant little from any other part of the spectrum. The second were the outposts of greenish, unfiltered fluorescent lights. The third color section was the ever changing wash of mostly blueish light coming off the amazingly powerful video screen. And finally, there were areas where attendees at this large, roundtable discussion were not lit. At all. This was a location designed to kill the spirit of any photographer. Especially one who had accepted the client request not to use any sort of flash.

I was early and as I stared around the hellish ballroom (both figuratively and color wise) I got angry, frustrated and a bit nervous. I still held out hope, however, that by sheer dint of experience, I would be able to pull it off. "It" being gorgeous, thoughtful photographs of people engaged in the give and take of spirited debate and conceptual sharing.

Well, the problem with orange gelled anything is that it narrows the available spectrum for the camera sensor. Essentially the wavelengths being delivered to the sensor in this case are almost entirely in the red spectrum and any attempt at color balancing causes the camera to push the blue and green channels to the limits. That's where the noise lives. And then the noise reduction kicks in and everything is a mess. I gave it a valiant try but I could tell the files were always going to be either mostly orange or mostly noisy. Especially above 1600 ISO.

Fortunately, a stint in the Boy Scouts back in the 1960s left me with the mindset of always being prepared. I tossed the little(?) Panasonic back into its bag and went up to my hotel room to fetch the "safety" camera; the Nikon D750 and it's pal, the 24-120mm lens. The images will still be mostly orange but the camera handles the noise better at the elevated ISO at which I had to shoot.

I learned a lot by pressing the wrong camera into the wrong job. I learned that the one inch cameras are good at low noise file production if the circumstances are optimal. That includes full spectrum light sources and enough light to register. For the record, the fz 1000 had no trouble focusing on anything I wanted it to focus on. It was at least as good in focusing as the Nikon D750. Maybe better.

I learned that I can only get the flash exposures I want with the consistency I need if I use flashes in a manual exposure mode on the mirrorless cameras (a lesson I learn again and again). I set the flash at 1/8th or 1/16th power and use the guide number method for determining exposure. It works all the time but it's not automatic. Your brain has to be engaged. When I switched over to the Nikon the flash on full TTL auto was right on the money time after time.

Does this mean I'm over the fz1000? Not at all. But I'll use it more intelligently in the future. It's a great walk around camera and a great daylight camera but it's hopelessly outclassed by the D750 when it comes to creating files under mixed light at ISO 6400, no matter how badly I wish it wasn't so.

But, let me tell you where the fz 1000 does shine; it's a wonderful and inexpensive 4K video camera. My kid's birthday was last week and he's off at school 2,000 miles from home. I thought it would be fun and would make him smile if I could put together a video of his Austin friends wishing him well for his birthday. I went around with the fz 1000 and a small microphone and interviewed as many of his friends as I could find. I also got on camera birthday wishes from the chefs and owners of his favorite restaurants, etc. In every case the video was perfect. Highly detailed and wonderful skin tones under lots of different available light sources.

I wish Panasonic had given me a headphone jack so I could monitor what kind of sound I'm getting but it's not a deal killer for a camera that generates such nice files. I'll work around that one oversight.

I mentioned the ecstasy of using the fz 1000 as well as the agony outlined above. Here's where it shines: I needed to photograph two concerts. I used the camera as an available light concert camera and having a 400mm equivalent along with massively good I.S. meant I could zoom in and create tight headshot without having to huge the stage and be in everyone's face. The images were great.

We also did a "grip and grin" session with a band and some clients, against a step-and-repeat background and once I dialed in an off camera flash correctly the camera was very easy to work with and the files matched the quality I would expect from a much more expensive camera and lens combination. Use this camera at ISO 200-400 and you'll get wonderful images. Use it at 1600 ISO in the right light and you'll still get wonderful images. Use it in an impossible situation for any camera and it's guaranteed to fail.

I'm keeping mine around. It's a perfect casual shooter and a seriously good video camera. Just don't be experimental (stupid) to the extent that I was. There are laws of physics that are not changed by even the grandest hubris.

Posted by Kirk Tuck, Photographer/Writer at 11:09

The orange gels didn't magically appear. Someone put them there because they were ordered too. If you ask questions, you will get answers.

"Since 1911, The International Alliance of Theatrical Stage Employees, Local 205, has been serving the Austin area as the labor union representing technicians, artisans and crafts persons in the entertainment industry, including live theatre, concert, and convention events."

This is where I'd start. Local 205 should have a person in charge of each venue.

I came to a similar conclusion regarding mirror less cameras a while ago. With a pair of GH4s in hand, I was ready to put my Nikons out to pasture. Pro bodies with 2.8 zooms are no fun to travel with. But, I struggled to move between video mode and photo mode quickly, and my photos were mediocre at best. Often, the EVF delay would cause me to miss the peak moment. Even on a commercial studio shoot with strobes and directing the talent (dancers), I struggled with my timing in a way I never encountered with an OVF.

So, the Nikons were brought back into the game to cover the photographic end of my jobs while the GH4s and A7s fill out the video duties. Now the GH4s are in the hot seat to prove their worth on the team, as they are no longer the hybrid tools I hoped they would be. My pendulum is swinging back towards purpose-built tools over jack-of-all-trades cameras (even as the SL looks very interesting). This doesn't diminish the benefits of having added capabilities - but my tendency lately has been to choose the best tool for the job. If my Nikons can shoot reasonable video or if I can squeeze out a decent photo from my A7s, fine, but that won't be the primary reason I'm putting them in the bag.

If you're not out the pushing the envelope, you're probably stagnating.

And if you're pushing the envelope, you're going to push too far sometimes. Occasional failures are an indicator that you're doing it right.

As a swimmer you probably know that if you're winning all the time, you need to find a better league, so you get your ass kicked now and then. It's the only way to get better and to stay good.

I note your comment about the use of flash with mirrorless. That's what I've found, also. As a newspaper photographer (Dinosaurs still walk the earth.) I don't like to mess with the available light, but sometimes it can't be helped. In an average-size room I'll try to find a spot in the corner to place an old Nikon SB-80dx with an el cheapo wireless trigger, and bounce the flash up into the corner. As long as I'm shooting raw the color isn't an issue. 1/8 power usually gives me f8 at ISO 800-1600. Hey, it works for me. And happy birthday!

Visited family in the San Francisco area earlier this week. I left my Canon dSLR's at home and used my Fuji XE2 to take some family portraits. It was frustrating. An EVF can be a real pain when shooting manually and using a TTL flash. I kept wondering why my portraits were under exposed even when I set the EV at 1.5 for my Fuji flash. When I finally wised up and shot the flash manually, it worked like a charm. Natural light portraits I shot of the family dogs worked out great with the EVF.