Walking around with a favorite camera and lens. Museum hopping with the Olympus EM5.2 and the Sigma 60mm f2.8 dn. 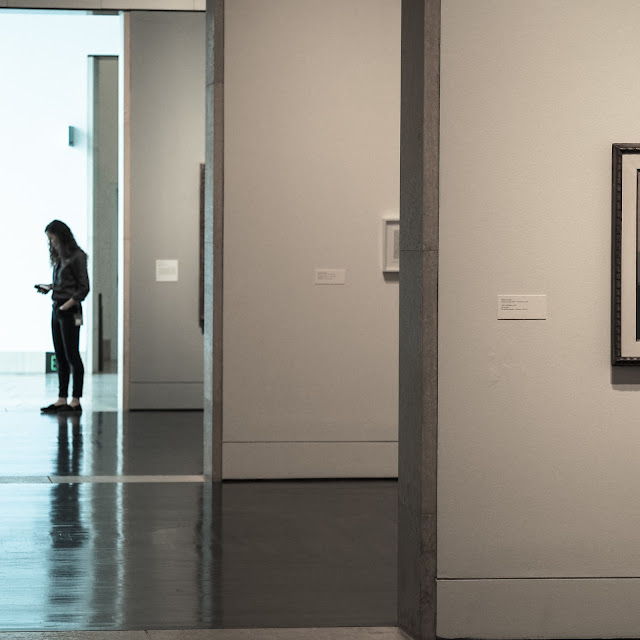 First there is a break in the work. By some marvel of diligence and happenstance you find that on this particular afternoon all of your obligations have been met and the new projects aren't scheduled to get underway until next week at the earliest. Then the stormy, wet weather abates for a few hours and a handful of delicate sun rays bounce around and entice you out of your safe and isolating office. You realize that it's Thursday and that admission is free at the Blanton Museum and, just down the road, admission is always free at the Humanities Research Center, on the UT campus.

Everyone has choices to make. Do you mow the grass? Do you head to some car care center to get your oil changed? Watch soap operas on TV? Navigate your way from website to website doing vital research on which camera has the fastest shut down time? Or maybe, just maybe you decide to go someplace and look at things that aren't part of your everyday circuit. I vote that I get up from my comfy seat, exit the chilled and quiet studio and actually go someplace. Yesterday it was to the Blanton Museum and beyond.

If you were going museum hopping what camera and lens would you take? I decided to take the Olympus EM-5.2 and the Sigma 60mm f2.8 dn lens. I thought it would be the perfect combination with which to shoot in those clean spaces and even more perfect a focal length if I chose to crop all of the images into little squares. In camera.

I love handling the EM-5.2 when I have it properly configured. The HLD-8 grip is pretty much mandatory. I bought the grip because I thought I would get a lot of use out of the headphone jack that's designed into the section that attaches directly to the camera. In reality the combination of both parts of the grip makes the whole unit fit nicely in my medium sized hands and spreads out the area that contacts my hands which in turn makes the buttons feel perfectly positioned. I've put HLD-8 grips on both of the cameras. It makes the feel of the cameras just right.

The added benefit of the grip is the addition of the second battery. Since the battery in the actual camera body is harder to get to when the grip pieces are used I've gone into the menu and asked the camera to "please use the battery in the grip first!" This means I can go through grip batteries, replacing them as necessary, for a long time before I have to deal with disassembling the whole melange and fiddling with the camera's battery.

The 60mm Sigma feels solid and the hood doesn't have a tendency to fall off so I usually stick the lens cap in my pocket when I start out my shooting sessions and leave it in my pocket until I get back in the car to go home.

While the camera is rugged and lightweight I've developed an psychological need to let the camera dangle from its conventional strap in a configuration that most of us would consider backwards. On most cameras I would let the machine dangle over my left shoulder with the eyepiece side or backside of the camera next to my lower torso or upper hip (depending on the length of the strap). But with the Olympus cameras I generally positioned them so that the lens faces inward instead.

I do this because I've found the rubber surround for the eyepiece to be a bit delicate and to have no scruples about falling off or being bumped off the camera. It doesn't sound like a big thing but you really would be amazed at how that little bit of rubber around the top and sides of the finder window changes the feel and handling of the camera when you bring it up to your eye.  I think Olympus should give each owner half a dozen eyepiece surrounds with each camera. That way the owners can see just how tenuous the connection between eyepiece cup and camera really is before they need to start spending their own cash on an endless stream of replacements.

When I'm heading into the museum spaces to make images I tend to use the lens at its wide open aperture, or close to it. In the case of the 60mm that's f2.8. Sometimes I'll get conservative and go all the way down to f4.0 but it's rare. I set the camera for aperture priority exposure and I use the auto-ISO. All of this allows me to shoot quickly when I feel I can depend on the camera's automation---which is most of the time. When the camera shows me a finder image that's too light or too dark in the EVF I can quickly and handily use the front dial (which feels luxurious) to dial in a more accurate exposure compensation.

I regard the Olympus EM5.2 as the perfect museum camera because the shutter is quiet and has a very nice sonic profile. The combination of the small, non-intimidating size and the gentle noise of the shutter activation makes the system generally welcome in quiet areas.

The one thing I think that spoils EM5-2 users the most is the almost magical image stabilization. It's hard to go backward once you've gotten a good taste of just how effectively the camera can remediate the effects of over-caffeine-izaton of the user. Most of the interior images I am showing here were shot handheld at around 1/15th of a second. I've gone slower and gotten good results but I just didn't feel like showing off yesterday. 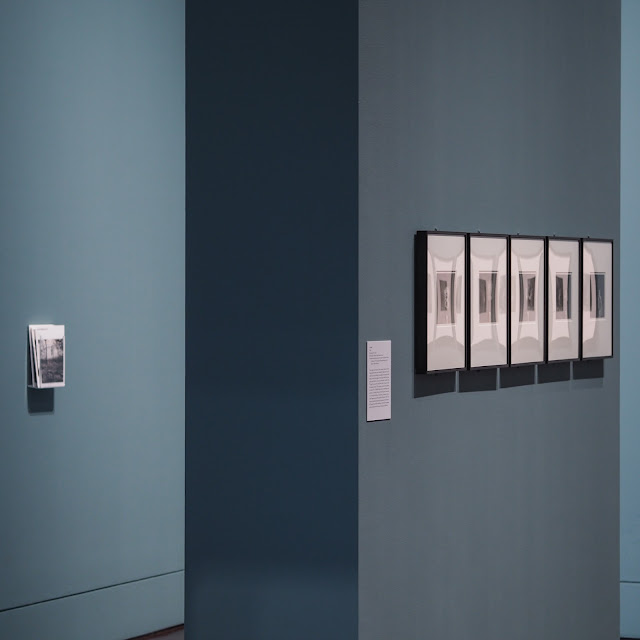 I started off at the Bob Bullock Texas State History Museum but truthfully, I just stepped in to use their restroom on the second floor. It's very nice and always spotless. The museum was setting up the atrium for some sort of big gala so I hurried along and headed across the street to the Blanton Museum. Last month I saw an incredible show there wrapped around the subject of the civil rights movement in the U.S.A. in the 1960's. I would have liked to see the show again but I missed it by a week.

I concentrated on looking for gems among the permanent collection and some of the smaller, temporary exhibits on the second floor. Still loving the exhibit: Wild and Strange: the Photographs of Ralph Eugene Meatyard, which are on loan from the enormous collection of photographs at the HRC. I saw the show a few weeks ago and it's reminded me how wonderful smaller, more accessible black and white prints could be. There's a photograph of the installation, just above. 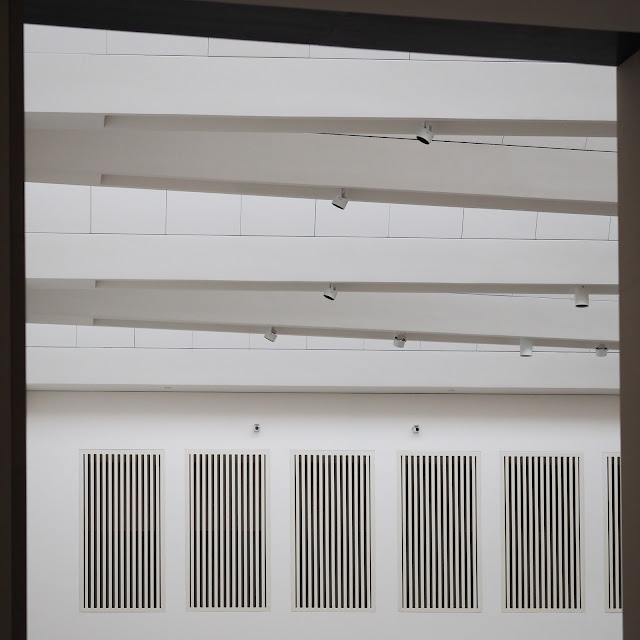 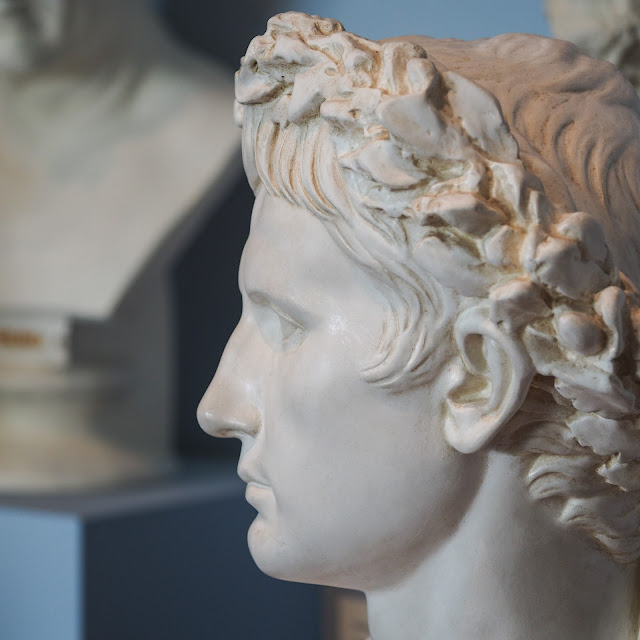 When visiting the Blanton I always try to do one nice image of the Battle Collection of
Sculpture casts. I like the intersection of the profile and the soft blue, just above.
The 60mm seemed perfect for this kind of spatial compression. 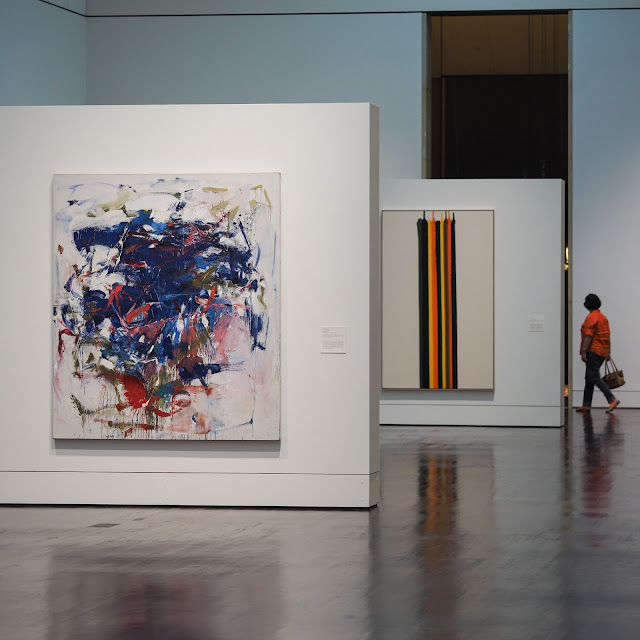 The photograph above and the one below really do show just how well corrected
the Sigma 60mm f2.8 dn lens is. The images are filled with parallel lines that do a
great job of staying straight and true. It's really a nice performance for an
inexpensive lens used at its widest f-stop. 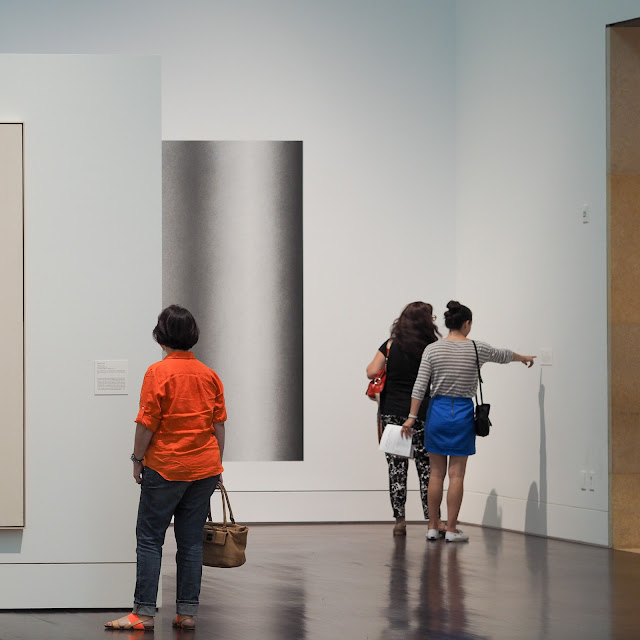 I left the Blanton galleries and went across the courtyard to the little museum café to get a pre-made ham and swiss cheese sandwich before soldiering on to the Humanities Research Center a few blocks away. I'd been hearing about the Alice in Wonderland show and wanted to see it. There were a number of really great images from the second half of the 1800's and the show laid out an interesting progression of re-interpretations on a 150 year time line. Below is one of Lewis Carroll's notebooks. I particularly like the last passage on the page... 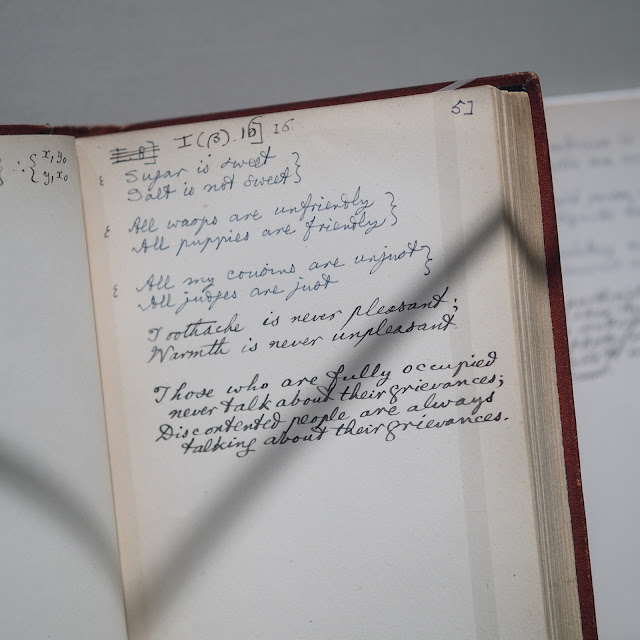 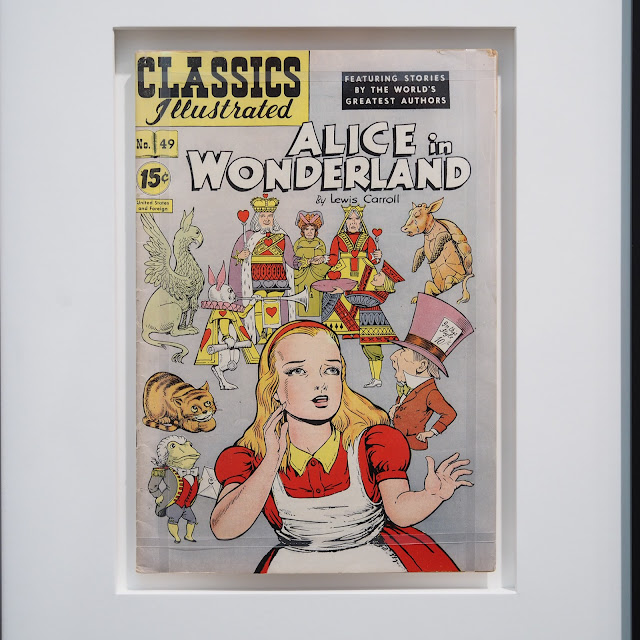 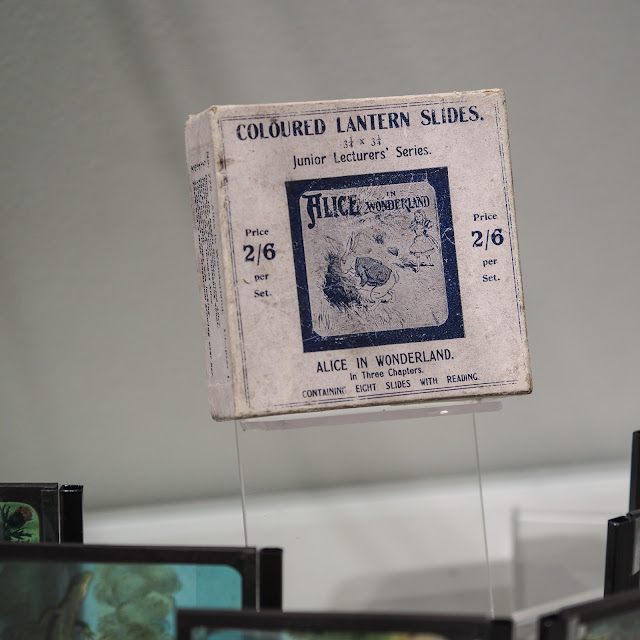 I think the Alice in Wonderland show is fun for art buffs as there are lots of very interesting materials, across media, that I was surprised to discover. My favorites were a series of comic book covers featuring Alice, and also a series of illustrations done by Salvador Dali for a unique edition of an Alice in Wonderland book. Those surrealist illustrations alone are worth getting out and seeing the show...

I know we're all jaded about what cameras can do these days but the comic book cover and lantern slide box, just above, still amaze me in terms of how well stabilized the frames were and how perfectly rendered the details are from a camera handheld at ridiculously slow shutter speeds. And that's why I grab the Olympus stuff when I go out to shoot for fun.

Oh, and by the way, these are Jpegs from the camera...small exposure tweaks, that's all.

Posted by Kirk, Photographer/Writer at 17:55 7 comments: