Colors in layers. A sad painting at the Graffiti Wall. 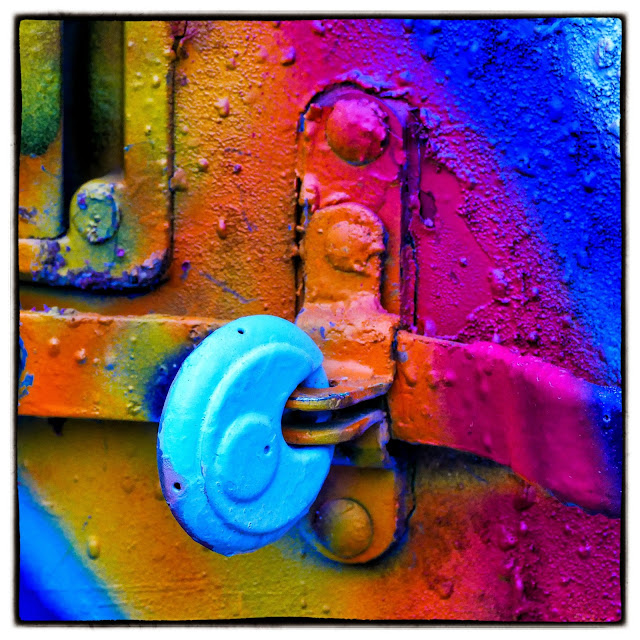 I was depressed on Saturday when I heard about the attacks and deaths in Paris. I watched the news and looked at the stories on Google but it was too much to absorb all at once. It looked like it would rain outside and the day was getting on but I decided to pick up a camera and go out for a walk. I was curious to see what people were up to at the Graffiti Wall near Lamar Blvd.

The sky was dark gray and every few minutes I'd feel drops of rain. The "Wall" was filled with people. They were there to take photographs of themselves, their friends and their families, in front of a new painting that had just gone up that morning. It was a giant French flag with the Eiffel Tower/Peace Symbol on it.

I took some photographs. More to document the moment in time than to make any sort of art. I just felt, at the moment, that it would be good to have an image to remember.

Here's the straightforward photograph I ended up making:

I cropped out the people in the front and the color confusion at the top of the frame.

After I shot different angles and different groups of people the rain decided to fall less intermittently, and more emphatically, and I took off my cap and covered my (non-water resistant) camera preparing to walk the quarter mile of so back to my car.

As I was leaving the park I noticed the riot of colors represented in the top photograph and pulled the camera out for a moment to capture the saturated mess. It seemed like a nonsensical counterpoint to the heavy implications of the photo I had originally come to take. It's an awkward balance.