A Working Wednesday with two different camera systems. And finally, some sunshine... 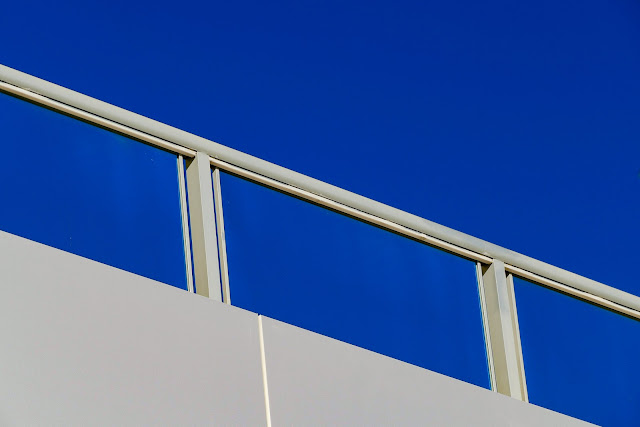 All images here today are from the Panasonic fz 1000, taken for my downtown art project.

It was early this morning when I dragged myself out of bed, microwaved a sausage, Gouda cheese and egg breakfast taco, fired up a double cup of coffee to go in the Keurig, and hit the road. I'd loaded up the CRV yesterday evening and all that was left was to drag the camera bag out to the car and head the car in the right direction.

I hit Johnson City at 8:15 and headed to the LCRA Park to meet up with a bunch of people from my favorite electric utility company for some photographic fun. We arranged 13 Kubota all terrain vehicles in an attractive, modified chevron pattern with the Pedernales River in the near background, and then the Hill Country in the far background. Each Kubota vehicle had an lineman standing next to it, in the company uniform, wearing shiny, new hard hats.

We photographed from ground level and it was good. But we had more resources available in the form of two, large bucket trucks. These are trucks with boom arms that allow one to rise to any occasion; up to about 50 feet in the air. We directed one bucket truck into the area behind our formation of ATVs but in front of the river. We positioned the other one just behind the point at which I had set up my tripod. One of the linemen handed me a harness and a hard hat and I climbed up on the truck and into the bucket. A few seconds later my Nikon and I were about forty feet above the ground, shouting  directions down to our art director and getting everyone positioned for a shot that encompassed a lot of space and a lot of detail.

For this morning's shoot I felt that using the Nikon D810 was an obvious camera choice. The sharp, detailed files it is capable of creating are perfectly suited to a wide shot with 14 vehicles and 13 different people scattered across a fairly big field. It also helped that, at ISO 64, the dynamic range of the sensor is pretty much unmatched by other cameras in the same price range. I paired the D810 with the sometimes maligned, sometimes praised, Nikon 24-120mm f4.0 lens.

While some find that the lens has too much distortion; especially at the short end, the reality is that the lens is very sharp and there were no obvious straight lines when looking down at a landscape of yuccas, scrub brush and a meandering river. The main attribute I was looking for in a situation like this one was sharpness/resolution, followed by focal length flexibility. Lack of geometric distortion wasn't even on my radar.

With the camera set to an optimum ISO and the lens set to an optimum aperture the only thing that remained on my check list was to toss as much fill light as I could into the front vehicles and the men standing next to them. The sun was coming in at a 45 degree angle from one side. I placed an Elinchrom flash head with a 42 inch silver umbrella at the camera position and turned the power all the way up. All 1100 watt seconds. But since the umbrella and light were easily thirty feet or more to the closest subject the effect was barely noticeable. I would be depending on accurate exposure and the combined power of the camera sensor's great dynamic range, and the power of the shadow slider in Adobe Camera Raw, to pull up detail on the shadow sides of the ATVs and the men who drive them.

I worked around f8.0 and f11 as my preferred apertures to get the depth of field I would need as well as the optimum performance from the lens. Being used to working with EVF enabled cameras made me miss the LCD loupe I neglected to bring along. I had to use my black baseball cap as a light blocker so I could see what was on the rear screen more clearly. I used the histogram as my crutch of last resort. But I needn't have worried as the images matched the metered value given by my Sekonic incident light meter.

After we wrapped the Johnson City shoot we paused first for breakfast tacos (from a local place called, Charro's. Very, very good) and then we paused at the office of the client so I could download 17 gigabytes of very juicy raw files to her company's server. The client will be doing the post production on the files for this project. It's a rare thing for me to let go of but I trust the client and it was the only way to make the budget work for everyone.

With the car packed and a fresh cup of coffee in the central cup holder I tuned into NPR on the radio and headed back to Austin. When I got home I downloaded the files onto my system ( you can never be too careful...) and put the Nikon camera battery on the charger. 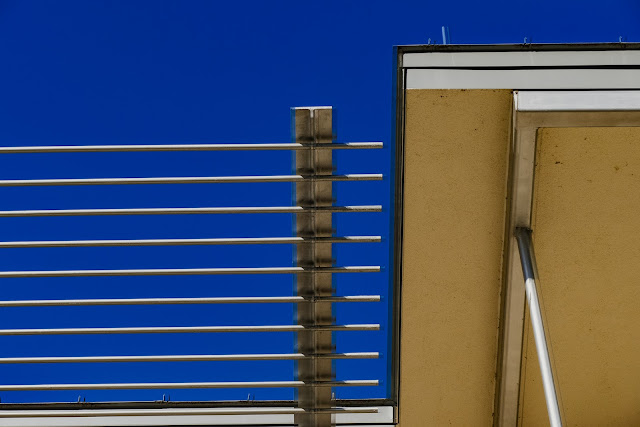 I swung by the house to make a peanut butter and jelly sandwich and have a big glass of milk. I unloaded the car, grabbed a new camera and headed for downtown. You see, I've been waiting to shoot a second project that I think is crazy good fun, but it is a project that depends on nice, clean skies to work the way I envisioned it. I've educated the client and agency about the need to patiently wait for the light to get neat, and the way I figured it I had about 2.5 hours of excellent sunlight of which to take advantage before I could switch everything off and head out for Mexican food and a local IPA ale.

I'd spent the morning shooting "big" and traditional so I was ready to switch gears and embrace smaller and more modern. Almost jet age. A camera with a great EVF. The Panasonic fz 1000.
I shoved a couple extra batteries in my pocket, put a polarizing filter on the front of the lens and headed over to the wedge of Zilker Park that butts up to the south side of the Pfluger Pedestrian Bridge. There's a little parking lot there that's free and, if you get there on a weekday before school and work let out, there's almost a 50-50 chance of getting a space. Today the parking gods were benevolent and ushered me in to a prime space.

I spent the rest of the illuminated afternoon walking around shooting interesting shots that may or may not end up, in rotation, on my adventurous client's website. Large. Across the screen.

I generally set the camera to ISO 125 and shoot in the Aperture priority mode. The dial on the back of the fz 1000 has a push button incorporated. It's how one switches between setting the aperture and setting the exposure compensation with the same dial. I was mostly shooting raw but every once in a while I'd find something that would look better with a more extended range to the highlights and shadows and I would engage the in-camera HDR. I usually set the HDR app to give me a three stop spread and that better be enough because, on this camera, you only get the choice of 2 and 3 stops and I always err on the bountiful side. 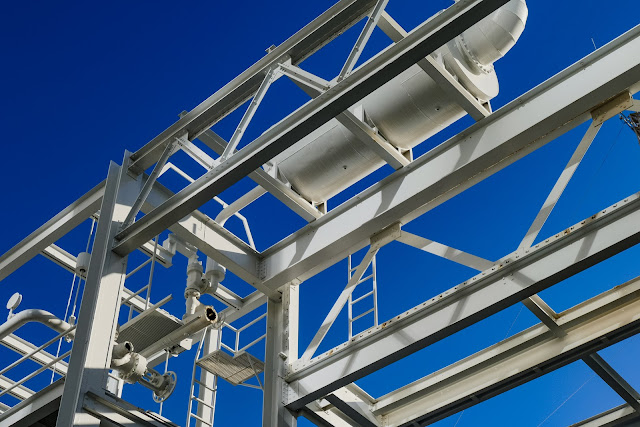 It's harder to feel loose and unrestricted when you realize that your photo walk has the prospect of money-in-exchange for performance aspect to it. Suddenly the kinds of images I usually see on a downtown walk become more important (and seemingly more scarce) to come by.  For the most part the built in HDR works well with landscapes and building-scapes.

By the end of the day I'd been moving from 7 to 6:30 pm and I was ready to call it over. I'd found some new angles in the old town and I was feeling as though the Panasonic camera and I had really bonded. The Nikon D810 has better looking files, technically, for sure. But the Panasonic is super fun and tremendously easy to use as a "sketch book" style camera.  A fast shooting and stable platform from which to go out and blaze away at everything that catches my eyes. 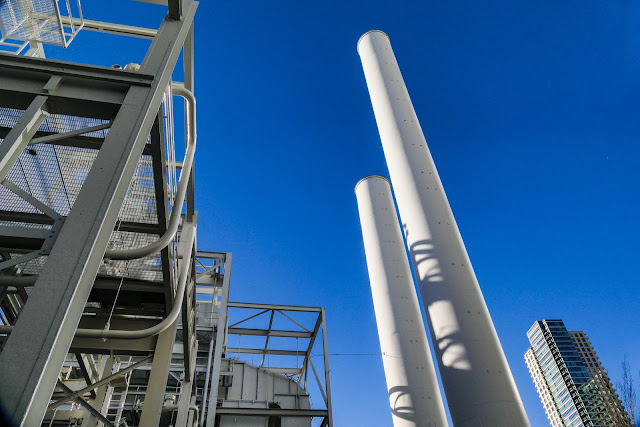 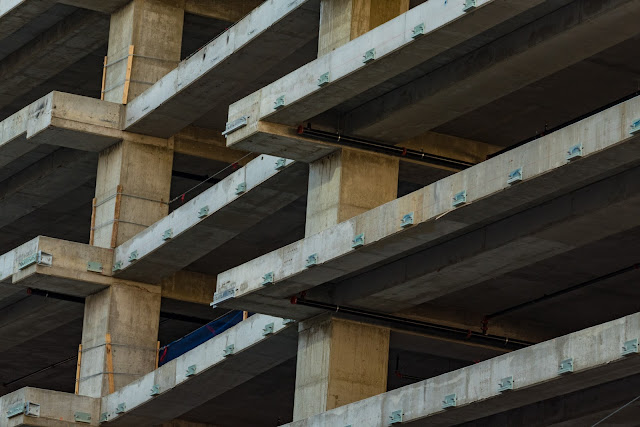 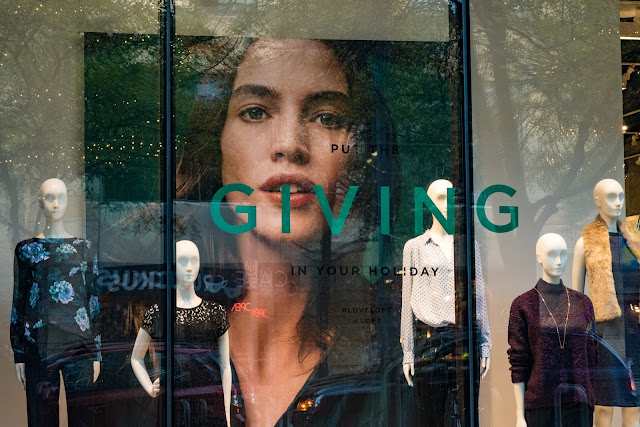 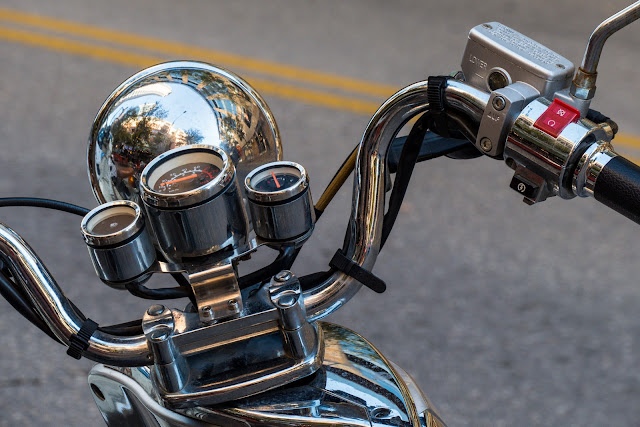 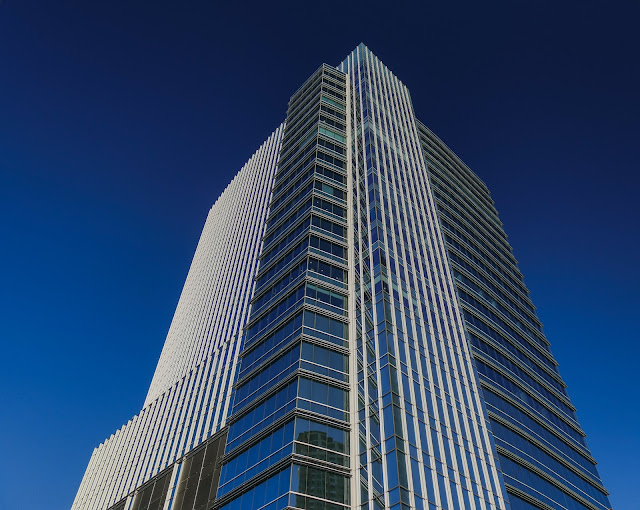 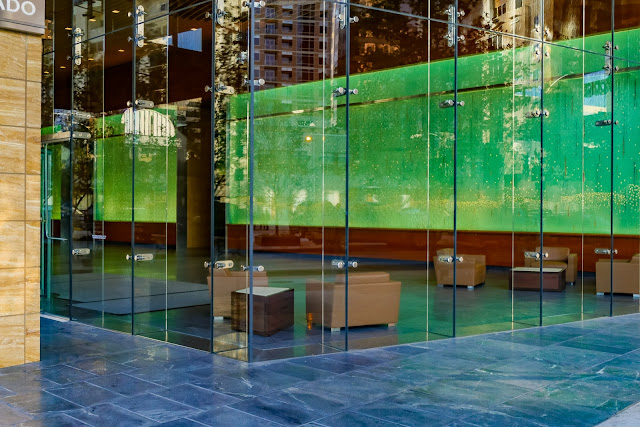 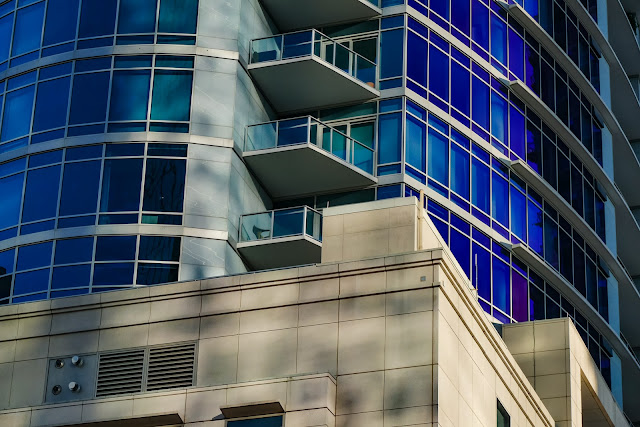 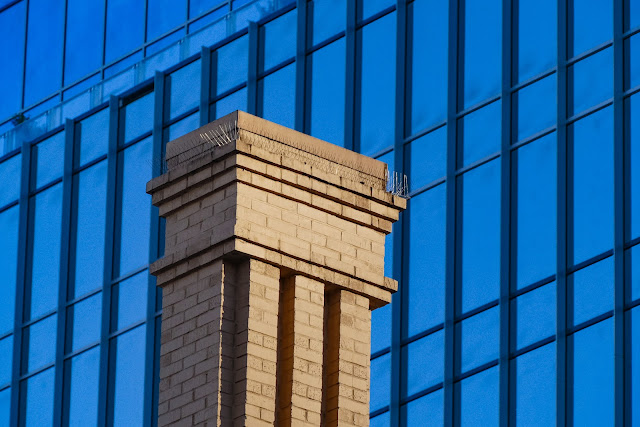 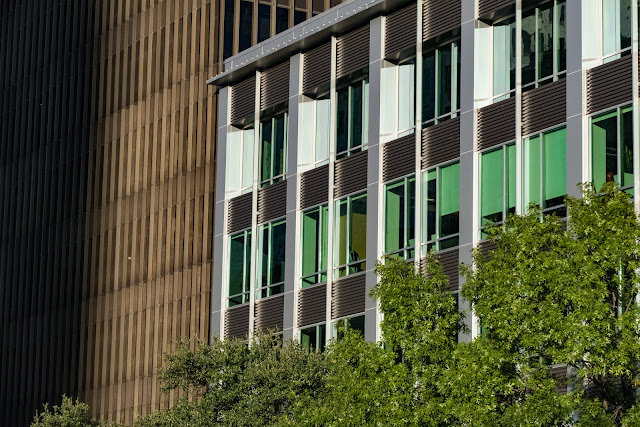 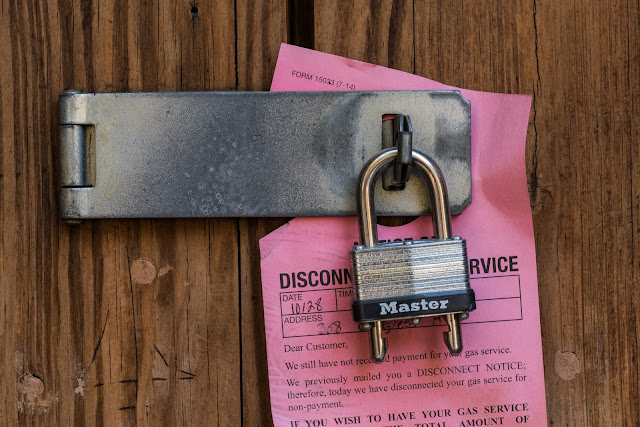 In the end I made a handful of good images this afternoon. I'll keep banging away at it until my client looses patience with me --- or until I need to get a check to cover some silly expense or another. The day is supposed to be sun filled and magnificent tomorrow and I'll try to shoot for more hours between a location scouting meeting in the late morning and a gala shoot starting at 6pm.

Tomorrow will be the flip of today where cameras are concerned. I'll shoot with the Panasonic for the exterior building project for most of the day. I'll give it two batteries worth while working around the scouting meeting. Then I need to get home, change into a dark suit with a loud tie, and get over to the Four Seasons Hotel for the annual fund raiser for Texas Appleseed, a charitable organization that matches pro bono work from major law firms who work to provide social justice. In our state they have been taking on the Juvenile justice system and, most recently, payday loans. I like their work and more importantly they get results.

The photographic requirements of this job call for many "grip and grin" images of attorneys and their spouses hanging out with other attorneys and their spouses, as well as documenting the speeches, the giving of awards, and the giving of more speeches. There will be the typical, elegant, Four Seasons dinner and ample open bars. I'll be pressing the fast focusing D750 and the 24-120mm lens into play, along with a TTL flash from Nikon or Metz. The real secret to success in these situations has very little to do with gear and everything to do with how confident you are, how fast you can work and how authoritatively you are able to move people into small groups and get them to face the camera and have everyone in the group flash you a winning smile at the same time.

I'll put some sort of little bounce card on the flash to soften its light but mostly the evening's toil will swirl around establishing a nice rapport with many of the same people I've seen at these events since the early part of the century. That, and not over thinking the whole thing. It's sometimes very important to know how to stay out of one's own way.

That's the long and short of it. Hope you are having fun with your projects.

Posted by Kirk, Photographer/Writer at 22:40 4 comments: