Assistant standing in so I can see how the out of focus background looks. Cool. 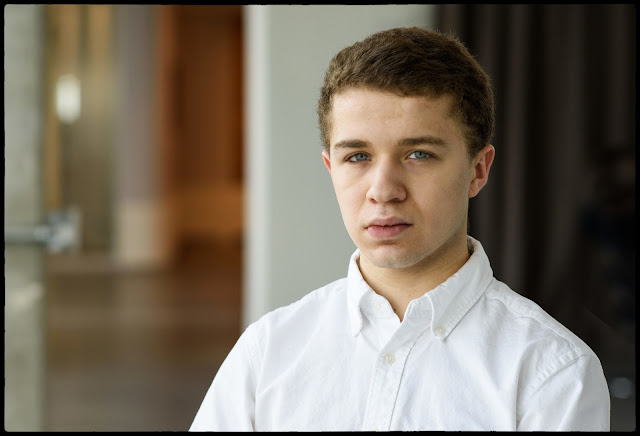 I don't spend as much time as I should here talking about style. Style is the photographic manifestation of your unique vision. Or, at least it should be. I've been working on my portrait style for executive portraits for about a year. Much of it surrounds giving the photograph a suggestion of authenticity by visually implying that the image is "available light," and for the most part the construction of the images does depend on an available light source.

Ben and I went on location last week to make portraits for a client who likes this style. As with any job we got to our shooting spot about an hour before our first executive was slated to arrive. There is a floor to ceiling window that extends along the wall to the left of Ben at least 50 feet. The first thing I do is to look at the light mix to see what needs to be changed. In this case there are lights that hang down to about 12 feet from the 15 foot ceiling. These are strong compact fluorescent or high density LED light sources. Tests show me that they are much greener and more yellow than the light that's coming through the windows. While the window light is stronger overall the hanging lights cause color casts in hair (or on bald heads) and on the tops of jackets or the parts of the face on which that light strikes. Once you have a mix of two different light sources in an image your ability to color correct convincingly is much diminished and you'll spend a lot of time doing spot color retouching.

We use circular, pop-up reflectors with black and silver sides to kill the overhead lights (which invariably are on switches that effect large areas of the workspace and cannot be turned off during work hours...). The reflectors are used on arms and "float" between the subject and the lights. I use the black side toward the light to kill as much of the artificial light as possible and the silver side toward the subject to reflect and enhance the natural light.

Behind the camera position I use a very large, white umbrella with either a small flash or an LED fixture pointing into it so I can add front fill light to control ratios. The fill light is usually tiny. Infinitesimal. Subtle. Vague.

I also use a subtractive panel over to the right of Ben to pull some light from the side, and sources just behind Ben, down. Finally, in a situation where a subject comes to me in a white shirt I'll grab a net on a frame to pull down the exposure on his right shoulder (closest to the light) so the cotton broadcloth doesn't burn out beyond 250 in a histogram. I want to be able to recover real detail.

I have two favorite lenses to use in shooting this style and, to some extent, the one I use depends on how "intimate" I want the portrait to feel. For a very close portrait I'll use the 135mm and for the version with a little "air" around it I'll use the 105mm. I've been using both of the lenses at f4.0 lately because I don't want to go over the top on the whole out of focus look. I want more than eyelashes and nose hairs in sharp focus. But, used close in like this at f4.0 both lenses do a good job rendering the background nicely out of focus and with commendable bokeh (the quality of the out of focus area image).

This is just a test so I didn't work very hard on the most important part of the portrait process; my rapport with my subject. That's why Ben looks very serious and borderline mean. I don't blame him, I had just sent him to the car which was in the parking garage to fetch a piece of gear that I then decided not to use. And I made him "stand in" for a long, long time while I fussed around with live view.

Our executive arrived one half hour earlier than scheduled. That's okay. We were ready and tested. The subject was in and gone in ten minutes; not because he was temporally demanding but because we were tested, set and ready. He was easy going and genuinely good natured and we were able to work together to get some great frames quickly.

In a way it is sad. The set up and tear down always seems to take much longer than the actual "hands on camera" time these days. It just goes with the territory.

Discounting the expression of my subject (above) what do you think of this portrait style?
Posted by Kirk, Photographer/Writer at 16:37

Krik, generally like it. the light fall off is nice from left to right. Good hair separation. I wonder if there couldn't be a bit more "pop" from the eyes?

It looks clean. It looks modern.

The lack of catch lights is a tell that this isn't your usual Professional Portrait.

So you're kind of walking a line here. Since you're not hammering the Pro Portrait tropes it's not instantly obvious that it's not just a lucky iPhone snap. It does feel to me that it's 'obvious' that it isn't, but as a photographer I'm noticing things.

That said, I am buying it as fully professional looking, whatever that means, on the basis of how you've dealt with the light. Ample modeling, but the tonal range is all there. Nothing is lost at either end.

I like the look. It's a jacket and a good shirt, no tie. Casual yet refined.

Beautiful timeless color balance. The lighting is natural and fantastic. I like your focus fall-off too- I appreciate you making it smooth and subtle.

For me, the background could be more balanced. The vertical elements break the visual flow. I find the big white beam next to the dark curtain distracting. My eye goes right to the beam.

Sorry Kirk- I just posted a comment under my son's login, didn't realize he'd logged into Google in my computer.

Thanks for the tips on aperture.
It's one of the hardest things to get right for this kind of portrait.
F4 seems to give it a little bit more focus fall-off than the F5.6 which I tend to use with short to mid-teles. But I use slightly different lenses in m4/3, so things could never be the same anyway.
If anything - for my specific taste - I'd reduce the small shade below the bottom lip. It makes Ben's thick lips stand out even more, making it look like he's pouting (which he very likely is! I know my Sam would! :) )

I like it -- nice subject separation, yet it still feels like an environmental portrait. My first impression was that Ben's eyes were muddy and needed more pop, but when I clicked to view the larger size, they looked fine. May be one of those digital things, or something Blogger does to the photo.

My personal preference in portraiture leans more towards a darker feel in the lighting, not to imply that I only shoot that way, but it is the look I personally like. I understand that is not the look you needed or wanted for these clients and in light of that, no pun intended, I think it works well. Of course as you mentioned the interaction is the most important ingredient and you know maybe you did get that interaction with Ben!

The light on Ben is great... The "problems" I have are the bright vertical beam in the background, particularly with the combination of Ben's light colored shirt. The combination draws me away from Ben's face, which despite the expression is still the most important element.

That is a really interesting remark, RayC, and something I had not picked up on.

The basic way (hammered into my head by Adam Marelli) to define a subject is to stick a light subject on a dark background, or vice verse. I notice in this test shot the lighter half of the face is placed on a light background, and the shadowed side is placed against the darker background. This has the effect of softening the entire effect and making, to my eye, the whole thing feel, um, airy, let's say.

The placement is too precise to be accidental, I think?

It's a pleasure to note that good set-up light control can appear to be very fortunate available light.