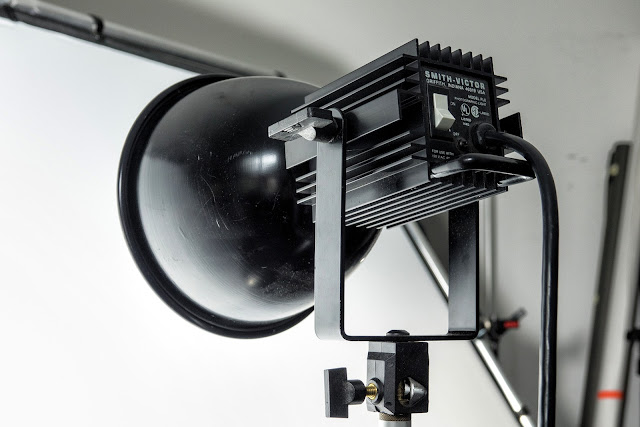 Most photographers probably have a fixture like this sitting around the studio.
It's probably in a corner and the last time you used it was with a photo flood bulb
that turned smokey black on the inside after a couple hours of use. The
fixture probably burned your hand and you haven't used it since.
I found a new use for mine. It's called, "LED bulb."

Yesterday afternoon I was at Precision Camera, looking for a short, coiled XLR, male to female cable. I wanted a one foot, coiled cable that I could use to connect a microphone on top camera to the little mixer box bolted below the camera. Yes. They have one in stock. So I made that purchase and then, since the weather was bad and I'd driven such a long way, I decided to do a quick loop around the store to see what might be new. I played for a while with one of the new, Hasselblad, mirrorless medium format cameras, and I spent some quality time with a dedicated video camera I'm considering buying for an upcoming project. I played (for the fifth time...) with a Fuji X-Pro-2 but just couldn't summon up the right buying impulse. Too much cash to be spending on myself just before the holidays.

But I did come across something very interesting on one of the less visited shelves, hidden in the valley of shelves which is the in-store district of camera bags, soft boxes, pop-up reflectors, Pelican cases and all the other stuff that isn't cameras and lenses. What I found was a bunch of boxes from Pro/master that were labeled "LED Lamp." There were several sizes and, of course, I was interested in the max output. I asked my favorite sales associate his thoughts about the product.

"It's a high output LED bulb that fits into a standard household socket. It's really bright! But I'm not sure how color correct it is..." He said. He had me at "really bright." I bought one for the princely sum of $39.95.

A few things to know about this product. If you want a bright LED source to shoot stills with and you're buying your coffee at McDonalds because the $1 price special is very, very meaningful to you, then this might be the best product out there to give you a lot of relatively clean light for a cheap price. You'll have to add the fixture but you can always buy a clamp light fixture at a hardware store for less than $10. The LED bulb is a 50 watt unit and it puts out at least as much power at the RPS CooLED 50 watt SMD unit I've been using for the last year. The big, white part behind the bulb itself is the self contained ballast and it IS fan cooled. The fan is louder than the fans in my RPS lights so I wouldn't recommend using it to record video with sound in a small, quiet room. But if your usage is for regular photography then you're set. The bulb sits very forward in most fixtures because of the length of the ballast and fan assembly but the dome on the front does a good job of diffusing the light and spreading it around. For critical containment of light spill I'll just grab some Black Wrap(tm) and fashion my own flexible barn doors for it.

The unit gets warm to the touch on the front of the bulb and hot to touch on the ballast as it operates. Wait a few minutes for it to cool down before removing. 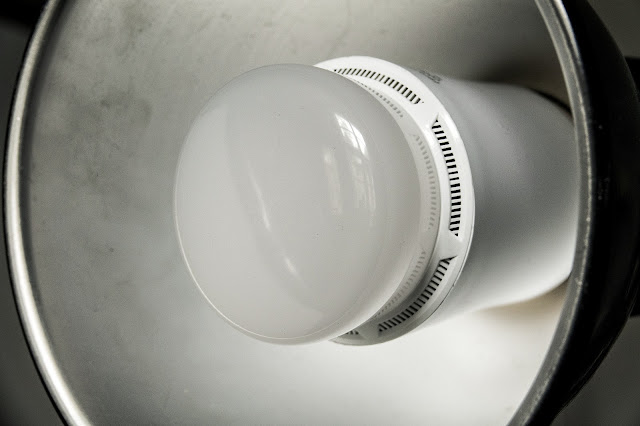 The business end of the bulb. See the vents for the forced cooling?
Amazon product link.... 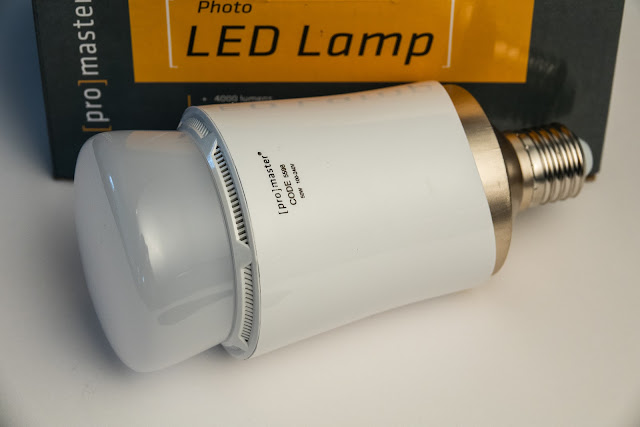 Here's one angle of the project. 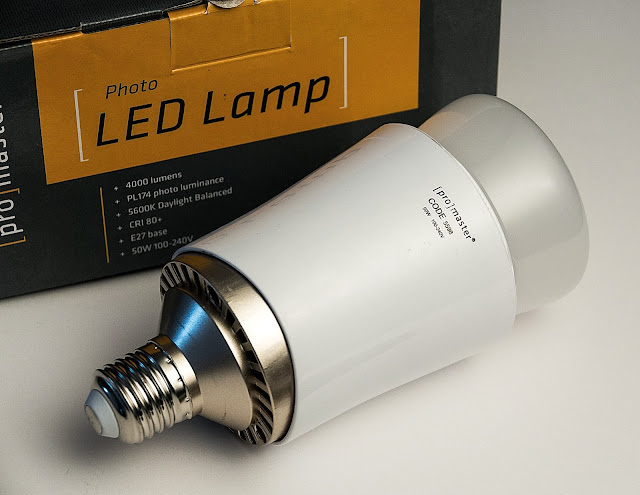 I did a quick color test using the VSL "Camera of the year!!!!!" the Sony RX10iii. I set the camera to the daylight setting on the color presets and shot a raw file of the product box on a white piece of bristol board. You can see that it's about 7 points green, overall. Not a huge green spike but big enough to require correction, if you are interested in neutral color... 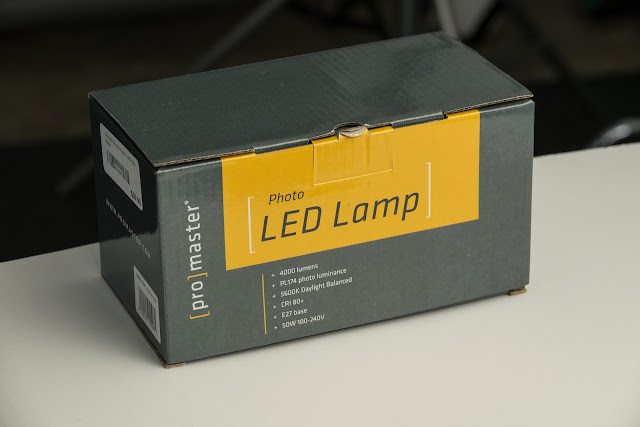 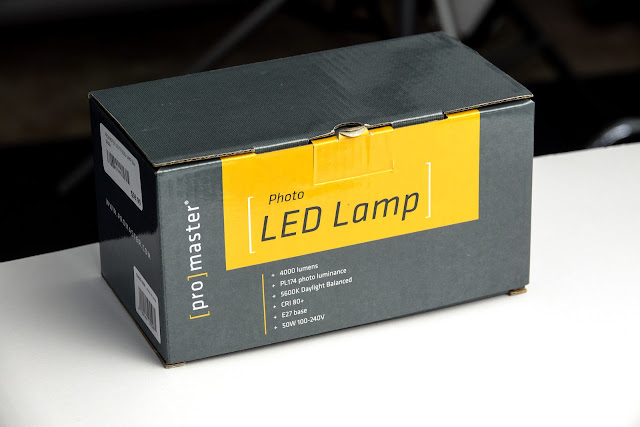 These LED lamps are pretty interesting. Five years ago we'd have paid a lot more to get a lot less. What am I saying? We did that...  Now were able to get the equivalent of a 250-300 watt tungsten bulb in a form that's much cooler and more energy efficient, comes it at 5400K and is highly color correctable. For the price of a cheap fixture and the lamp. I put mine in the Smith Victor fixture that's lived in my equipment closet for 20 years and now I have another LED light to use around the studio. Right now I'm using it through a 3 x 6 foot, Lastolite aluminum frame with a 1.25 stop diffusion scrim. It looks beautiful. I like it.  I bought mine at Precision-Camera.com but you can also get them from Amazon.com. Budget lighting at its best!

Posted by Kirk Tuck, Photographer/Writer at 12:23

Thanks for the tip on the LED lamp. I have 3 old Photoflood reflector lights I can use them in.

I can feel the need to buy myself a Christmas present :)
Great idea and a local camera where I live happens to stock Promaster - I'll have to drop in and ask them

How does the output of these compare to the inexpensive flat panels?

Thanks -- you had me at the $1 coffee mention. Plus, I didn't know about Black Wrap. When you use it do you have to make use of their branded tape for heat resistance? Or will the adhesive in other tape hold your Black Wrap modifier in place without sagging, slipping, or making a hard-to-remove mess?

So, Black Wrap is just heavy duty black aluminum foil. I usually attach it to LED fixtures with wooden clothespins. Just clipped to the edge of a reflector. No need for heat resistance with the LEDs. Not like the "instant smoke" days of tungsten lighting....

Edward, the light output is greater than the 1,000 bulb LED panels I started with when I wrote my book on LED Lighting (still available on Amazon...). The well collimated, single light source is very efficient. Pretty eye opening for a $39 lamp. Remember, there is fan noise...