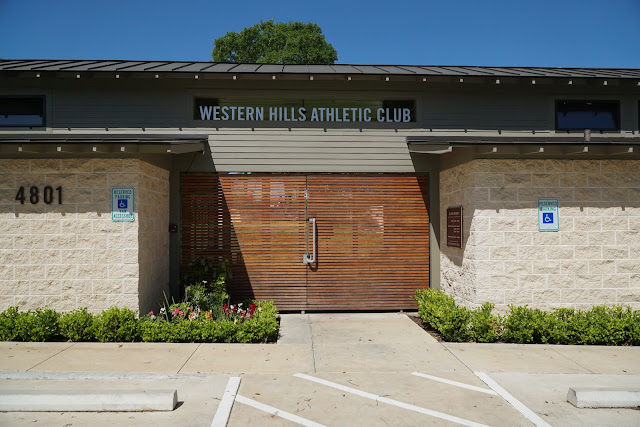 Front door to the pool.

After I bought the little Sony a6000 I upgraded the firmware and then started researching lenses. I really have no intention of making a very deep dive into Sony's E system but I wanted a good, all around, walking around, all terrain lens. Something I could keep on the camera for all the times I'm not shooting old Nikon lenses, or even older Olympus Pen-F lenses, with adapters.

I would have loved to have purchased some exotic Zeiss lens. If I couldn't find an E mount Otus 12-120mm f1.4 zoom I would have enjoyed shooting with the Zeiss 16-70mm just fine. But, like almost everyone else, I do have to operate with some budget constraints. Boy in a private college, property taxes soaring quicker than my income, that sort of thing. So I looked for a good compromise. I remember some basic math from my days in electrical engineering school at UT Austin and I ran the numbers; realized that $600 is less than $1000 by a lot percent, and decided I might be able to be happy with the Sony 18-105mm f4.0 G lens. After all, it's a servo zoom and has an extra switch on the side that the Zeiss dream lenses do not.

My preliminary research pulled up formal lens reviews from the early days of this lens's appearance. I read that the corners (especially at 18mm and thereabouts) were not "critically" sharp and that the lens has some distortion. Imagine that! a 6x zoom with distortion. After I got confused by the melange of conflicting opinions from the professional testers I defaulted to the user reviews on Amazon.com which led me to believe that, while not in the stellar, once-in-a-lifetime, high performance category of lenses, this one made the majority of people who bought it with their own money pretty happy. Four or five star happy. I'm of the opinion that older technical reviews aren't always a good indication of the state-of-the-product as it exists two or three years later. I think conscientious lens makers probably go back and tweak stuff over time; especially based on user reviews. I found that this lens's performance was closer to what I was reading in user reviews and much less odious that what I had been led to believe by the reviewing "savants" of our industry.

The lens is simple. The only external switch is for a servo zoom. That's a motorized zoom that is also endowed with variable zoom rates; depending on how precisely you can push the button. There is no I.S. on or off switch, no manual/autofocus switch and, of course, no aperture ring. There are two rotating rings near the front of the lens. The one closest to the camera body is the zoom ring, which duplicates the work of the servo toggle (the lens is zoom by wire and focus by wire). The forward ring is the focusing ring. In manual focus and DMF you can grab that ring and control focus. There's not much resistance but I found it easy to get used to after only a couple days of playing.

The lens is long and gets wider at the front end, culminating in a 72mm filter size. It comes with a fairly big, tulip lens shade. While it looks big the lens is actually quite lightweight and rides around on the camera without making a big deal of its presence. Just be prepared though; the lens is much bigger than the a6000 camera body itself. 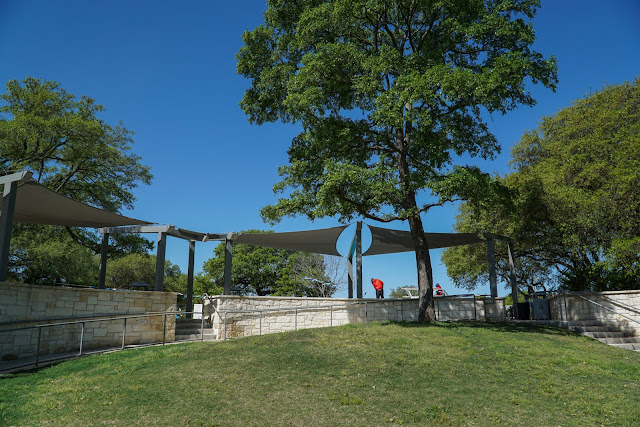 Heading up to the pool from the locker rooms.
Not as much distortion as you might think;
the rock wall is circular....

I'm not going to go into depth in this article with an exacting analysis of the lens's f-stop by f-stop performance. I'm just going to say that I used the wide angle settings and I can blow up the image above and see clearly defined and well reproduced leaves on all the trees (even the ones on the edges). I shot this image at f6.3 and think the vignetting is well under control, the sharpness quite good and the general image quality more than acceptable for my work.

I shot wide open at the wide end and wide open at the telephoto end, and at random settings in between. I notice that, wide open, and with light bouncing around everywhere, the f4.0 aperture can give an overall image that's slightly veiled by overall flare but this is gone by the time you get to one stop down. This means it's probably not the optimum lens for shooting directly into the sun.... 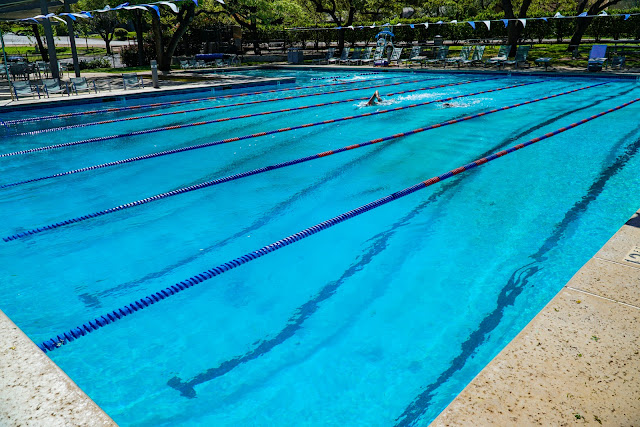 From the deep end of the pool, an hour before the noon workout on Friday.
So crowded. But I guess the 75 degree weather was keeping people away.
Fortunately the pool is heated to 80f.

Some nice things to know if you are considering this lens is the fact that it's all internal focusing and doesn't change lengths as you zoom or focus. The focus is absolutely silent, and, in good light, very fast and accurate. Since there is no distance scale, and the lens resets itself to the wide angle setting if you turn off the camera, you probably won't be using the lens to zone focus in the manual focus setting mode. That's okay with me. I have other lenses sitting around for the times when I want to play street photographer with an "old school" methodology.

The lens seems exactly designed to be a good, basic videography lens; something you might get a lot of use out of on an FS5 or FS7 camera. And, even in a 4K mode, the lens out resolves the format by a factor of a zillion. It should make for crisp video. With very few exceptions I am happy with the images I get out of the lens wide open. That bodes well for its overall performance. 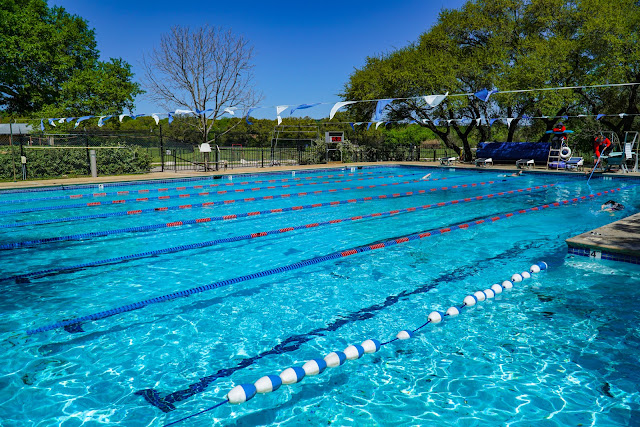 From the shallow end of the pool. The clear, blue sky can get a bit monotonous during
long swims. It would be nice if we could get a smattering of puffy white clouds --- at least during
swim practice ---. You know, just to break up all that infinite blue...

So, this lens is the Sony E counterpart to Nikon's 24-120mmf4.0 and Canon's venerable 25-105mm f4.0. It's not as wide as those two at its widest setting (approx. 27.5 in full-frame speak) but it extends the angle of view out a bit further on the telephoto end to give you the equivalent of a 157.5 mm. Not bad at f4.0. The lens also offers image stabilization but I have no real way of measuring the efficacy of Sony's implementation. It's good but it's not in the Olympus OMD EM5.2 ballpark. Just not. 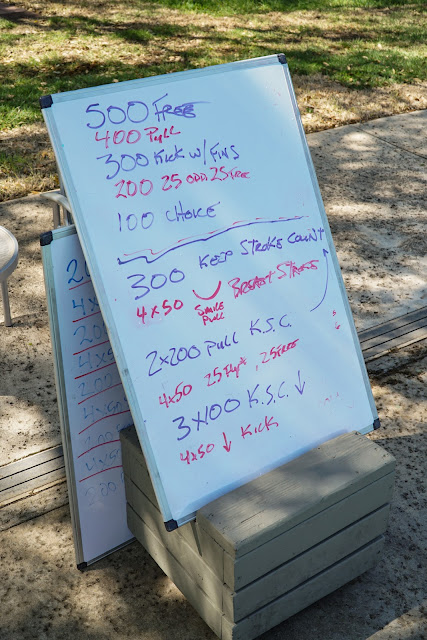 This is the workout the coach put up on the board for the Thursday noon workout.
It was fun. The downward pointing arrows instruct us to "descend" our times
which means the time elapsed for each repetition needs to be faster....
The secret? Don't go all out on your first 100...

Should you rush out and dump all your other cameras and lenses and buy one of the Sony a6000s and the 18-105mm f4.0 G lens? Well of course not. Just about any camera we shoot with today is pretty spectacular and at least competent to
Read more »
Posted by Kirk, Photographer/Writer at 17:05 6 comments: