I went to work today and made some portraits. I was copying myself and what I did for the same client a few months ago. 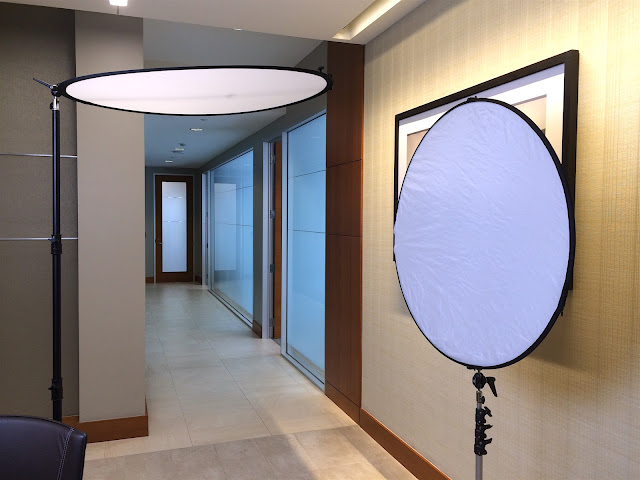 In the fourth quarter of last year I photographed a number of attorneys for a large law firm in one of the glorious new high rise buildings in downtown Austin. It was a fun shoot. The principals driving the photo shoot has seen a style I'd been shooting for several tech firms and liked it. They wanted a variation for their new website and so I found myself walking around the floor they inhabit, high above the street life, looking for cool backgrounds. We wanted to make a variation of environmental portraits where the background goes wildly out of focus and becomes a wash of colors and shapes.  If you are going to do this style you need some backgrounds that you can get far enough away from to drop off the focusing in a convincing way and those backgrounds should have some colors that work with portraits.

I found five or six different locations around the offices but the one I liked best was the above angle from the lobby looking down a short hall, with small conference rooms on either side.

Once the camera is set up and a subject in place this is what I want the background to do (see just below). 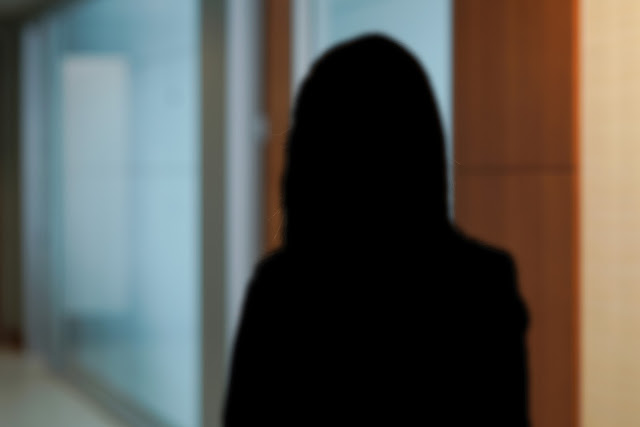 I've intentionally silhouetted the person in the photo because it's an actual client portrait and I don't have permission yet to actually use her likeness in the blog. That's one of the restrictions of being a working photographer....

The windows to the left and behind the subject are interior windows of frosted glass that form the interior walls of the small conference rooms. So the (indirect) light from outside is coming through the outside window, filling the conference rooms and then illuminating the windows that the camera sees. The hall is more or less daylight balanced. Once you find a background you want then the next part of the process is figuring out the relationship of the subject to the background and the spatial relationship of the camera to the subject. Those relationships show me where I'll be standing and how I'll be lighting to get the look I want. 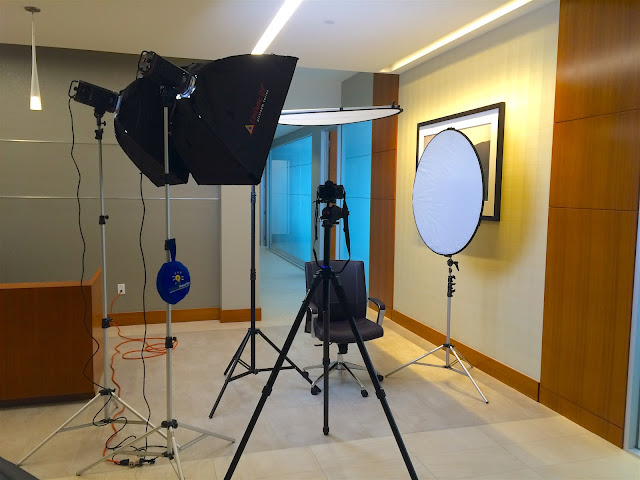 The image just above shows my basic set-up today from behind the camera position. So let's break down why I have everything set up the way I do. I'll start with the chair. It's NOT for the subject to sit on. The chair will be directly in front of the subjects and they will be standing behind it using the chair back as a device to rest their arms on. Their forearms and hands are outside the crop but having a place to put one's hands goes a long way to helping people pose more comfortably. Having something to put your arms or hands on also "anchors" the subject into defined area which means less worry about focus accuracy and inadvertent changes in composition caused by our talent moving around.

Bringing the chair in at the beginning also gives me a target zone for setting up my lighting and assorted modifiers. My next step is to set up my two 24x36 inch soft boxes. Each one has a CooLED 100 (these are the ones with the two by two inch square, SMD LED elements that effectively emulate the characteristics of a traditional bulb, as opposed to the less controlled panel LEDs we've used in the past.

I use two soft boxes, butted right next to each other, to both soften the overall light and also generate enough light output to get me the shutter speed/f-stop/ISO combination that makes for the best image. I love lighting environmental locations with these continuous output lights because it gives me good control over the total lighting effect while helping to prevent blinking and flinching that the anticipation of flash generally causes (in people disposed to having a sensitivity to quick flashes).

The next layer of stuff I add to the set up has to do with controlling the existing lighting that effects the area we'll be shooting in. My subject is actually standing in the lobby and nothing there is lit by natural light. Everything is illuminated by either long, fluorescent tubes or can lights in the ceiling. Since there are two different light sources, and both of them are not very well corrected. My job is to take that light off the subject altogether. I want to reduce or illuminate hard top light and the yellow/green spectrum the comes with it.

That's where the circular, pop-up reflectors come in. One gets placed a foot or two directly above the standing subject. The role of this round, translucent diffuser is to knock down the top light by two stops and to also diffuse any light that insists on getting through. It's a vital tool, otherwise you'd need to radically increase the power of the two lights in the soft boxes to overpower the hard, top light coming from ceiling fixtures, and then you'd change the total character of the light in the room and make the whole scene look very artificial.

The second reflector/diffuser is the one over by the wall on the right (looking from camera position). It's there to provide clean fill light in the form of bouncing the main light from the two soft boxes into the shadows on the opposite side of my subject. Having the while panel near the wall keeps the yellow cast from one of the ceiling cans from bouncing from the yellow wall paper of the wall back onto the subject. Kind of a critical addition if you want to keep your subject's face color neutral on both sides.

The LED lights are pretty accurately 5600 K so why do the windows in the background look so blue. The frosted glass is neutral and translucent but think about it for a second... The light that's transluminating them is coming from essentially open shade and since it's not direct sunlight it's actually somewhere between 6500K and 7000K which makes it much bluer in appearance that the daylight balanced LEDs.  The room is warmer than the LEDs or the outside illumination but we are effectively controlling all the light striking our subject directly.

The final step in the set up is to choose the right lens and then choose the right exposure/depth of field characteristics for your photographs. I was using a very fast 85mm lens on the front of a Sony A7R2. Using it at about f2.8 meant that we can reasonably tell that the background is an interior office space but without showing too much distracting details. The softness of the background goes a long way toward concentrating attention on the subject while the interplay of different color temperatures also helps to separate picture elements.

To try and do the shots with just a fast lens and no lights or modifiers would result in an image with weird shadows on the subject's face along with providing a tough time for anyone trying to deal with the ongoing cascade of colors and tones. 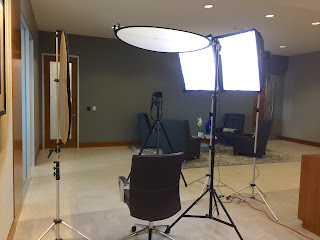 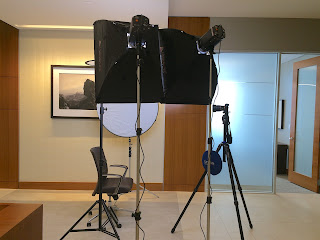 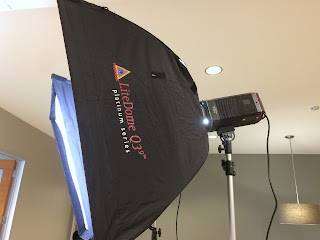 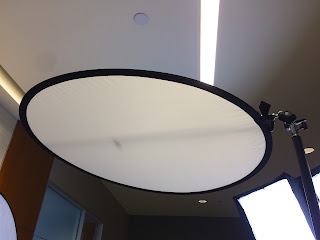 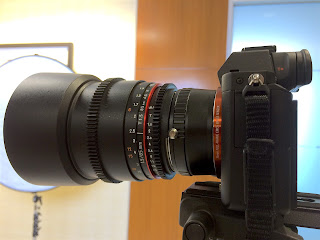 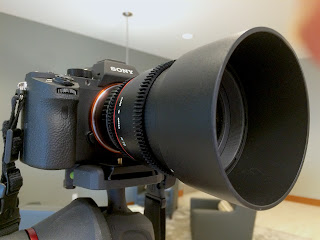