Every project has its own set of surprises. It's how you handle the unexpected stuff that determines the success of your photographic assignment. 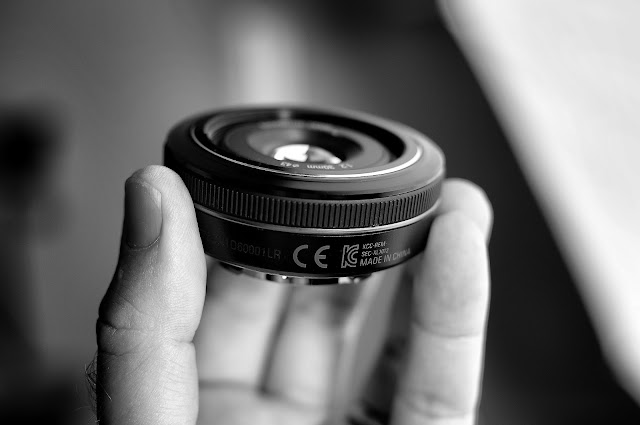 the Samsung NX cameras are long gone but I always found their lenses oddly photogenic...

Ben and I left Austin on Monday, bound for Baton Rouge, Louisiana via DFW. We packed meticulously to save space, and minimally because we anticipated being back in Austin on Weds. at midday. The plan was to arrive in Baton Rouge with our client in tow, get a rental car and scout two or three locations. We'd be photographing a model and a medical appliance in three different locations and we anticipated starting bright and early Tues. morning. We felt confident that we'd be able to wrap the project by the end of the day, go out for some of the amazing Baton Rouge cuisine and then head back to Austin bright and early the next morning on American Airlines. But sometimes (many times?) the best plans of photographers and their clients go awry because of things beyond their control.

When we hit the airport in BR the client checked messages and was disappointed to find that the product got misdirected and wasn't waiting for us at the hotel. In fact, it was still back in Austin. A series of phone calls left us assured that the product would be delivered first thing the next morning so we sucked it up, had lunch at a decent burger joint and proceeded with out scouting. We found three great locations and locked down the details. That night I spent time writing e-mails to clients, doing estimates, etc.

The next morning delivered a double whammy. The first bad news was that we'd have hard rain for pretty much the entire day. The second bad news was that our product didn't show up and UPS had no tracking information for it. None at all. Yikes. Early in the evening we felt pretty confident that UPS would find and deliver the package on Weds. morning. We decided to cancel our airline tickets and stay that day to shoot. We'd make other arrangements to get back to Austin. But a bit later in the evening we were back to our earlier situation: No tracking information and no guarantee.

At this point we had to start making contingency plans. We decided to wait until 10am on Weds. morning in order to see if the box with our important cargo might arrive. If it did we'd stay and shoot. If it didn't we'd cancel, head back to Austin and re-configure the shoot for a future date. We decided it would be more efficient, since part of the budget had already been spent, to bring the client to Austin and do our shoot here. Sometime in the future.

Now, when you go on locations there is always the possibility that something will happen to delay or deliver a "death blow" to the job. We billed a "travel day" to get there. We planned on billing a day of shooting + usage fees and a travel day back. Since this was out of our control and out of the client's control we started negotiating a "kill fee" to strike the project. The client would still pay for our travel days on each side of the original shoot day but we would charge them a smaller fee and, of course, no usage fee for the anticipated but now defunct shooting day. Everyone handles this differently but with good, long term clients I think it's a good idea to accommodate and share the pain. We always had the promise of completing the project in the future and gaining back our full fee then. On the other hand a day lost is a day of potential earnings lost... We value the long term relationships with most of our clients a lot more than we value a one time fee so the decision to compromise was a no brainer.

We checked on re-booking flights and it would be a fairly hefty amount. I suggested we just drive the rental car back and we quickly researched on a map app just how long that might take. At about 6.5 hours of steady driving it pretty much matched out time commitment to get to the airport, through TSA and fly back. Keeping in mind the DFW connection.  Our plan gelled. We'd wait till 10 am on Weds. and if there was no product to shoot we'd hit the road. With no tracking info forthcoming we were pretty certain, as we headed to bed, that we would not be shooting in the morning, we'd be driving back to Austin, through Houston, in the rain.

Imagine our surprise (and the latest challenge to our mental flexibility) when the UPS truck pulled up in front of our hotel, as we were eating an early breakfast, and disgorged our big cardboard box. We got in touch with the talent, put ourselves back on the schedule and got busy. By 9:30 we were at our first location with the product prepped and our scene well lit. We hammered through the day and nailed down our last shot at 4 pm.  By 4:30 pm we were heading toward the city limits; three guys in a rented Jeep Compass and a cargo area full of camera gear.

Ben was a trouper on this job. He never uttered a single word of discouragement or frustration and stayed on problem solving mode every second on the job. We had a lot of downtime but he brought a novel along to read. He was instrumental in assembling the "hero" product correctly and he brought more detail awareness to ancillary props that I would have. He even tamed two loud dogs at our primary location. Even though he hates the idea and reality of road trips he jumped in and did his part in the car crew.

We took turns driving and went straight through except for a 23 minute dinner stop at the Whataburger in Winnie, Texas. Our client dropped Ben and me off at the Austin Bergstrom Airport parking garage just a bit shy of 11:00 pm Weds. night. We were home before midnight.

Even though we packed for every contingency we really couldn't shift the reality of a missing delivery. Though I packed ten batteries we did the whole project on a Sony A7r2 with one battery and still had charge left at the end (465 x 14 bit, uncompressed raw files with some chimping). We shot about 32 gigabytes on one SD card. I will admit I was nervous to have all my eggs in one basket so I got up early and ingested the card's files into Lightroom, writing them into two different hard drives.

The files were right on the money. I'm happy and I'm pretty sure the client will be happy as well. I've color corrected them and am writing this while waiting for them to output.

A few more business notes. It doesn't matter who lost the package or why there were delays. The assistant gets paid for every day they spend on the project. If they stay or travel an extra day then they get paid for that. Nor is there a discounted rate for assistants (and there shouldn't be since the projects are almost totally out of their control).

You may be one of those "hard nosed" business guys who have prices spelled out for everything. I prefer to bend a bit and try to soften the blow for good clients. In one sense it should be human nature to share burdens but in a more mercenary sense it is a lot harder to find new clients than it is to make a few accommodations and keep long term, happy clients. The reward is a good and efficient relationship that lasts years or decades and not just one project.

Even though the delays were frustrating nobody let their emotions get frayed. We just re-planned until the project worked and then mutually patted each other on the back for getting it done. And that's the way it should be. 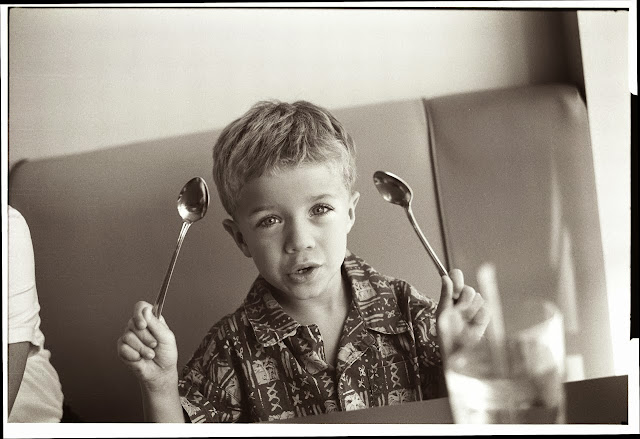 a much earlier Ben at Asti Trattoria. Ready for pasta and breadsticks. 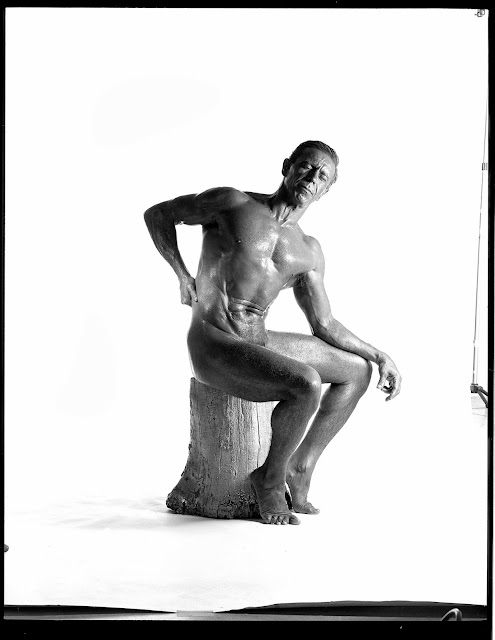 Amazingly, after driving for 6 hours, my back is tranquil and happy.

Posted by Kirk, Photographer/Writer at 20:45 2 comments:

While the Samsung NX cameras are long gone from the studio. I did think the lenses were quite photogenic themselves...

When last I wrote things were perilous for the health of our advertising photography job. We were in a hotel in Baton Rouge loaded with good equipment, blessed with a keen and competent assistant, and a smart and noble client, but we lacked one essential; the product which was to have been the hero of the ad campaign. Our short term reason for existence.

I thought I would follow up on the story. We stayed over one more night after spending a listless day of soggy site seeing, and fending off boredom with good lunches and tattered novels. We lost hope that the package would arrive and allow us to complete our task and, in surrender, started making alternative plans. A general re-figuring of the whole project. Since we three are stubborn by nature, and dig our heels in by training, we decided to wait until morning and see whether the tracking details of the package would be revealed. Would we be informed that it was forthcoming? Otherwise we'd pull up stakes, pack the valises and trudge back to Austin --- in a rental car. (We had already cancelled our airline reservations).

The next morning we ate our eggs and drank our coffee in low spirits. Then our client looked up and out the window. The package had arrived with the dawning of the new day. We jumped up and retrieved our missing link and revved up the motors of imaging. With serious and deliberate purpose we moved through our three main locations and our model joined us to make everything work.

It was a hot, sweaty day punctuated by sudden rain showers that engorged the heated atmosphere like a ladle of water tossed on the burning hot rocks of a steam room. All of our locations were exteriors and the heat was oppressive. But we kept moving and shooting. Every scene diligently explored. Wide, medium, tight. A second and third angle. A range of emotions from our model. A tweaking and re-tweaking of the lights.

At 4:30pm we'd cleaned our plate, conquered our checklist, dotted our "i"s and crossed our "t"s. There was nothing more to shoot. The project was complete.

Soggy and dehydrated we loaded our vehicle and headed for gasoline and cold drinks. I did something I haven't done for years; I got a large Dr. Pepper with lots of ice. Every gulp was refreshing and I didn't even give a thought to the sugar crash that may be coming along in a while.

We aimed the car toward Austin and hit start on the map apps on our phones. And we drove across the bayous and swamps of Louisiana and into the soft, rainy night of Texas.

The files have been edited (that means we've tossed the ones we didn't like...) and now they have been post processed (that means color and contrast corrected, with filters added where indicated) but they have not been retouched (changing the structure of the pixels to hide a fault or emphasize a benefit). That's someone else's job.

I was thrilled that we were able to finish what we started. It's depressing to miss an opportunity to do fun work. Rather than snatch ashes from the jaws of impending success we hung in there until we could complete our tasks.

I am a bit exhausted today but I am satisfied both with the work we did and the change of fortune  as the week progressed.

Posted by Kirk, Photographer/Writer at 19:08 4 comments: