A story from the archives. Elton John, Andy Roddick and Rick Perry walk into a hotel.... 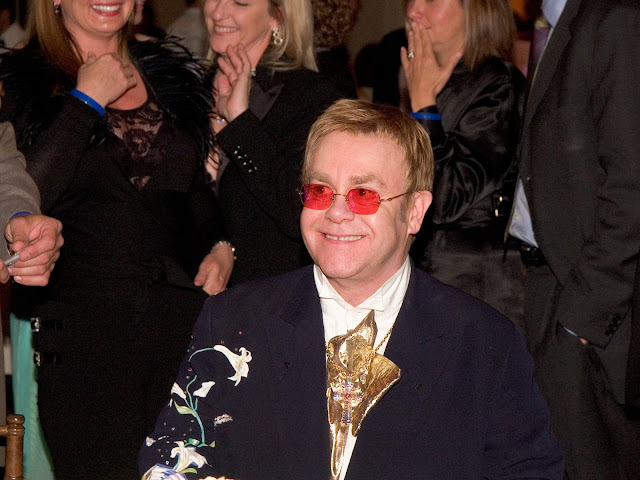 I thought I'd break with our little tradition of mixing gear reviews and photo-philosophy by telling a little story from the archives. It was back in 2005 that I got a call from Andy Roddick's people. Andy's foundation was going to hold a fundraiser for the new Children's Hospital and they wondered if I would be available to photograph the event. The people asking were good friends and always well intentioned and so, of course, I said, "Yes." Then, having secured my engagement they let the other shoe drop; the guest of honor and entertainer would be Sir Elton John. I've always been a big fan to so I was incredibly excited to be on the team.

Now, by way of a little back story, our Governor at the time in Texas was the redoubtable Rick Perry. The same guy who more or less stumbled his way through the primaries an ill-fated campaign for president this year. Back in 2005, in an attempt to curry favor with the more conservative factions in Texas (and just two weeks before Sir Elton John's visit) Perry decided to push an amendment to the state constitution basically banning gay marriage. The legislation was called "Proposition 2" and it was passed by Texas voters in November of that year. Now, I don't know if it was a coincidence or not but just one week before coming to Austin, Texas to do his part raising money for the kids, Sir Elton John very publicly announced his official marriage to his long time, same sex partner. Around Austin people were pretty sure that this was his way of answering Perry's Prop 2 (later struck down by the U.S. Supreme Court...).

The day of the shoot finally arrived and I was excited (I was a fairly big Andy Roddick fan and a Yuuuuge Sir Elton John fan ---- a side fact, E.J. is a well known collector of photography and had, last I read, a world class collection of work. An eclectic collection...  but all top quality work...) to see them both in person.

I packed the gear I was using at the time. It was a bit of a weird mix. I was getting into the Olympus system and brought along a couple of E-1 cameras (5 megapixels) with two zooms, and also a Nikon D-70 to use as my flash camera.

The venue for everything was the Four Seasons Hotel in the downtown area. We started out with a "press only" news conference with Andy Roddick. Later in the afternoon Elton John arrived and he met with Andy in one of the downstairs conference rooms. I was the only photographer in the private meeting and was called upon to take shots of Andy and Elton together as well as shots of them both arranged in various groups with members of Andy's family. It was very casual and laid back. I introduced myself to Elton John and he and I bantered back and forth for a bit about photography, Austin and Texas. 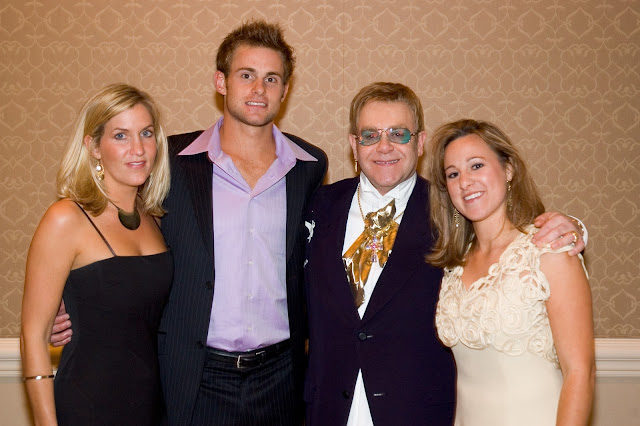 A few hours later we headed next door to a larger conference room for a press event with people from various print news outlets and three TV stations. It was typical of social news event coverage. Lots of innocuous questions and an emphasis on continually mentioning the charity that would be supported.

We had a break after that and I wandered around with my cameras and talked to some of the other shooters in the foyer.

Around 6pm the reception space outside the grand ballroom started filling up with people in fancy clothes, throw back suits, and well to do people clutching albums and CDs to get signed. Sir Elton John would be the guest of honor for a formal dinner and then would play a solo concert for a very lucky room of about 300 people. The doors to the dining room opened at 6:30 and people streamed in. Sir Elton John entered from a side door, shadowed by two of the most proficient looking body guards I have ever seen, and was quickly embraced by the crowd. He was gracious, signed autographs, stood for photographs from all comers (thankfully, this was before the selfie craze....) and was generally the magnetic attraction in the room.

At some point before dinner Gov. Rick Perry entered via a side door followed by his Texas Ranger bodyguard. The Texas Ranger was wearing his gray, felt cowboy hat. Perry was dressed totally out of character in a black turtle neck pullover, no glasses. He started to make a beeline in the direction of Sir Elton John. After all, what politician would not want to stand next to the center of gravity? But he was intercepted by one of E.J.'s enormous body guards who leaned over to the Gov. and said something, quietly, that I couldn't quite catch. Whatever it was Perry stopped in his tracks and found someone else to talk to. A short time later he vanished out the door he'd come in through and did not return. The scenario with Perry and  EJ's bodyguard flew under most people's radar. But I was there to observe and document everything and it was from my overwatch position on the stage side of the tables that I had the vantage point to observe that instant.

After dinner Sir Elton John walked up to the stage, sat behind the grand piano and mesmerized the entire room with an hour long concert of our favorite hits from an arc of forty-some years. No one was allowed to photograph near the stage. I remember being the only photographer in the room.  I captured the concert on the Nikon D70 because I happened to have the old 80-200mm f2.8 lens in my bag and it was the longest lens I owned. I was positioned at the back corner of the room, near a door to the kitchens.

Looking back at the files from the time leaves me with some mixed feelings. The images remind me of just how much fun it was to meet and hang out with someone whose music I had always enjoyed. A true celebrity in every sense of the word. It felt good to realize that my work allowed me to occasionally meet people who have changed the world. At the same time I look at the images and realize how primitive (relatively speaking) the cameras I was using at the time were, compared to current models.

How different the image quality might have been if I'd have had a longer lens, a bigger sensor, some in-camera stabilization, lower ISO noise, etc. But that's a silly way to feel. Looking back at the actual images I see that we got our part of the job done and that the content (as nearly always is the case) trumped the constraints of the technology of the time.

I packed up and headed home as the concert wound down. I edited my photographs and sent along my selections to the Andy Roddick Foundation and then got back to work with my regular clients. But for a week or so I was a bit star struck and every other job seemed a bit mundane. In the end Elton John and Andy Roddick raised well over a million dollars for the charity. A job well done. 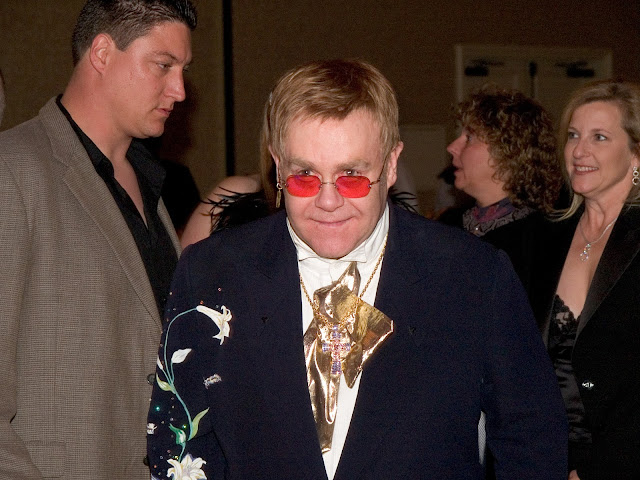 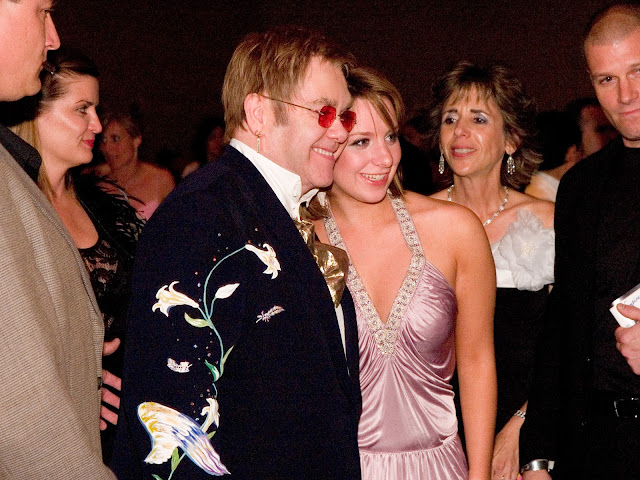 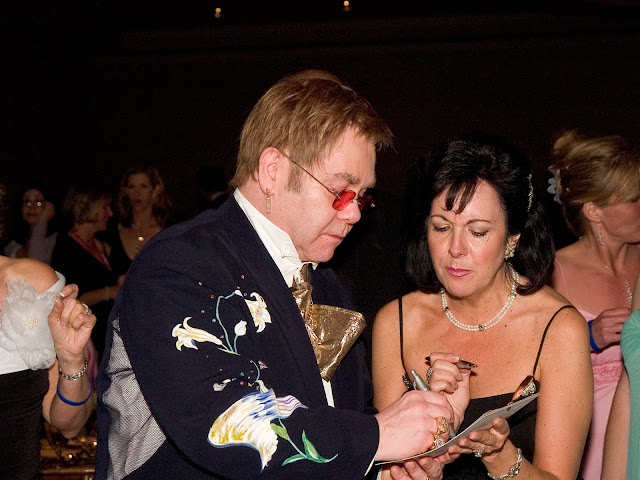 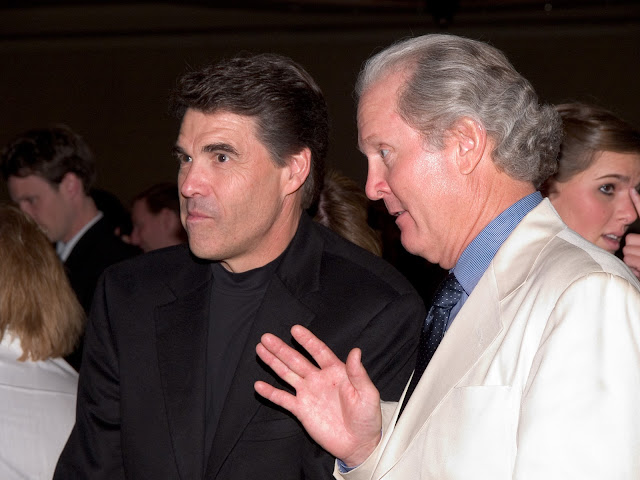 And two from the actual concert: 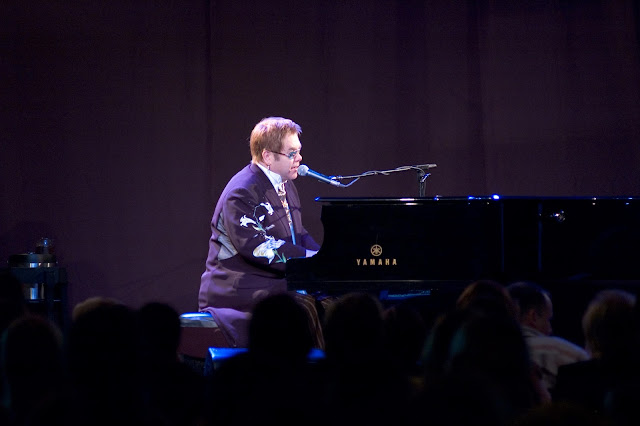 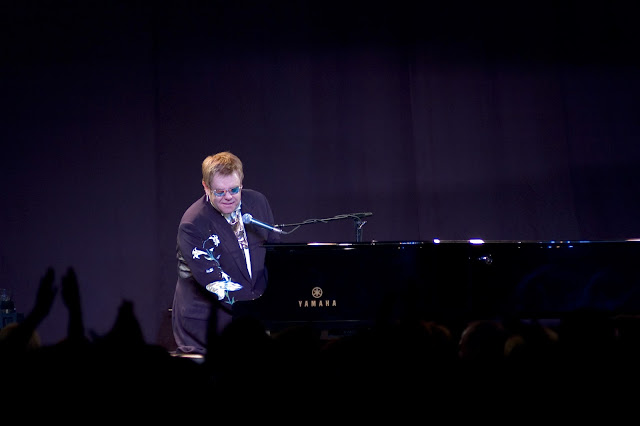 Posted by Kirk, Photographer/Writer at 12:27 6 comments: