One of the features I've always valued in the Olympus and Panasonic cameras is the option for a 1:1 aspect ratio. 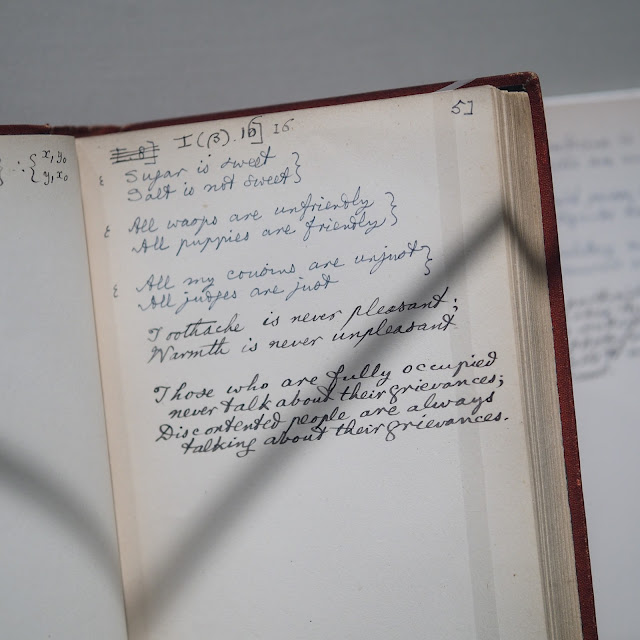 A journal of Lewis Carroll.

Every so often I'll write about how enjoyable it is to shoot with a camera that can show a 1:1 aspect ratio, with black borders, in the EVF. Before the blog ink is even dry someone always posts a comment telling me that all frames from any camera can easily be cropped into a square in post production; the ability in camera is, to them, meaningless. These individuals suggest I should, therefore, reject the wonderful advantages of being able to see the boundaries of the square at the time of composition and instead see the square within a more awkward flabby frame at the time of capture, and then be able to replicate same cropping, after the fact, while working with the image file in post production. This fascination with post capture cropping might have H.C.B. spinning in his grave.

Persons peddling this preposterous proposition are, of course, insane. Having black on all four sides of a square composing tool is heaven for anyone who values the perfect symmetry of the square frame. In fact, psychology professionals use this particular choice scenario to determine who might be a danger to themselves or society. In some countries having to use a camera with no changeable aspect ratios and no electronic viewfinder is punishment for petty crimes such as shoplifting or jaywalking.

All the images here were shot with a fully functional camera. They were shot square because the photographer determined that he wanted to shoot square and he set the camera to show him a square frame in the electronic viewfinder. Shooting in Jpeg he was able to go from initial capture all the way to the final sharing on the web without ever seeing parts of a greater scene extending sloppily outside the confines of the 1:1 aspect ratio. It was great. Comfortable. Logical. Reasonable. Fun.

Going to museums with a square capable capture device seems normal and sensible to me. If you want to see the kind of havoc caused by a camera unable to realistically show only a square competition you need look no further than to the last image in this series; at the bottom of the page.
Just image how much better that image would look if the 3:2 ratio of that camera's finder hadn't intruded in the process..... 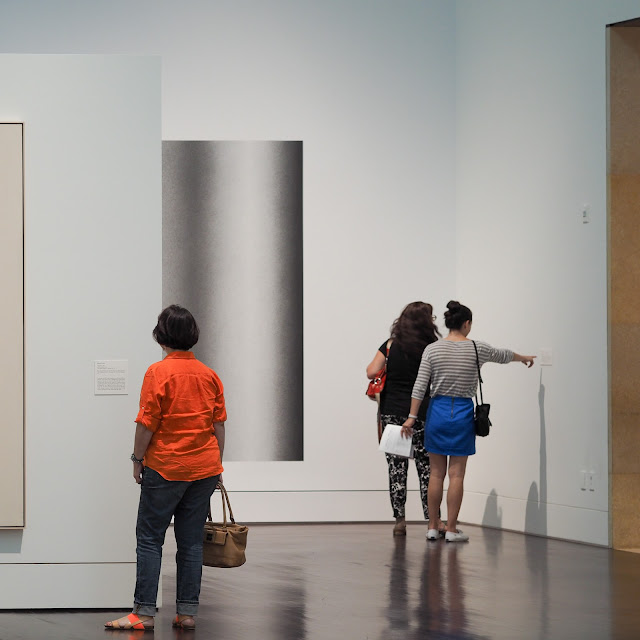 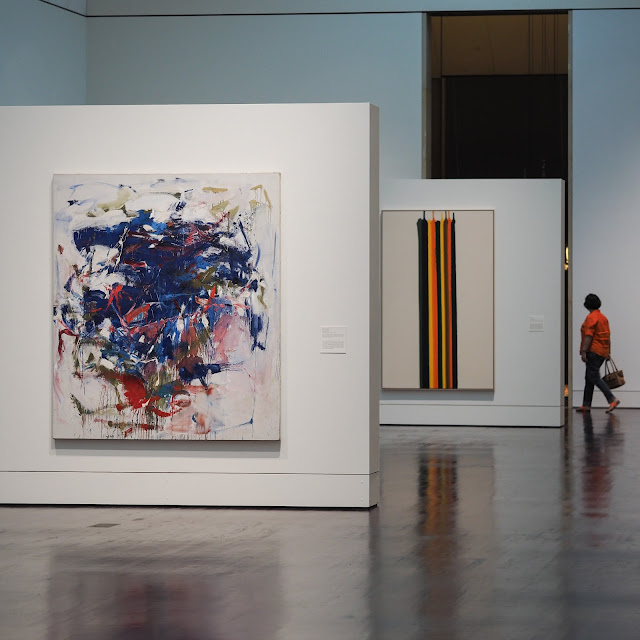 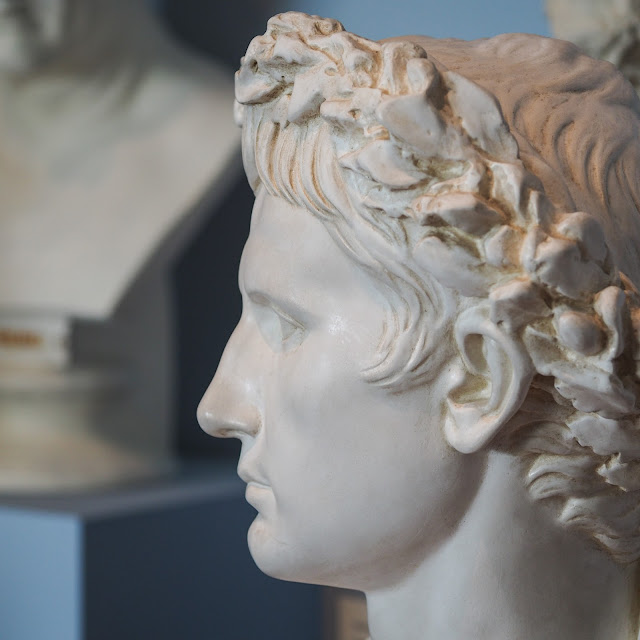 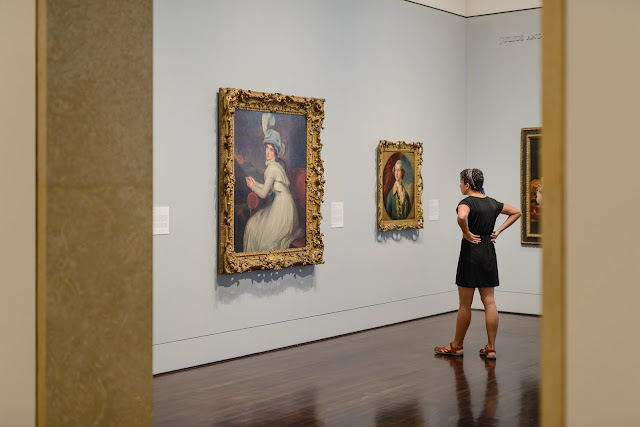 But the heart of the composition is still a square.

Dare to be Square.

Posted by Kirk, Photographer/Writer at 22:50

Maybe it's just because I started taking pictures (long, long ago) using only Kodachrome 25, which meant that what I saw in the viewfinder was what I was going to get in the final product, but I love the ability to set my image frame at the time I'm taking the photograph. Who wouldn't want to take advantage of that?

Totally agree. I love shooting square. And those that don't get it puzzle me. It is not good enough to crop. The image must be composed in camera as far as I am concerned.

The lack of a 1:1 setting on Sony A7's is a big downside in my opinion. It would be so easy to do and yet Sony doesn't bother, which irks me to be honest.

Nicely done. That final image made me smile.

To state the obvious, these all look great in the square format. I love the Olympus cameras's ability to shoot square JPEGs (though I don't often do so, except in 'Dramatic Tone with border' mode, as I did earlier today) AND capture the full RAW as well, so that I can decide later on just how to process it if I want to. I have Panasonic and Sony cameras (amongst others!) as well, but as I rarely shoot video now, due to age and health; size and weight of Olympus is often the factor in choosing the camera to use. I never had the original Pen F, but I do have the original Olympus Pen and Pen D (both from new), as well as several digital Olympus cameras.

Thanks again for an excellent web site.

Totally agree with you on this. I often take my GX7, set it to 1:1, put it in B&W mode and flip the rear screen up 90 degrees to emulate a waist-level viewfinder. It's fun shooting with my digital twin lens reflex (or Blad, but the silence is closer to the TLR experience.)

My EOS M cameras have that. If I shoot RAW (pretty much always) Lightroom picks up the crop from the metadata but retains the whole 2X3 image so I can change my mind if I want. I just click on the crop tool and the whole image with the 1:1 crop overlaid. Pretty neat IMO.

Every camera I use is set to square. The only reason I don't like my Sony A6000 is that it won't show a 1:1 ratio in the viewfinder. Lee Freidlander loves square because he says that it gives him more sky. Also, being as lenses are circular they project a round image. So, a square format is in the sweet spot. None of those blurry rectangular corners.

I'm a square guy. I love the square, it's so neat and tidy. When I teach photography I find that students are amazed at how much better their images are once you overlay an adjustable square frame over their image.

I do not understand why camera makers, especially mirrorless makers, are not giving us more choice of ratios. Square is great, but I would really like to have 4x5/8x10 as an option.

They could even give us user defined, if they wanted to.

Part of the reason I have stuck with m4/3 (and 4/3) before it is the squarer shape is a better fit to the way I see photos.

The ability for the OVF in my Canon 5DSr to mask various aspect ratios is wonderful.

Of course my Panasonics do it but I do like the native high res for some projects.
I shoot RAW and JPG and the images come through as full format but there is a crop line on the JPGs.

In fact, a lens, any lens, projects a circular image on the sensor. The "format", 2:3, 4:5, 16:9, etc. is actually cut out from within this cercle. A square, whose corners touch the circumference of said circle, is the most economical format in that it is the largest quadrangle (greatest area) that can be cut from that circle (for some reason our frames are quadrangular; they could be circular, like the original Kodak negatives, or any othe size, for that matter.)
Rolleiflex and Haselblad (and Mamiya and Bronica) got it right: start with a square, which uses the normal projection from the lens, and crop from that; rather that the other way around.
I've never understood the rationale behind "modern" formats.

Those of us who shot square for decades with the Rolleiflex or Hasselblad still think in terms of square frames. I often set my Fuji X-E1 to a monochrome emulation and square frame. And then, after a few frames, I get out the Rolleiflex and have fun all over again.

I use my Pen-f with the panaleica 12mm in "square-mode" all the time. It becomes a digital SWC!

I love square images from my Panasonics, but will often compose in-camera for the vertical part of the framing in 4:3 mode and compose-in-post (i.e. crop) for the horizontal part of the framing. Why? Because I have more time in post to carefully adjust the composition.