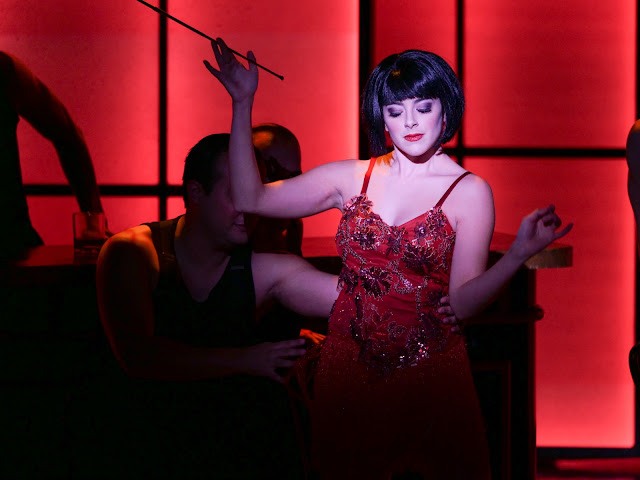 A handheld, image stabilized still shot from "Singing in the Rain."

It's hard to make definitive statements about the effectiveness of  image stabilization across brands, models and different sizes of image sensors but...someone asked and I thought I'd give it a try. I haven't shot with all that many cameras so I'll focus on the ones I know of from experience.

The current top dog of image stabilization, with utterly miraculous performance, is the latest Olympus EM-1 mark 2. Nothing else can touch it. Unless you are a ten cup per day coffee drinker you can pretty much ditch your tripod. This should not surprise anyone who had previously shot the EM-5 mark 2. I owned several of them and they were steady enough to use hand held when shooting video (see the Cantine video for end to end Olympus EM-5 mark 2 samples --- in motion).

The one addition that makes the EM-1.2 the best of the best is the ability of that camera system to use both the lens I.S. and the in body I.S. together. At best the system delivers 6.5 stops of stabilization. If not for the god awful menu system I might have bought that camera instead of the GH5.

The GH5 also has a dual I.S. feature and it works very, very well with a limited number of lenses from Panasonic. Using just the in body stabilization is very, very good as well. I've been using it with several Olympus zooms and several current Panasonic primes and find it to be in the same class, overall, as the Olympus EM-5.2.

The stabilization in both the RX10ii + iii, as well as the Panasonic FZ2500, is equally good. It's the latest five axis variety and since the lenses are built specifically for the body/sensor system I believe they are able to optimize their I.S. to good effect.

As we move up the format size in cameras that use in-body image stabilization we get less and less overall effectiveness from their systems. The Sony a6500 is at least a stop or a stop and a half behind the m4:3rds cameras and the Sony A7ii and A7Rii are at least a stop worse off than the a6500. And most of the bigger cameras have yet to incorporate competitive dual body+lens I.S. systems.

All bets are off when it comes to comparing systems that only use lens stabilization. For one thing not every lens you want to use is stabilized. But when done well the lens stabilization can be quite good.
When I worked with Nikon I bit the bullet and bought an 18-200mm lens even though I knew it was not a spectacular performer optically. I bought it because there were situations when I really needed stabilization and would not have time to use lights or a tripod. That lens delivered a stable shooting platform and was an eye opener. Rock steady shots but humdrum optical performance. A trade off.

Not so with the newest Panasonic and Olympus flagship systems. You get rock solid stability and great optical performance from their Pro series lenses. My least satisfying image stabilization experiences have been with cameras like the Sony a850 and a900 full frame cameras. They gave, at most two stops of stabilization (which is nothing to sneeze at compared to ancient times) but with some lenses they seemed to perform with less enthusiasm, delivering maybe a stop different at longer focal lengths.

All things being equal (but they never are) logic would suggest that one inch sensors should be the easiest to imbue with the highest stability performance followed by the m4:3rds and then the APS-C sensors and finally, in next to last place, the full frame sensor cameras. In last place would certainly be the medium format cameras whose only advantage is sensor size and, when dealing with camera motion whose biggest disadvantage is.... sensor size.

1200+ images shot handheld with the GH5 and some Olympus Pro lenses last night show me that the system is highly competent and workable for me. If I wanted the best offered anywhere I'd be putting those Olympus lenses on the front of an EM-1.2 camera body and never look back. But I.S. is only one factor among many in the pursuit of good photography. Compromises abound. That's what makes it all so interesting.

Thanks Kirk for the extended reply to my inquiry. Pretty much in line with my thoughts, but it’s best to hear about your experience. Given the way my hands have begun to jiggle n jaggle I am narrowing my next camera search down to the smaller sensors. Muchas gracias, señor!

Try to position yourself in the front of a Tricycle Uncle (Singapore) tricycle - with no suspension at all - and ask for a trip from Tricycle Uncle HQ to Clarke Jetty at the Singapore River through the well paved streets of central Singapore a few hours after noon on an ordinary thursday with relatively low traffic.

I placed myself as comfortably as I could, held onto my GX80 camera with my 12-60 mm/f3.4-5.6 travel-zoom, the system ordinarily delivering beautifully stabilized handheld results. Also for UHD video.

Not so in this case. The combination of no suspension and my rather large "inertia" made it virtually impossible to get a steady result for more than a few seconds at a time. One moment things looked good, then bump, and a short part of the UHD video was actually compressed vertically (rolling shutter is a luxury in comparison), then again a short stretch without problems followed by another bump, this time resulting in a short sequence, where the UHD video was vertically expanded.

The missing elasticity of the tricycle, combined with the built-in elasticity of my behind, and the inertia of my body system as a whole, quite clearly surpassed the limits of the dual-stabilization of the camera-lens combination (i.e. distances were larger, than compensation was capable of handling).

So, yes, I can testify to the correctness of your statement.

Regards and a big smile

It seems to really depend on the lenses. The 35mm f/2.8 and 55mm f/1.8 seem to work great with the in-body stabilization.

The 90mm macro, which has IS built-in, is pretty bad when it comes to steady shots at slow shutter speeds. But the optics are perfect.

Thanks for catching my error, Tom. I've fixed the copy to reflect what I meant. Best, Kirk

So, if I read this correctly -- the Sony RX10 II, III and the Panasonic FZ2500 offer stabilization which is as good as the Olympus EM 5.2.

That would mean my only loss in trading my EM 5.2 and its Olympus lenses for an FZ2500 (other than feeling like a traitor) would come in the subjective realm of image quality in still photography. True?

When I look at what others have produced with the EM5 series it seems absurd not to stick with it. But I keep fighting with the camera. And losing.