Olympus 40-150mm f2.8 Pro on the Panasonic GH5 to document a holiday theatrical production. How's that working out? 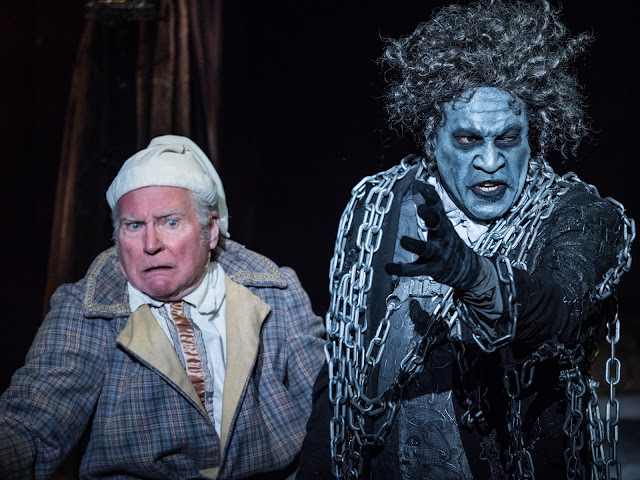 Scrooge and the Ghost of Jacob Marley get the party started in Zach
Theatre's amazingly modern version of "A Christmas Carol."
(Actors: Harvey Guion and Roderick Sanford)


The holidays are upon us. Run for your lives...
Just kidding, just kidding. I'm recovering from my second "running shoot" of Zach Theatre's amazingly fun version of the old Charles Dickens play, "A Christmas Carol." This not our parent's take on Dickens. No, this version is peppered with comedic moments, hit, contemporary music ("Shut up and dance with Me" Madonna's "Holiday," and plenty more) as well as great choreography and some of the best stage lighting anywhere. I mean, come on, Dickens with disco balls? Perfect.

If you live in Austin and you don't go you'll miss something fun, heartwarming and so thoroughly profession in its production that you'll take note for future photo or video shoots.

I'm photographing the big productions in the Topfer Theatre in two stages. I shoot during the "tech" rehearsals on Sunday nights to get lots of angle from close to the stage. I also go to learn the tempo of the production. To see just where the finales of each number end up and to get a handle on the blocking. It helps, when shooting the dress rehearsal, to know where the actors
will end up at any one time...

Since I'm able to work close in on Sundays I used only the Olympus 12-100mm f4.0 Pro lens on a GH5 to shoot during the entire evening. For the dress rehearsal we had an invited house full of friends and family so I get stuck in a mid-house center row. I can move parallel to the stage on my reserved row but moving around the auditorium is tough to impossible ---- I really don't want to ruin anyone's view or concentration.

So this yesterday (Tues.) I worked nearly all night with the Olympus 40-150mm which, on the GH5, gives me the same angles of view as an 80-300mm f2.8 on a full frame camera. From the center position I've got a good view of the entire stage and the lens is flexible enough to give me tight shots of two people (see above) as well as shots that cover up to a third of the stage at a time. For dance/musical numbers that are nearly the width of the stage I've got a second body set up with the (irreplaceable) 12-100mm lens ready to get wide shots. It's a nice duo.

The underlying light color on the stage hovered around 3700 to 3800 K so that's where I set the camera. I tweaked a few files in Lightroom when tons of gels moved the flesh tones to far to one color for my taste. I shot all night long at f2.8 and never worried for a second about sharpness. Most of the time my exposures were in the range of f2.8, shutter speeds 1/100th - 1/250th, with occasional spikes up to 1/400th. All at ISO 800. I was shooting raw, and I always live in fear of blowing the highlights (especially in very contrasty and uncontrollable light situations) so I shot about 1/3rd to 1/2 stop under "correct" exposure and then corrected the files in post processing. In nearly ever file there is some boost to the shadows.

As you know, in manual exposure they've all but replaced the traditional concept of light metering with mirrorless cameras. Now I use the image in the EVF, supplemented with the use of 100% zebras, to set correct exposures and it's a lot more reliable for constantly changing light cues.

Just to screw with Jerod Polin I shot some images in Raw and other in Jpeg with no rhyme or reason. It was fun.

This morning I sat down with 1,500+ raw (and some Jpeg) files and started to edit. I open the import menu in Lightroom, click on Uncheck all and then start scrolling through the images, checking the image's box when I decided to include it in the edit. Once I had all the candidates ingested into Lightroom I started my corrections routine. It usually works to correct/batch by groups that are all similar but when I find exemplary images I spend time tweaking them and I flag them as well.

Once all the images are corrected/processed I hit the button to export them all at once to a folder as full sized Jpegs, saved at 96. Then I grab my swim bag, steel my resolve and go to Deep Eddy Pool to plunge in and swim laps. I figure converting and exporting 800+ raw files takes about two and a half miles in the water to complete. (The water today was 72 degrees. Still cold by my standards....).

When I get back home I start the upload for the files to a new gallery in the Zach 2017 Content folder on Smugmug.com and then head into the house for lunch. With my internet connection it takes several hours to upload the 12+ Gigabytes of material. Once I've gotten it up I send an online gallery to the client along with download links for the entire take. They get to do the final, final edit.

We'll take the day off tomorrow to celebrate Thanksgiving with my parents. Belinda and I will be cooking and serving and cleaning up. Studio Dog is tagging along to help. It should be a mellow and happy day. Hope everyone up north stays warm. Hope everyone south gets a bit of cold weather to make it feel more like the holidays. And I really hope everyone gets out of the house during the day for a good run, a swim or a rigorous rugby match. It's no fun to go through life as a spectator. :-) 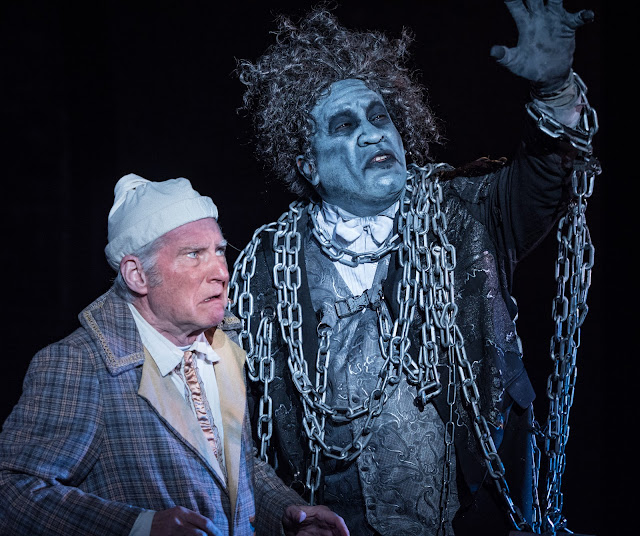 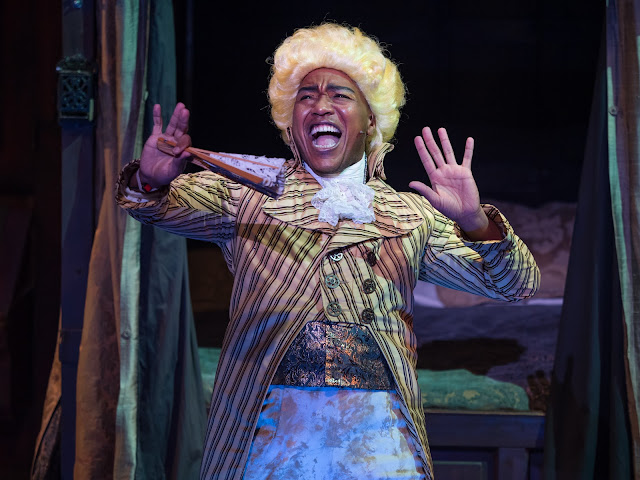 Kenny Williams owns the role of "The Ghost of Christmas Past." 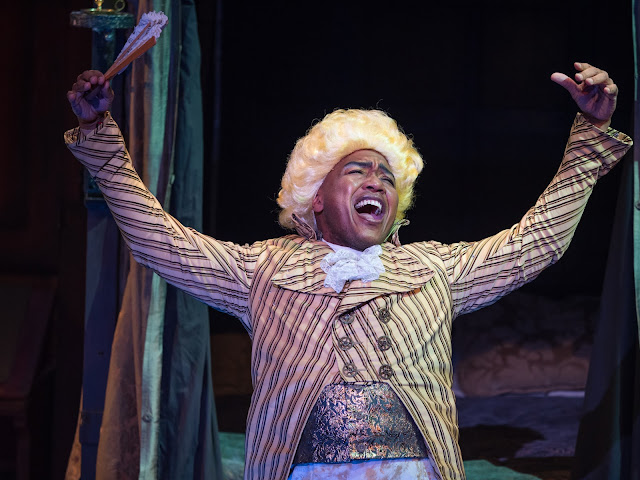 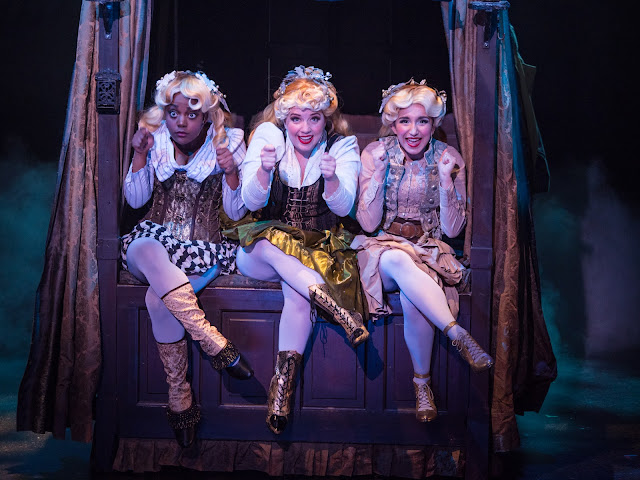 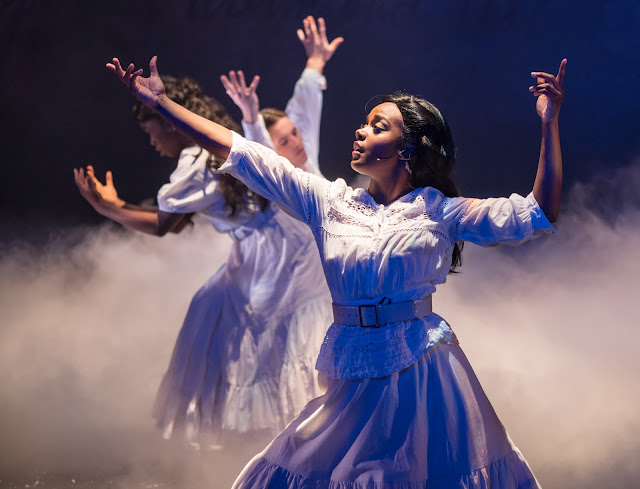 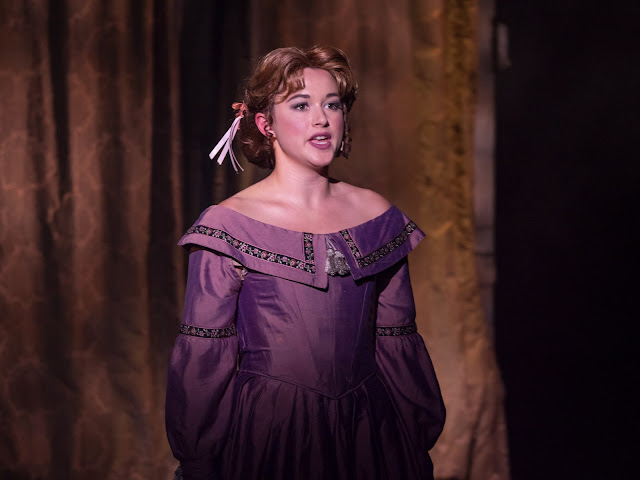 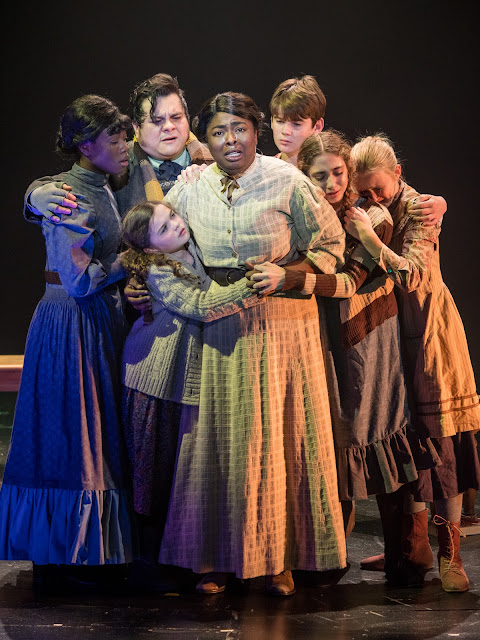 Posted by Kirk Tuck, Photographer/Writer at 16:23

The photographs look great! They look like I was actually there.

Should you ever need anything a stop faster, you might try the Samyang 135 f2. I recently picked one up cheap and am extremely impressed by the sharpness/contrast wide open, and surprised how effective the stabilisation on the EM5-II is with it (reliably handheld at 1/40s).
A bargain for what it provides.

Thursday Morning Thanksgiving day. Great images. My Brisket is hitting 144 close to the stall and on schedule to be ready to transport to our kid's house in Liberty Hill north of Austin, at noon.

Good tip about importing batches of images, from within the greater set of images, which have similar characteristics.

Beautiful photos, but I don't think it's because of the equipment. It's your skill. Happy Thanksgiving.

Love reading your posts when I have time, I don't know where you find the time to write such long blog posts, but I guess you are a writer as well as a photographer. My post shoot regime is pretty much the same as yours. I am at the point where I need a new camera, I've been a photographer for 24 years so i don't have camera envy as I have had many cameras over the years. I like reading your posts mainly because of your experiences, knowing their is someone out their dealing with the same issues as me, seeing that if I am not with clients or an assistant I am on my own. I like reading your tech stuff, although I'm not a tech junky, I let you do the testing for me. Anyway, thanks from Australia, Mark