I have this sinister little lens in the top drawer of the equipment case that's never been satisfying. I think it's because it's hard to get focused right. 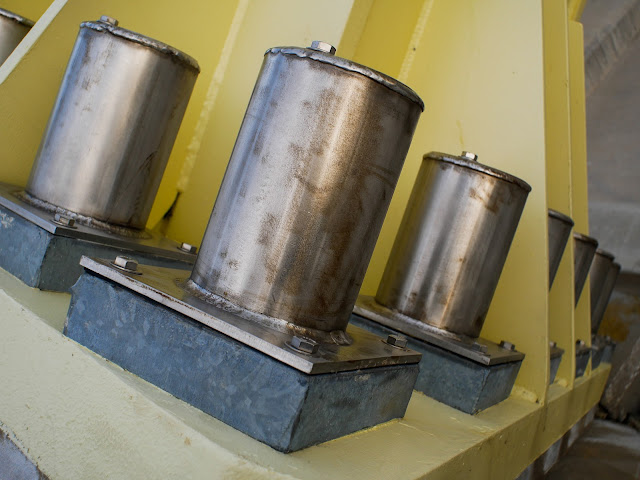 I've discussed many of the Olympus Pen FT half frame lenses that I enjoy using but I've mostly glossed over one. It's the 20mm f3.5. When I used it on its intended half frame Olympus film camera my results were always hit and miss. Mostly it looked soft and mushy. I had better options among the autofocus lenses that came along with each generation of m4:3 lenses. The poor 20mm just basically got side-lined.

But I am nothing if not persistent. I decided to give it one more try on the front of my favorite photo camera, the G85. The Olympus Pen FT 20mm lens is from about 1968 and was the widest focal length lens made for the half-frame cameras (which have a crop factor of 1.4 with ff 35mm and 2.0 with m4:3).

Each newer generation of Panasonic G cameras seems to be getting better and better at implementing focus peaking. And it's getting easier and easier to enable focus magnification while manual focusing.
This is all good for older, manual focusing lenses.

As I walked around and shot frame after frame with the G85+20mm f3.5 combo I came to realize just how tricky it was in the pre-EVF days to really focus a slow, wide lens accurately. The visual depth of field on a focusing screen seems to obscure the real limits of the "in focus boundaries."

No matter how much I love to romanticize older lenses there is a basic fact that their maximum aperture performance falls behind that of more modern lens options. With that in mind I mostly shot the lens at f5.6 since stopping down nearly always improves the performance of any older lens; up to a point.

When I returned to the studio to evaluate the lens' performance I noticed several things. First, the lens is not particularly sharp wide open and also shows some green and magenta fringing at tonal junction points. Stopping the lens down gains sharpness but it's the old fashion sort of sharpness formula that combines lots and lots of resolution but at a lower contrast and acutance than any modern lens. It's a good candidate for post production, with an emphasis on a good sharpening routine coupled with a liberal use of the clarity slider to add back contrast and edge snap.

Unlike software corrected wide angles of the present the lens is much better corrected for geometric corrections right out of the box. It had to be; there was no firmware correction available when it was designed and sold.

If you go into this lens with the idea of using it for substantive work you'll need to be comfortable shooting either at f5.6 or f8.0 with m4:3 cameras. Those are the sweet spot apertures for this lens. I should also note that it amply covers the APS-C format as it was originally designed to cover the wider (1.4x crop) area of the half frame film cameras. With a decent adapter and with the caveats I mentioned above it should work well on any of the Sony APS-C mirrorless cameras. It may even cover the full frame, but only at the closer focusing distances.

In all, I like the lens for photographs of people and may use it for something but I'm being progressively spoiled by the wide open clarity of lenses like the Olympus 12-100mm f4.0. It's harder now to rationalize using some of these older wide angles on the smaller format cameras when there are so many better modern alternatives. But it's fun to see that it's still highly usable on the latest cameras. Nice delayed obsolescence. 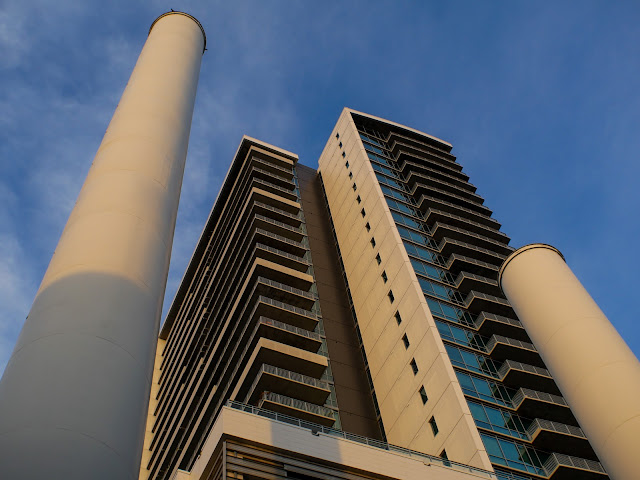 Posted by Kirk Tuck, Photographer/Writer at 10:34

On my recent trip to PVR all I took for camera equipment was my G85 and Panasonic 20mm f1.7 lens. I love the look this lens gives me and it's wickedly sharp. I did a lot of handheld night street shooting with this rig and was very happy. Street lights didn't flare out and the AF worked like a charm. Give one a try.

I am not one of those people who are always suggesting someone buy more gear. Having said that, if you like 20mm on m4/3 then, of course, there is the very nice Panasonic 20mm f1.7. I have had mine for about 6 years using it on the G3, E-M5, E-M10, E-M10II, and PEN-F. Currently I use it mostly on my E-M10II with the electronic shutter turned on. Nice, small package and a very nice lens, nice FL, and pretty fast. Not sure how much they cost in the States, but you might find a used one somewhere if you don't want to go new.

When the other pen lenses remain so remarkable after so many years of service, I guess conceptually there's the temptation to keep trying this one out in different ways too.
But yep, adapted wide lenses on m43 haven't ever clicked for me either.
Mark

Heheheh, the 20mm lumix is hands down my favourite lens on any system, ever. It is still the lens I use for the majority of my shooting and there is something about the way it renders an image that is magical. I third the other comments.
Mark

I like to use film-era lenses on my Fuji specifically for one reason you mentioned: most of them are are almost rectilinear. You do not need to use software to correct for barrel distortion or pincushion. Most of my experience is with Leica M 35 and 50mm Summicrons and Olympus-OM 50 micro and 35 shift lenses, all of which work very well. And the ancient 50mm f/2.0 Summitar lens makes files that "look" great; it is so much fun to use!

I always found I had to scale focus my 20mm f4 Nikkor, the viewfinder was no help most of the time. And an Olympus wide from that era, if it they were like my OM lenses were a little low contrast, the reason I sold them and bought Leica and Nikon. Probably much better on digital where that local contrast is not the issue it was on Tri-X and Plus-X